Well, today Ari is 4 years and 5 months old, so I am officially five months behind on this blog. Sigh.

Ari had been talking for a long time about wanting to have a birthday party with his friends from school, so we went ahead and invited all 20-something kids in his class, and of course their families too. Even one of Ari’s teachers came, with her son! Of course they didn’t all come, but I think there were about 50 people there, including the babies, and also including a few adult friends, such as my good friend from California who was visiting and had brought another friend with her. (They helped me out a ton with getting stuff transported and set up and taking care of Sam, who had a fever that day.)

It was a busy month, and I’d been sick too, and I’d put off making arrangements for far too long, but fortunately A. had arranged for a musician (actually two, The Alphabeticians), since the clowns Ari wanted were already booked, and he’d ordered a big, fancy cake from a local bakery, Jaciva’s. My good friend and neighbor helped me buy some cans of sparkling fruit juice and soda, juice boxes, and big water jugs. A few days before the party, I finally went out one evening and got plates, cups, napkins, plastic ware, tablecloths, and bubble wands from the dollar store and ordered some pizzas, which another friend of ours picked up and delivered to the party. I had paid $90 to reserve a picnic table area near the playground at Mt. Scott park, even though I think people usually just show up early and claim a table for free, because I wanted to be certain we would have the tables we wanted. We spent way more money than I ever would have thought was appropriate for a kid’s 4th birthday party, but it sure was fun to get together with everyone, and Ari had such a great time!

In the morning, I quickly strung up the misspelled banner I’ve had since I bought it for Ari’s first birthday party (it says “HAPPH BIRTHDAY”), and he opened his cards and presents (mostly books). 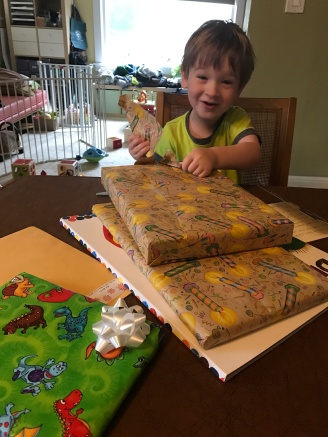 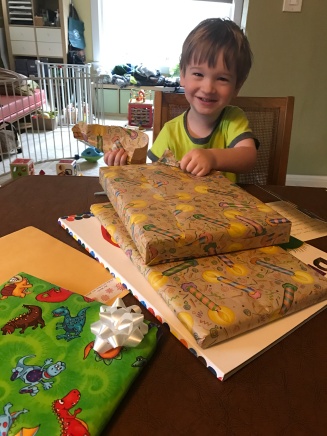 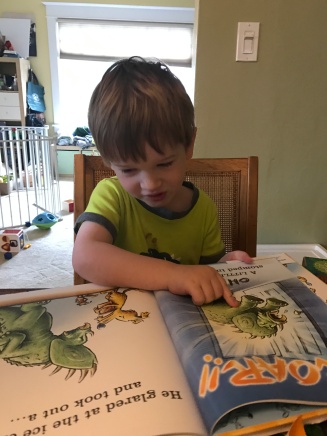 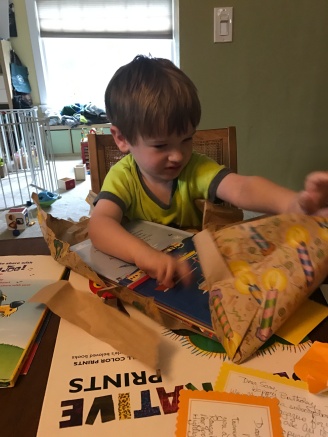 Then we went to the party! The musicians brought kazoos to sell and we just handed them out as party favors and paid for the whole container. Ari seemed to think that because it was his party, he was supposed to be part of the entertainment, so he stood with them and played his kazoo for the entire show! At one point, I asked him whether he wanted to dance with me or keep performing, and he said, “perform,” so I left him alone. There was also a point in the show when one of the musicians joked that they had come early and hidden air guitars around the park so people could find them and play them, and Ari took off, looking high and low very seriously. So I went and told him that it was a joke and an air guitar is an imaginary guitar, and he went right back to his kazoo! 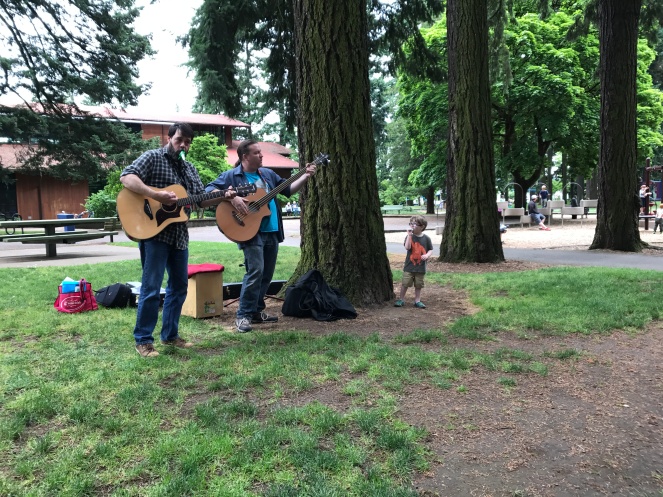 A really nice thing the musicians did was to write a song especially for Ari, using some personal information I gave them about things he likes. (For an extra fee, they would have gone into a recording studio and recorded it for us.)

The rest of the party was just pizza, kids playing at the playground, and cake. I tried to talk to some people but mostly I paced around fretting about whether everyone was happy and had what they needed, because that’s what I do. I didn’t even help Ari with his pizza, but I found him sitting and eating with another parent helping him! I felt enormous gratitude for our wonderful friends and school community.

The most stressful part, for me, was figuring out what to do about presents, because I certainly didn’t want to take home presents from that many people, and I didn’t want to devote a bunch of time to opening all those presents, and I wanted to avoid any awkwardness around how Ari reacted to each present. So we said presents were not necessary on the invitation. But then, of course, some people brought presents, and I felt awkward about wanting to make sure Ari opened and appreciated them without making anyone else feel bad about not bringing a present. I was going to have him sneak away with each person who had brought a present and open it privately, but what happened was that when people were starting to leave, the kids who’d brought presents all brought them to Ari to open pretty much at once, and he sat on the ground with a small circle of people around him. Since I was running around fretting about it, worrying about people feeling bad if they saw that happening or if they came to say goodbye while it was happening, I didn’t pay close enough attention to who brought what, so then when I wanted to make sure we thanked everyone, I didn’t know who had brought a present and who hadn’t, so I felt all awkward about our goodbyes! Sheesh.

But it was a good kind of awkward feeling, because it came from my feeling so much love and appreciation for everyone who was there! Still, that’s why I kept my wedding super small. I kind of lose my head and become consumed with worry and guilt at big parties, especially one for me.

I’ll close out this story with a picture my friend got of Ari and his cake, since I didn’t even have the presence of mind to take one myself! 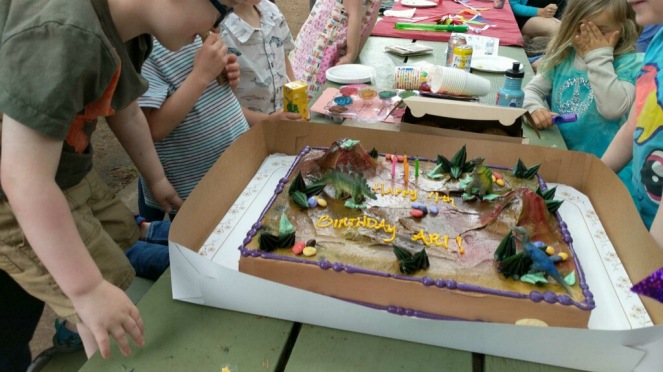 I love my happy, enthusiastic, friendly little performer so much!