Well, it’s been another week and I’m still pregnant! I get regular contractions around 11pm to midnight every night, but they always go away and I fall asleep. When I went to the doctor on Tuesday, she said I’m dilated to 3cm (I was disappointed there hasn’t been more progress) and that I should do squats, so I found a yoga and belly dance video with squats and cat/cow moves! I’ve done it a few times now and I think it’s a good one. I’ve also been going for late evening walks (enjoying our warm weather), doing yard work, cleaning the house, and taking naps. I have so many projects I could be working on and books I could be reading, but I just can’t concentrate!

Last weekend, we took Ari to a fair and he got to have several animal encounters. They had a petting zoo:

These weird things to ride on:

And pony rides! This was the first time since infancy that Ari has been on a horse or pony, and the very first time he has held on by himself. A. was walking along right next to him, though. 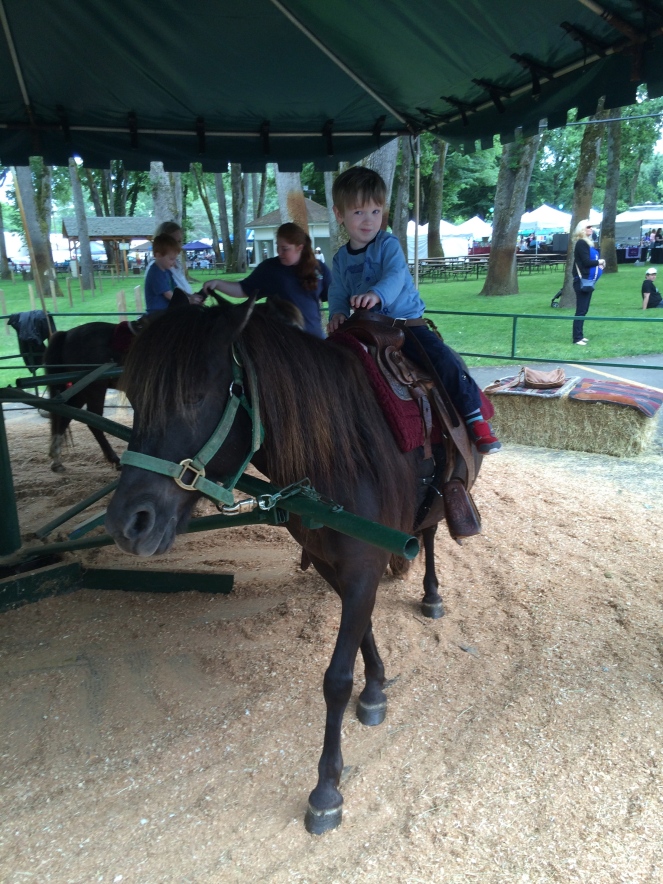 And a train ride! Ari sat in his own seat in front of A. and me.

There were camel rides, too, but the camels did not look well cared for and I didn’t want to support that little business. We did watch them for a while, though, and almost lost Ari under a camel’s feet when Ari ducked under the rope and ran toward the camel and I missed him the first time I reached for him, then I reached again and just barely snagged his shirt. That was a scary moment!

Here’s a belly photo from tonight: