Pics from Jan’s point-and-shoot at their new house:

I’m all screwed up with my titles – technically at the beginning of this week I was at “33 weeks” and this is my 34th week and I should call it Week 34. But whatever. Also, I wish the ticker on the right would say how many weeks and days are left, not how many months, because the way it rounds the months is ridiculous. I’m looking forward to seeing what it does when there is less than one month left!

Some Xanax, or at least some beer, would probably be very helpful for me now. I’m becoming compulsive with my lists and cataloging of Important Things. People on the internet have lots of things to say about what you need to do and buy before you have a baby, and how for the first days or weeks after having the baby you won’t be able to leave your nursing chair, much less the house. A. doesn’t get to take any time off work, so I picture myself on the couch with the baby, passing out from hunger and thirst because I didn’t prepare enough water bottles and snack packages, or maybe my water bottle fell off the table (what table? I still haven’t purchased an end table for my water and snacks!!) and rolled out of reach, and I forgot to set up my cell phone charger by the couch before I went into labor so my cell phone batteries have died and I can’t call anyone for help. Also the baby is lacerating his face with his fingernails because I didn’t get the right kind of baby nail clippers in time and he has cradle cap but I don’t have a baby hairbrush and he’s somehow being cute at the same time but my camera’s not handy. And I’m still trying to finish the breastfeeding book I got so that I will know how to feed him.

I didn’t feel like this a few weeks ago! I was going to be very calm and easygoing!!

It’s hard not knowing exactly WHEN “everything is going to change.” Maybe we only have three or four weeks to go, or maybe it’ll be another two months. People have been telling me I look “ready to pop” and I had one patient who was worried all night that I was going to go into labor if I did anything for him. I joke that I wouldn’t mind if I did right now, but the midwife reminded me that I want the baby to go home with me after he’s born, not to the NICU. I started following the June 2013 Birth Club Birth Announcements thread on BabyCenter.com, and it’s a good reminder of how important it is to go full term. At first the posts were these sad miscarriage announcements, then there were some people who had problems and delivered really early but their 1- and 2-pound babies survived in intensive care. Now the babies with the same due date as mine who are being born (usually after complicated pregnancies, it seems) weigh about four pounds and are mostly doing well but still having to spend a few weeks in the hospital.

I have a document on my computer that’s just called “lists” and that’s what it is, seven pages of one list after another. I was trying to discuss the lists with A. the other night but he ACTUALLY fell asleep and started snoring. But I still feel compelled to make a list of my lists: I have lists of music for labor and delivery, movies for labor and delivery (according to the celebrated midwife Ina May Gaskin, lowball comedies are the best), blog posts I intend to write, sleeping arrangements for our family trip in July, things to pack for our family trip in July, links for prenatal exercise videos on YouTube (totally unused), prenatal medical expenses, things to do before the baby is born to get ready, things to do during maternity leave (because taking care of a baby isn’t enough), things to pack for the hospital, things to put in the diaper bag, things to buy for the baby, things to do for the nursery, things to do at work before I leave, and the people and places I want to visit with the baby and when those visits might happen.

I was stung by a bee this week so I googled pregnancy and bee stings, and found an internet forum for beekeepers with a very paternalistic thread of men talking about what they would or wouldn’t “let” their beekeeper wives do while pregnant. It was funny – what a diverse world we live in!

Andrew has not been neglected. I have purchased an anti-pulling front-clip harness, which is working pretty well, a bag of training treats so we won’t run out for a while, some enzymatic dental chews, lots of poop bags, a soft frisbee toy, and a back-up supply of squeaky tennis balls.

I went out shopping and now I don’t have to panic anymore about the basic baby hygiene and safety supplies (except diapers, but I know those are easy to get anytime), or about clothing storage, as long as we don’t get him too many clothes.

Now I have baby nail clippers, nail scissors, AND nail files, plus a brush and comb, the oh-so-necessary bulb syringe, and a rectal thermometer, and a little bag to put them all in for easy transfer to the diaper bag (and a little basket for storage at home):

I found baskets that fit in the changing table, so maybe I don’t need a dresser yet? I put trash cans with lids next to it, maybe one for trash and one for diapers. 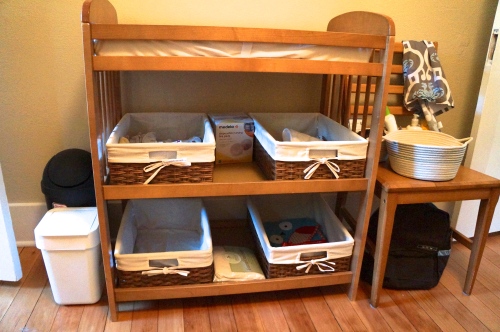 I put newborn-sized clothing into one basket:

Things for Messes (bibs, waterproof pads, burp cloths) will go in another basket:

Diaper things will go in the now empty basket on the bottom left and next to the changing table:

Maybe sheets and towels on the bottom right and in the extra spaces:

For now, I set up a basket for reading material for both of us – he can have a bookshelf later:

And a basket of blankets:

And we got gifts this week!

From my parents, a mobile for the crib! I finally got the right batteries and I especially like the jungle sound effects, but there are three classical music options as well. I think it’s very cheerful looking:

Here is a baby’s eye view: 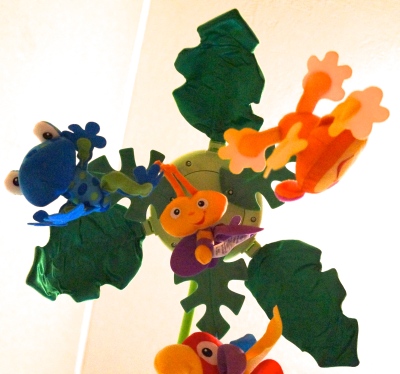 It also has a remote so we can turn it off from a distance:

I finally framed this picture from my mom, but I’m not yet sure where to hang it:

Great Auntie Lynn (heehee!) came to visit and brought this great bathtub and some bathing essentials: 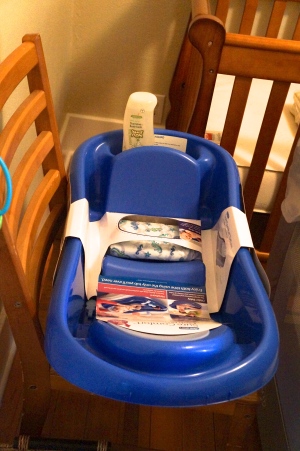 The tub fits perfectly in the kitchen sink, but we can use it anywhere: 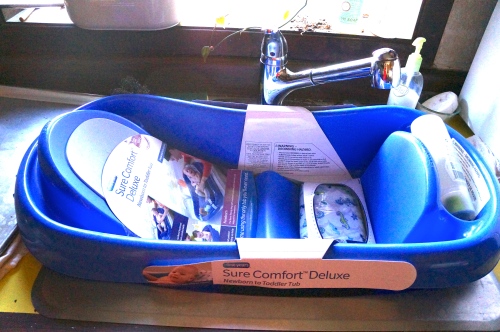 The wipes are going in the diaper bag! 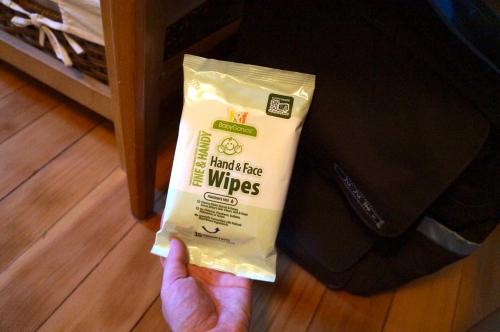 Our Reedie friends in Seattle, who are expecting their own son a couple weeks ahead of us, sent a care package with some nice items for me, a book (mostly for A.), a towel and washcloth, and some awesome baby clothes that will be perfect when he’s a little older (and the weather will be cooler then, too): 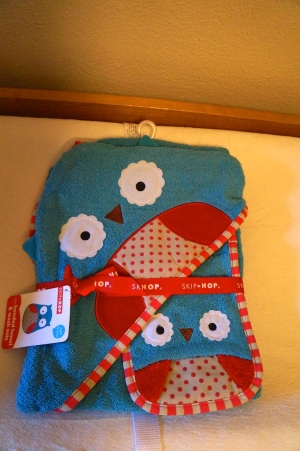 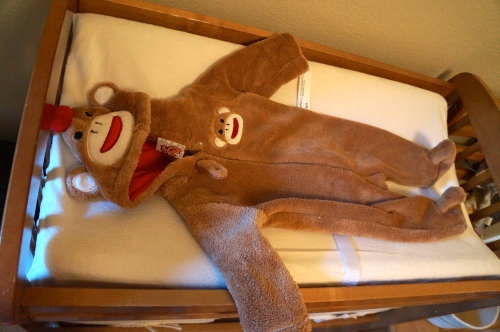 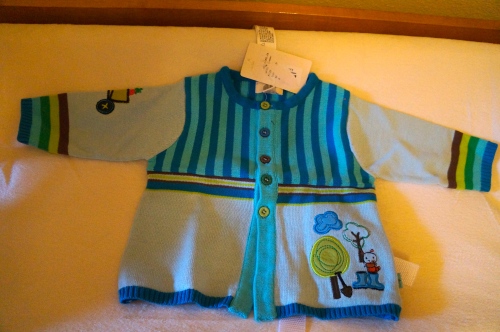 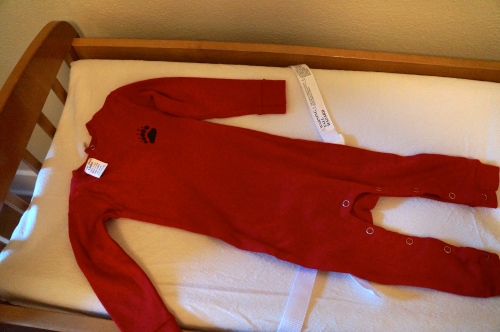 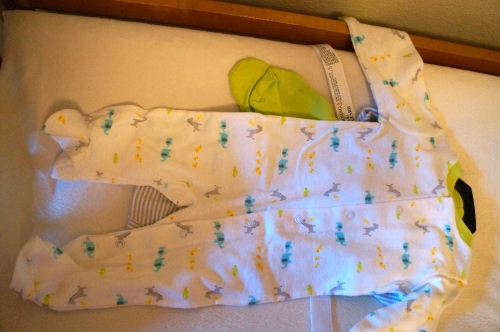 For now, the bigger clothes will be stored in the closet. I set up a little laundry basket, too.

So, are we ready?

This week we also did some barbecuing at Jan and Patrick’s. They’re just getting moved in, still, but they have a great deck for barbecuing! The food was great – fruit salad, green salad, grilled vegetables, guacamole, and marinated tofu skewers, and the guys had some hamburgers they ran out for when they realized it was shaping up to be a vegan barbecue! Also the dogs got to wrestle and race around for hours. Andrew was pretty excited about being allowed on the couch. (Also I cropped that picture to avoid showing any faces whose owners don’t want them shown…) 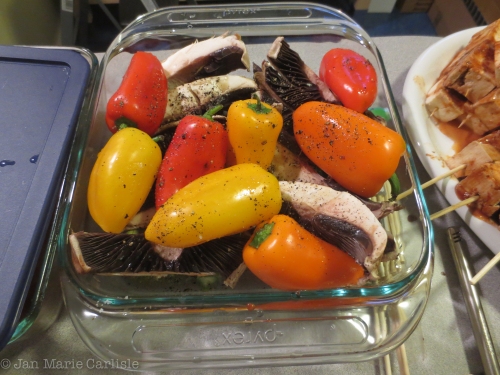 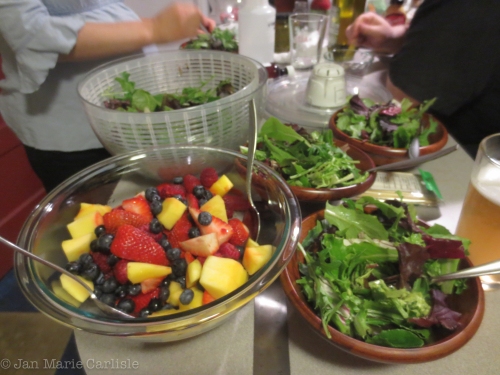 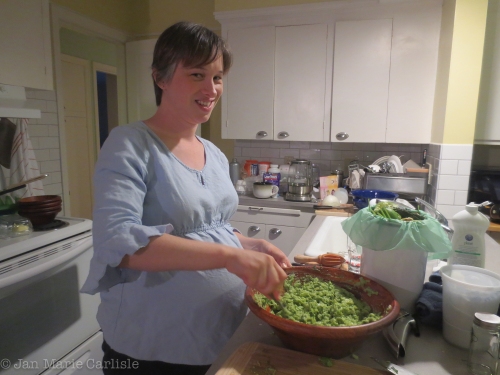 We took Andrew to the park on Friday evening and his two twins were there! Can you tell which one he is in these pictures?

Later on Friday night, we went bar hopping by bicycle! And played pool! Three things I didn’t think I could do…and I’m glad I did before we have to stay home with the baby! We didn’t bike too far, and didn’t do too much uphill because I had to take that part really slowly. But other than that it felt great! It was a nice reminder of how close we are to some good areas for eating and drinking and entertainment, especially on a bicycle. And I found things to drink – lemonade at the first place, then club soda, then hot tea. I had a hard time finding something to wear that I could bicycle in, but with the blue belly band my mom got for me, I was able to wear a non-maternity outfit. My “33 Weeks” picture at the top was taken after we got home. Here I am playing pool and on the bike: 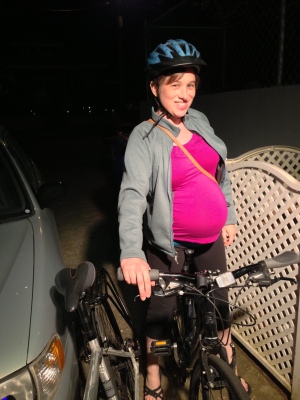 Before we went, I wanted some pregnant bicycling inspiration and I found this, which I love. Great pictures on that page!

Maybe getting more exercise outside – with this beautiful weather! – can substitute for alcohol and meds as an anxiety treatment. 🙂 It was really nice to have a date night; we haven’t done that in forever and we don’t even have a baby yet! After all, it is important to spend time together not just talking about baby and house stuff.