Ari and I got to do lots of socializing this week. We met with two neighborhood moms (separately) and their babies who are close to Ari’s age, trying out some of the baby-friendly places to go within walking distance. We also took Jan along to a “Mommy and Me Matinee” showing of Before Midnight. Ari’s first movie theater outing! It was fun to share the experience with other moms and babies. There was a little fussing from Ari and others, but not too much noise. We had a friend visiting for the long weekend, plus a visit from my aunt and her friend on Saturday night! We did more walking, hiking, and eating out, including a picnic at a winery (Ari’s second winery trip already!). Ari did a good job of either sleeping or being quietly awake when we were out, and even let me eat with two hands on at least one occasion!

This week, it felt like we might be working our way into a routine with less frequent feedings and longer naps, but Ari still has a hard time getting to sleep and continues to nurse to sleep in our bed at night. When I go back to work, not only does A. have to be able to get him to sleep, but I would also feel better if he were sleeping in the bassinet instead of in the bed, and neither of those things has happened yet! This next week, we’re going to make a more serious effort because it’s my last week of maternity leave!

It’s really hitting me how fast the time goes. Ari now weighs about 12 pounds and fits his 3-month-old clothes. He is getting better at holding and manipulating things with his hands, can now lift his whole chest off the floor during “tummy time,” and – big milestone! – has been rolling from his front to his back since the beginning of the week! He’s an infant but not a newborn anymore, and I don’t feel like a brand-new mom anymore either.

In one book I’m reading, Touchpoints: Birth to 3, the pediatrician and author T. Berry Brazelton says he thinks new mothers should stay home for at least the first four months, because it takes about three months for things to start to feel settled into new routines and for the parents and baby to get to know each other, and at three months it’s just starting to get fun. He would like for the mom to be able to enjoy a little of this time before returning to work. I can definitely see what he’s talking about! Just as we’re getting used to parenting we have to add some serious stress to our lives with me going back to work. And I’m considered lucky in this country to have 12 weeks off, with many women returning to work after just five or six weeks, especially if they weren’t able to work right up to the day their baby was born.

Well, here are some pictures!

This is an Ikea activity gym I got at the consignment store. He’s not too into it yet:

Jan took these pictures when we went to the movie:

I took this in the theater:

Having dinner with my aunt and her friend: 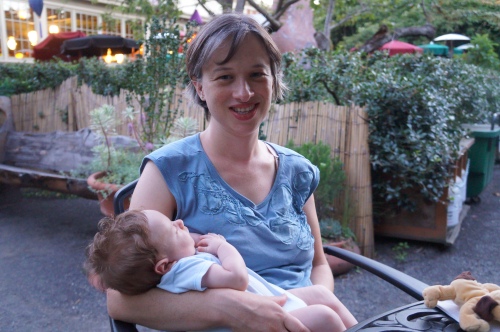 On the way to the winery – three adults, one baby, and a 60-pound dog in the car! 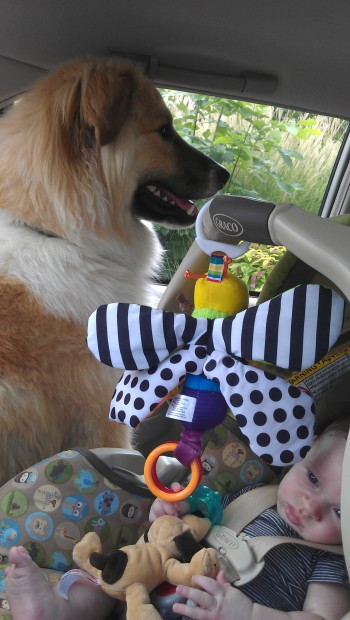 Breastfeeding at the winery: 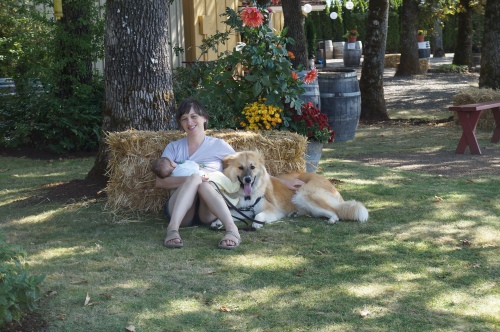 Ari is getting bigger in his bassinet:

Here he is with one of his new WubbaNub pacifier toys in his swing: