Last week, Ari had his MRI. The hardest part was getting the IV started. Actually, while we were in the waiting room, an absolutely distraught looking mom came back in with an empty stroller, crying, and I think it was just because of a difficult IV start. For Ari, they ended up knocking him out with a gas before they dug around for a vein too much. He came back with little holes all over his wrists, ankles, and inner elbows. Then they used the IV to sedate him for the MRI. After he went to sleep with the gas, I pumped, got us some food, then left the bottles with A. while I walked over to a work meeting. A. fed Ari after he woke up and I met them in the parking lot. Ari’s eyes were red and puffy from the ointment they used to keep them moist and from being taped shut while he was sedated, but he seemed to feel fine.

This morning, he had his pediatric opthalmology appointment. We found out the MRI was negative (nothing abnormal), and he does have a blonde fundus (back of the eye) but nothing else to indicate something like ocular albinism. He is far-sighted but that’s normal for his age, apparently (the doctor could tell this just by looking at his eyes, somehow). The doctor said he can see (obviously) but he seems to have trouble focusing and sometimes he uses his peripheral vision to look at things. This is probably why I feel like he doesn’t make eye contact and he smiles at me while looking at the top of my head. His visual ability is poor for his age, but it’s possible that he has delayed maturation and will eventually see normally. Or, he might have some impairment forever. The doctor thinks it’s a sensory impairment rather than a cognitive impairment, but it’s probably hard to tell yet. He also mentioned possibilities of delayed myelination (scary, could be associated with other cognitive delays) and rod and/or cone dystrophies that could show up later. We’re going to see him again in a few months. At that time, they might do an ERG (electroretinogram) to test his retinas – at this age, it would be abnormal anyway because the retinas are still developing. In the meantime, we should give him lots of “high contrast” images and faces to look at!

I showed him this video on YouTube today and he seemed to enjoy it!

Anyway, no matter what, I think he’s adorable and perfect. 🙂 Here he is in his new fleece jacket from the consignment shop and the hat that A.’s brother made him (how does it fit already?!):

Here he is interacting with his mirror and mobile: 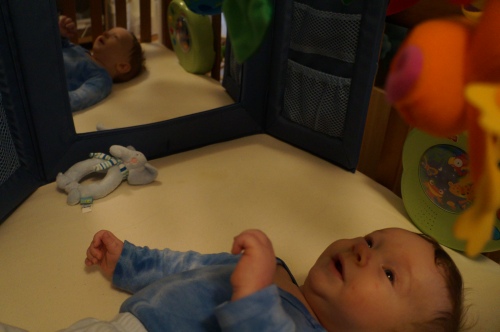 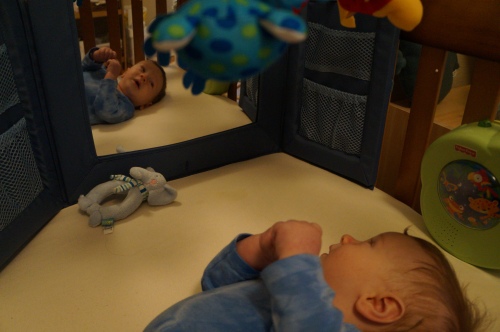 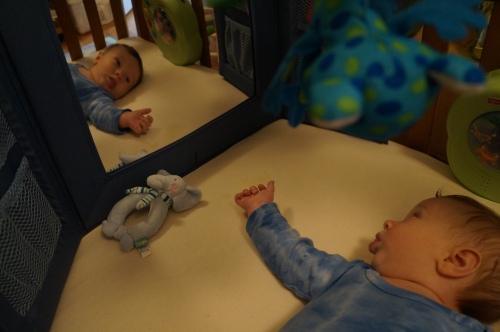 Here is Andrew keeping an eye on him while he plays with his activity gym:

Also this week: my birthday! It was a beautiful, sunny fall day. I took this picture of the city after work in the morning, with my cell phone: 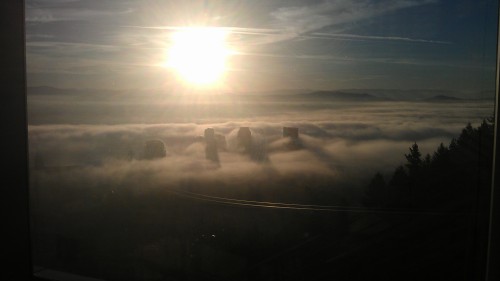 All my guys napped with me after work – here are two of them:

I wanted to do a corn maze and some farmy stuff, but I wasn’t feeling well so we made it a quick trip. 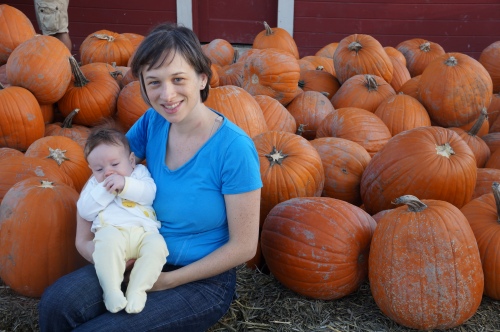 And today was weekly picture day! Ari mostly just wanted to chew his clothes, so I finally gave him a teething ring: 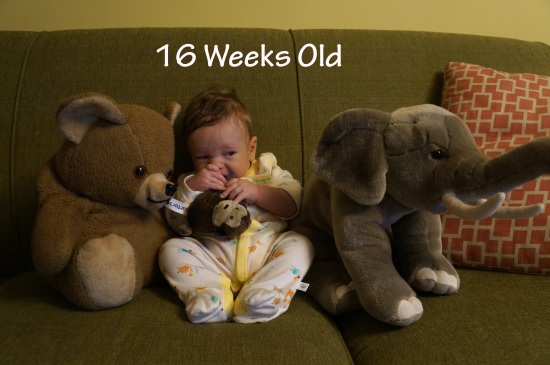