Wow, it’s been almost two weeks since my last post! Let’s see, in the last couple of weeks, A. had an overnight work trip to Atlanta and came back with a cold, then I got the cold and called out sick for most of my last night shift and my first day shifts, and Ari must have gotten the cold too because he had a fever for a couple of nights, up to 102.7, and has been sleeping a lot. But when he’s awake he’s a happy, busy little guy!

Currently Ari and A. are at their second baby swim class together. It’s their thing so I haven’t gone yet. It sounds like they do a lot of singing and playing the usual baby games but in the water.

We’ve been looking at daycares because I had decided Ari should have some social time. The waiting lists for the ones I like are LONG! But there’s one I think I really like – only a couple miles away, east of us, all natural stuff, a 3:1 infant to teacher ratio (and they’re in the “infant” classroom until 24 months), outside space, gardening, organic vegetarian food with the kids involved in the kitchen, etc. They will be opening a new infant room in September and it sounds like we have a good chance of getting in!

We toured another one with similar philosophies but it seemed so snobby and I felt judged by all the pregnant women getting their childcare sorted out early like I should have. I felt like everyone was annoyed by Ari’s squirming and babbling and they would have been disgusted if I’d offered him the pacifier or plastic rattle in my purse. The waiting list was too long for Ari’s age group anyway.

Also, I decided Ari’s still a baby and doesn’t necessarily need to socialize yet. I love the one-on-one play time he has with his nanny, and how she sings to him. Also when it’s nice out she takes him outside, and she’ll take him to book babies and baby Spanish group if he’s ever awake at the right times. (Yes, I found a baby Spanish group! It sounds like it’s intended for Spanish speakers to hang out with their babies but it turns out Ari’s nanny speaks Spanish! Then I mentioned sign language classes and it turns out she knows sign language too. I told her she should advertise these things!) Plus the nanny cooks for us and does laundry and lets Andrew out and in all day. Having her means we don’t have to arrange our schedules and transportation to get Ari and to and from daycare, and we don’t have to hire a dog walker for the long days. It’s a little more expensive than daycare, but I think she’s worth it!

I’ve had enough time over the past couple of weeks to find more things to stress out about, and one of them is how to introduce solids without losing my milk supply and fully weaning him early! He LOVES eating – so far his favorite is the oat cereal, then the vegetables, like greens and potato purees and squash and carrots and sweet potatoes, then fruits. For some reason he doesn’t seem too excited about fruit, except apple slices as a finger food to teethe on. I’ve tried giving him small pieces of banana and avocado but he just plays with them and smooshes them and doesn’t eat them. We gave him some cut up pieces of cooked spinach and he ate every bite, then a couple days later the entire pieces showed up in his poop. 🙂

In his poop ON THE POTTY, actually! He’s still regularly using his potty. Often his diapers are still dry after a couple of hours and then he’ll go right away on the potty. Most of his poops (he only has one every day or two) are on the potty. This makes using cloth diapers muuuuuch easier, too. Now that I’m awake during the day with him more, I’m trying to use the cloth diapers.

But back to food. If we did Baby Led Weaning (google it!), which doesn’t involve purees so they don’t eat as much, he would probably rely on breastmilk more. The breastfeeding people advocate breastfeeding for two years or longer. My breastfeeding book by the American Academy of Pediatricians says he should mostly breastfeed for nutrition during the first year, also. So we’re supposed to limit him to one or two non-milk feedings a day, and feed him breastmilk first so he’ll fill up on that. So I still need to be a slave to the pump at work for a while! I love breastfeeding but I hate pumping, so I’m both sad and excited about the prospect of weaning. Anyway, we’re not there yet. Even if he is looking more and more like a little boy instead of a little baby!

Oh, one more development – he’s been army crawling and scooting around for a couple of weeks now! He heads straight for cords, shoes, cell phones, the edges of rugs, which he likes to chew on, and the edge of the bed. Ignores all his toys. How do people live with crawling babies?? We REALLY need to baby-proof our house!! At least A. and his dad installed some magnetic locks on the cabinet under the kitchen sink where we keep cleaning supplies, and I rearranged our bathroom storage to put cleaning supplies up high. Except the toilet brush. What do you do with that? I don’t want it anywhere in the house besides next to the toilet; it’s filthy. But I don’t want Ari chewing on it either. Obviously. Suggestions?

Here’s the big little guy getting a new angle on his IKEA activity gym: 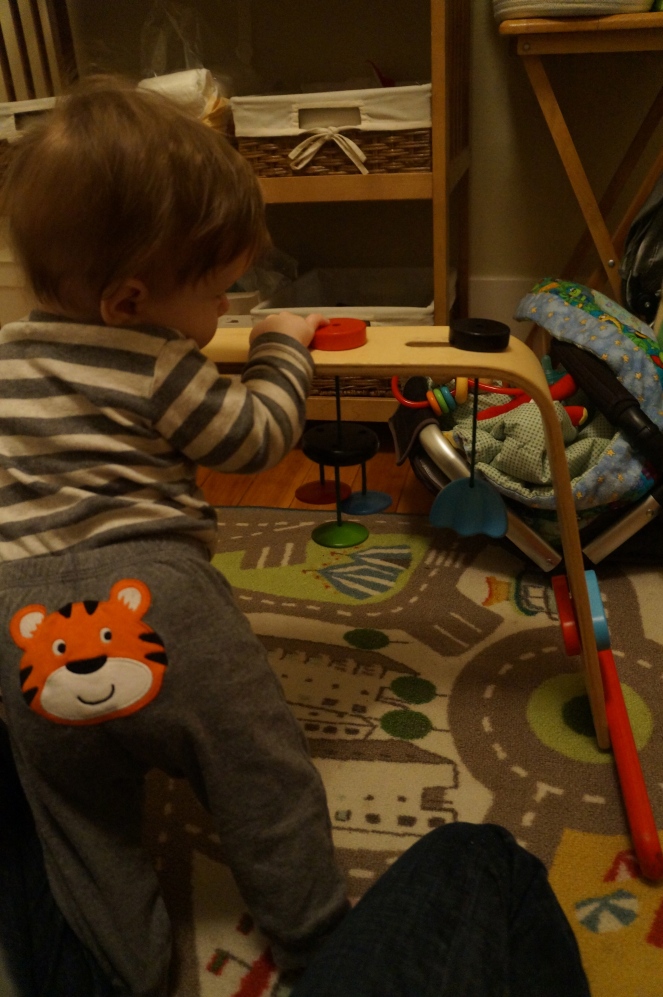 Sucking on an apple slice: 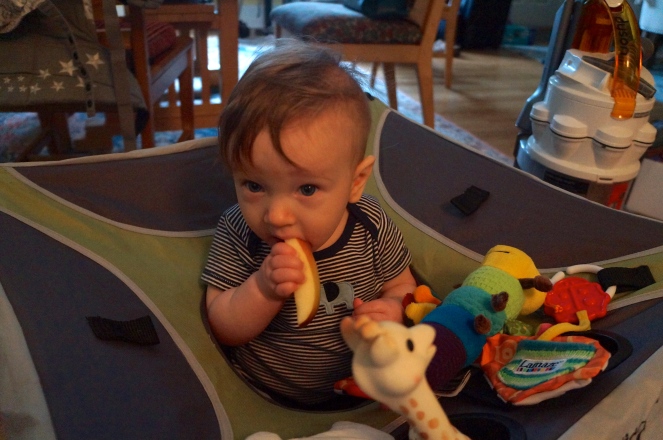 And again (it keeps him busy so I can eat): 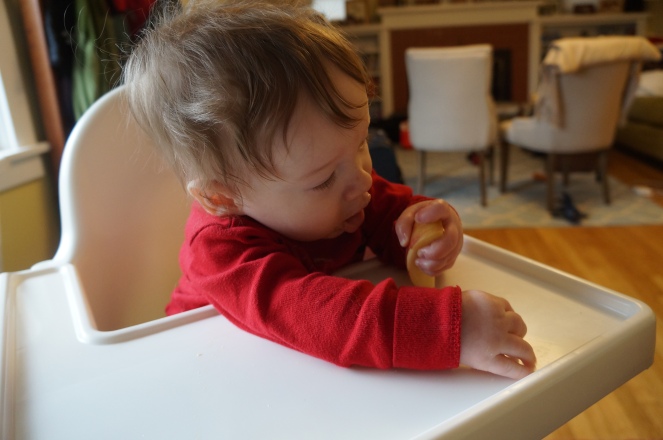 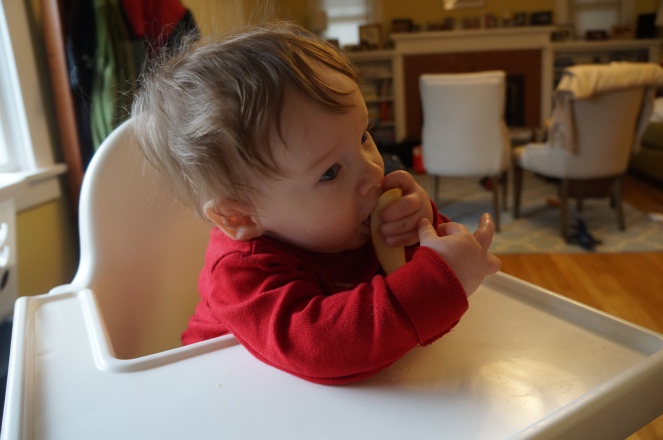 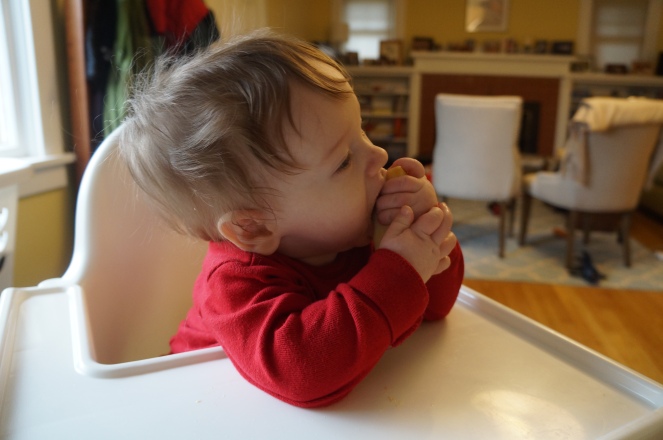 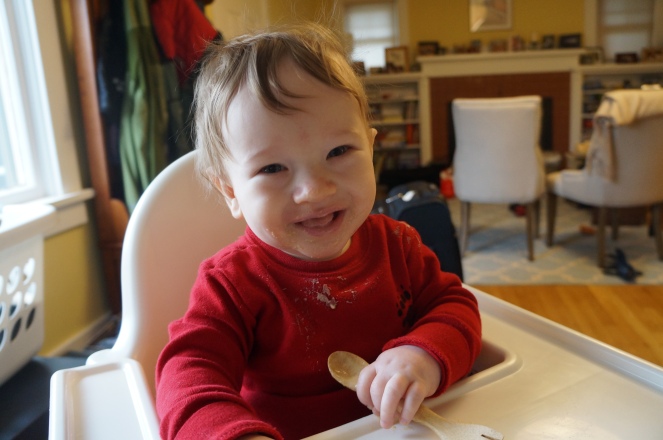 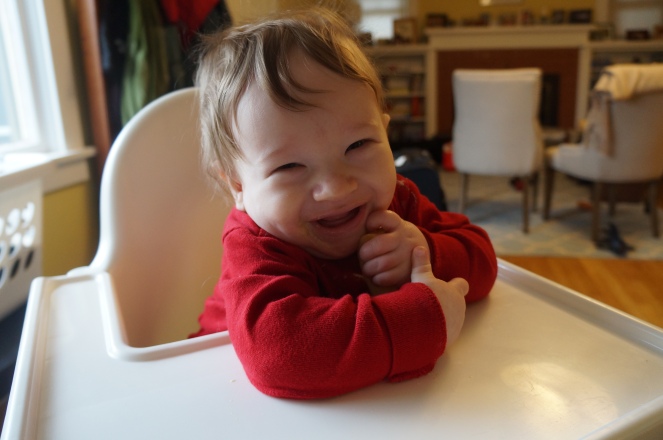 Cuddling with Daddy when he was sick:

Playing with this new toy from my parents (purchased at Costco; it’s great!): 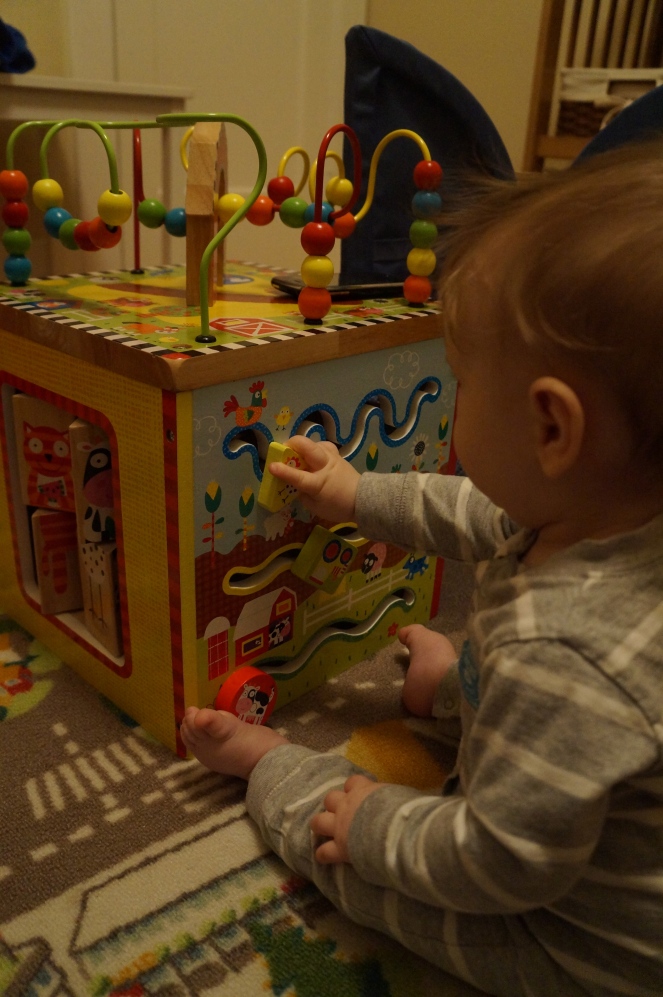 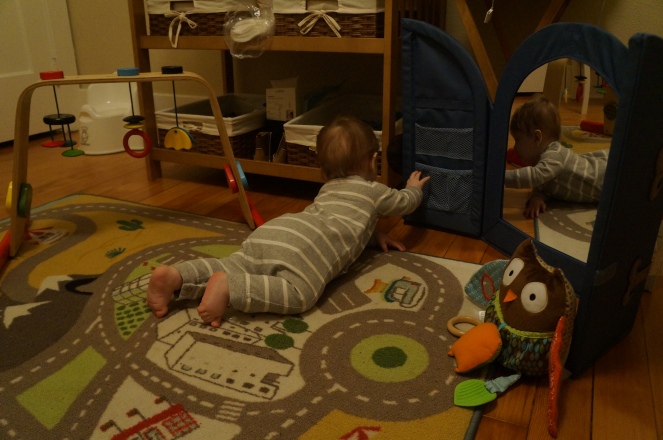 Back to the activity gym:

At the grocery store with his nanny:

Checking himself out (the nanny’s dog is in the second photo – he LOVES Ari):

This next picture was taken by his nanny while I was working my first day shift yesterday. (What to say about that? I had a busy group, it was fun to be there during the day and collaborate with doctors and other care providers more and not worry about waking people up, but it was also very busy and hard to pump and eat – of course it was just as hard for me on nights, but it’s more important that I pump during the day – yesterday I pumped at 6:45am before my shift started, then around 1pm, then not again until 6:30pm, and I also took about 5-10 min. to eat – then I had to stay late charting so it was a 15-hr day!) 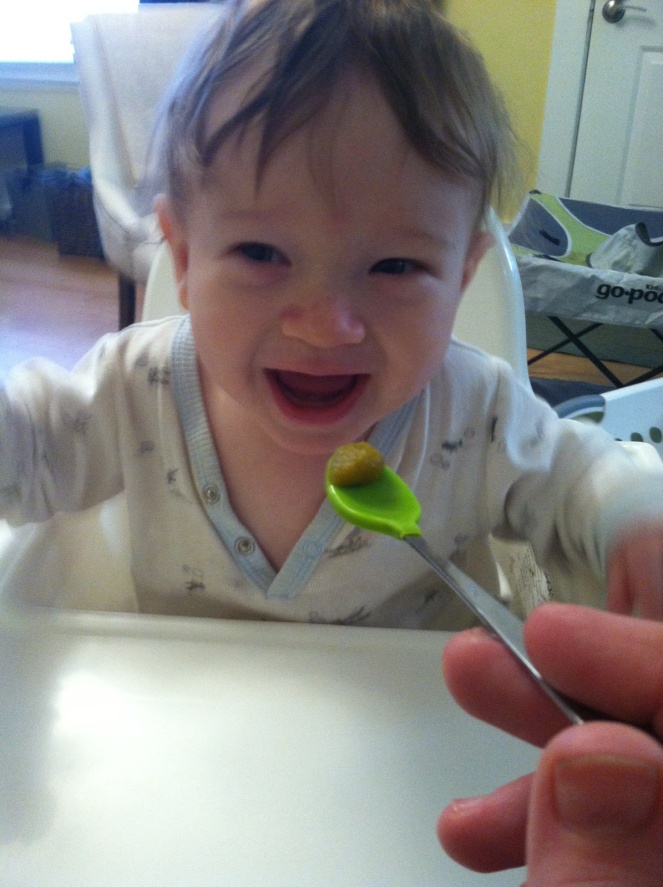 Here he is making a cute face this morning:

I love our little guy! He still lets me rock him to sleep on my chest, him sucking his thumb with his head tucked under my chin. I should probably be having him put himself to sleep but it’s my favorite thing in the world right now!

To steal a nickname from the nanny – happy seven months, Ari-bean!