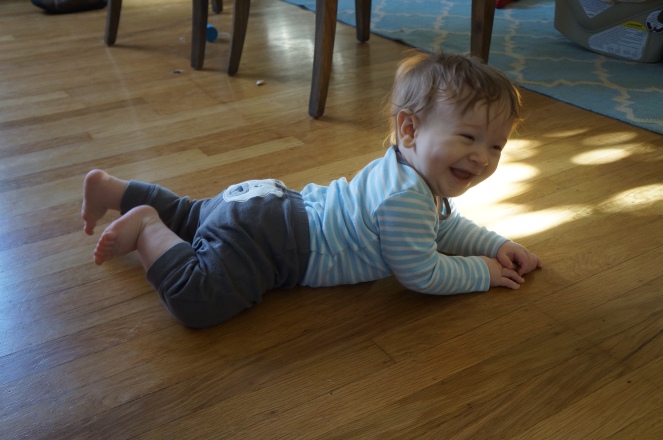 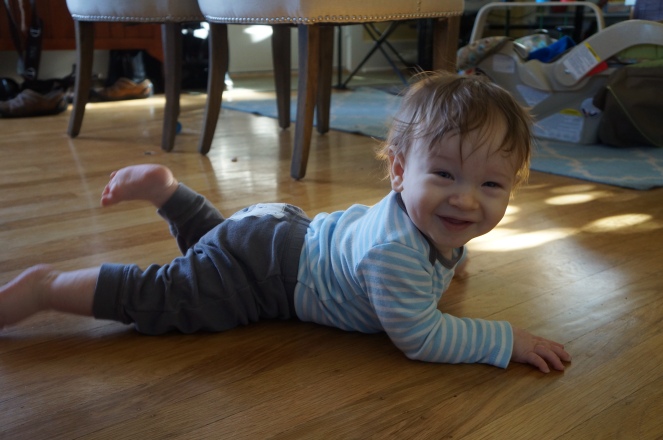 We had a fun day when Jan from Artless Articles came over with Baker and it was sunny so we spent some time outside. The dogs had a blast.

We went to the library for Book Babies but it was really crowded so we played in the children’s book area until a few people had left. Ari got to play with a toy very much like the one he has at home. Jan found a cute book of Yiddish words, too. She took these pictures: 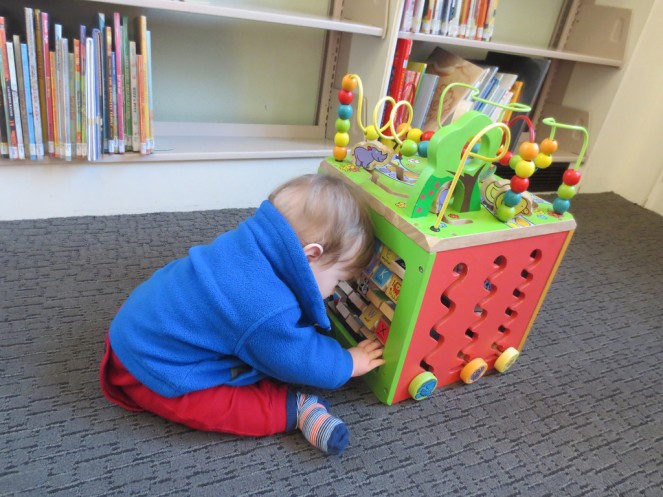 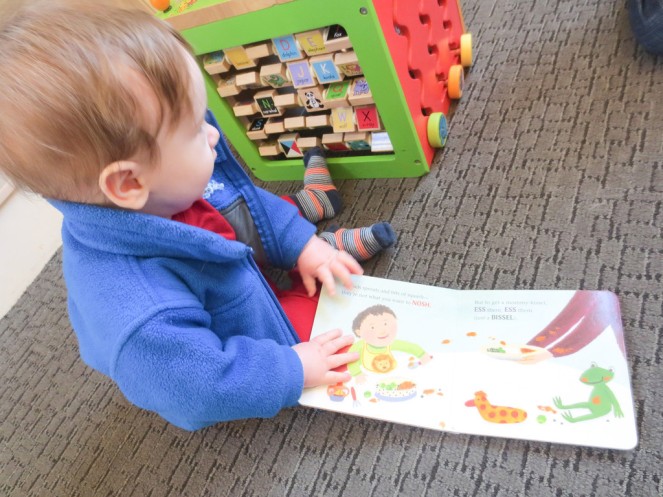 We went to New Seasons to buy ingredients to make vegan chili together (it’s great with the chipotle black bean burritos I get at Costco crumbled up in it instead of meat). When Ari got tired of the baby seat, he sat in the cart for a little while. 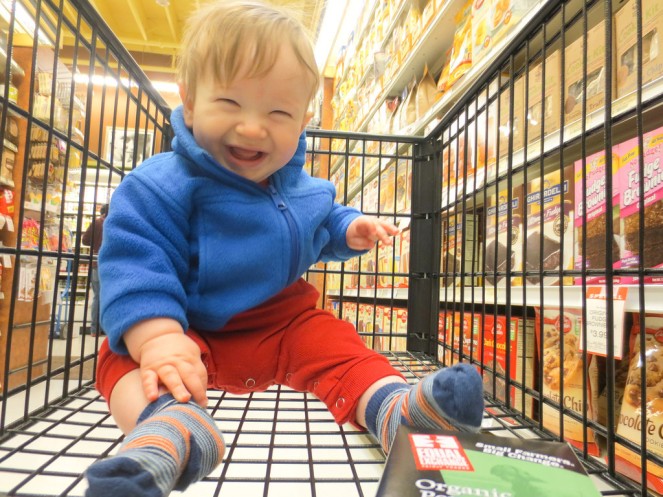 It was fun to make chili together! Basically I held Ari while Jan made chili in our kitchen and then I got to eat and keep some. Well, we took turns holding and entertaining Ari. It’s great to have two adults around when you’re trying to get stuff done with a baby!

Later, I walked into Ari’s room and A. had him in there standing in his crib like this: 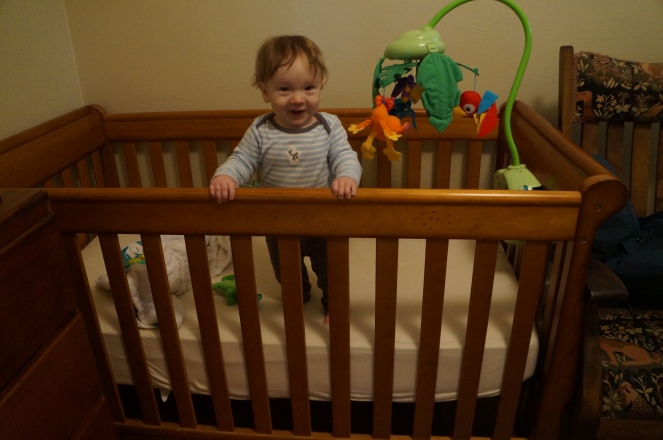 I couldn’t believe it, and he said he does it all the time! He doesn’t pull himself up but he stands there if you put him there. The other day, we finally lowered the mattress. We skipped the middle stage and just put it all the way down!

Here is Ari getting more of that screen time he’s not supposed to have. He loves his daddy’s laptop!

I made some changes in Ari’s room to make it safer and more friendly for him to crawl around and get to his toys. Then I decided it should be brighter so I let A. cut down some of the thick, ancient rhody plant (all green, I think just one bloom last summer) outside his window. We’ll uproot the rest of it later and plant something else in that nice sunny spot. I was resisting getting rid of it because I hate killing plants and because a lot of birds live in it during the warmer months, but I really don’t like having to have the light on all the time in this room even when it’s bright and sunny outside and there is this big south-facing window. Nothing obstructs the window in the closet and it’s really bright in there!

I love when I take photos and first Ari looks up with a serious face, then he grins, then he goes back to doing his thing: 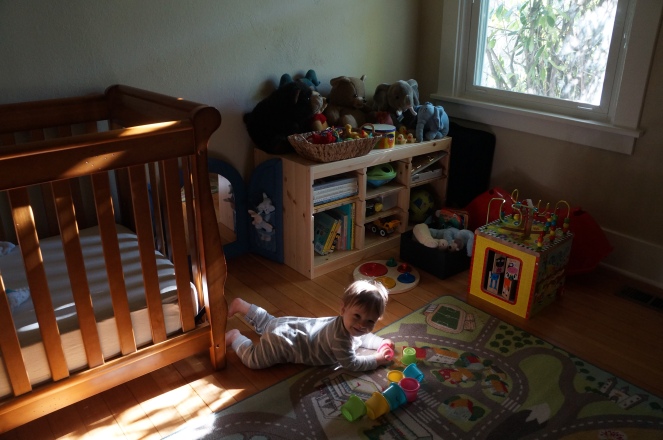 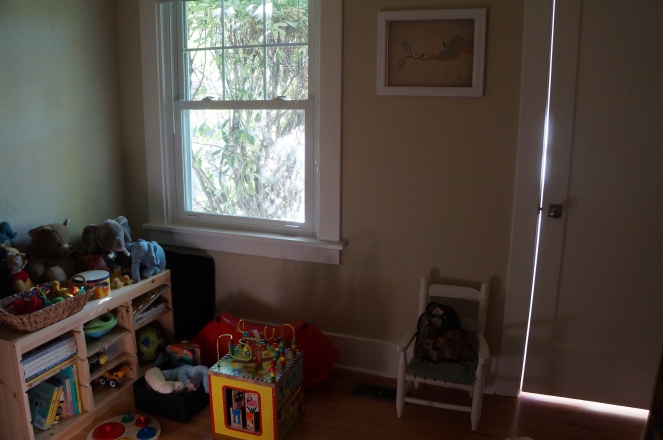 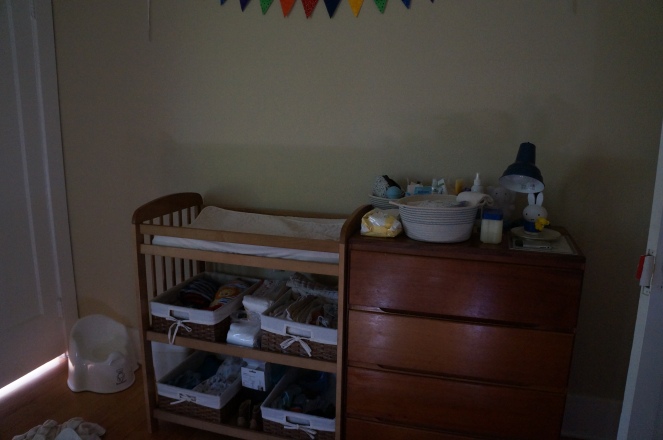 Labels to help people besides me put his laundry away:

Ari in the sun! He LOVES these little stacking cups. Mostly he seems to like banging them on things.

He also likes this circle puzzle, but mostly for chewing on:

Here is A. cutting branches outside the window:

This south-facing window in our living room now lets more light in, too:

Later, I found my three A’s (my A team!) enjoying the sunlight together: 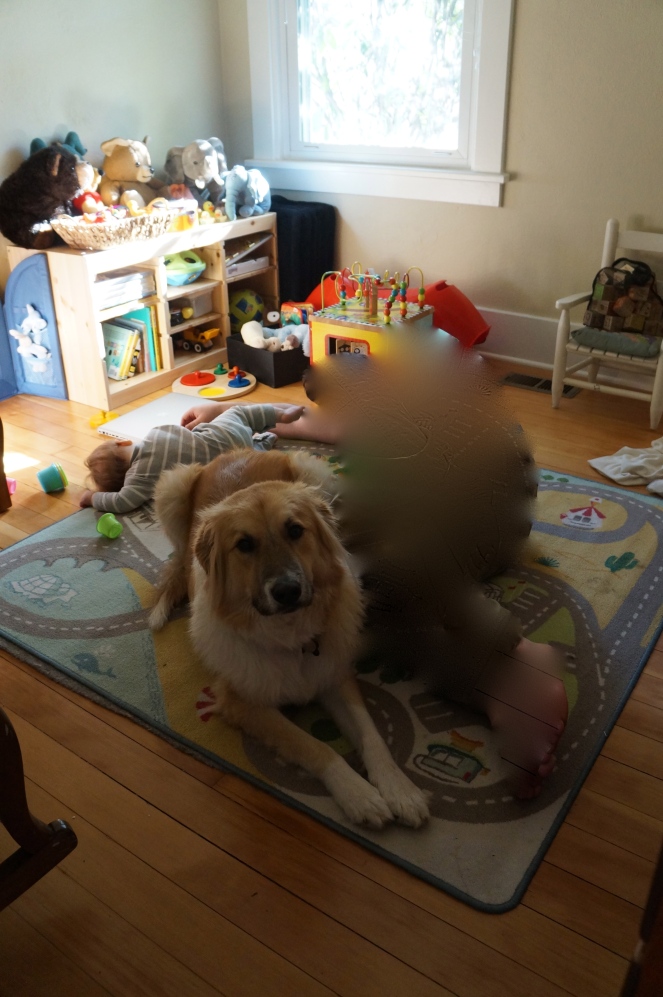 Aside from those fun events, we’ve been pretty pitiful around here. As soon as we were getting over our first round of colds we all seemed to get hit with another one. Ari has his first runny nose!

Another first for Ari: the jagged top edge of his first tooth broke through! I think that was on Jan. 23rd. 31 1/2 weeks. It’s a bottom front tooth.

What else is new? He’s kind of waving bye sometimes! A.’s mom has been working on that with him.

We went to a girls and babies birthday party where Ari played with three other babies. They were 8 months, 14 months, and 19 months. It was really cute but I feel bad because he had his runny nose and now I’m afraid the other babies will get sick! One of the older ones was kissing him and he and the younger one were smearing their faces together, poking each other’s eyes and mouths, and pulling each other’s hair. It was really sweet how interested in each other they were!

We just got a package of food prep things my mom ordered, so I can make some baby food, yay!

And Ari loves this light-up, musical toy A.’s dad got him. He’s just figured out how to push the buttons to make it play music. 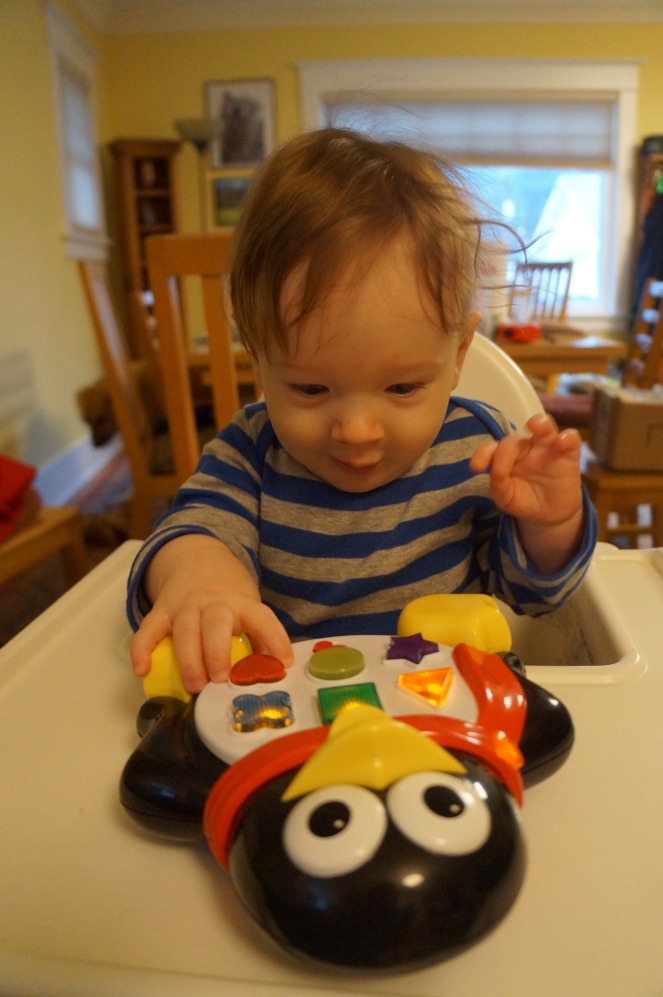 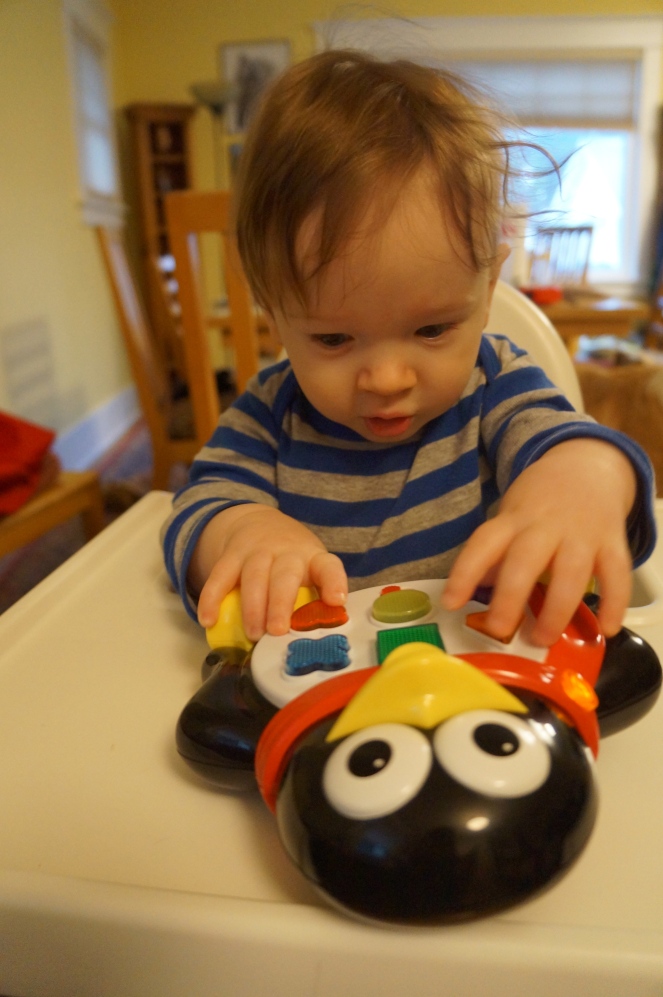 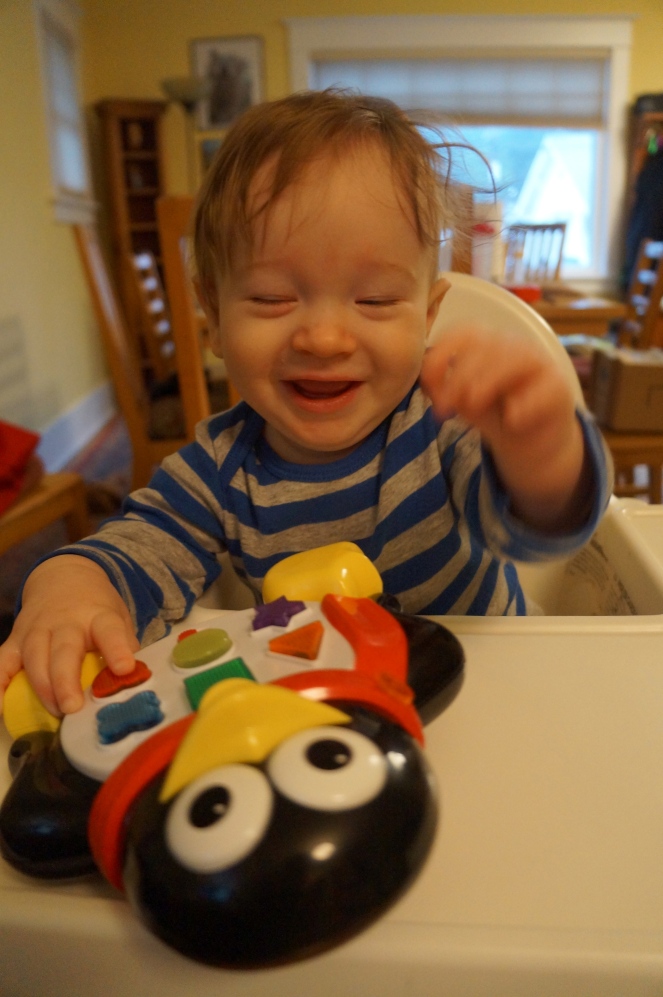 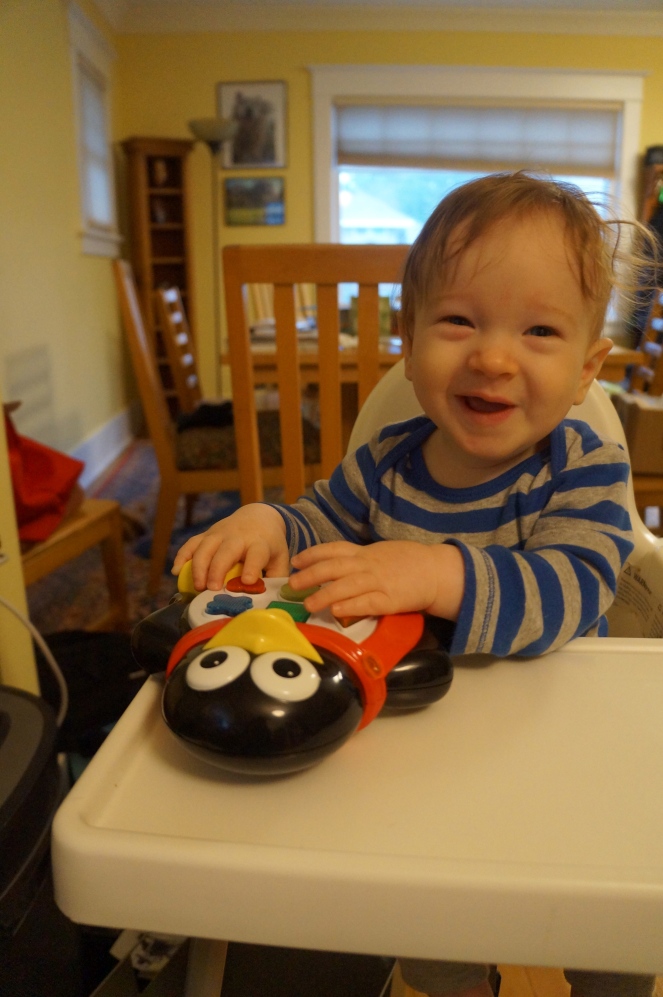