I was at work most of the first half of this past week, so I don’t really know what Ari was doing, except that he had a fever for a couple of days while I was working and he was keeping me up at night doing some intense teething (it looks like about three new teeth have erupted!).

But I got Memorial Day weekend off, as did A., so we had a very nice and much-needed family weekend!

First, on Friday, Ari and I and a friend had lunch at Café au Play, where babies can play with toys on the floor while the grown-ups eat!

Or they can play outside. Ari says, “Cool, a shovel!” 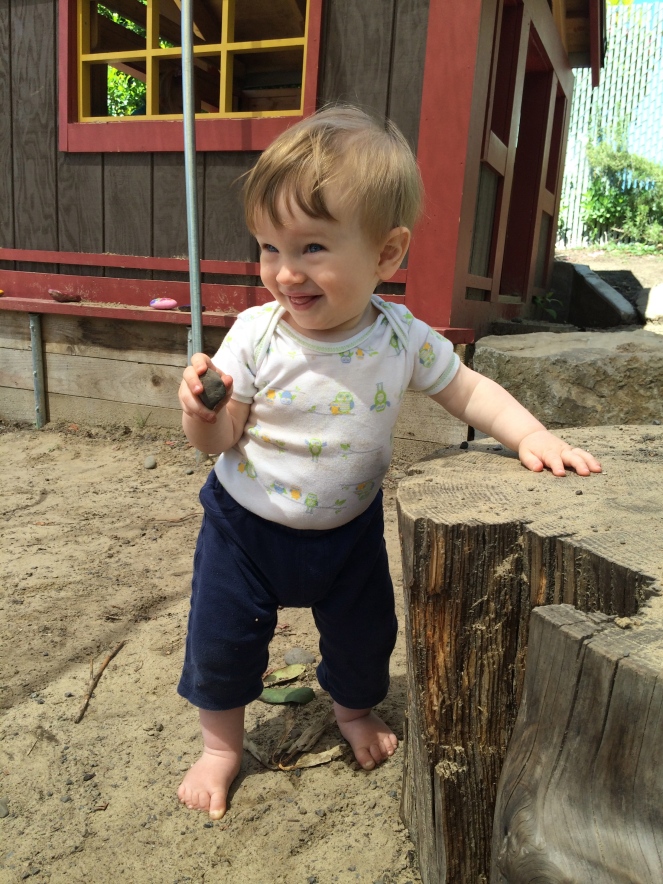 And lots of toys at home… 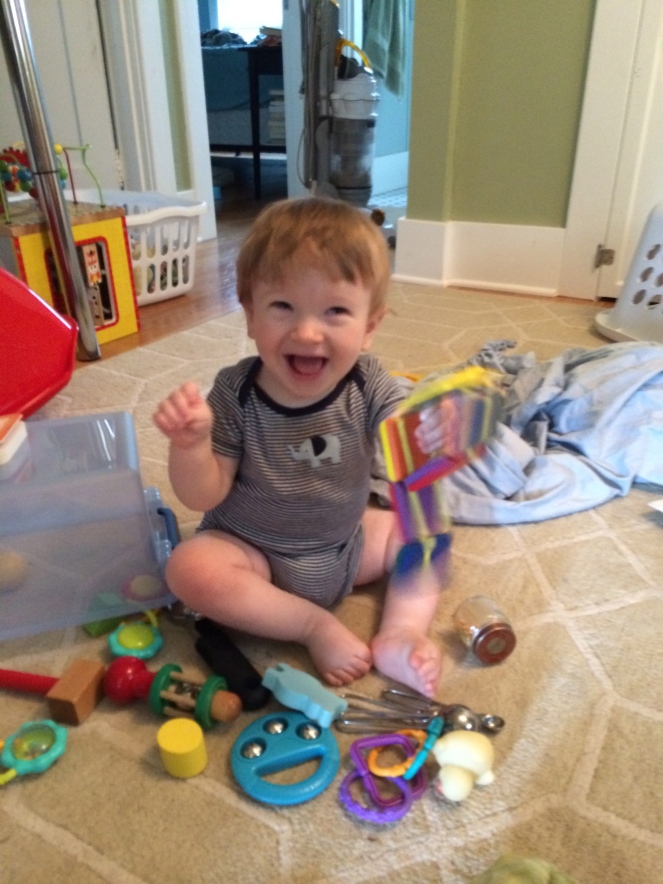 So, the other day I found this set-up in Ari’s room…coincidence? 😛 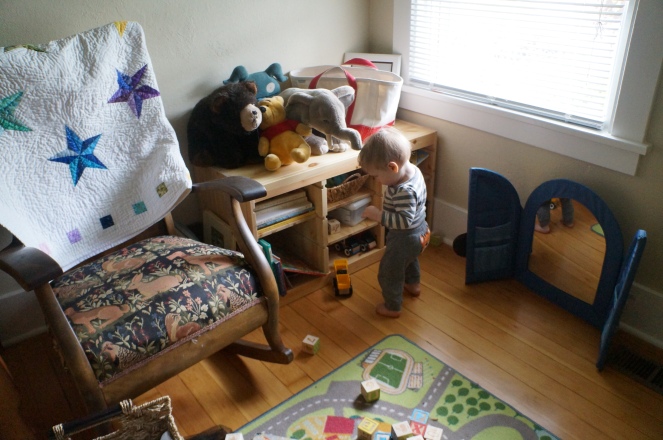 A. always wants to do as much bike riding as possible on the weekends, and we were both thrilled when Ari was finally old enough that we could bike with him in his bike trailer. However, the bike trailer is pretty cumbersome for urban biking and we haven’t been able to figure out how to lock it outside of places. Since I was pregnant, I’ve thought about getting something like this because I see people going up and down the street here with them and it looks like so much fun for the kids. But A. and I also separately had our eyes on the Yepp Mini, so on Saturday we biked to REI downtown with the trailer and bought one! We also had to buy a $35 adapter to make it fit my bike (and I think we’re getting another adapter so it will fit Alan’s bike, too – not sure what kind of bike you would need to have in order to NOT need the adapter…). Anyway, here is Ari in the seat! He had a blast Saturday evening and Sunday when we rode around with him.

You can see in the next couple of pictures that it’s kind of a stretch for me to reach the handlebars around the seat. The top of the seat hits me in the chest and Ari’s head is already right under my chin – there might not be much room to grow. Also, I have to ride a little bowlegged to avoid hitting my knees. I think it’s designed for Dutch-style cruiser bikes with wraparound handlebars. It seems like the iBert that I originally wanted might be easier to use. But I’m still having so much fun with this that I don’t want to return it! 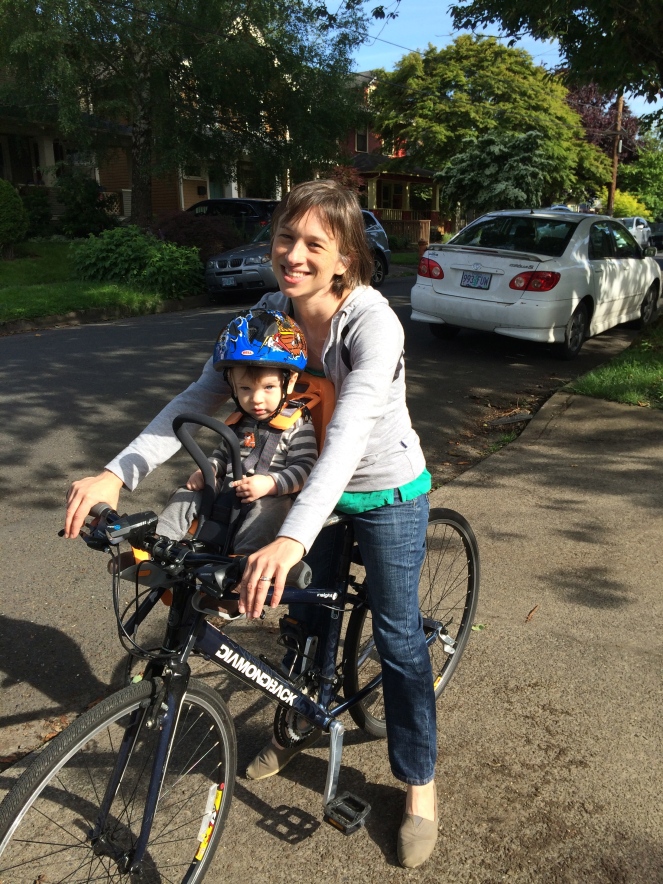 We rode to the park on Saturday evening. Look how far away Ari will sit from us – is that weird? 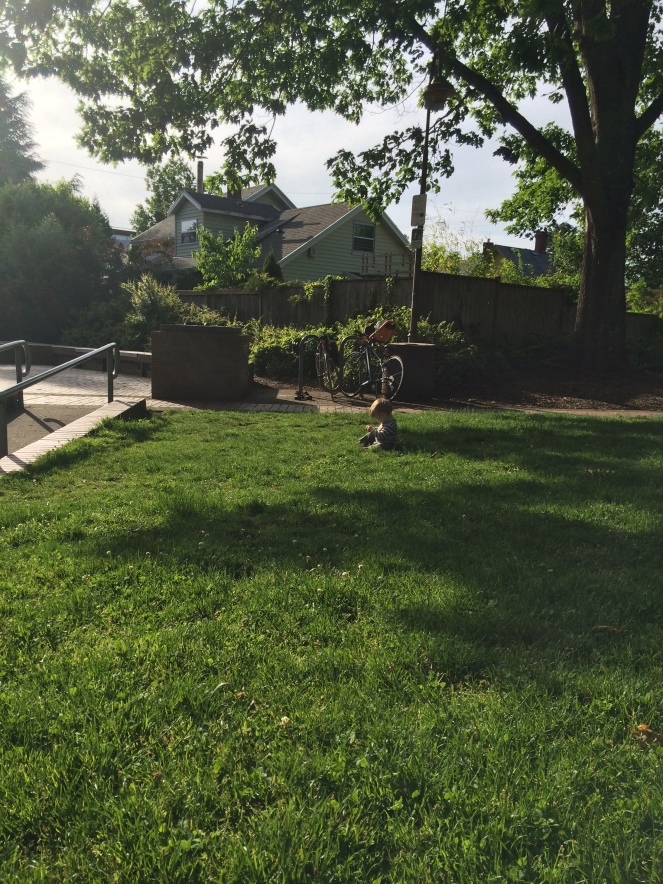 He climbed down this step to find a good clump of dirt to play with: 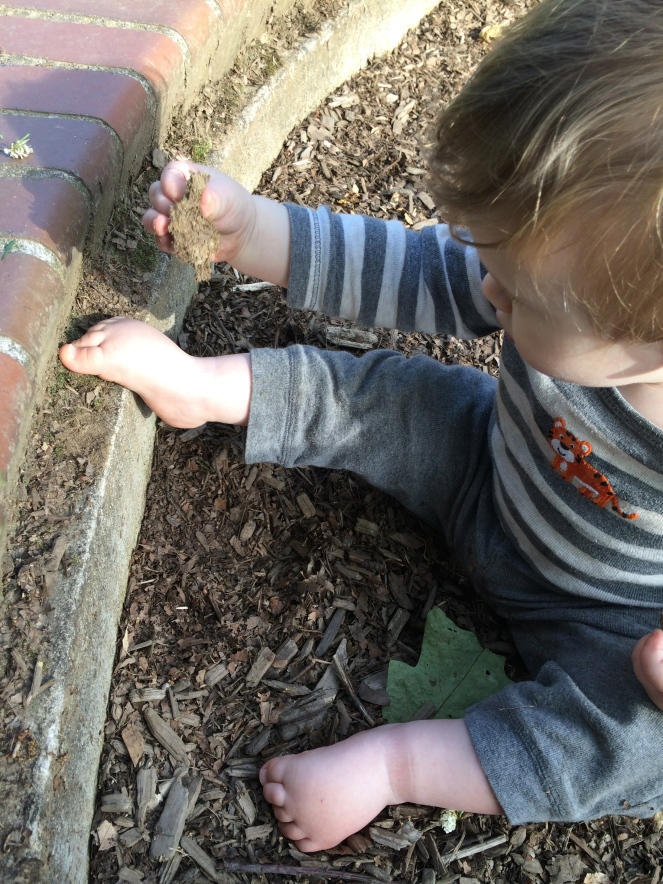 Fun on the slide…

Playing with Andrew in the yard – I’m very careful about these interactions with Andrew’s toys, and I quickly separate them if I sense any tension, but Andrew seems to be getting more relaxed. He seems to realize that Ari will give the ball back to him, and he takes it from him very carefully when Ari holds it out. 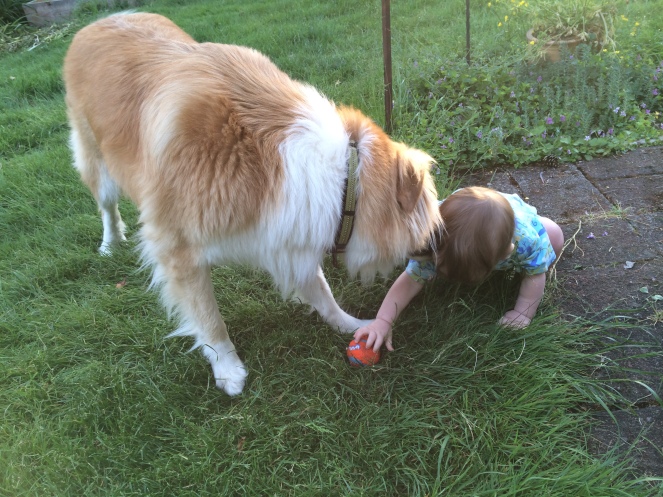 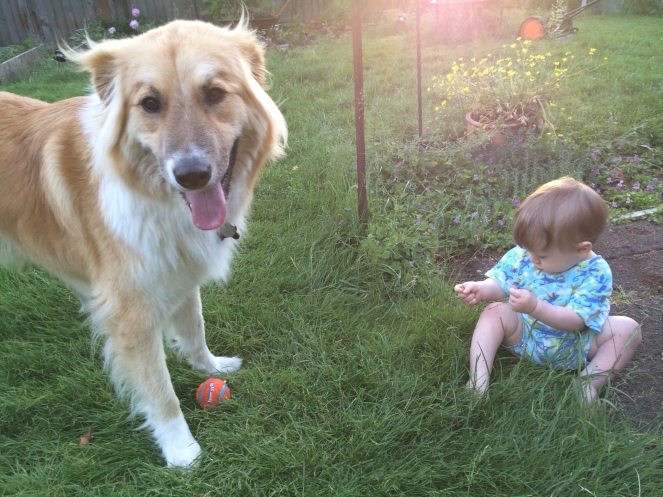 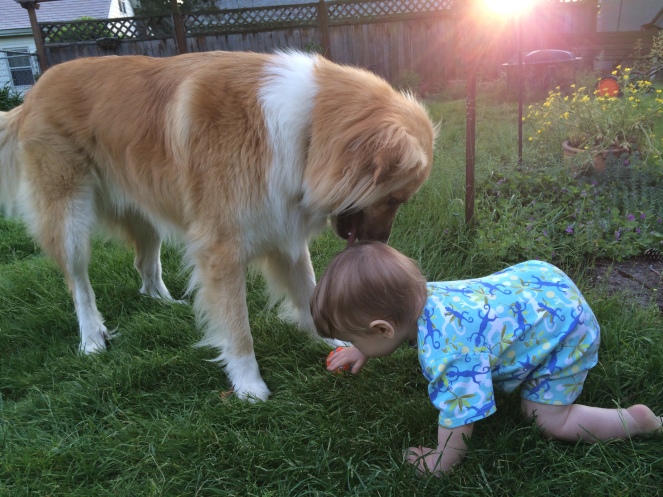 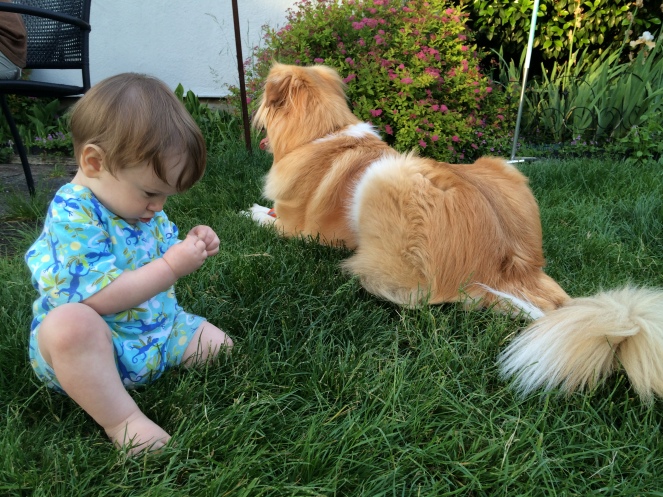 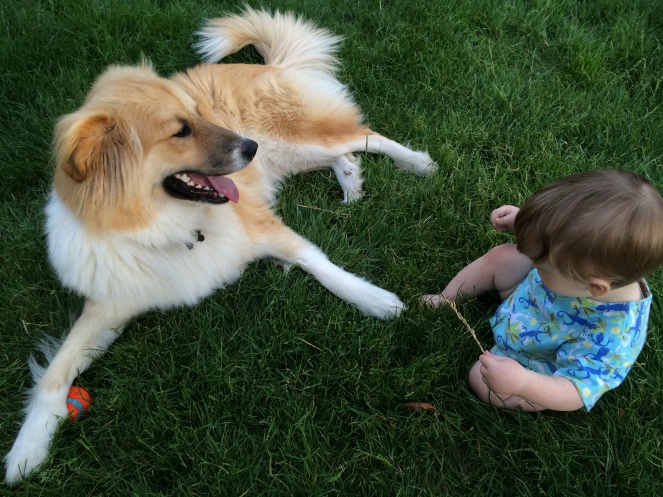 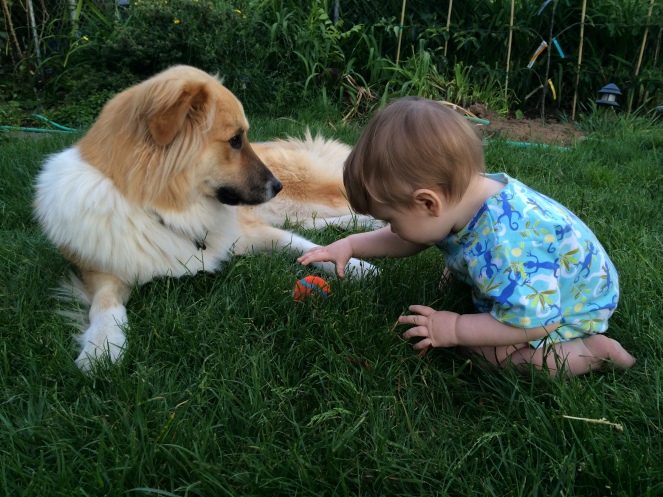 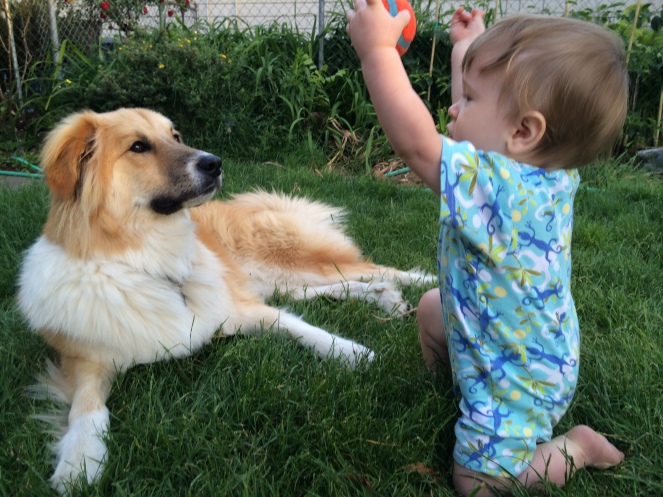 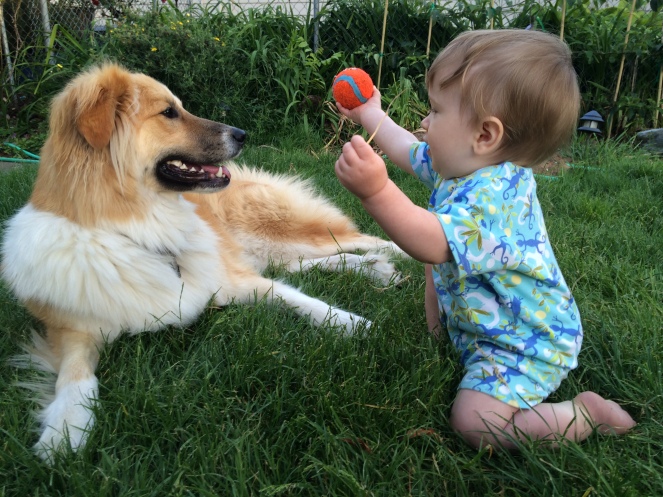 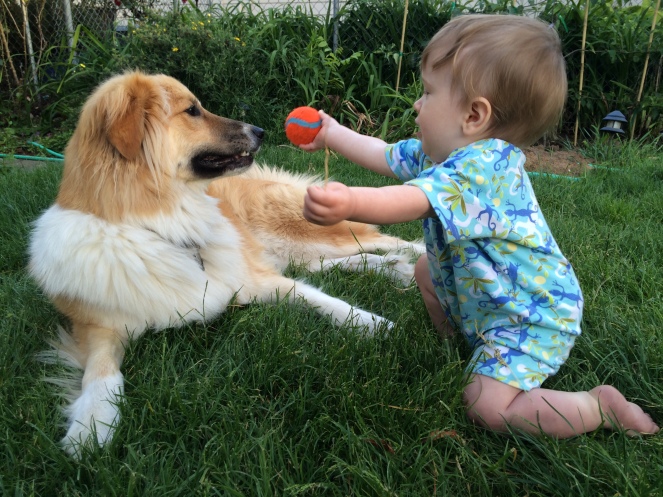 On Sunday we got together at Hopworks with a group of parents and babies from our prenatal group. All the babies are very close in age and it was fun to get them together! 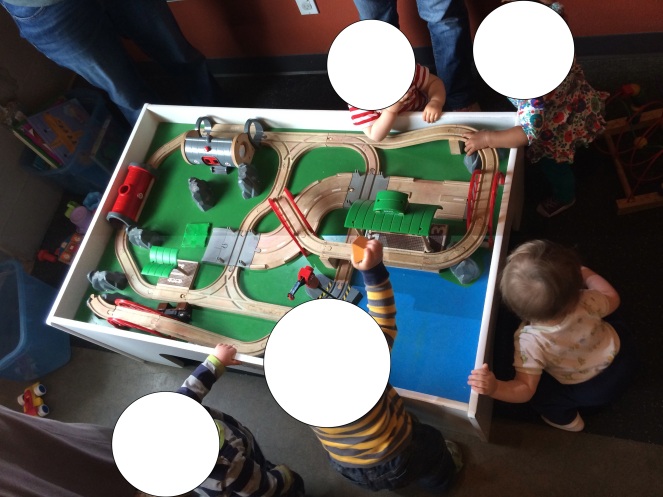 On Monday we biked 5 miles to Northeast Portland to check out Back to Eden Bakery – we might order Ari’s birthday cake from them! I really shouldn’t have done that because I was feeling like I was getting sick and should have stayed home to rest, but doing a long ride like that sounded like so much fun. Well, it wasn’t! Ari decided he’d had it with the bicycle seat and SCREAMED about half of the way there. If a kid’s in their car seat screaming, it’s only a problem for the people in the car, but when you’re out biking and they’re screaming in their bike seat (or trailer, which happens sometimes for us), you really feel like a spectacle! At one point I got off and took him out of the seat and held him, which instantly rewarded me with silence and a teary-eyed, red-faced grin, but then I was stuck walking uphill with him in one arm and my bike in the other and a couple of miles still to go (or more miles if we had turned around and gone home). So we forged ahead and let him cry, stopping for a break at a playground. At that point, we discovered that it wasn’t just the bike seat triggering the crying, it was also being held by not-Mommy (too bad, kiddo!). I had to eat in the bakery by myself while A. walked him up and down the street outside and I could still hear him wailing!

Then we were still hungry so we braved the young hip scene at a nearby bar with a happy hour we remembered enjoying a couple of years ago. We sat outside and let Ari sit on the ground when he got squirmy – he sat there spinning himself in circles grinning at people and probably wondering why nobody was paying any attention to him! Ah, twenty-somethings…

I decided to try a diaper change before we headed home and A. said he’d bet me 100:1 odds there wouldn’t be a changing table. This was a joke because I certainly wasn’t expecting a changing table – now that Ari can stand up I’ve managed to change him by having him stand in a bathroom with no changing table!

On the way home, we got smart and attached a head lamp to the front of the seat to entertain Ari. And pretty soon, the poor little tike was OUT: