We celebrated Ari’s birthday with a backyard get-together the weekend after the big day. It was fun to have a summer party on a warm, sunny day! As usual, I way overdid the planning and Google image searching for weeks beforehand, so I was all stressed out and still cleaning the house and setting up decorations when family members started arriving in the early part of the day. It’s also overwhelming for me to host family and friends at the same time and I never feel like I’ve spent enough time with everyone. I always end up wishing I had been less ambitious and more relaxed with things like this. But Ari had a blast!

I especially agonized over the cake. I wanted everything to be as ethical, cruelty-free, and low-waste as possible, and to me that means a vegan cake. We also had a guest who I knew would appreciate a gluten-free, vegan cake. I sampled some from different places and went back and forth over prices and options and whether I would feel comfortable not serving a “regular” cake to people who would want that. In the end, we did get a regular sheet cake from a place called His Bakery that did a really nice job. Here are pictures from a taste test with Ari sound asleep:

We also got a dozen gluten free, vegan cupcakes from Back to Eden Bakery in Northeast Portland. We went with the popular and delicious lemon poppyseed with lavender buttercream flavor. They make all kinds of yummy things there, the people working there have always been so nice to me, and I like that they emphasize the ethical benefits of vegan baking.

The banana cake from His Bakery was also delicious – and affordable – and the people there were also very nice! I chose the colorful swirls on the cake based on a picture they had in a little album. 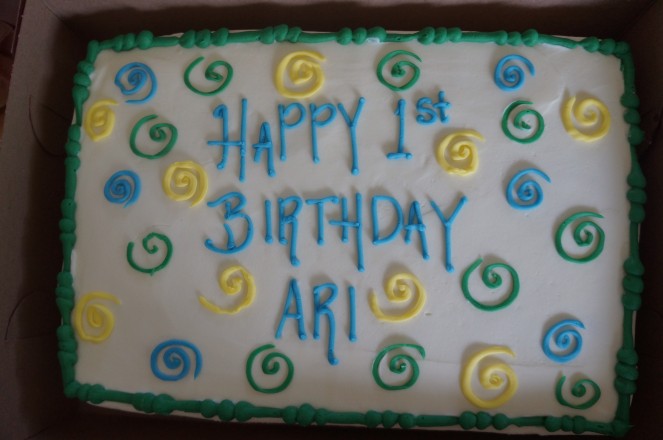 They made a miniature cake (just a white cake, not a banana one) for Ari for another $5! 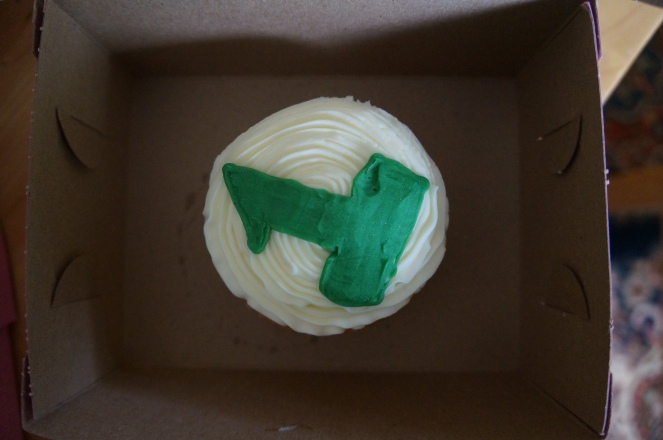 All year I’d been planning some kind of display with the weekly/monthly pictures I’ve been taking with the bear and elephant. I started this project and then ran out of time and A. finished it for me – so nice!

I had a photo canvas and a collage poster printed at Costco and put them on our table inside:

My wonderful family members helped hang banners in the backyard. We used the fabric ones that A.’s brother’s wife made for their wedding and then gave to us for Ari’s room, and a paper one from the grocery store that spelled out “HAPPH BIRTHDAY” – that was good for a laugh!

We also bought a grill on Craigslist and A.’s dad made it clean and shiny!

I wanted a picnic theme so I bought some picnic-style baskets at a thrift store and we put our kitchen towels in one of them to help reduce paper towel waste. We used jars for glassware. 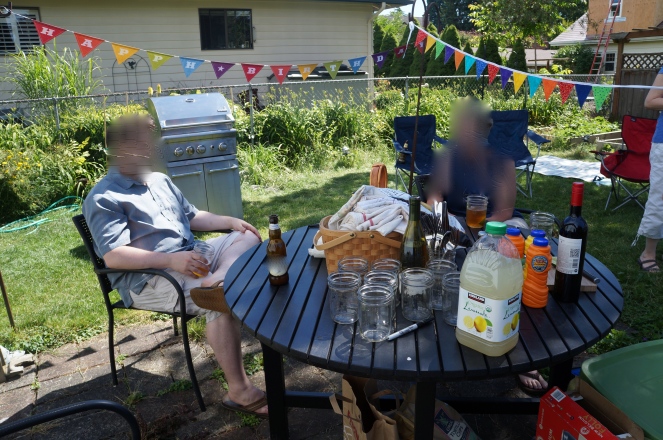 At the last minute I cut this gold ribbon off an Amazon.com gift wrap bag and taped pieces of it to Ari’s high chair for decoration. I found the blue ribbon around the house; I think it came from a baby shower gift! 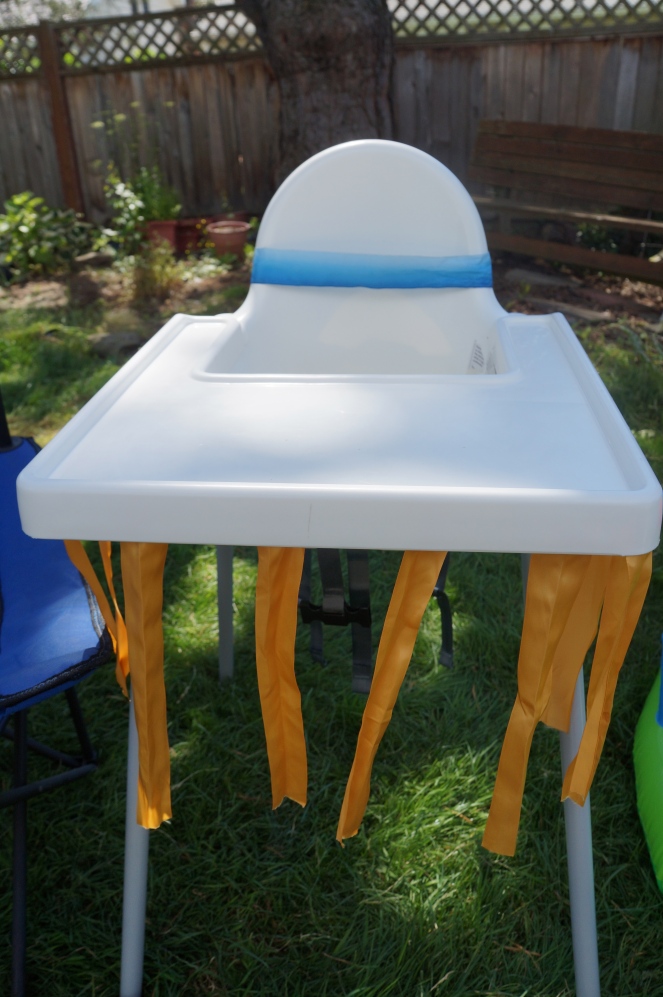 A. and his dad made some amazing pico de gallo and guacamole. They also did a potato salad and I don’t even remember what else, but there was a LOT of food. Both of our dads did the grilling of the meat and vegan sausages. In the background of this picture you can see Ari being photographed by his paparazzi entourage:

These are a couple of the pictures the paparazzi were taking in the photo above – he now LOVES playing with glasses:

There were four other little ones there – another boy Ari’s age, a toddler boy and a toddler girl, and an older little girl. They were SO CUTE together! We had bubbles and toys out and a little splashing pool (one of Ari’s birthday presents from our friends!) that they were ALL crowded in and around at one point. Ari stayed in the pool the longest, just happily splashing and lifting the toys in the air to watch the water pour off them. I finally had to just take him out! 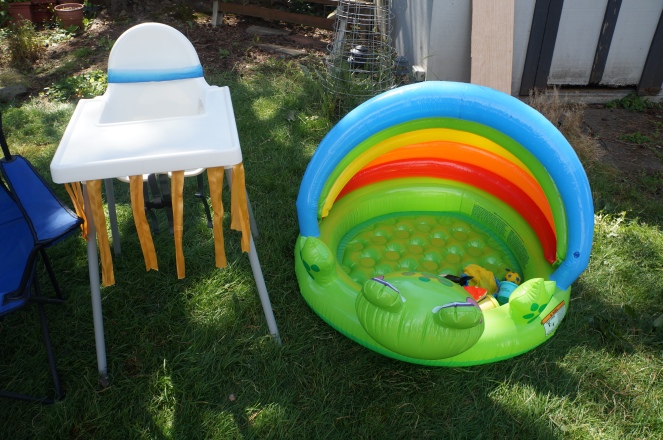 With one-year-olds you have to really move things along to fit all the traditional birthday party activities into their short span of awake and happy time. The recommended length for a one-year-old’s birthday party, according to what I read online, is about an hour and a half. I planned to fit everything into a two-hour affair from four to six pm. But I didn’t organize things well enough and people with little ones had to leave before all the food was ready and before we got to cake and presents, and I felt bad about that. We tried to open people’s presents before they left – here the little girls watch Ari opening some books: 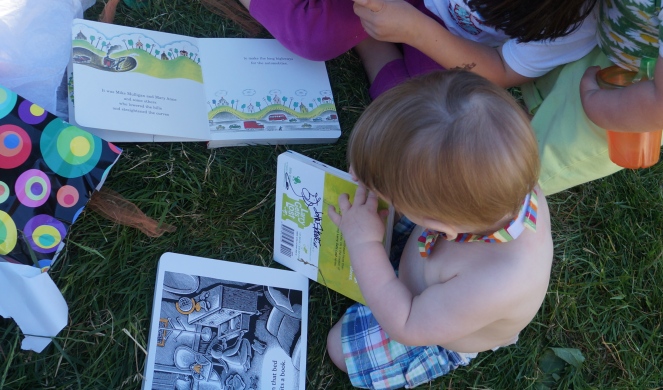 Then it was on to the cake. I had read about babies burning themselves on candles and had made a mental note to avoid that, but in the excitement I forgot to keep him away from the hot wick after I blew out the candle! Of course he reached right out and touched it. These were his only tears during the party! (I wasn’t taking the pictures; I was trying to comfort him.) 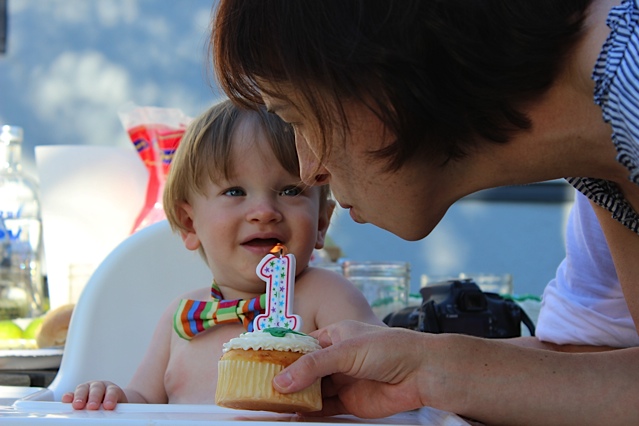 Then A. stepped in and stuck some frosting in his mouth and that calmed him right down! 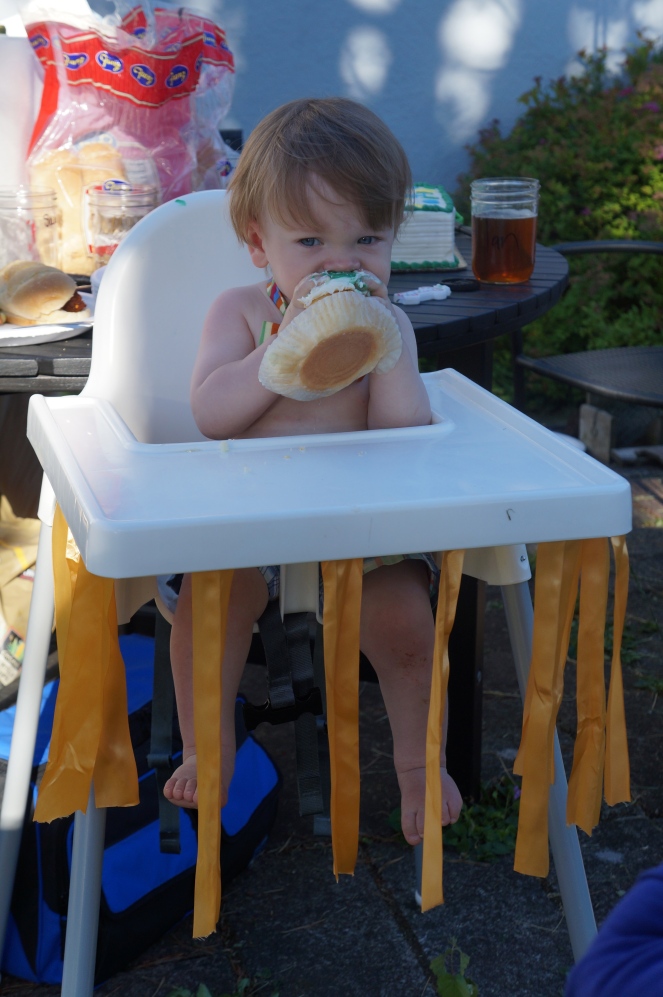 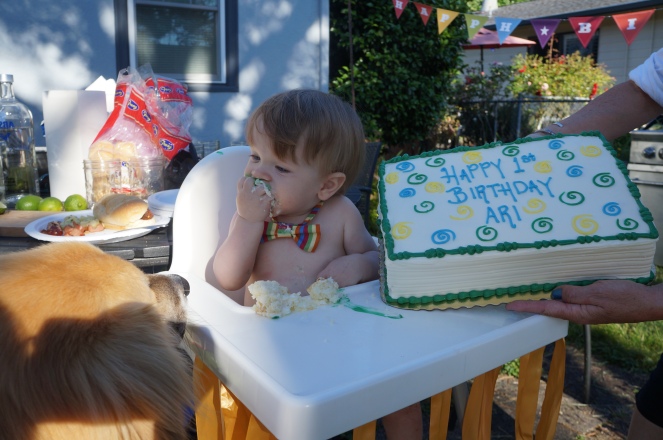 He graciously shared with Andrew (who was a VERY good dog for the party!): 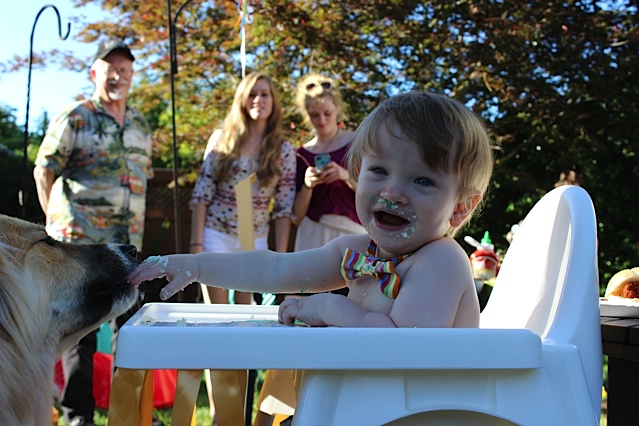 Then I got him all cleaned up and we were unintentionally matching: 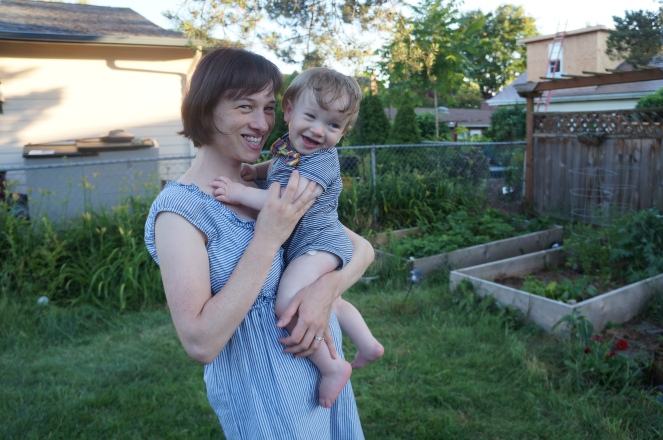 One really cool gift was this set of dishes made by an artist in the town where my parents live – he used a picture of Andrew:

The morning after the party, Ari opened another gift from a family that had to leave early:

This is a ball we gave him – he an Andrew both enjoy it: 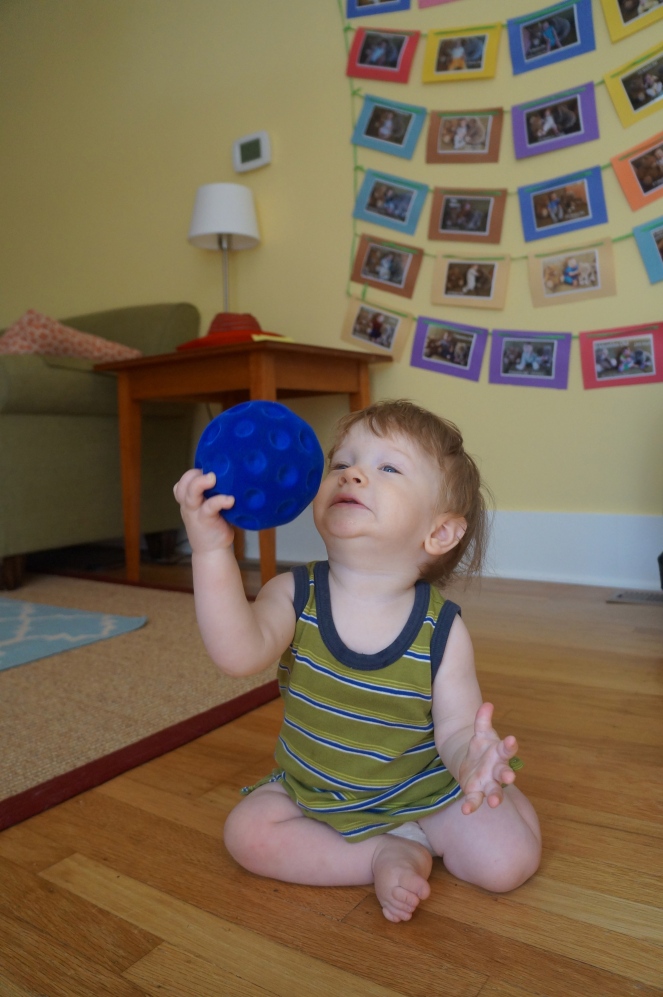 Also the day after the party, we went with A.’s parents to a fountain downtown to continue the water play:

We love our happy, one-year-old boy! He’s having so much this summer!