Okay, this is still a catch-up post. This summer is so busy!

Ari is such a big boy now I just can’t believe it.

Ever since our mid-July trip – so just before he turned 13 months old – he’s been feeding himself pretty well with silverware. I now let him feed himself his multigrain cereal in the morning because it keeps him busy while I fix my own breakfast and unload the dishwasher or whatever. It does get pretty messy so I leave him in whatever he slept in so I can just change his clothes or wipe him off afterwards: 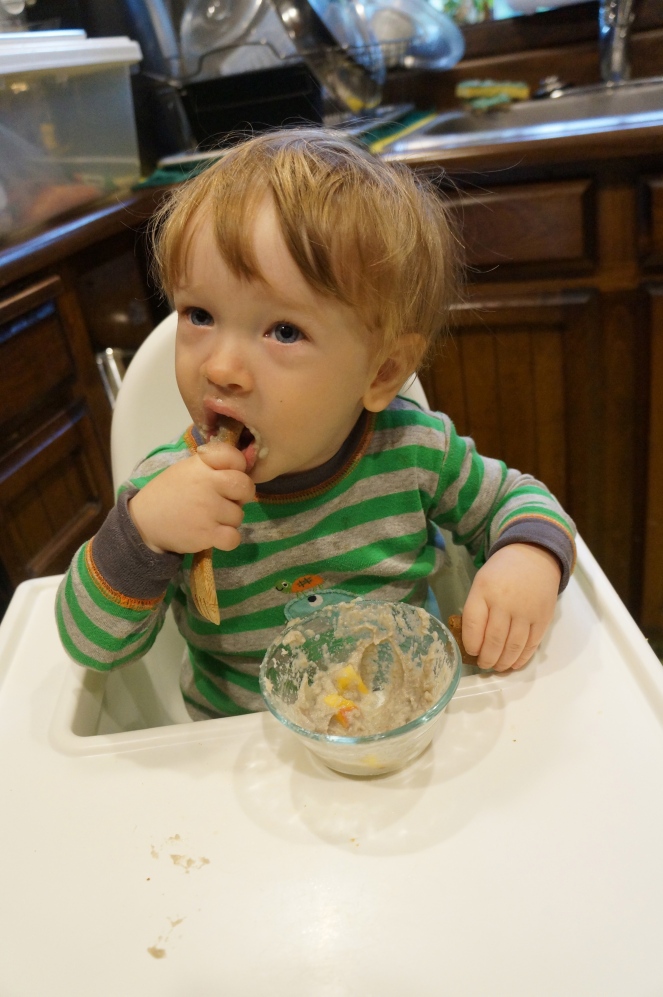 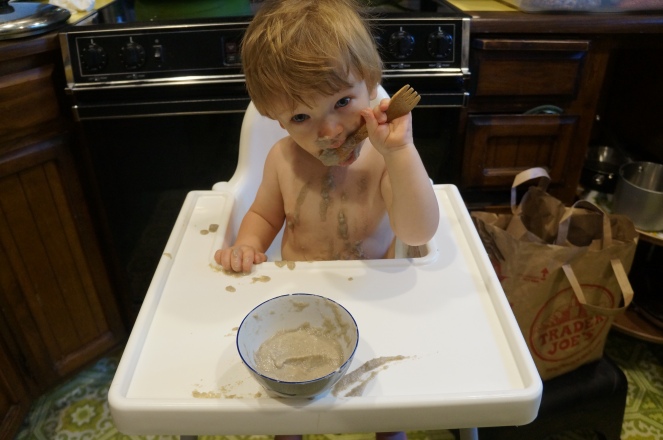 He loves climbing, and one day I came out of the kitchen and found him doing this:

So we got him this miniature slide and have been letting him climb more at playgrounds: 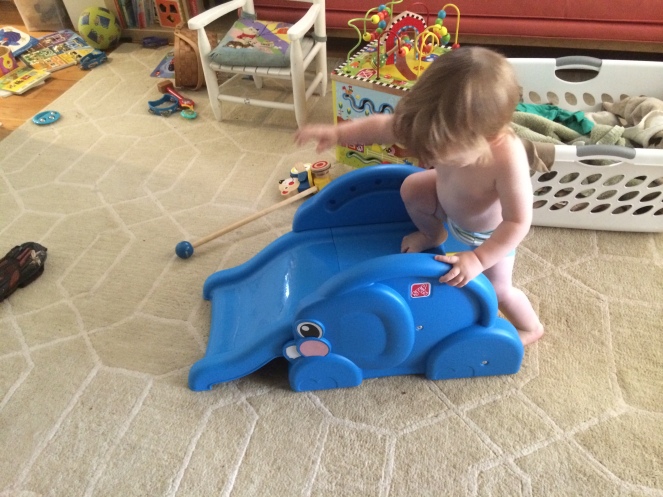 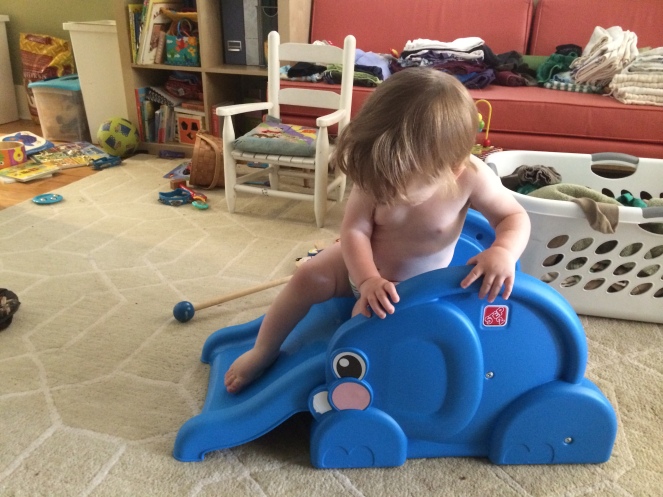 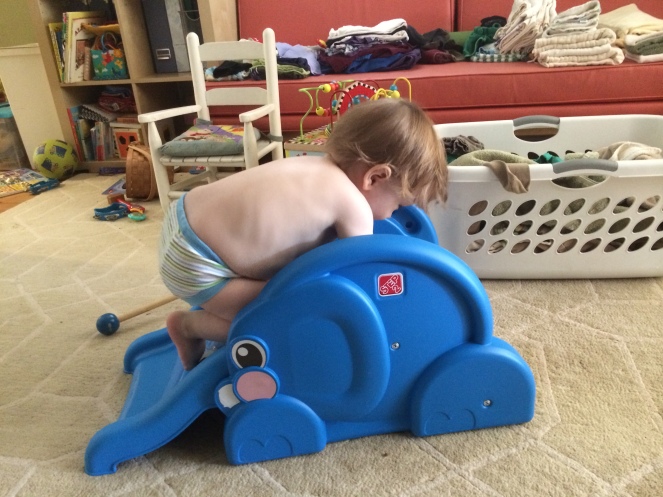 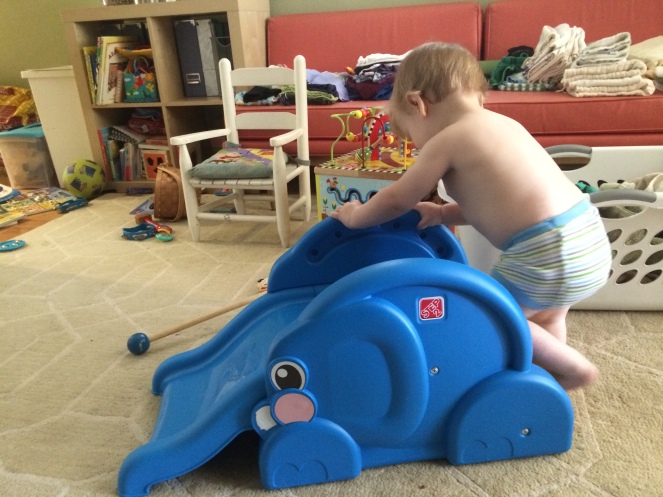 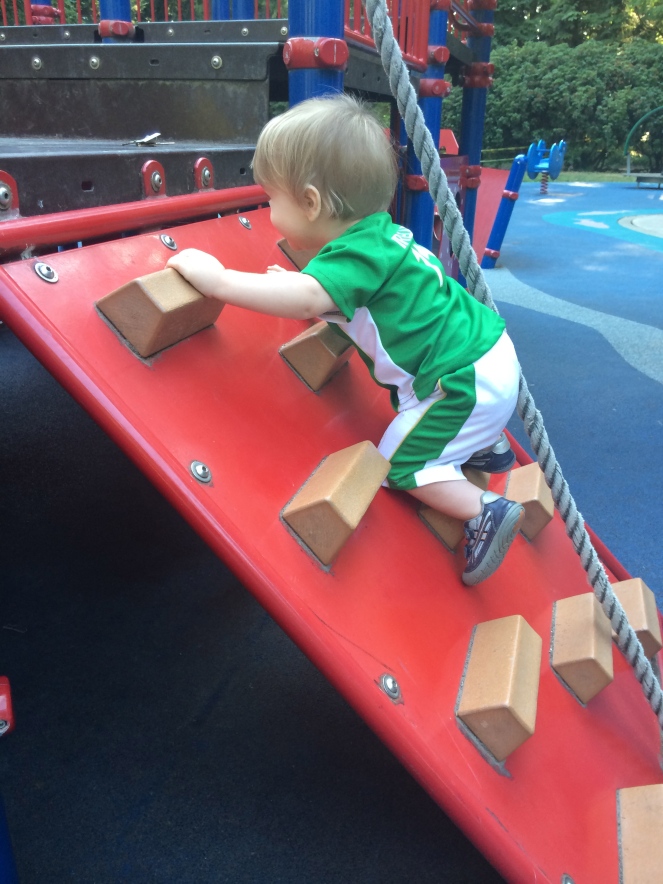 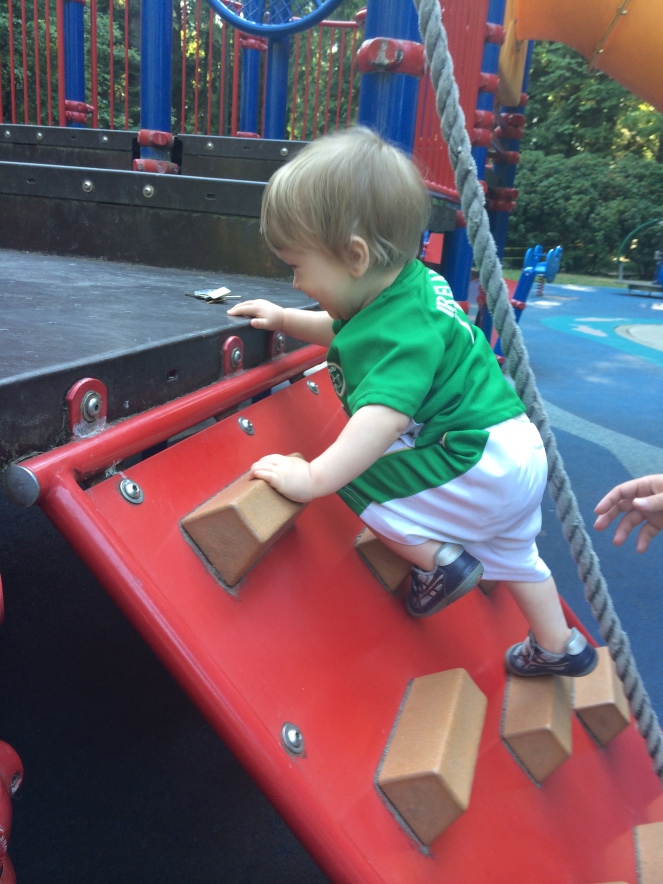 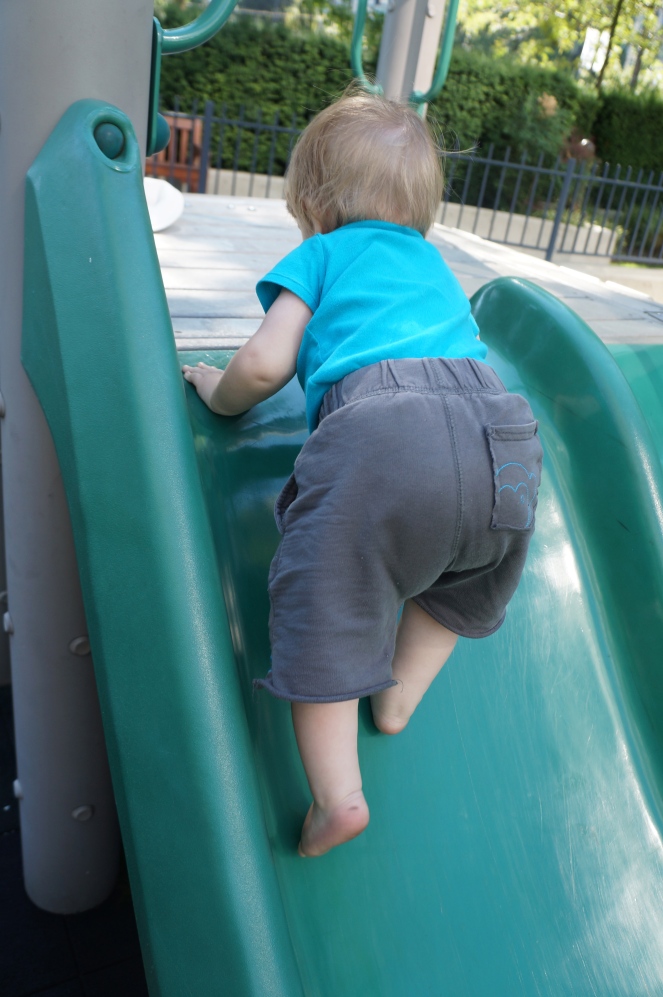 And he’s not just climbing…

He started really walking July 26th, at 13 months and 9 days old! He’d taken up to about four steps on his own before that, but it seemed like that mostly happened by accident when he was trying to get something. The night he really started walking, our friends were over and it was really late but none of us could get Ari to sleep, so we were trying to get him to walk and he wouldn’t do it. Finally they decided to go home and I went out with them to say goodbye. When I opened the front door to go back in the house, Ari stood up on the other side of the living room – holding his push toy (this one) up in the air with one hand – and walked across the room to me! Then he walked between A. and me several times, and some more times around the room. We were all SO excited! We eventually took some videos but they didn’t show as much walking as he was doing before we got the camera out.

After that, he still didn’t walk all the time, but sometimes I would see him just walk by and it was so weird! For the past few days, he’s been mostly walking. When he falls down, he stands up and starts walking again instead of going back to crawling like he used to do. And when he wants to get somewhere, he stands up and walks there! Or staggers, rather. He kind of looks drunk!

Okay, some other things. Right after he started walking, we went to a park on the river in Southwest Portland for a barbecue for my work. We decided to make an adventure out of it by biking there, and we had an absolutely beautiful ride! We took the esplanade to the Hawthorne Bridge (the entrance to the bridge from the esplanade allows you to skip the uphill part of getting on the bridge from the road – yes!!), then biked mostly on a paved waterfront path to Willamette Park, where we joined the barbecue. On the way back, we continued south to the Sellwood Bridge (we kind of ended up on the highway on our way there, which was terrifying and I don’t think we’ll ever do that again!). The Sellwood Bridge just has a narrow sidewalk on one side and was pretty scary on bikes, but they’re building a new, wider one next to it. On the other side of the bridge we biked past the Sellwood Riverfront Park and got on the beautiful paved bike path along the river from there back to Division St., basically. That was a fun day! Here is a map of the ride – I recommend it!

The following weekend, we went up to Vancouver, B.C. to visit A.’s brother and his wife. I think that’s the longest drive we’ve done with Ari since we went up there for their wedding when he was nine days old (and we stayed overnight halfway there for that trip). It was probably six or seven hours of driving. I tried to time things so we would drive while he napped and stop for breaks between the naps, but we got a late start and did most of the driving in the evening. He did pretty well, though, with A. or I in the backseat playing with him. We had installed his new, bigger, convertible car seat and it worked out pretty well.

Here are some pictures from the drive: 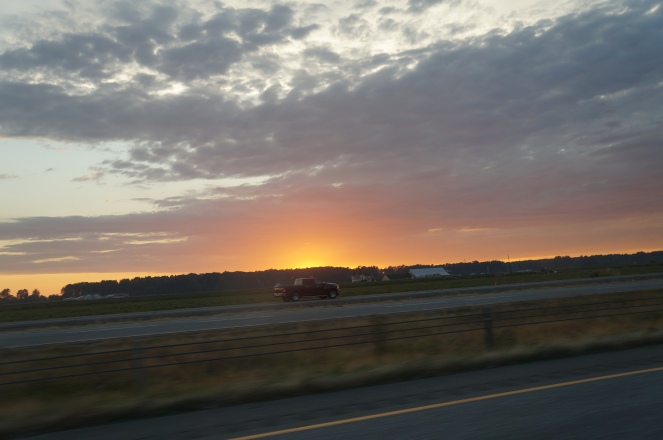 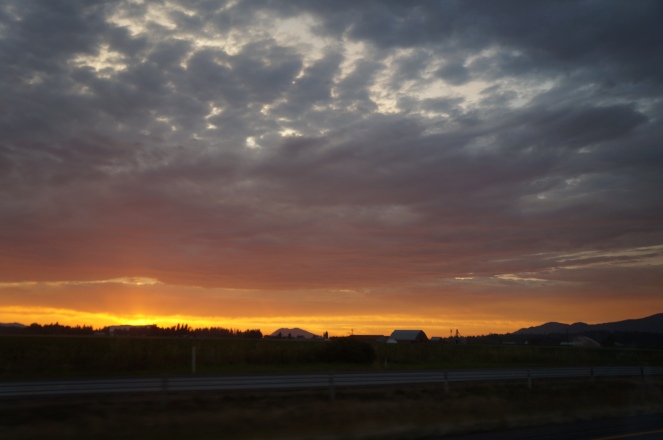 In Canada, Ari played a lot with his little doggie “cousin” Ginger, who was very good with him:

One day while we were there we went to Maplewood Farm to visit with farm animals, something I’ve really been wanting to do with Ari. My favorite of the houses I lived in as a child was the one we rented on a farm for three years, when I was ages four to seven. I remember visiting with the calves in the barn (who had been taken from their moms and were in little stalls) and they would lick my hands with their rough tongues (I also remember their moms lined up, attached to machines, being milked). Once I got to stay home from school to watch a cow give birth. Anyway, I want Ari to love and be familiar with animals!

He’s a little young still, but he did pet a pony, feed ducks, chase geese and chickens around, play with goats (even getting knocked over by one without getting upset!), and pet a cow. Here are some pictures: 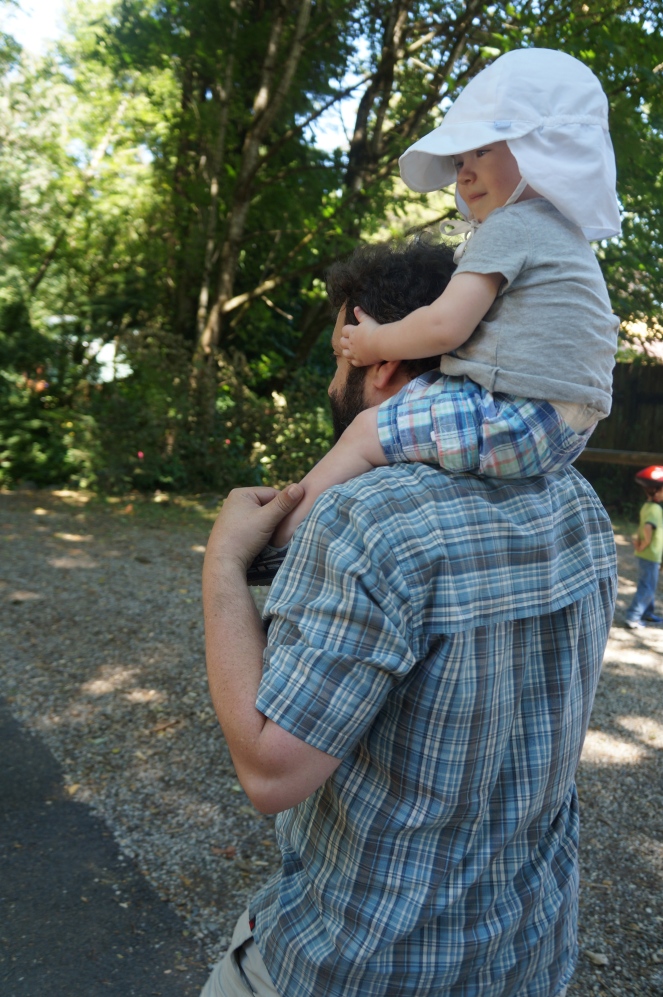 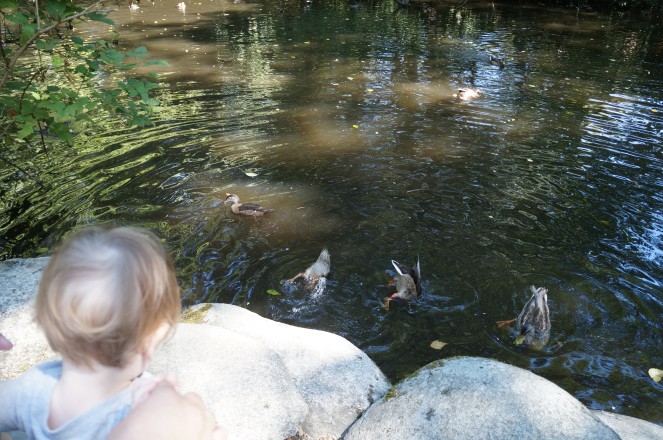 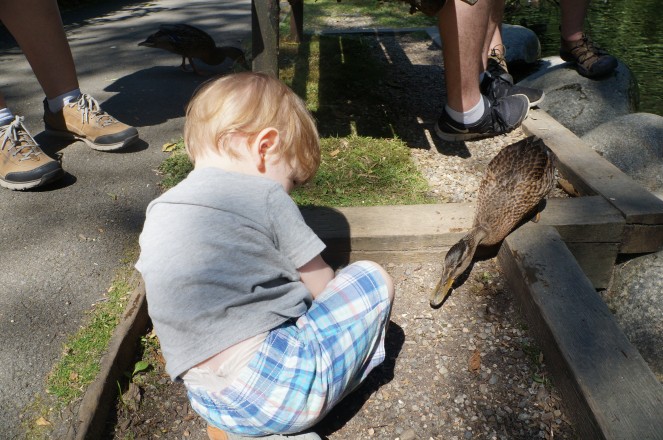 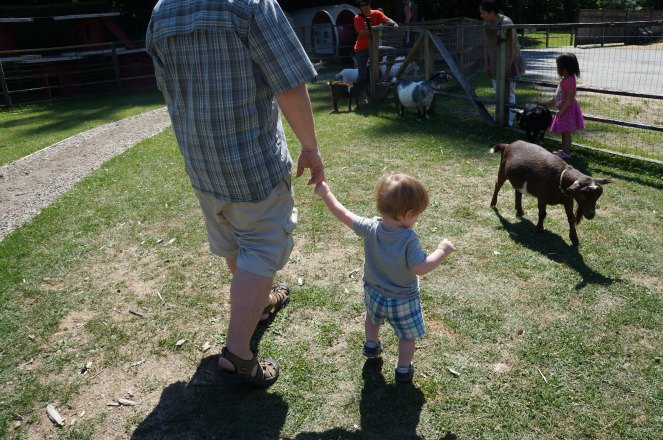 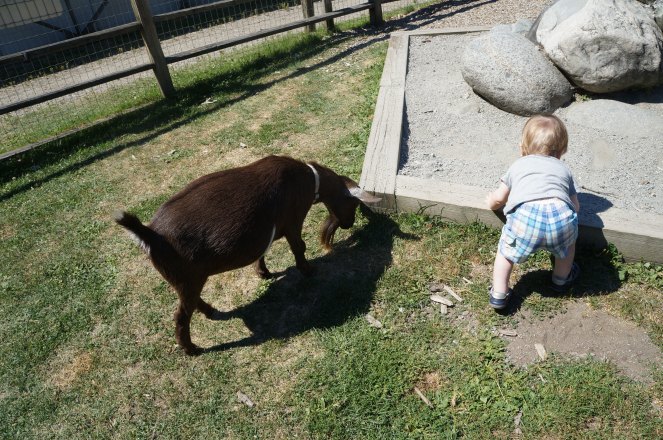 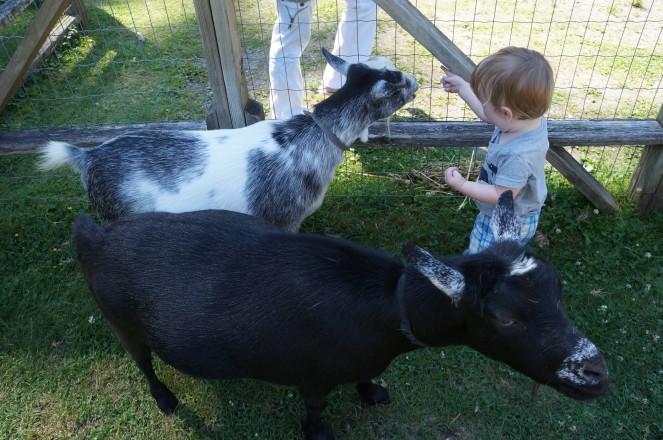 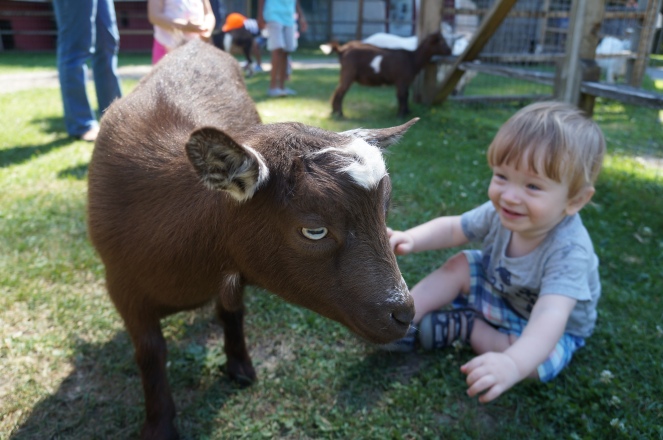 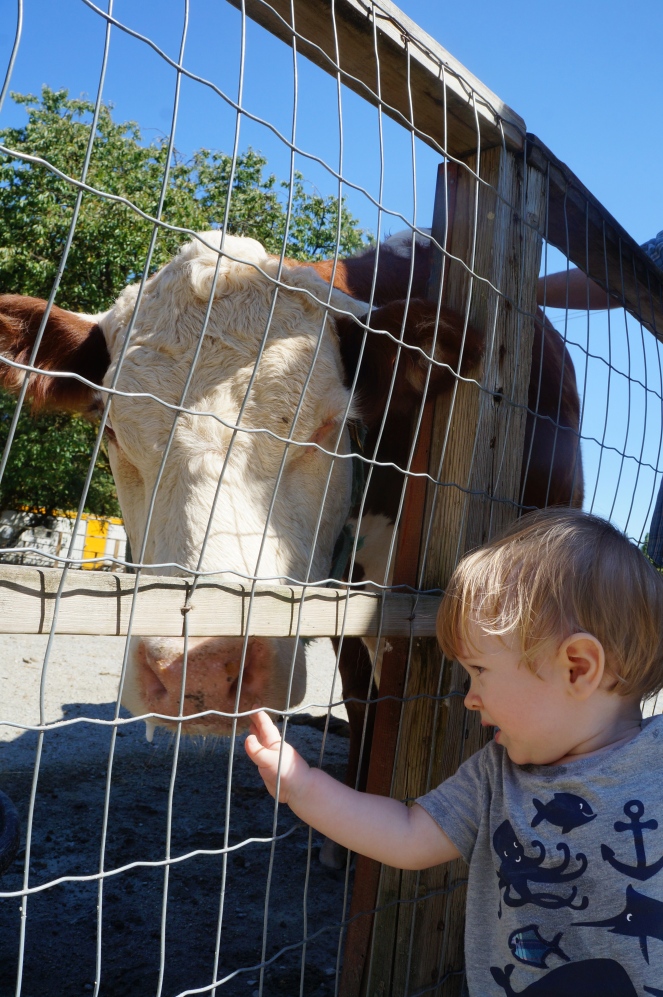 After the farm we did a bike ride along the sea wall to Granville Island. It was so beautiful! We made a pretty cute sight with Ari in his little bike seat and Ginger the dog poking her head and front legs out of a pack on A.’s brother’s back.

After the bike ride we had an amazing sushi dinner (involving a lot of effort to keep Ari entertained – but he likes sushi!), then we rode the sky train to the Richmond Night Market, where Ari met a giant duck:

The next morning, Ari and I left early to drive to Port Townsend to visit my parents and grandma. (A. stayed another day and then flew back to Portland and went straight to work.) Here we are waiting for the ferry:

I think it was Ari’s first ferry ride! When I took him outside he went straight for the stairs, of course. We went to the top deck and he raced around: 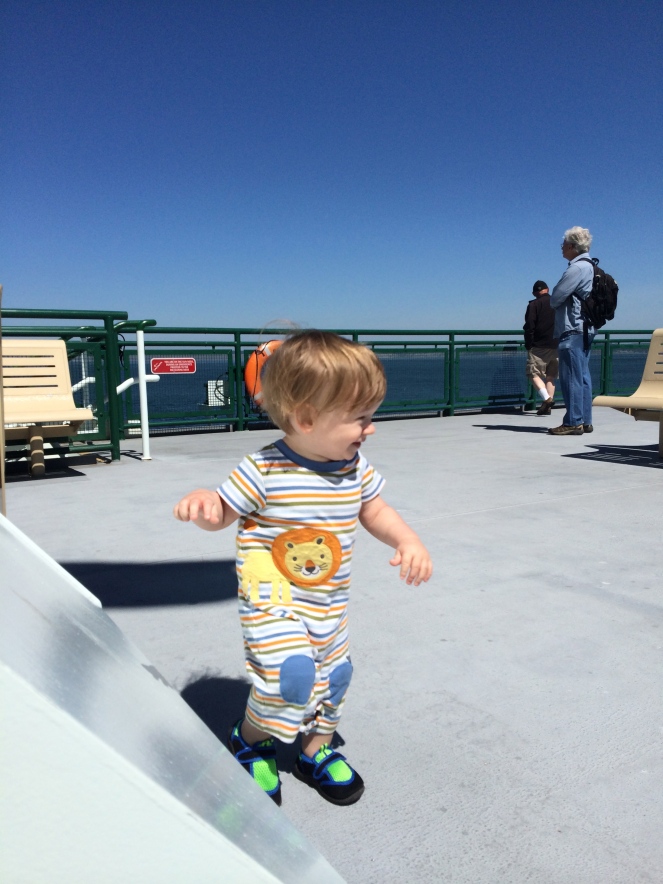 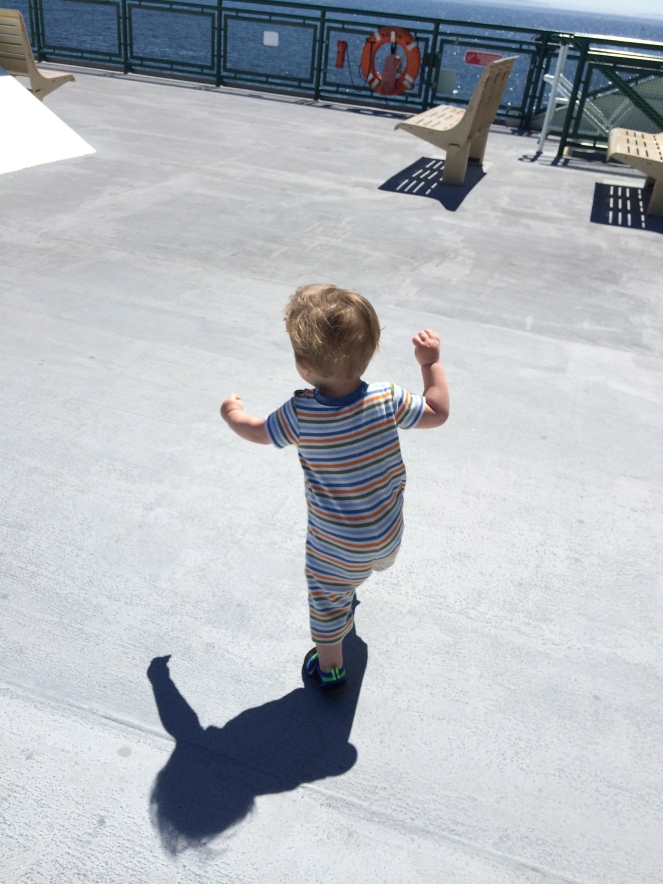 We spent one night in Port Townsend then had another ferry ride to visit a good friend on the east side and her 8-month-old baby, who I hadn’t met yet! It was so much fun to meet her and talk about mom stuff – both of our lives have changed so much since the last time we got to sit down and have a good talk! Of course, it used to be easier to talk without my baby throwing toys at her baby’s head…

From there we headed back to Portland. Ari was pretty good in the car. He looked at his books and when he got fussy I finally had the brilliant idea to set up his musical, light-up “laptop” on his lap, which worked for a while. We also made A LOT of stops.

Well, that all takes us up to a week ago. I have lots more to report but it’s time to go to bed so I can work the next two days!

5 thoughts on “We Have a Toddler! And We Took Him To Canada!”