Wow, I am beyond behind on this blog! Now it’s intimidating to try to catch up on everything from the past couple of months. And I still don’t really have time to write a post, so it’s going to have to be a quick one. I’ll just have to accept that lots of experiences will be forgotten or will just continue to live only in my memory…

But first: as you can tell from the title of this post, I’m pregnant! I’m now almost 14 weeks along. Ari will be a big brother somewhere around the first week of June! Hopefully not ON his third birthday. 🙂

That’s partly why I’ve been MIA from this blog. I’ve just been so tired and feeling crummy with nausea and heartburn! But now I’m entering the second trimester and I feel much better.

The main question I usually get is whether we know yet if we’re having a boy or girl, so I’ll just say that we should find out at our 18-20–week ultrasound, which means we should know by mid-January. Wow, that’s coming up! It’s all going much faster than when I was pregnant with Ari. I’m in maternity clothes already and look pregnant earlier than I did with Ari. The first trimester was easier to deal with because I knew it was temporary and I gave myself permission to rest as much as possible and eat poorly and eat take-out when opening the fridge made me feel sick. Appointments and ultrasounds have come and gone so fast I’ve barely been able to pay attention to them, and I can see that in no time we’ll be rearranging furniture in Ari’s room to accommodate the crib (yes, they’ll be sharing a room!).

We told Ari the news when we took him to the 13-week ultrasound, to explain what we were looking at. On the way there, we asked if he wants a brother or sister and he answered with a flat, “No.” I made a photo book of my pregnancy with him and he recognized the ultrasound photo as a picture of him “in Mommy’s tummy,” so we told him there is a new baby growing in my tummy. When we got there and were looking at the ultrasound, he just asked to watch Peppa Pig instead!

He acts out elaborate scenes with all his little animal dolls, where they all pile in a truck and drive to the zoo (to see other animals, I guess), and they might sing the song, “I’m going to the zoo, zoo, zoo…”, or they get in a car and drive to visit one of our family members, or they go to school, or to bed. Sometimes one animal pretends to be another animal. He also likes to have two sizes of each kind of animal so that there are mommies and babies. One time, he was moving his little animals along in the space behind the freezer door handle (a horizontal bar) and announced that they were swimming, and it did look like they were in the water with their heads poking out!

Often one of the animals is scared or scares someone else. He also wakes up screaming sometimes at night and crying something like, “Hippo, don’t scare me!” or some other animal-related scary thing, and it’s hard to get him to fully wake up.

For a while, we were having a really hard time with daycare drop-offs. He would sob and beg us to stay and it would take us forever to leave. We thought it might have been because he was in a new classroom with some new kids and teachers, even though the two main teachers and most of the same kids are still there. We got some books about goodbyes and going to school, and acted out scenes with his animals. The other kids in his class were usually so sweet, bringing him toys and encouraging him to play games with them when they saw him getting sad. (There’s just one boy who took his special toy from him and Ari complains that he pushes him down.) One day they asked me to pick him up early because he was sad all day. We wondered if we would have to get a nanny or try a different daycare program. But then, suddenly, he was back to normal, barely saying goodbye to us while he eats breakfast, settles in for a story, or giggles with his friends!

There is constant chatter and singing going on! The other day we walked to breakfast and for several blocks he was singing something he said one his teachers taught him, that was basically a list of different animals and descriptors (a silvery fish, a happy elephant…) with a tune and a rhythm. A. and I both remembered how our younger brothers sang nonstop and we would complain to our parents about it, tell them to shut up, punch them… Now we have to be supportive! 🙂 But of course now we also find it mostly adorable. And we think it’s fortunate that Ari was the first so no one is beating him up to make him stop singing!

Also in terms of verbal development, Ari is very careful with his pronunciation and enunciation and I’ve noticed that I can understand him much better than I understand other kids. That’s partly because I’m used to the way he talks, but other people have commented on it too. He can pronounce long, multi-syllabic dinosaur names, for example. He also uses pretty complicated and precise sentence structure, such as, “I want to smell those candles that are on the table.”

He’s been quite interested in letters and spelling recently. He points at each individual word on the pages of his books and asks, “What’s it say?” He asks how to spell different animal names or what letters they start with. The other day he put some blocks in order as though he was spelling something and then said, “Zebra!” and I looked closer and realized he’d spelled “zebras” backwards. I think that was a coincidence, but it was weird… He can spell and read his name spelled in capital letters and one day when we were bored in a waiting room I wrote “DOG” and asked him what it said, and he got it!

His counting skills have improved, and he’s been able to count pictures of up to about 8 of something. But then he gets confused and starts jabbing his finger and counting randomly.

His reasoning cracks me up sometimes. The other night he was saying, “I want Mommy’s milk” even though we stopped nursing in July. I told him that my body doesn’t make milk for him anymore. He said, “Well, then, I will be sure to spill…in your shirt.” (Pause) “Can I do that? Can I spill my glass…in your shirt?”

He has a good sense of humor, too. Sometimes he quotes lines from the TV shows he’s seen. One day he kept asking me, “Why?” about something, then he said, “Stop saying why all the time!” and gave me a sly grin, and I realized he was quoting a scene from Peppa Pig. He also thinks it’s funny to say, “Winnie the Poop” or “Winnie the PooPoo.”

Negotiating is another skill he’s been working on. If I offer one book before bed, he says, “How about two books?” If we tell him he doesn’t need something he’s asked for because he already has something else, sometimes he’ll throw the thing he’s holding on the ground. The other day – I’ll admit it – I was bribing him with raisins to take bites of his dinner. He took a sip of his water and said, “One bite of water! Now two raisins, please!” When I insisted it had to be a bite of food, he said, “Bite of water and then a raisin.”

Eating is a big struggle. At home, he’ll pretty much only eat cereal and yogurt, milk, apples and peanut butter, salty baked “snapea crisps” from Costco, and peanut butter and jelly or grilled cheese sandwiches. Although the other night I made a delicious peanut-butter encrusted fried tofu with brown rice and collard greens and the only thing he would touch was the collard greens! He ate a huge mouthful. Fortunately he seems to eat well at school, where they serve all homemade, organic, vegetarian food with lots of whole grains and fruits and vegetables. It’s very comforting knowing they’re doing a better job with food there than I am at home!

Okay, picture time! At the beginning of October I found out I was pregnant and we flew to San Diego for me to attend a nursing conference and to visit some good friends there. Ari has his own seat for our flights now, and he did pretty well with lots of snacks and borrowing Daddy’s headphones to hear his favorite music.

While I was attending to conference A. and Ari went to the amazing zoo there. When I had time off, we walked around Balboa Park and rode a little train there, and went to Coronado Beach.

I gave Ari a piece of kelp and he decided it was a stethoscope: 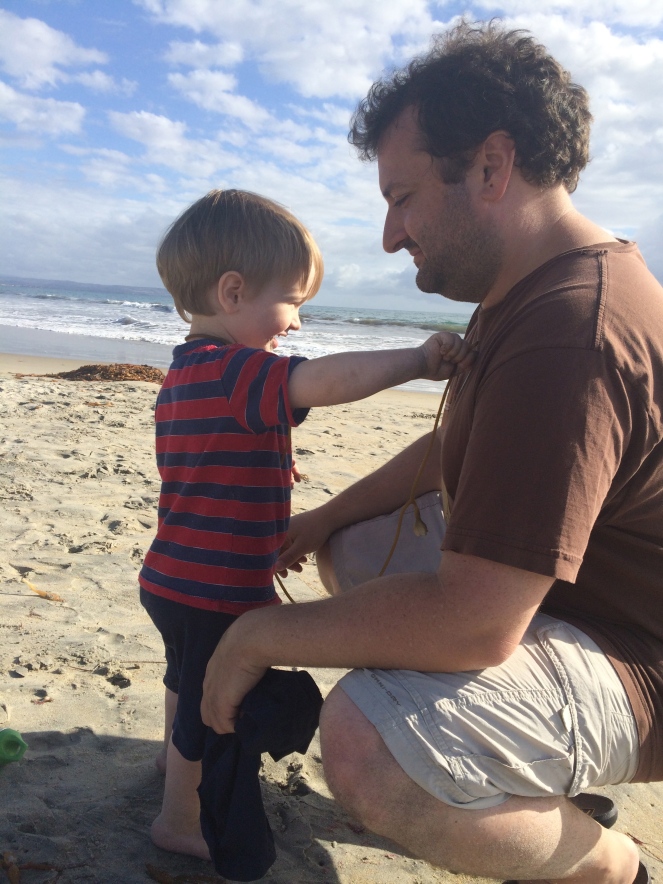 Shortly after we got back, Ari had his second dentist visit, and the first one where he was in a chair instead of in my lap in the baby room. He actually did great, opening his mouth when asked and letting them clean and examine his teeth.

We finished our circus classes. Who’s in there? 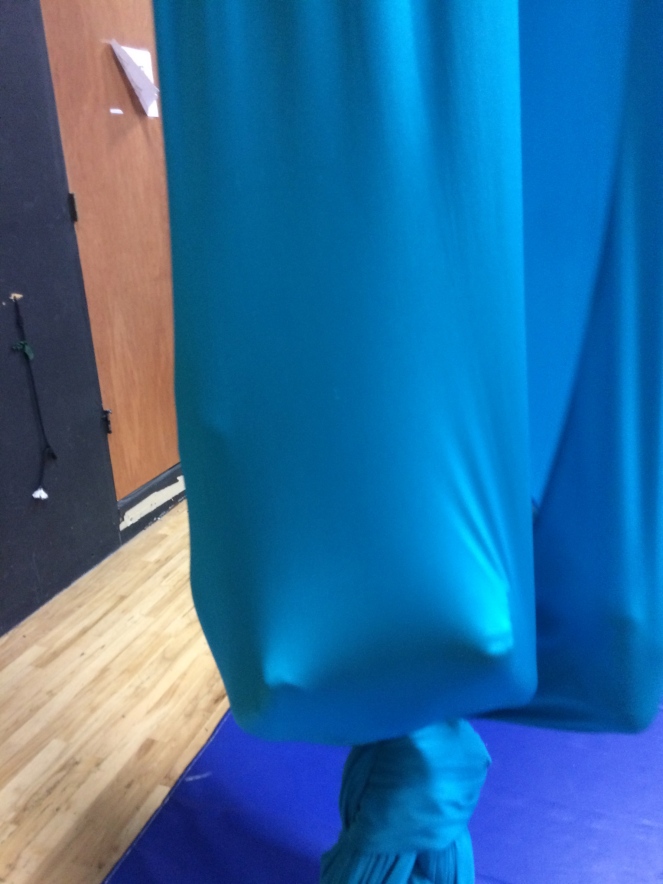 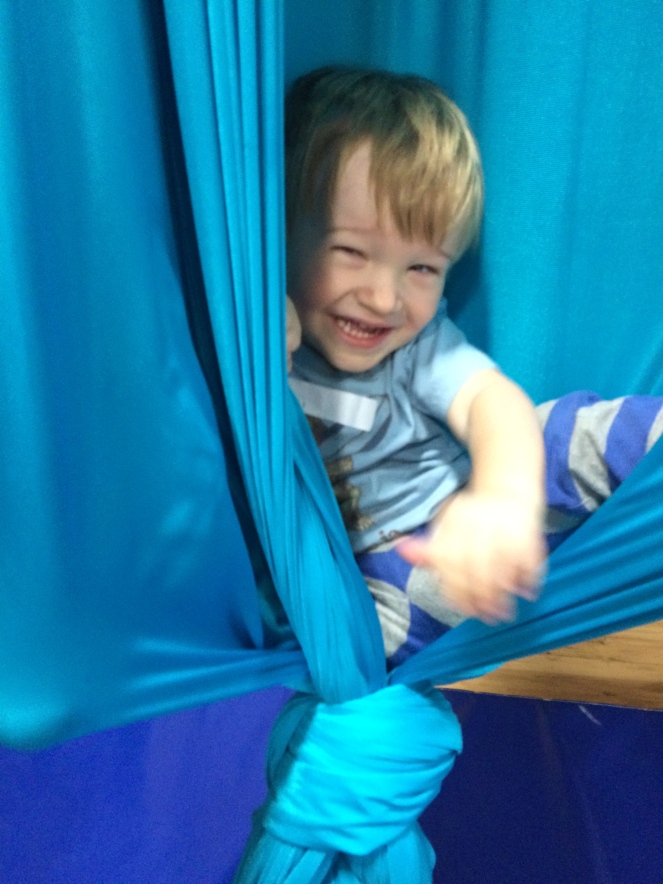 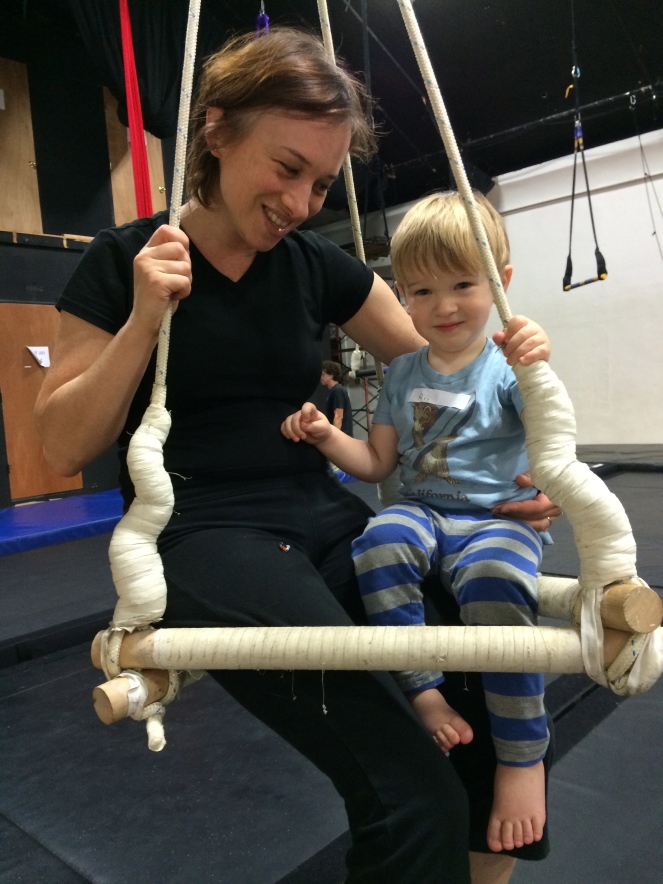 He went through a phase of wanting to build “a TALL tower!” all the time.

We had visits from both grandmas, and during my mom’s visit Ari had a bad fever the whole time. It ended up lasting a week and I thought I’d have to quit my job and stay home with him forever! But he got better on his own. The pediatrician said it was probably some kind of influenza. She prescribed antibiotics because his ears looked clogged and that night we were desperately calling her and the pharmacy and walking into the clinic where we used to take him, trying to get the script and get it filled because he was crying nonstop, but then all of a sudden he asked for banana bread so we drove through Starbucks and got him some and then he was fine! So by then we had the antibiotics but we never used them.

I was tired that week, too:

We did bundle him up and take him for a walk for some fresh air. 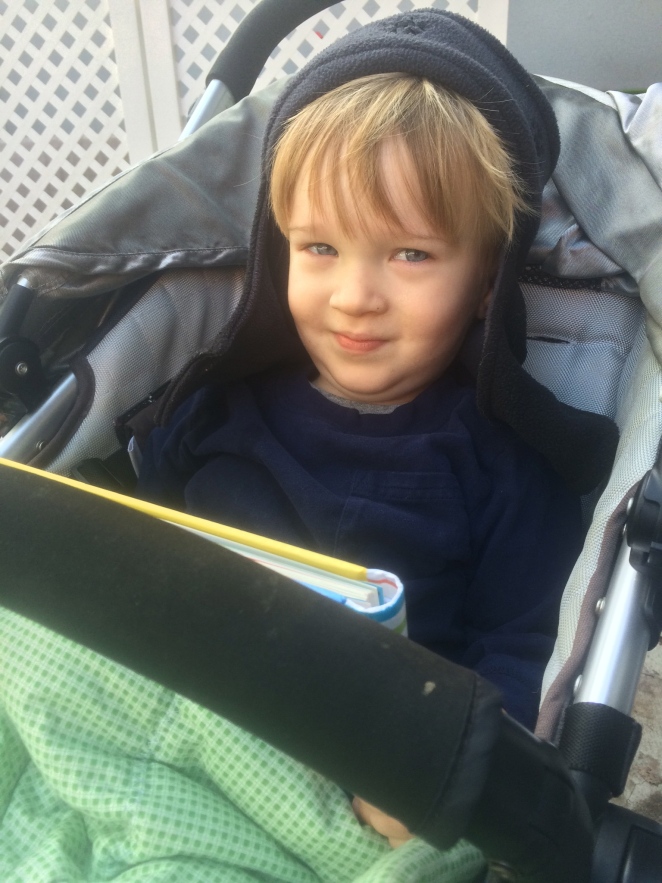 He fell asleep on his book: 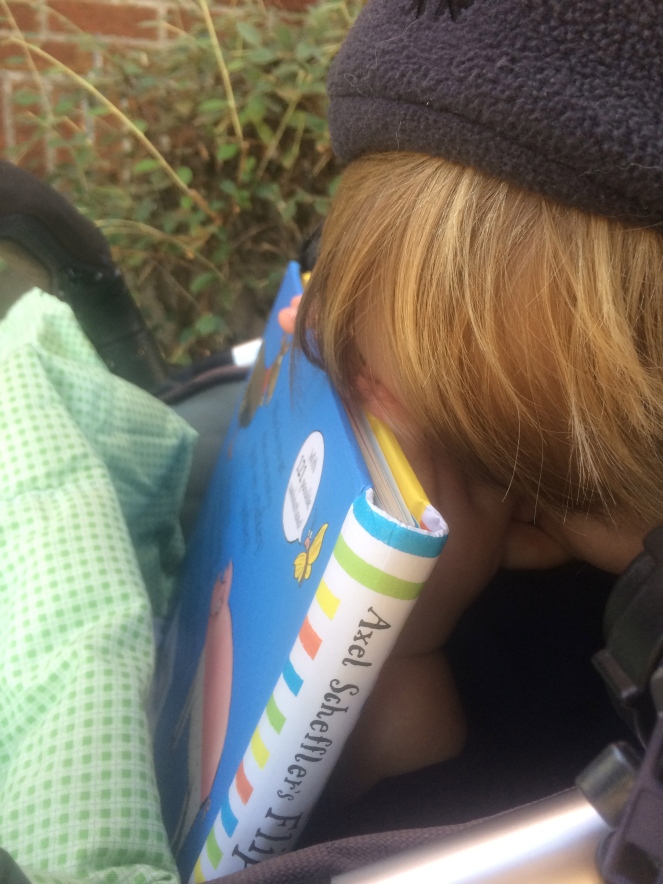 We had a good day at a pumpkin patch, one of my favorite fall things to do. 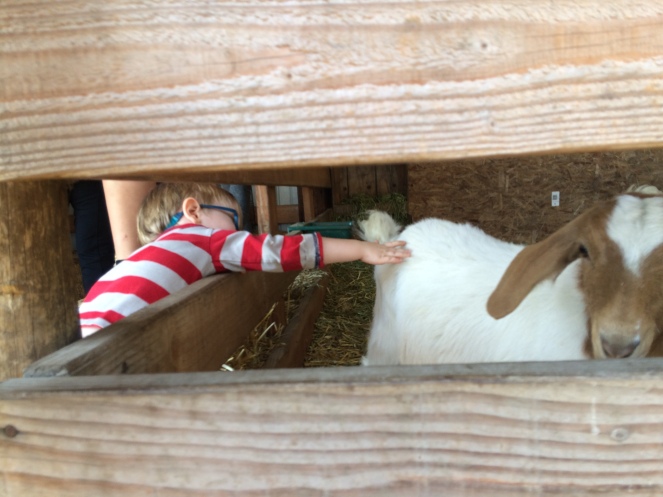 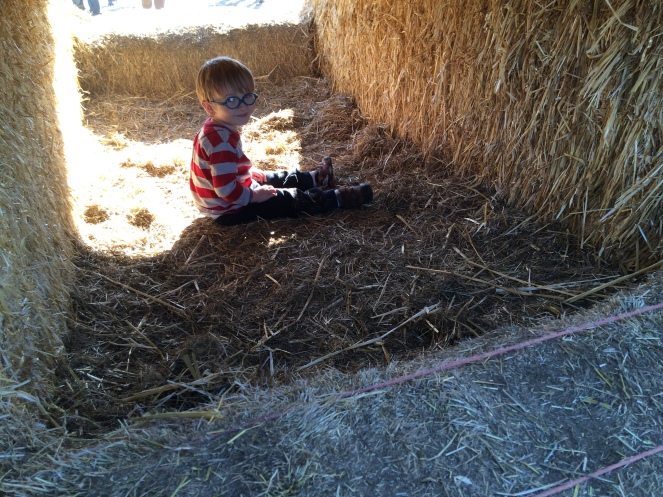 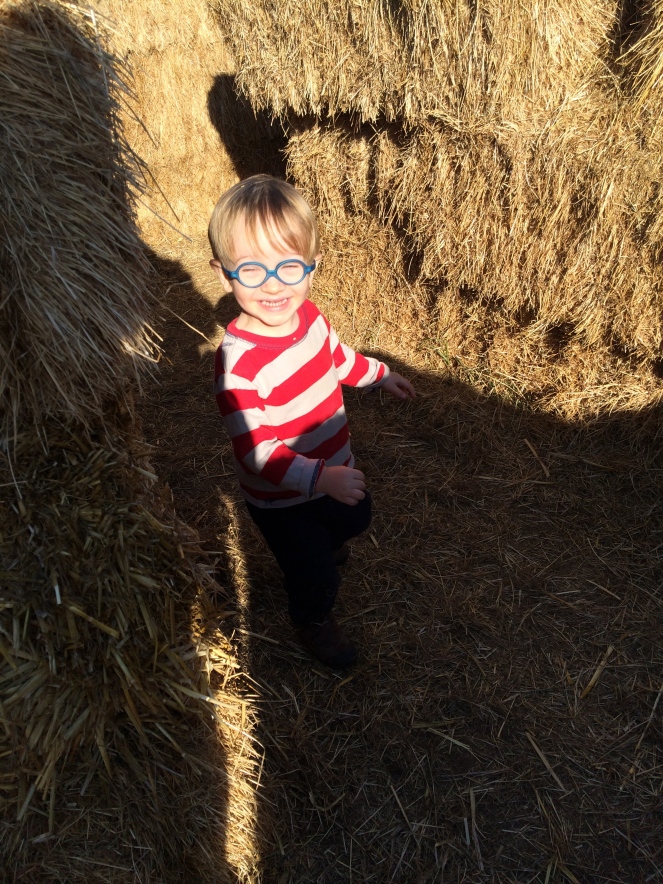 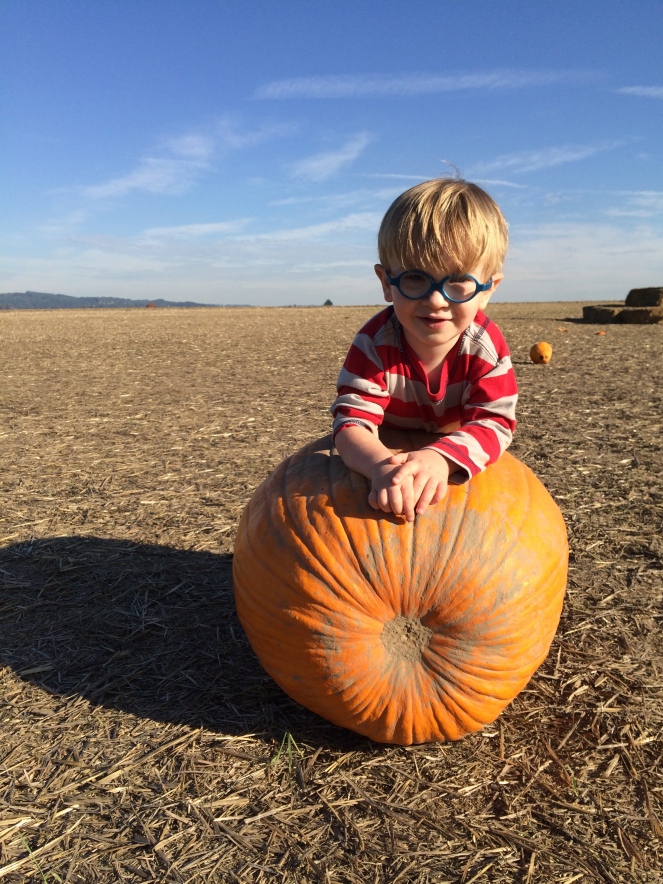 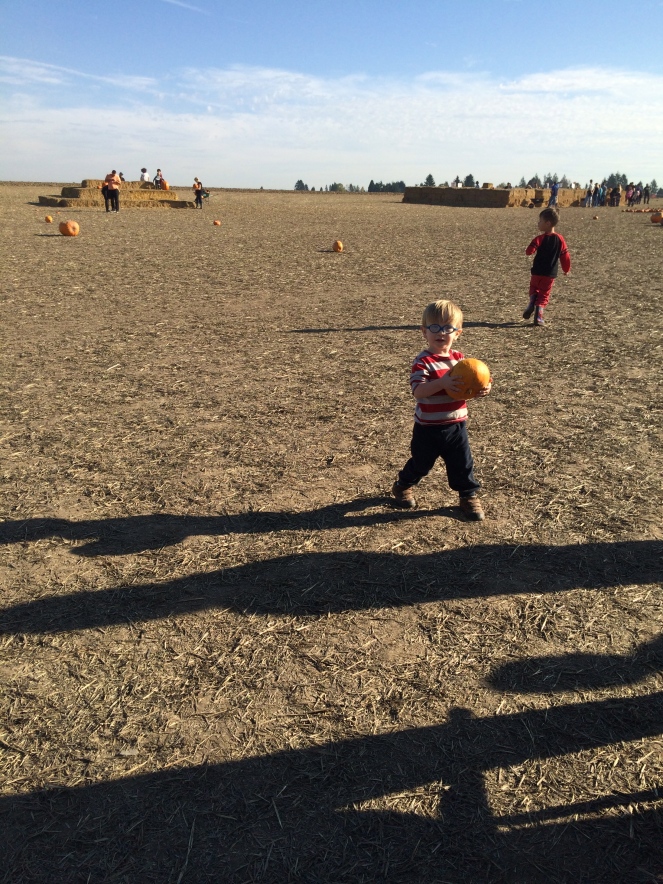 He still loves to vacuum with me: 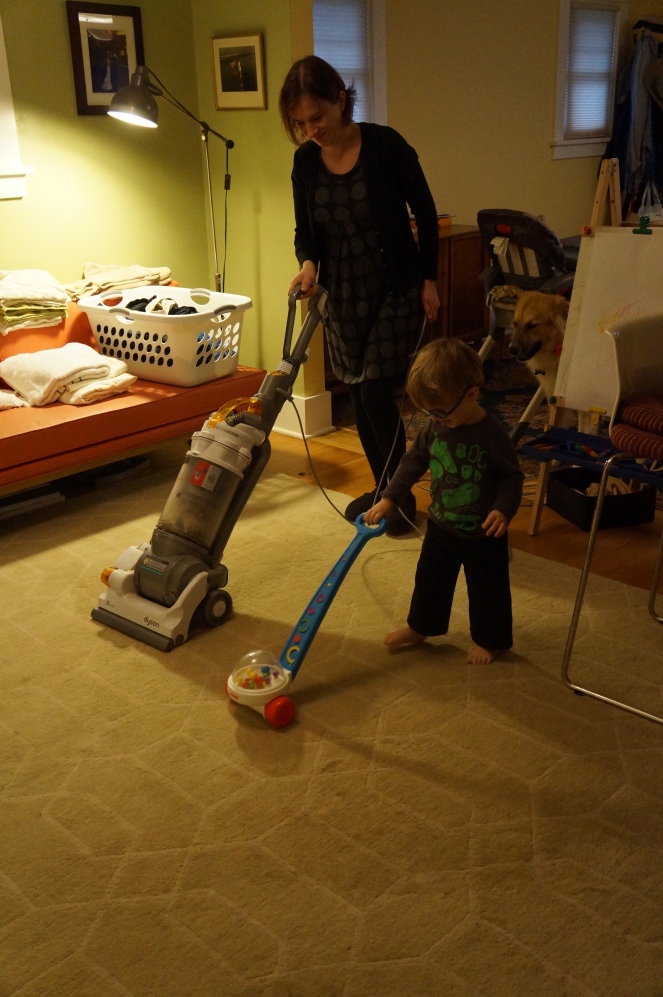 My aunt visited for Halloween and we took Ari to the Children’s Museum (craziness!) and ice skating! 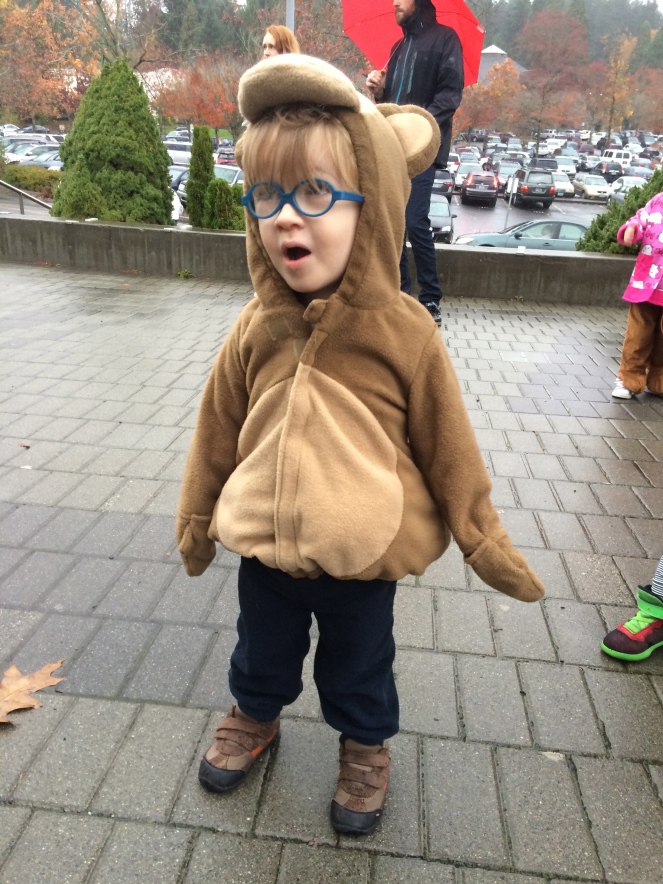 Then he got to try out some rides: 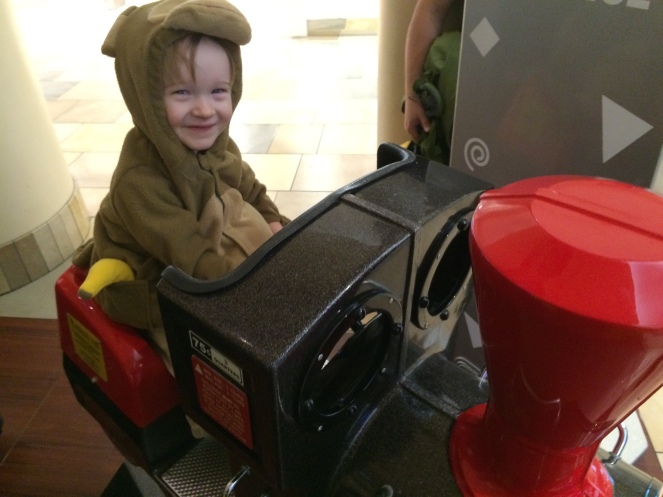 I got to see the baby on ultrasound in November, at 11 weeks: 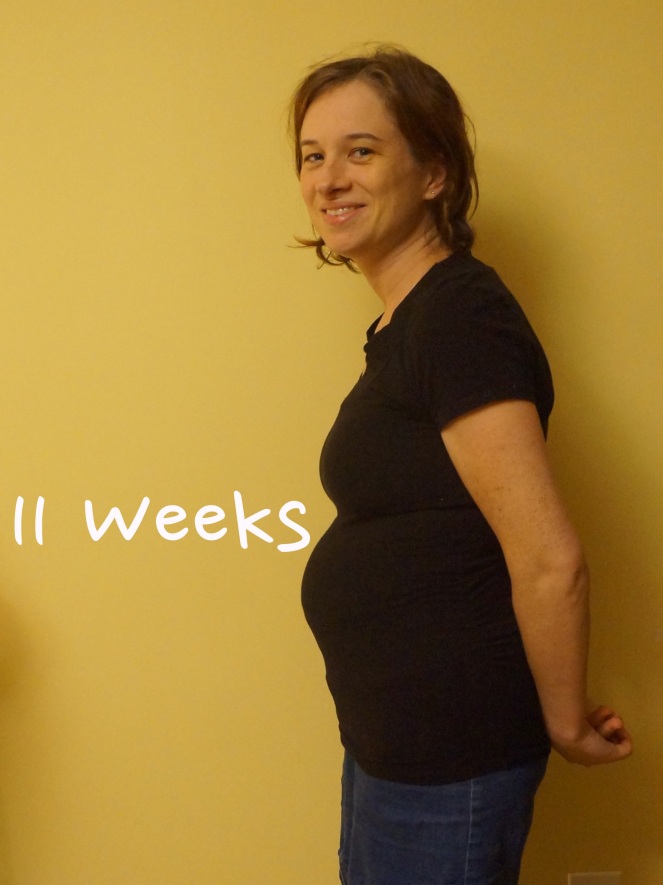 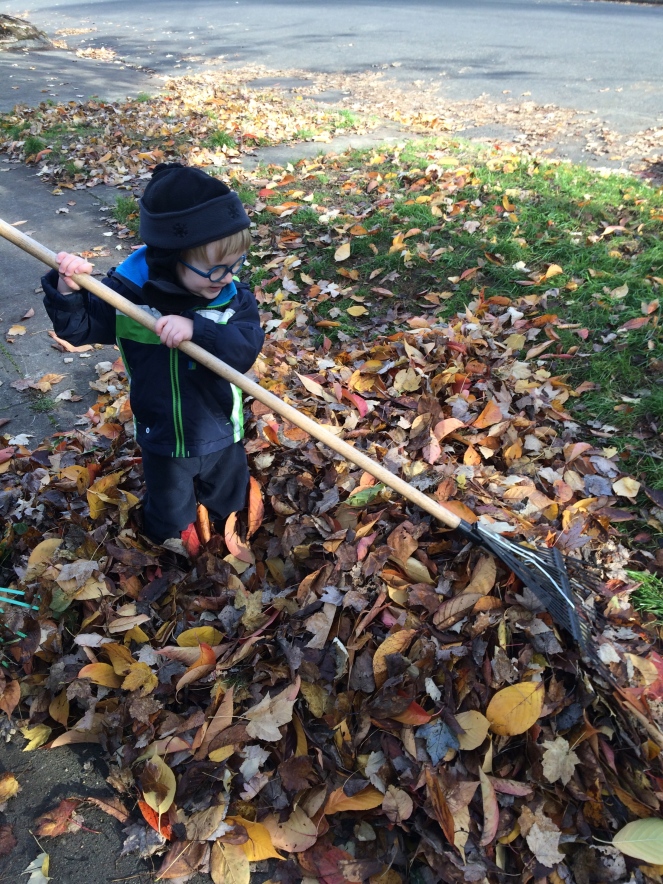 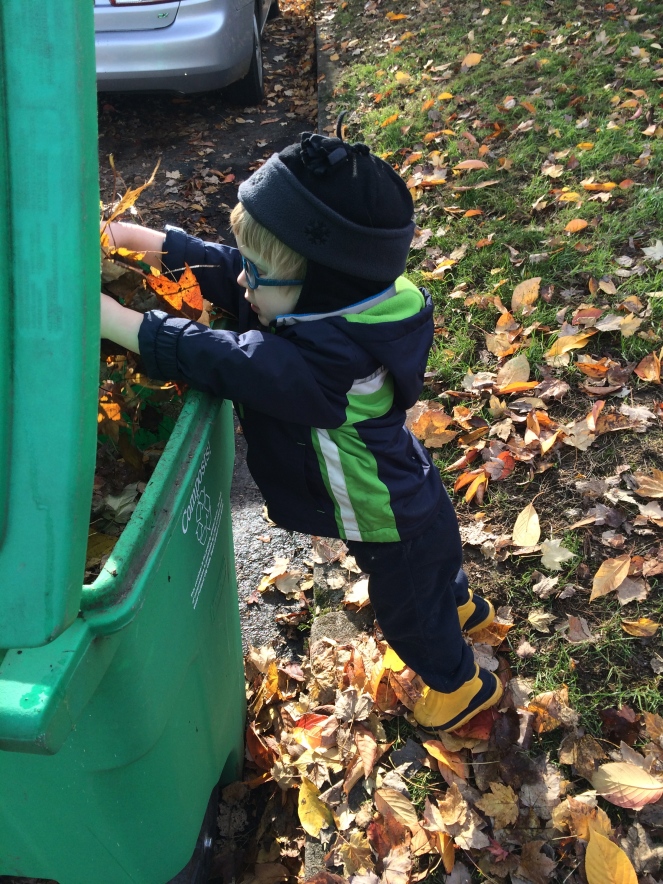 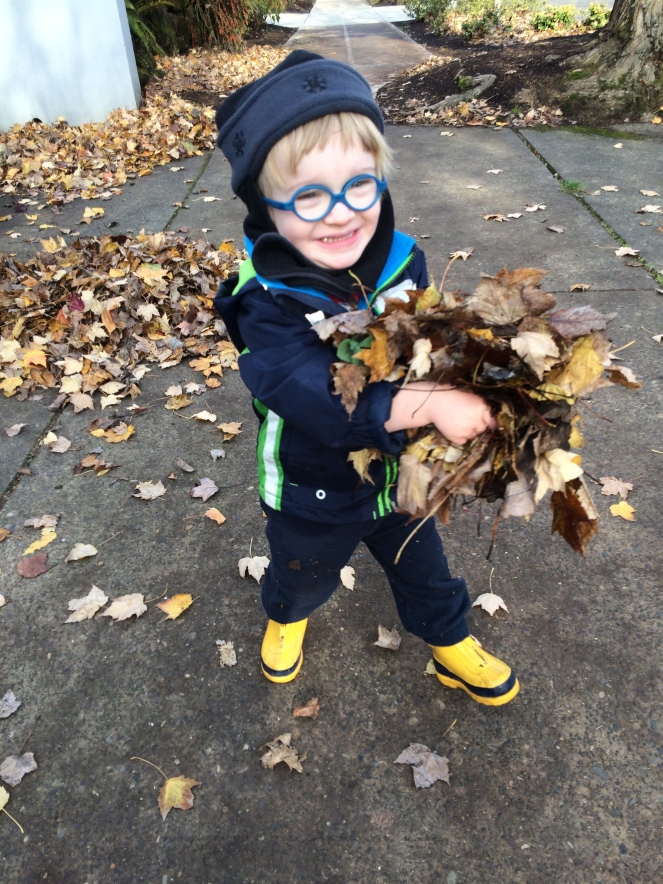 A good friend came to visit for Thanksgiving and we went to the preview night of Zoo Lights at the Oregon Zoo. It was so cold! And crowded! We waited at least an hour for the train ride. I’ve heard that it’s not so crowded after Christmas, so I think we’ll go at the end of December next time.

In the next several photos, you can see how this scene changes: There’s a bird flying from one tree to the other, the hippo comes out the water, and other animals are moving. 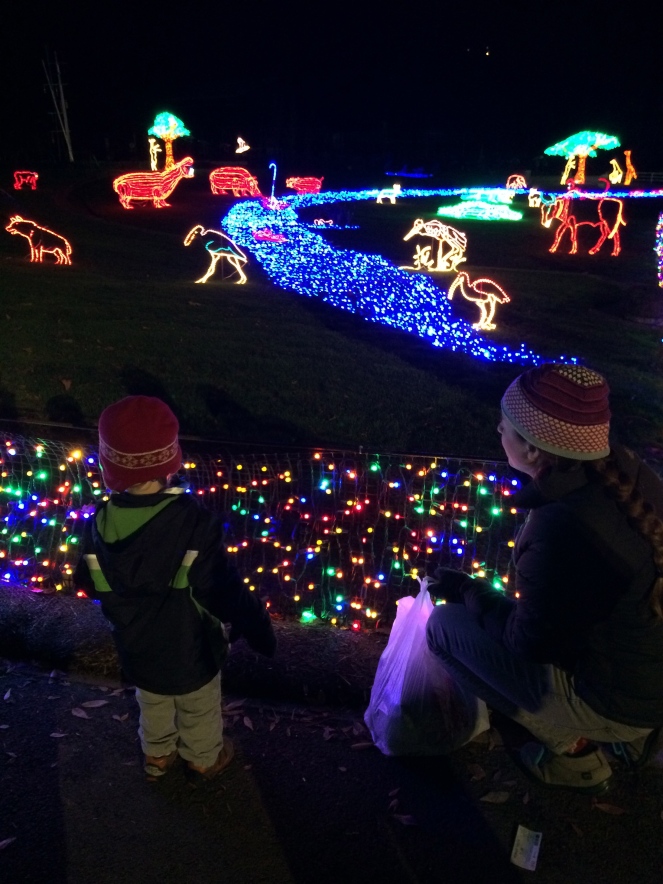 2 thoughts on “October and November 2015 – Fall Recap and a Pregnancy Announcement!”