Happy New Year! More in that vein coming, particularly our 2016 vision board. 🙂 But for now, I want to briefly review some of my attempts at cooking in November and December. Regularly preparing healthy meals and eating at home more are a couple of goals A. and I continually have and never really feel we’ve accomplished. But I’ve made some efforts I’m proud of, even though I don’t think Ari had a single bite of anything I’m posting here. (Grrrr!)

In November, I made a couple of soups I didn’t photograph. One was some kind of Thai-inspired vegan carrot ginger soup with a lot of coconut milk that I could hardly choke down (too much coconut milk for me). But the other was SO good! It was an African Peanut Stew, also vegan, made with this recipe from BudgetBytes. I highly recommend it!

After that soup, I was really craving more peanut flavors, so I tried this Spicy Peanut Butter Tofu with Greens and Rice from Emmy Cooks. The recipe is apparently adapted from this one from Kalyn’s Kitchen, which has good photos of the steps, although it looks like the peanut sauce ingredients are a little different. I haven’t tried the Kalyn’s Kitchen recipe, but the sauce from Emmy Cooks was YUMMY. However, I would say to skip the blender thing and just whisk it together. Also, I think I cooked the tofu longer in the sauce because mine got crustier looking, but I really enjoyed it that way. The style of cooking the tofu that I learned from this recipe, letting it stick to the pan, gives it a nice thick skin. Combined with the peanut sauce, it reminded me of fried chicken! But then I haven’t had fried chicken in a long time. 🙂 Anyway, here is a photo of the tofu (which I dished up with collard greens and brown rice with more sauce drizzled on top – and actually Ari did eat the collard greens!):

I made another peanut butter tofu dish that involved a different tofu preparation – pressing and then baking it – that I didn’t like as much, although it seemed like a good choice for tofu that’s going into a soup or anything else where you want it to be pretty chewy. I thought I followed this recipe from Cara’s Cravings (also adapted from a Kalyn’s Kitchen recipe) but looking back at it, it doesn’t look right, so I don’t know! Whatever I did, I must have added celery and mushrooms and done it like a stir fry, as far as I can tell from my photos: 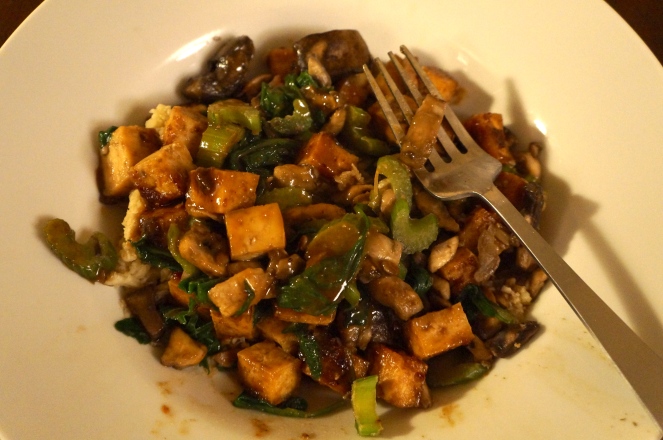 I also used this greens blend I like to buy at Costco:

Now, moving on from the peanut butter recipes to the quinoa recipes! I tried this Quinoa and Black Beans dish from All Recipes when I wanted something quick one night, using ingredients I had on hand, and I thought it was quite good! It worked out well packed for lunch the next day, too. For extra vegetables, I added some of the bell peppers I had chopped and frozen a couple of months ago after buying a bunch at Costco. I loved being able to pull those out of the freezer and toss them in! I think I sauteed them in the pan right after the onion and garlic. I don’t remember whether I made any other changes. Here is a photo of it:

Looking for another quick and easy recipe, I tried this Black Bean, Quinoa, and Spinach Stew from The Washington Post. I think I used more quinoa than it calls for to try to make it heartier. It turned out pretty bland, and I don’t think I’d make it again unless I can figure out what other spices might be good to add that would go with paprika. Here is a photo:

Well, then we got into Christmas time and I kind of stopped cooking! We’ve been eating way too much pizza and take-out again, and too many restaurant meals… But A. made a delicious green curry tonight, so we’re getting back on track!

3 thoughts on “Meals I’ve Made”