We’ve been out of town for most of the past two and a half weeks, and today school started again and we’re getting back into our home routines.

First, we had a six-day trip to Sunriver, Oregon for our annual get-together with my extended family. Then we had a weekend at home, then school was closed the following week so I took both boys up to visit my parents in Port Townsend, Washington. We came back here in time for a visit from a friend of mine over the Labor Day weekend.

I’ll just launch into the photos!

Sam and his daddy making faces in the car in Sunriver:

Biking to the swimming pool with the bucket bike we rented in Bend:

Hanging out at the pool: 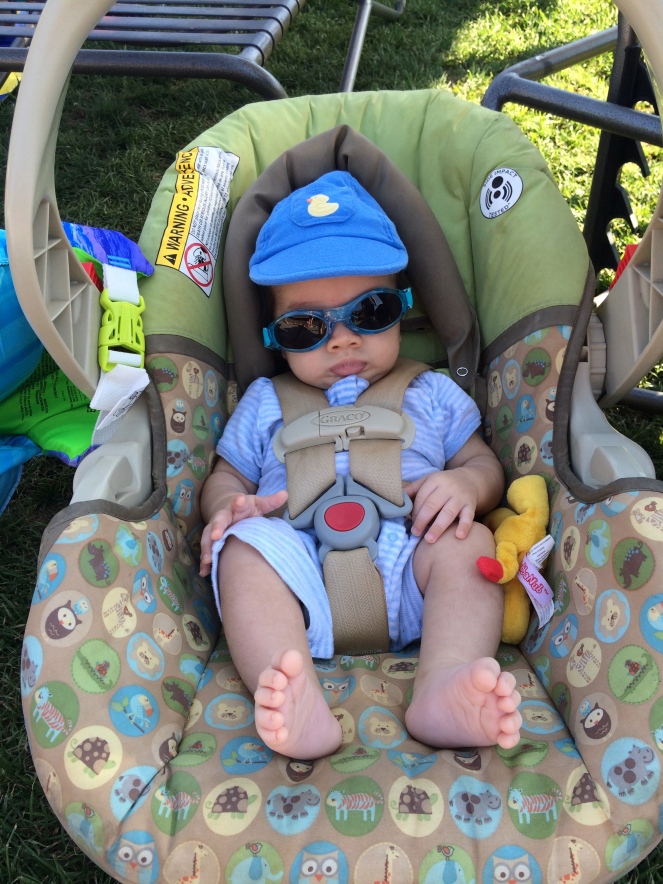 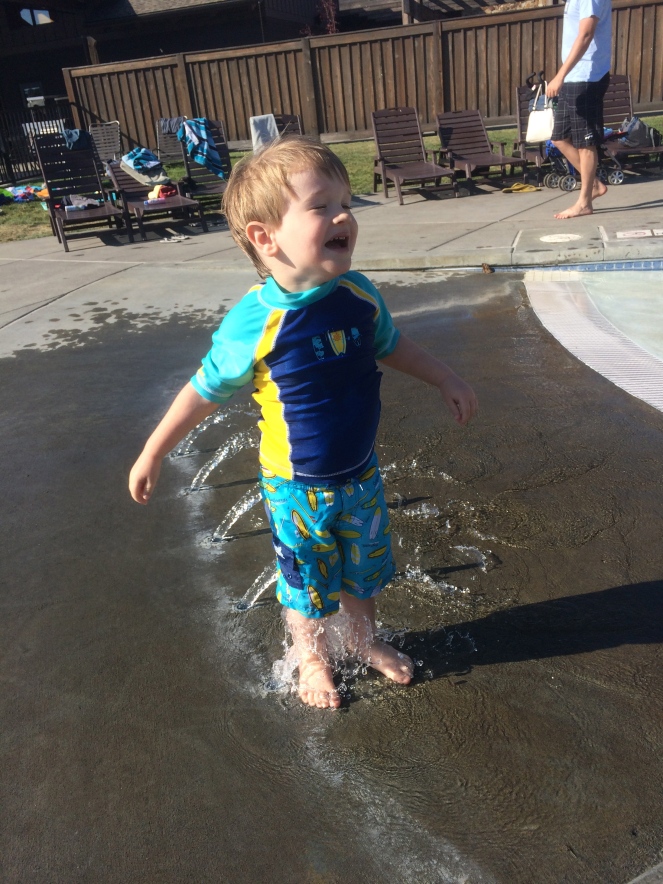 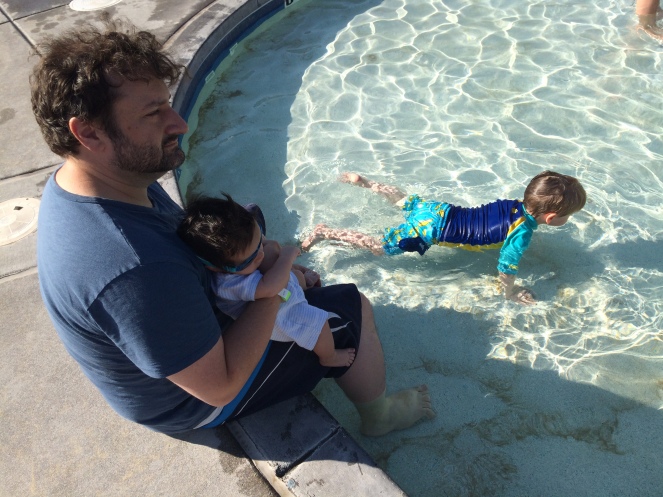 Sleeping through lunch at the brew pub:

Visiting the frontier settlement at the High Desert Museum:

What a fun trip it was! We were exhausted when we got back. But I still had Friday alone with the boys, so we went to preschool story time at the library:

On Saturday, we spent most of the day at home, where Ari played on the floor with Sam and played CDs in his new CD player from Goodwill:

Then, we went to Spring Park and Elk Rock Island in Milwaukie: 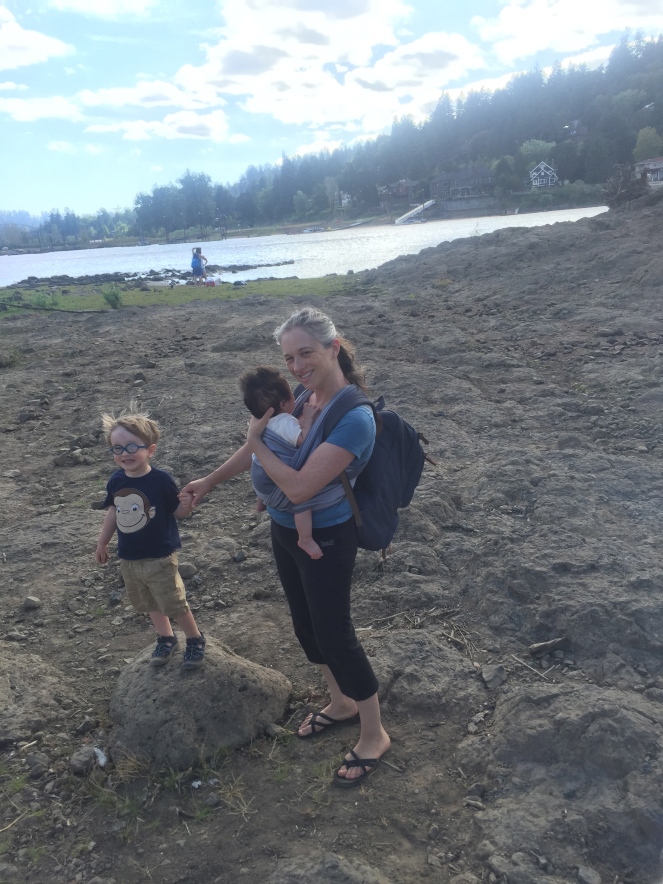 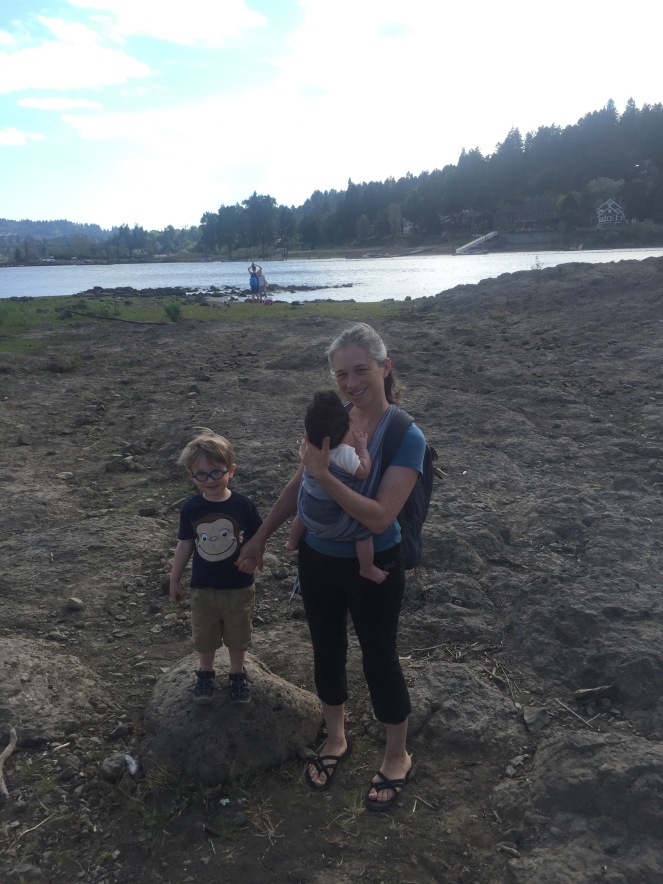 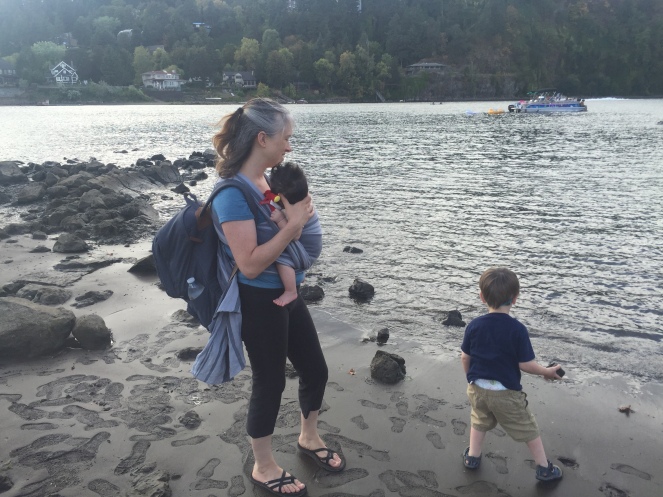 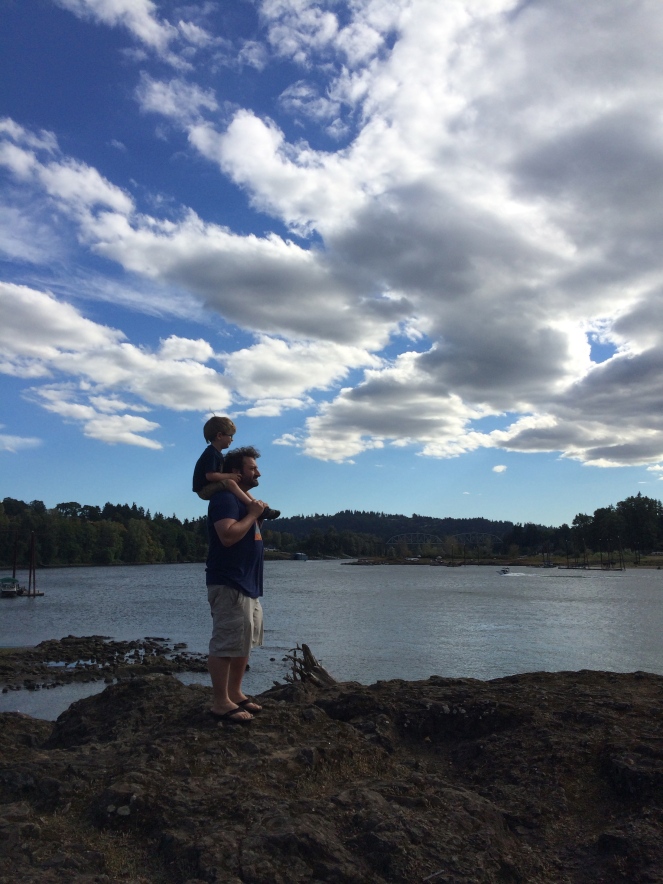 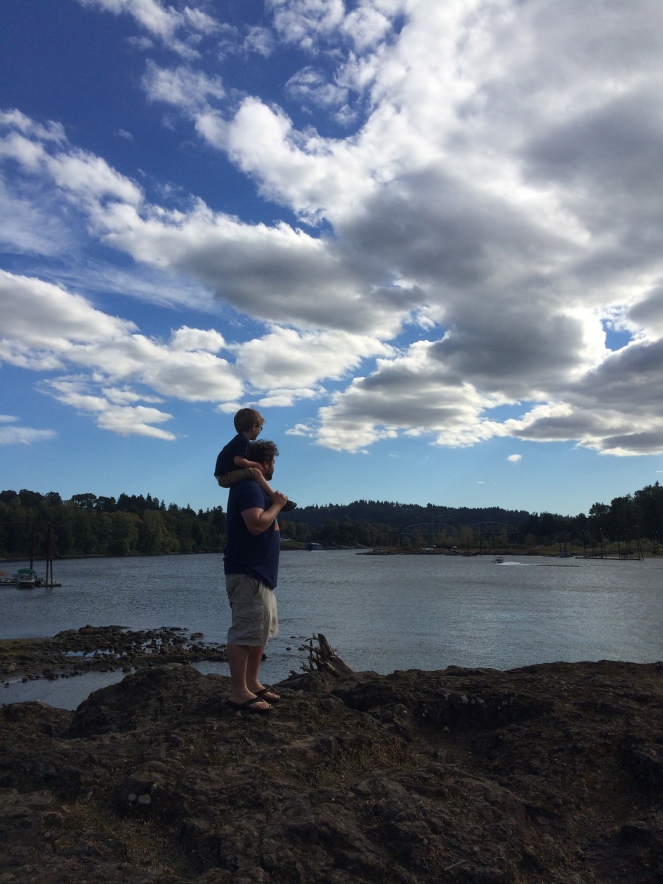 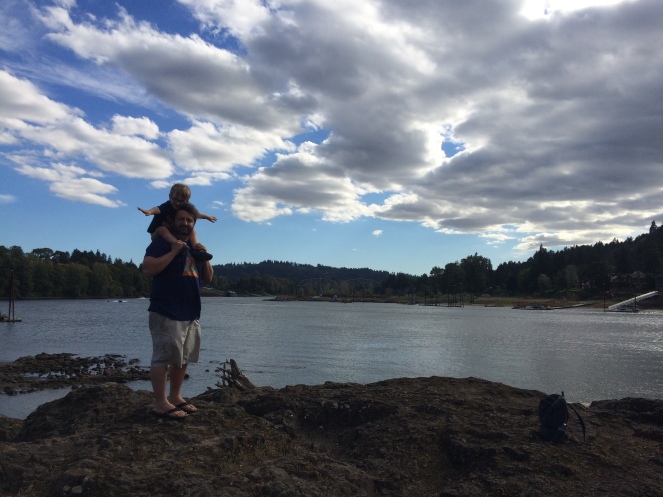 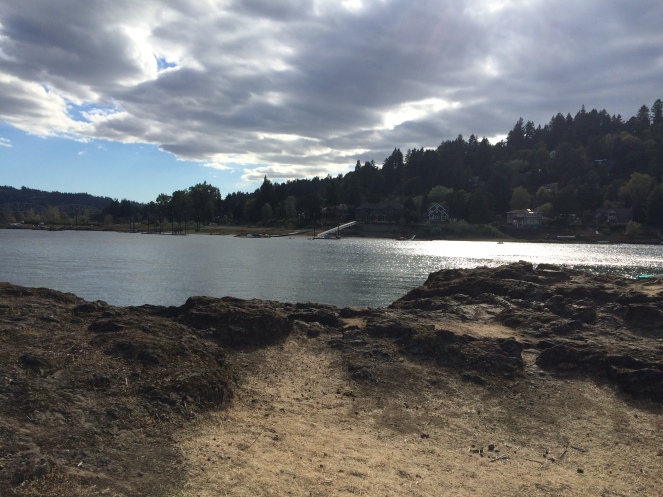 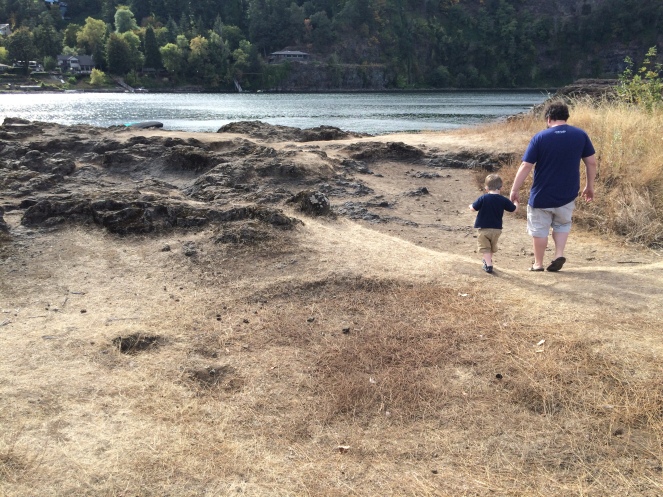 We only made it as far as the red dot:

On Sunday, we went to the zoo:

On Monday, I took the boys to story time at the library in the morning, then went home and packed and did the four-and-a-half–hour drive (which took us about six hours) to my parents’ house in Port Townsend. There, we played downtown, on a trail walk in the woods, and at their house. 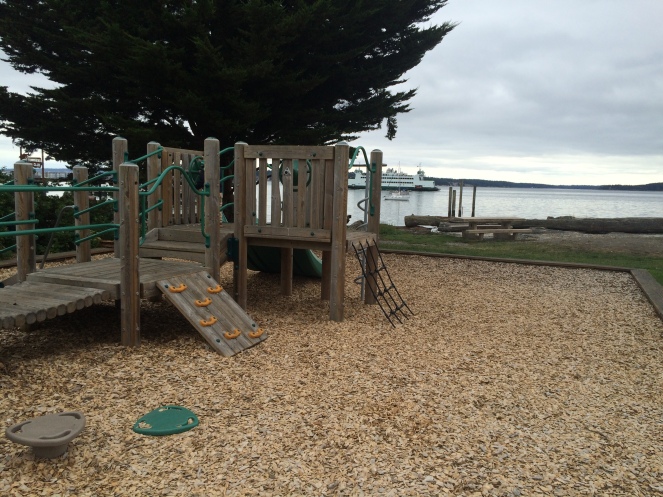 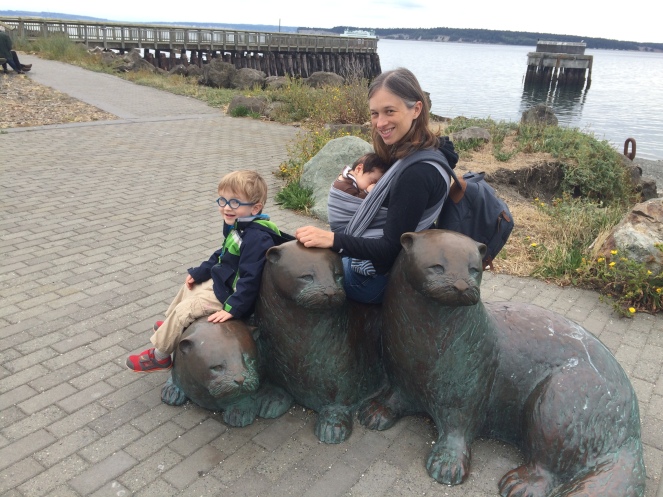 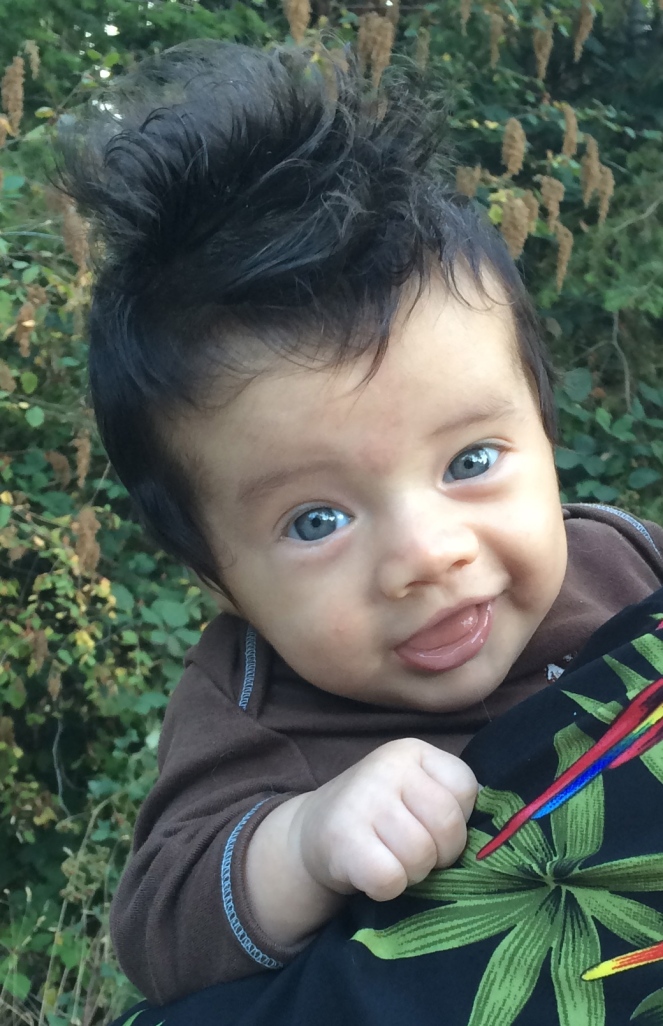 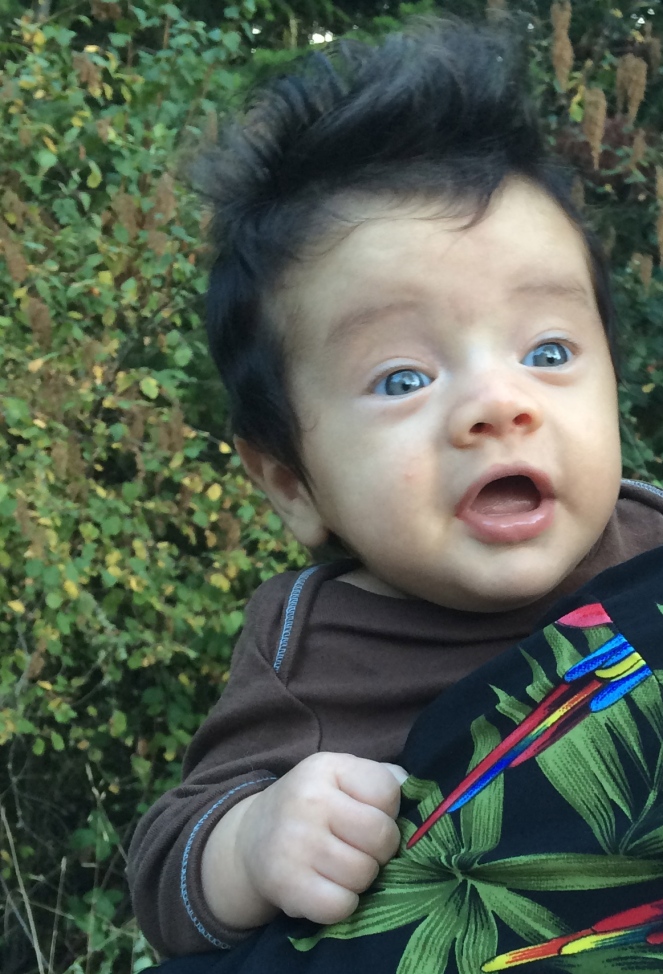 We got back to Portland on Friday, then visited with my friend from out of town on Saturday, Sunday, and Monday. We did lots of fun things together, including playground trips, eating out, and hiking. Look how well Sam is holding his head up now: 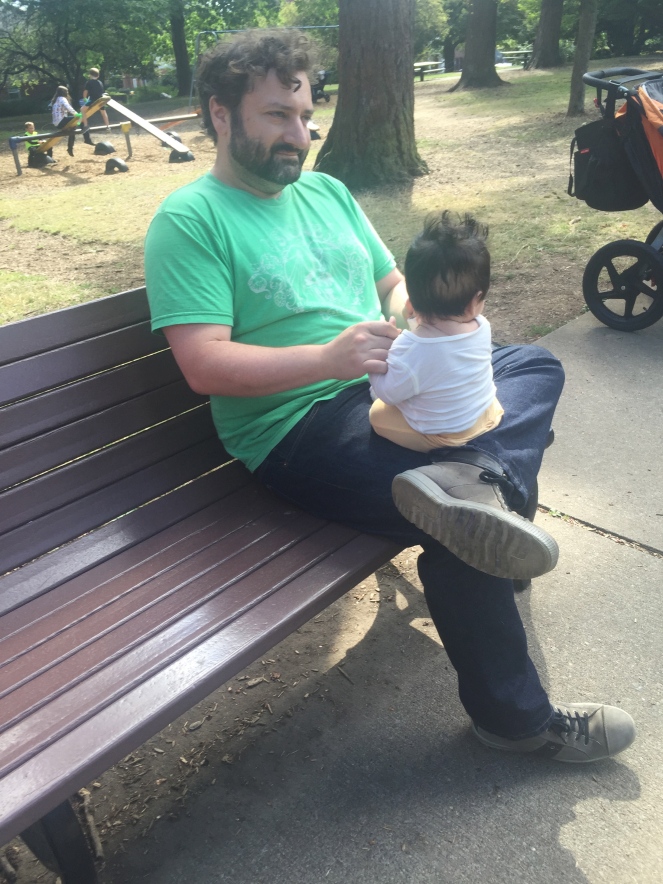 And we put him in a swing for the first time! Ari laughed hysterically. 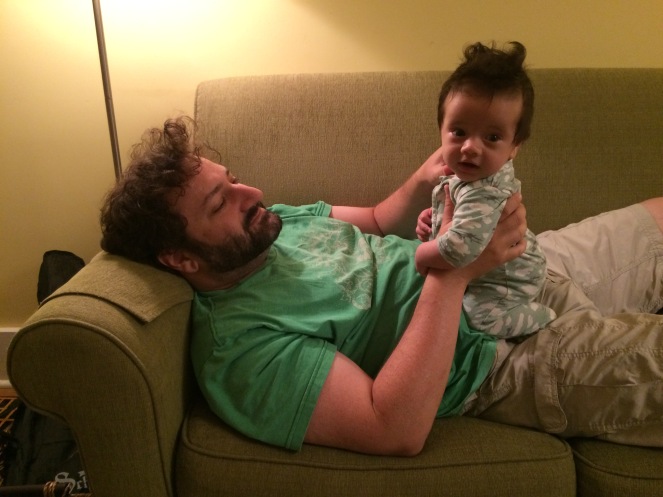 The hike we did was Walchella Falls, an easy 1.8-mile trail in the gorge, 45 minutes from our house, with fun bridges, climbing trees, big rocks, and caves. 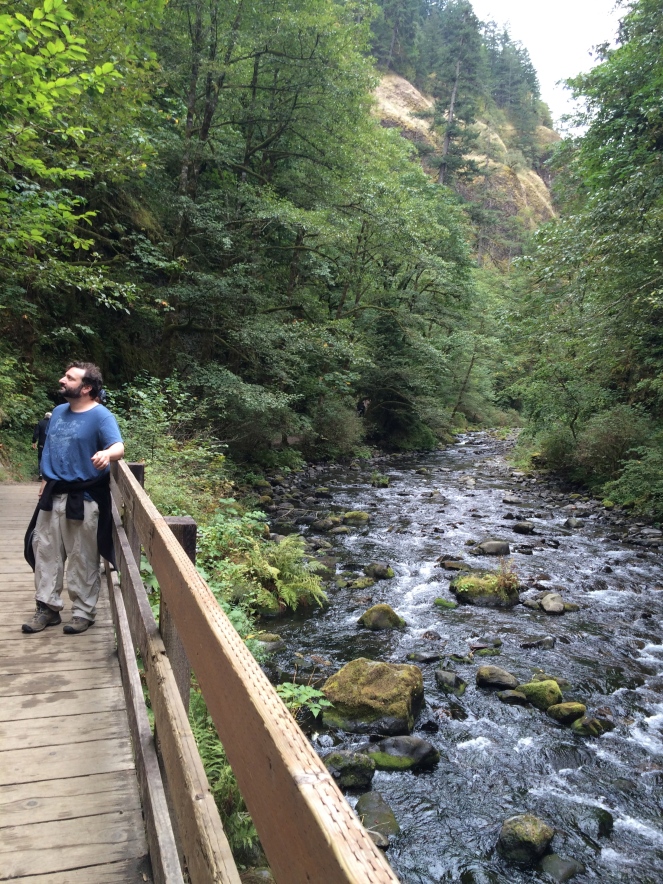 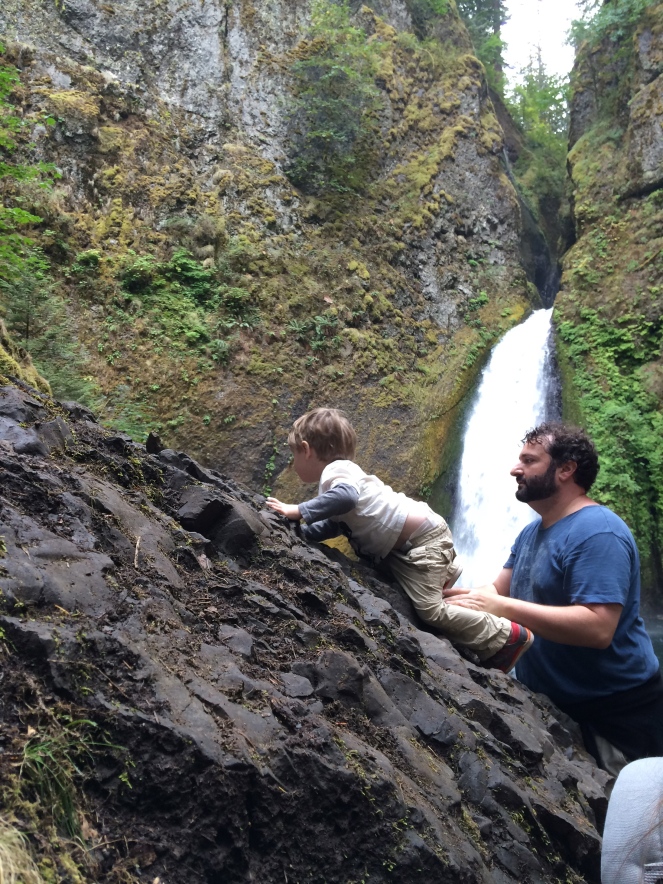 Both of them enjoying the car seat toy on the way home:

On Monday afternoon, we took Andrew to get some exercise at a nearby park that has lots of open space and usually seems pretty empty. It was our first time there, and I think we’ll be going back! 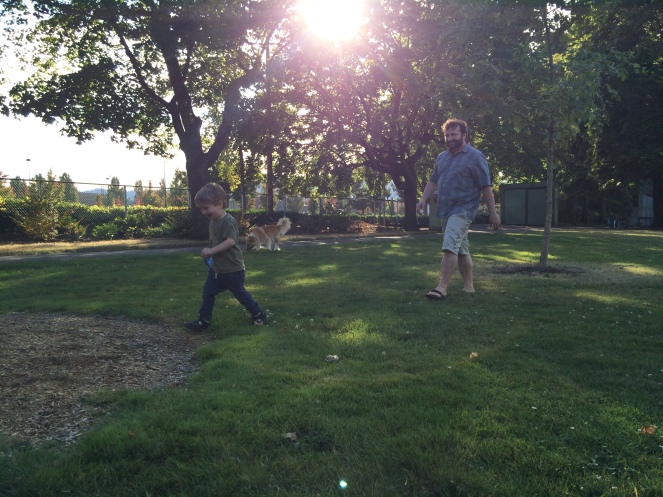 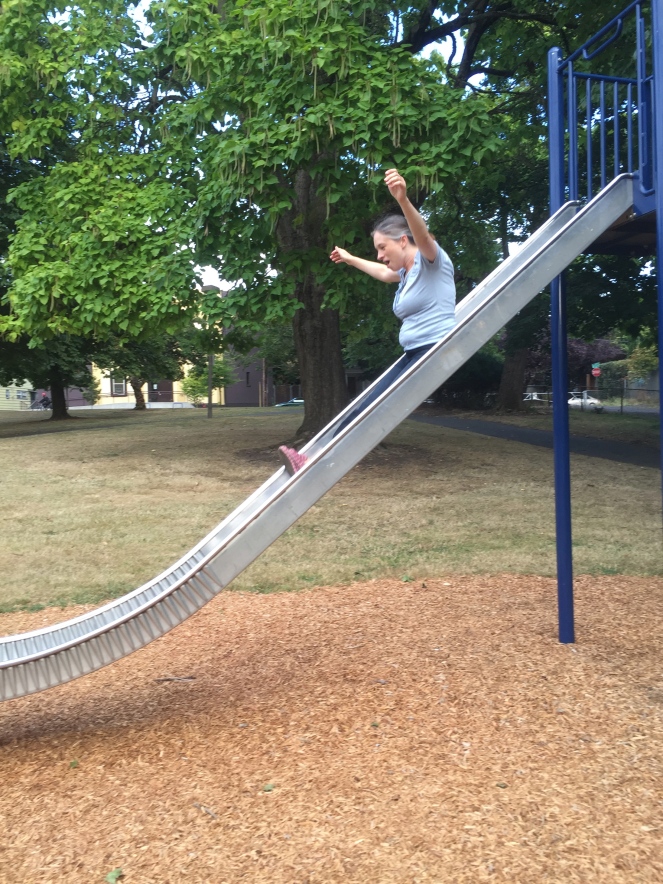 I’m trying to introduce this lovey with Sam now. Ari never became attached to one, but I’m hoping this could be something that will help Sam sleep. Some friends got it for him, so it’s one that was never Ari’s. It has a duck head attached to a blanket, and I like that it’s soft but also has the satiny edge (that was my favorite part of the “yellow blankie” I had as a kid), and it can go in the washing machine. 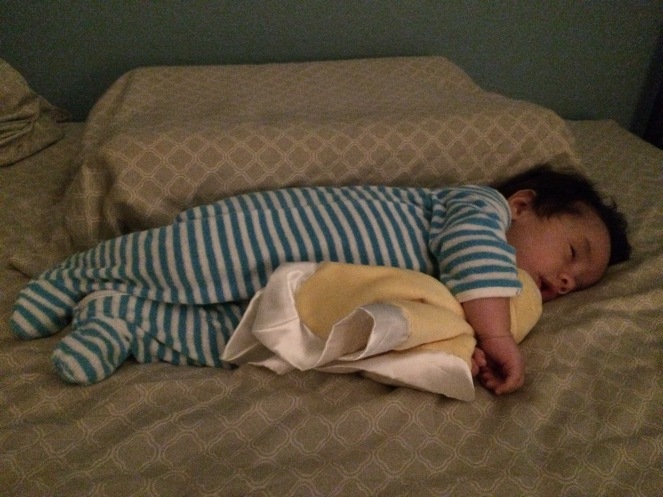 Today, Sam is three months old! He also started school!! This morning, we took Ari to his new classroom and stayed a while until he was comfortable and playing with his friends, then I took Sam down the hall, unpacked his things, nursed him to sleep, and left him there on a mat on the floor. I love that we have a whole month to get adjusted to the school routine before I’m back at work, so that I don’t have to leave Sam at six in the morning and not see him again until nine at night (yet). Hopefully he’s been content today! I love all of his teachers. Two of them have been favorites of Ari’s in his old classrooms. The space was very peaceful and clean, and for the first month, they’ll have two teachers there with just four babies. Sam is the youngest until another tiny one will be starting in November. The others are six months to a year, I think.

Here are photos from this morning: