The other day I stayed home sick from work. After sleeping all morning (hooray for daycare!), I had an urge to make a healthy, healing, fall soup. I found this recipe for inspiration and then proceeded to substitute just about everything in it. I didn’t have fresh pumpkin (aside from our jack-o’-lanterns) so I used canned; I didn’t have carrots so I used a boxed carrot ginger soup from Costco; I didn’t have a red potato but I had russets, but I baked them separately; I used canned tomatoes instead of fresh; I used stoneground mustard instead of mustard seeds, a yellow onion instead of a purple one, coconut milk instead of coconut cream, ground turmeric and dried red pepper flakes instead of fresh, and no coriander or cilantro. I also added celery.

Still, it turned out delicious! And I felt a lot better the next day.

Here are the ingredients:

First I preheated the oven to 425 degrees. Then I washed the potatoes, slathered them with olive oil and sea salt, and put them in the oven to bake for an hour.

Next, I chopped the celery and onion and sautéed the onion in coconut oil: 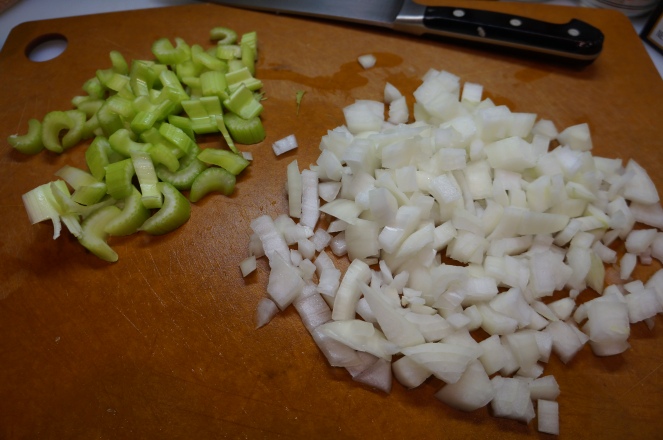 Then I added some seasonings to the pan: 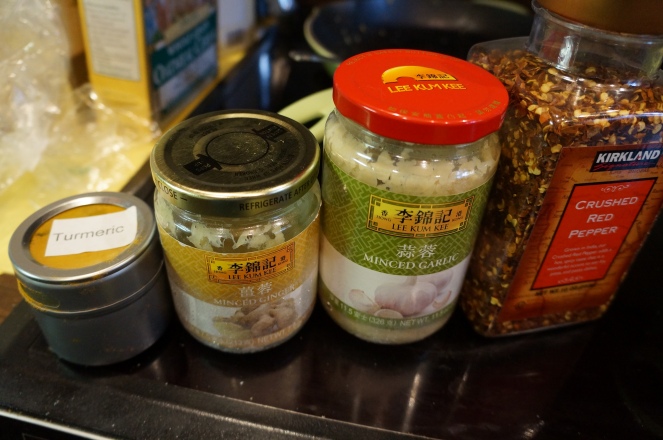 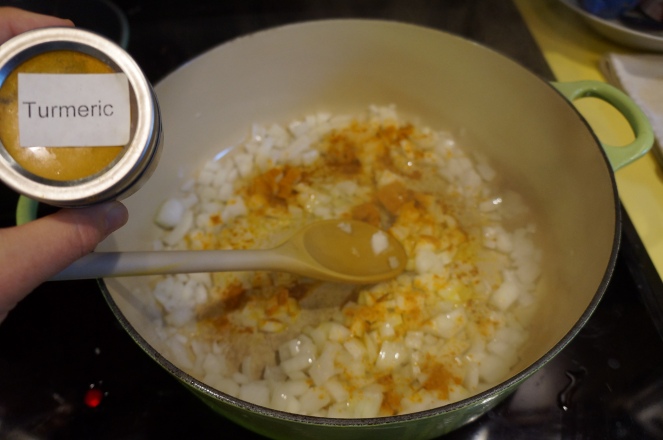 One can of pumpkin purée: 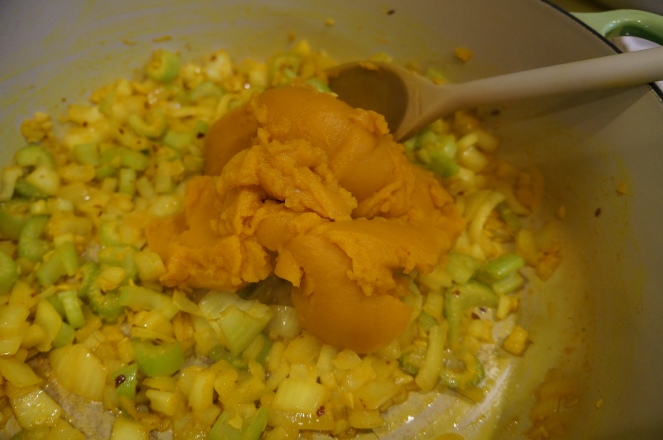 One can of diced tomatoes:

One box of carrot ginger soup: 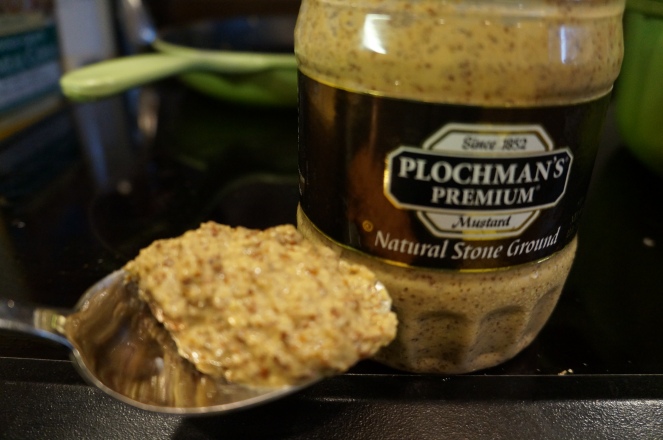 Then two cups of red lentils:

I let all that simmer while I washed this mixture of shredded kale, carrots, and parsnips I’d picked up on a whim, and mixed it up with olive oil and salt and put it in the oven to roast for 10-15 minutes at 425 degrees while the potatoes finished baking.

Once that was in the oven, I melted about a tablespoon of coconut oil over, I don’t know, medium heat? And I crushed and chopped some cashews and heated them up in the coconut oil with some raw pumpkin seeds and a large pinch of salt: 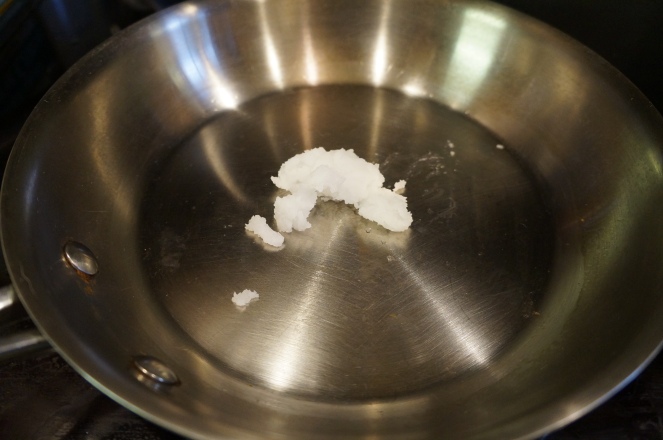 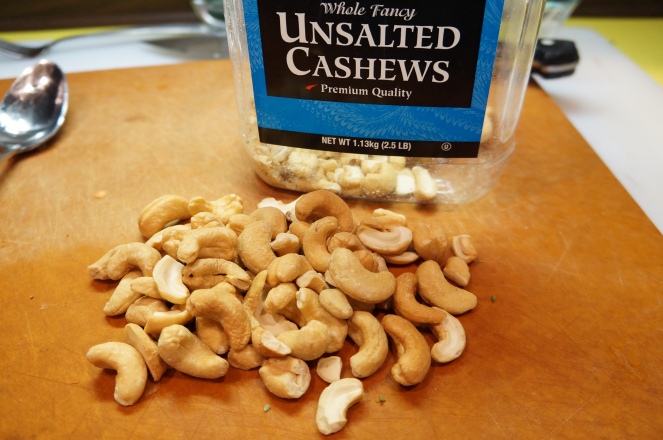 Then I remembered the coconut milk, and added a cup of it to the soup:

Then I took everything out of the oven and mixed some of the veggies into the soup: 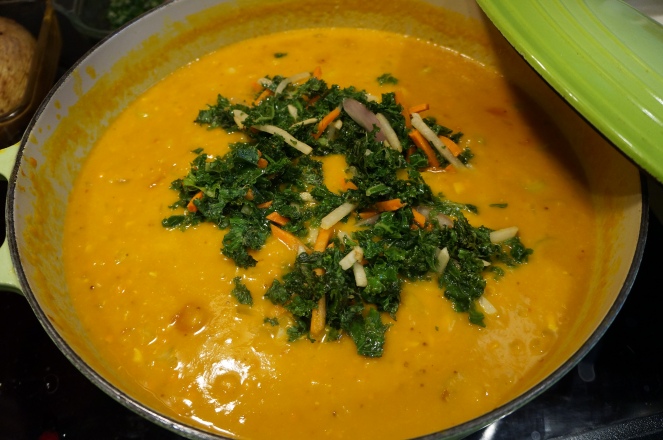 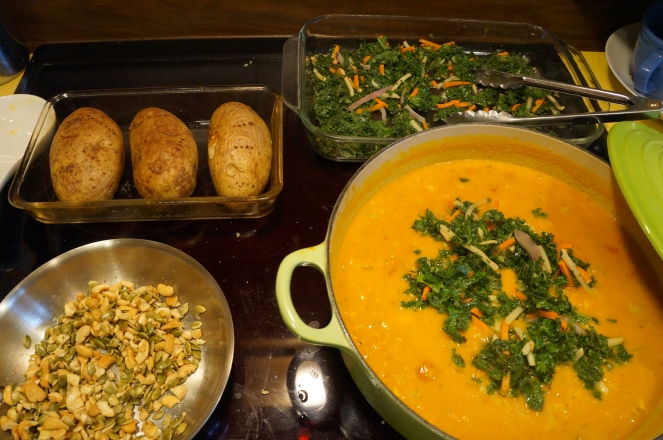 Then I puréed the soup!

Before I left to pick up the boys from school, I tried to set the table nicely. I’ve been reading a lot about feeding kids and trying to make some changes around here (more on that in a future post!), so when Ari got home he saw new dishes and silverware (kid-sized, with dinosaurs!) at his place. I also gave him a little dish with pieces of celery and onion he could taste, anticipating that he wouldn’t want the soup. The nuts and seeds and some of the roasted vegetables were on the table, along with some grated cheese, so he could sprinkle whatever he wanted on his soup or his potato or wherever. (As it turned out, he sprinkled everything right onto his plate and actually tasted it all!) We also had bread and apples and the baked potatoes, to make sure there would be some part of the dinner he would like, without making him something separate. I also set his soup out early so that it wouldn’t be too hot.

After we got home, we got everything served up:

Sam looked really jealous watching us eat! I can’t wait until we can feed him more. The soup has too many ingredients to give to him now, and it was fairly spicy, but I froze some in ice cube–style baby food trays for later.

Another recent change for Ari is that he’s finally sitting at the table with us! Instead of a booster or junior chair, we got a Kaboost thingie that goes under the chair. It’s pretty neat, and he seems to enjoy being with us in a “regular chair”!

There was too much food! But I felt that I had successfully nurtured myself and my family, and the soup was delicious! Think how well I could feed us all if I were home every day with childcare – ha!