The bathroom was a multi-step process! Here’s how it looked when we took possession (these two photos are by Jan Carlisle): 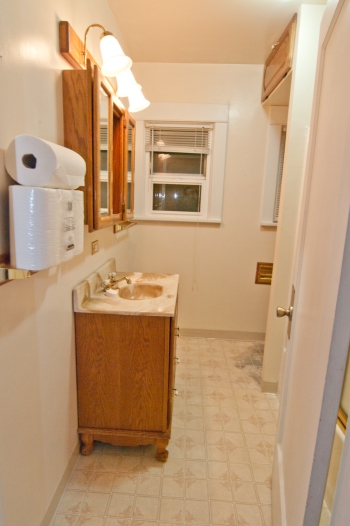 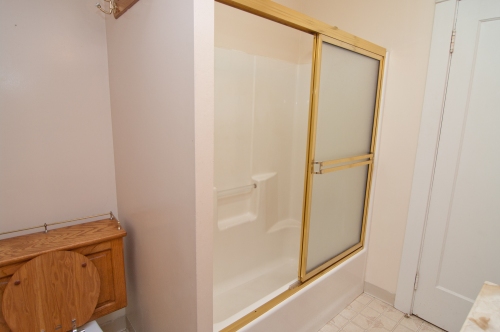 We might not have done much to it right away, but there was water damage around the toilet so it had to come out, along with some of the flooring. We also had to take out the vanity and cabinet for the painters. We put the vanity on the sidewalk and posted it on craigslist and someone picked it up, but no one wanted the toilet so it had to be thrown away. I don’t remember what happened with the cabinet. The lights were taken to Portland’s ReBuilding Center.

Here’s the bathroom after the painting: 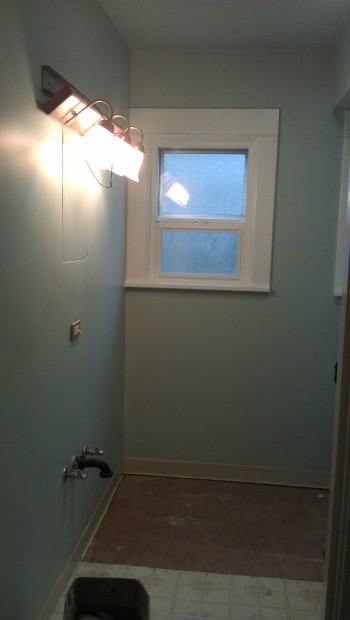 For a while, it stayed just like that. We put a new toilet in it and used the kitchen for washing our hands and brushing our teeth. There was no mirror, so I gave up on makeup and A. shaved less. Once the tile guy (a wonderful guy who kept costs down too — Keith Amundsen Installations) started working on the floor, the toilet had to be out for long periods of the day. I was just hitting the part of pregnancy where I was having to go to the bathroom all the time (still in it!), and I was trying to sleep in between night shifts at my new job, and we got Andrew during that time, so it was very…stressful. I’d get home, go to sleep, get woken up by Andrew barking at Keith when he arrived, spend a little time with Keith, go back to bed and sleep through all the noise in the bathroom right next to my head, get woken up by Andrew needing to go to the bathroom, find that I also desperately had to go so I’d walk to Jan’s house or the tea shop, go back to bed, get up again for another potty trip… I was very tired at work at night! Also Andrew would pee in the house if I ignored him while I was talking to Keith, so then I’d have to spend time cleaning that up — and one time he peed on Keith’s jacket. Arrrrrrrgh.

There were several stages to Keith’s work, and for a while it was just paper on the floor, but here’s how it looked after the tile was done (yay!): 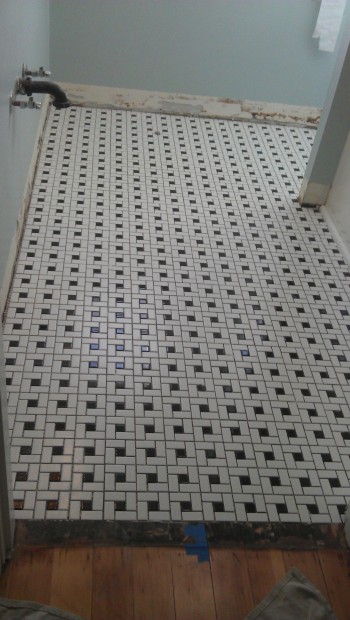 Then Birdseye Hardwoods came back to put in the baseboards and clean up the transition from the wood floor, and the painters came back and did touch-ups and painted the baseboards. When the wood floor guy finished his work, he carefully brushed on a nice, even coat of sealant and left instructions to stay off of it for a few hours — then as soon as he left, Andrew ran over to check it out and slid right across the sealant, before I could catch him. There are now faint paw prints and skid marks on that part of the floor! Oh well… 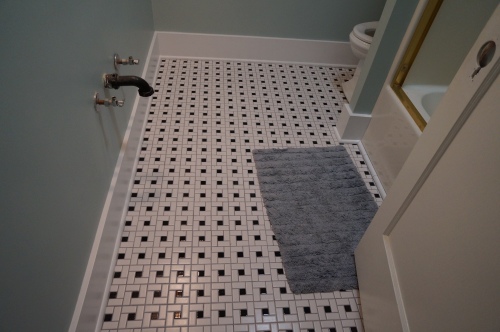 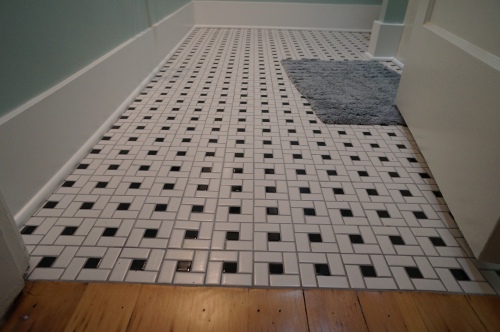 We ran into trouble when Keith put the toilet back in and the collar on the pipe made it sit too high for the floor. We’d had a plumber come in to see about fixing that before the floor was done, but he said he thought it would be fine. (I may have let him think the final floor height would be different from how it actually was in some kind of screwed up effort to be agreeable…assertiveness lesson learned!) So now the floor was finished nicely but the toilet was sitting on some boards. The plumbing job was going to cost more than we wanted to spend and when Keith realized we might just leave those boards on the floor, he couldn’t take it so he told A. they could try to do a simple fix together for a lower cost — so they spent a day in there with some power tools and got the job done! 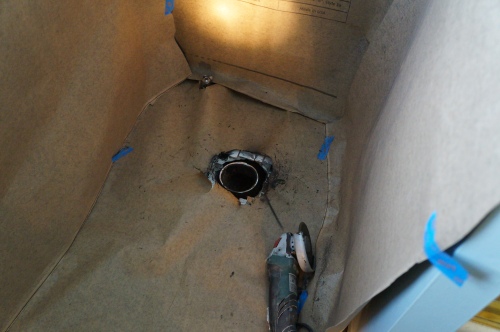 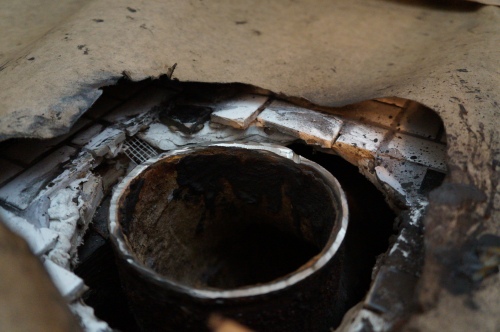 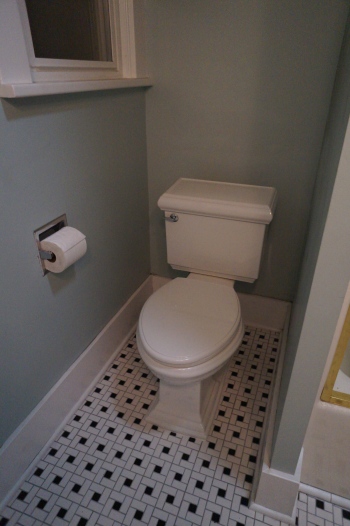 Next, we put together our shelves and vanity from IKEA: 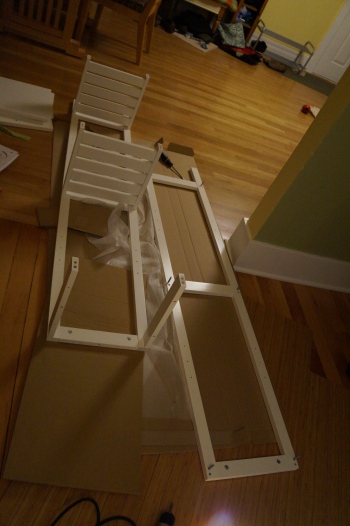 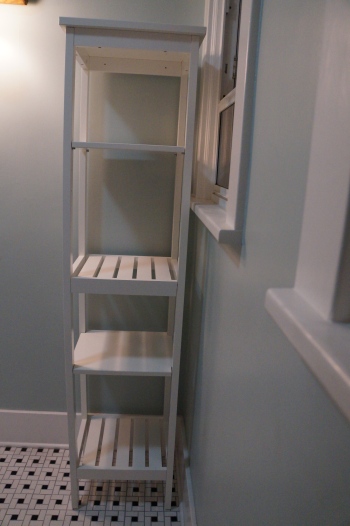 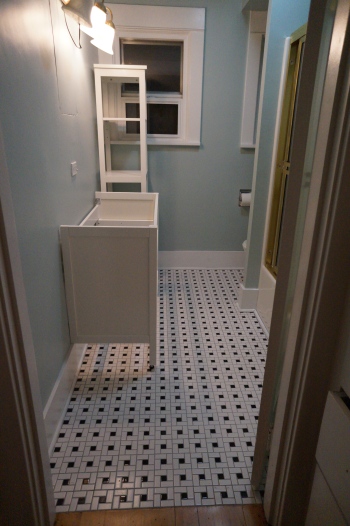 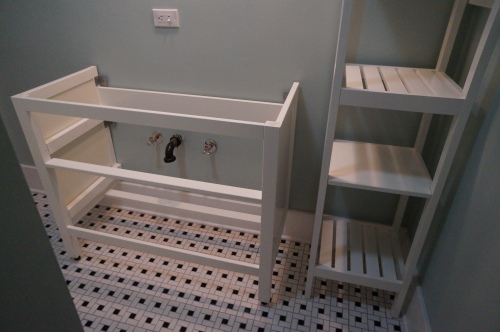 The vanity needed to sit lower on the baseboard, so A. bought a little power saw thing and cut these notches out — scary! 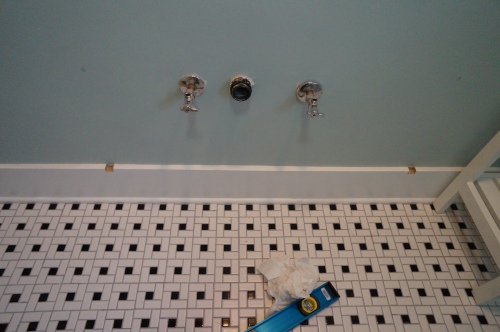 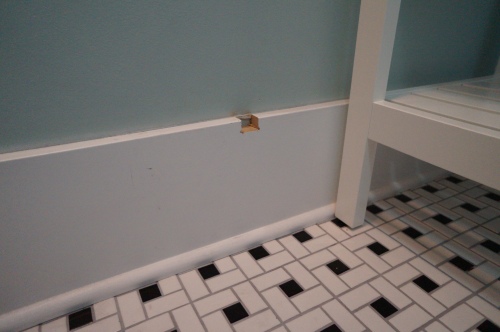 Apparently IKEA sinks are made for European plumbing, which takes up less space than typical American plumbing, so A. found a tutorial online and fixed the plumbing: 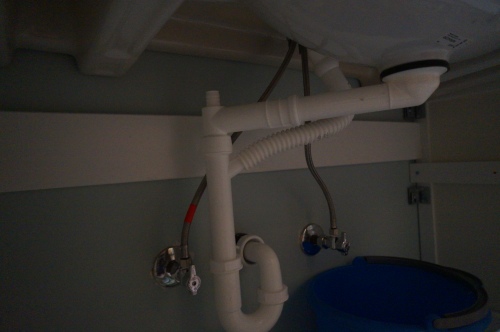 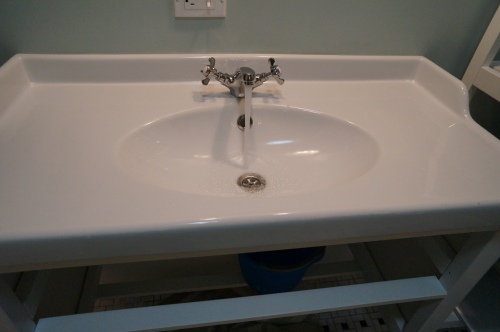 Here’s how it all looked after the shelves, vanity, and sink were done: 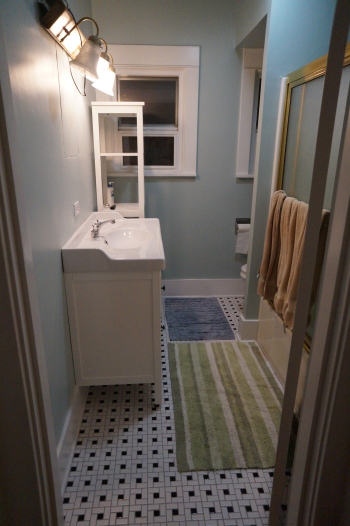 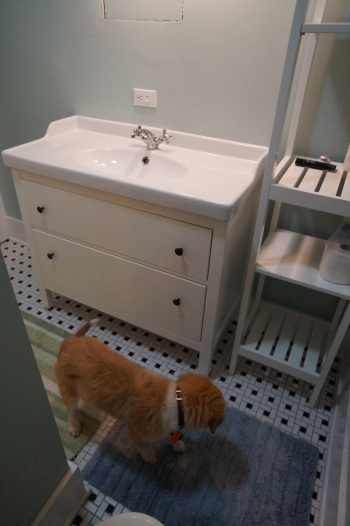 Then it was time to put together and install the cabinet! A. figured out how to get it mounted with a board behind it, and he did a great job: 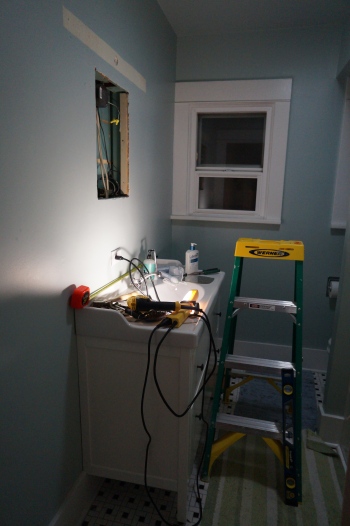 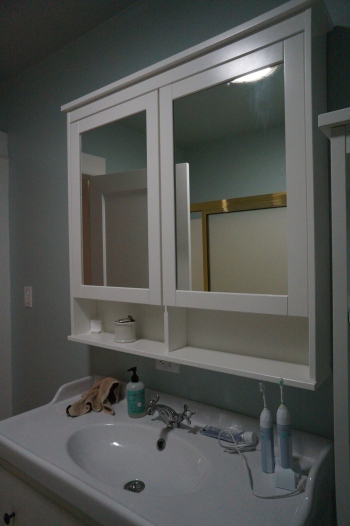 We made do with the overhead light until A.’s dad came to visit and together they installed our new lights. We also bought and put together some lower shelves to fit better under the lights. The cabinet had to come back down for the wiring to be done, and A. found it to be much easier with his dad for lifting help instead of a pregnant woman! I found it much easier, too… Also, A.’s dad helped me install the towel bar, towel ring, robe hook, and mirror. Ta-da! 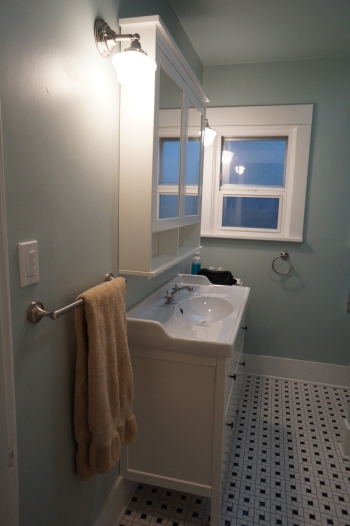 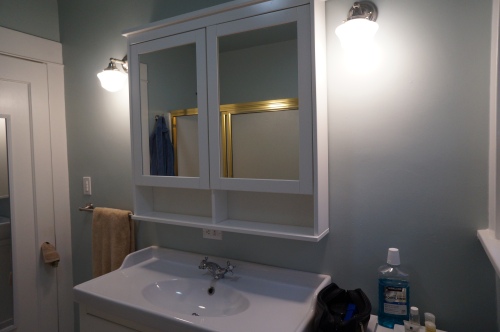 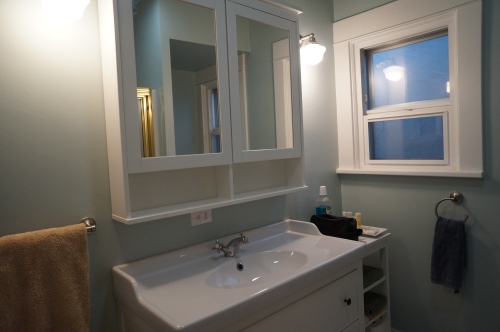 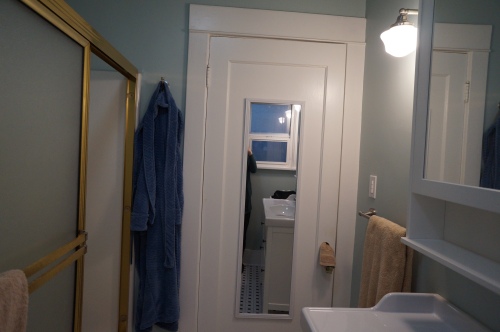 3 thoughts on “The Bathroom”