And just for fun… 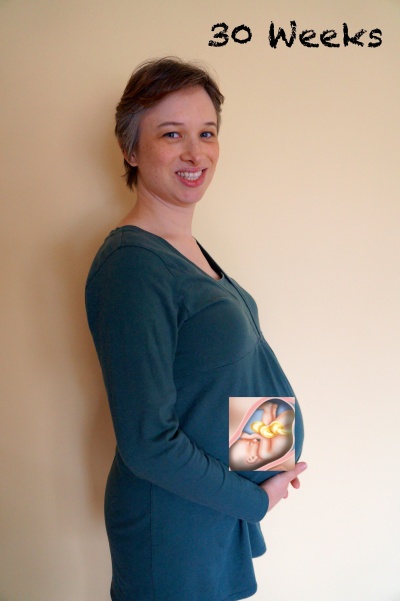 We stopped at a cute thrift/antique store and I got these things for $15.50 total! Jan found the baby book, and I’m really excited about it because my baby book is also Peter Rabbit, and I was trying to figure out what to do for a baby book because I only do online photo things these days. 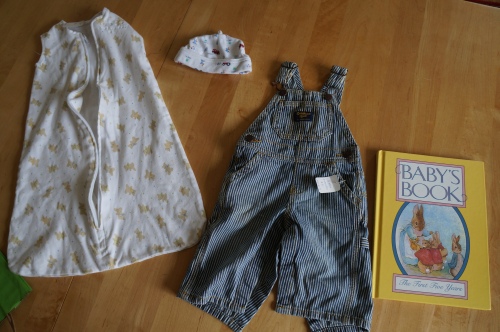 Here is a close-up of the hat:

We also got this car seat from Jan and Pat. It’s so cute!

I really should have removed the registration label before I photographed it… Anyway, we seem to be having an elephant theme (I do love elephants!) and the seat happens to have this little detail:

I’m not sure where we’ll put it in the car. Apparently it’s supposed to go in the middle seat in the back, but that doesn’t leave much room for Andrew on either side, and he’s probably still growing. If we put it behind one of the front seats, whichever seat it’s behind won’t be able to slide back far enough for A. (or most people, besides me) to be comfortable. Hmm. Anyway, the seat part separates from the base so it can be carried around, and when you set it down, it rocks! (I mean literally, it rocks back and forth.)

Yesterday we cleaned house for Patrick’s birthday party. And then I actually cleaned up right away after the party! I’m a grown-up!! It may never look this good again, and the party was really fun. 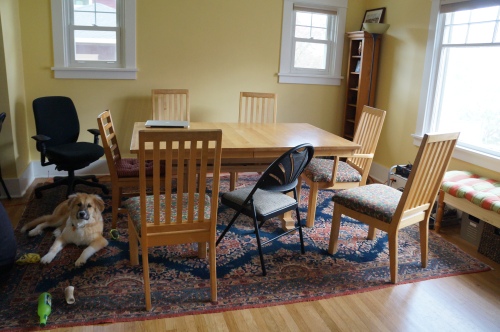 Oh, one more picture I forgot to post earlier. I got this changing table on craigslist, from a cute little family with a toddler who has outgrown it. I hope we’re done with diapers before our kid is that big! Ack! It was $15 but I paid $20 because the guy found this burlap in their Halloween decorations and helped me tie it to the top of my car.

Okay, so, 30 weeks into pregnancy — this week has been a roller coaster! The other night I was up at 3am (that’s every night, actually, thanks to the night shifts) sobbing about everything, especially Caleb and the mama cows whose newborn calves are taken away from them so they can make milk for the yogurt I keep eating. It makes me so sad, but I keep eating it! It started with trying to imagine how I’m going to feel when I get to see and hold the baby for the first time — I’m already ripped in half thinking about Caleb or how I also love my new baby dog Andrew; how am I going to handle so much feeling? I’m going to FALL APART! I was reading about how pregnancy and new motherhood are a big life development stage and you have to let yourself fall apart and be put back together differently. That ties in with all the people telling me how I’m going to see everything differently and not care about things I used to care about and not want to do the same things I want to do now. It’s making it hard to plan for the future!

The next day, I felt extremely cranky all day because I can’t get up early in the morning and get things done when I’m still awake at 3am, and the house was a mess and everything’s a mess and I’ll never have time to do everything right and my baby will probably end up starving in dirty diapers because I’ll never get around to washing his bottles or diapers (or pumping at work!). Also, it takes so much energy just to feed myself – the meal planning, shopping, prep, and cooking – and making it healthy food is even harder. Then once I finally eat something I’m hungry again two hours later! I can’t keep up! Especially not when I have to go to the bathroom every 5 minutes too (SOMEBODY needs to get off my bladder sometimes!). I often just can’t figure out where to get started with things. So it was perfect the next day, when we agreed to host Patrick’s birthday party and my job for the day became cleaning the house. It was very peaceful and pleasant!

The other thing making me cranky that day is that I was trying to find a way to hire people to help with some things and even that was turning out to be really hard and time consuming. A. keeps trying to talk me into letting someone else clean our house, and I finally thought that might be a good idea, but I was totally unsuccessful finding someone on Yelp or craigslist. For all the trouble, I might as well clean it myself! Same thing with the lawn. I got a couple weeks behind so I can’t do it with the push mower, so I just wanted someone with a powered mower to come mow it. It’s not that big or difficult. But finding someone and actually getting in touch with them and arranging a time and getting them to tell me a price all turned out to be really hard. Finally someone did come do the lawn though. I think it cost too much, but he came at the end of the day and worked until dark and now the lawn looks great and if I keep up with the push mower every few days it can stay that way. It was funny, though, the guy talked to me for a while about how I should be cutting it while I was paying him, and at one point he stopped and asked, “So, where’s the man of the house?” I said, “He’s inside cooking dinner.” And then some other explanations for why I’m taking care of the lawn that he didn’t really need to hear, but anyway, it was funny. I should have told him, “Well, my wife…” Whatever. I might actually hire this guy regularly because his weekly rate is good and I probably won’t be able to mow when I’m closer to the end of the pregnancy and when I have a newborn.

I’ve also been more absentminded and clumsy lately. The other night at work I scanned my patient’s medications, so they were charted as given, then started talking to her, then I couldn’t find the meds. Fortunately she was with it, because I said, “Did I give you those pills?” and she said yes and laughed and said it’s only going to get worse after he’s born. I had NO MEMORY of giving her those pills! The other day I was looking all over for the tea bag I knew I had put somewhere because I had just thrown the wrapper away, but it wasn’t in my mug, and then I found it in a water glass. It’s like early Alzheimer’s. Maybe it’ll get so bad I won’t be able to work and I’ll have to get disability pay!