Ari had his 9-month well-baby appointment and is finally caught up on his vaccinations until his one-year. He weighed 18 and 1/2 pounds and was about 28 inches long, putting him now between the 25th and 50th percentiles for length and the 10th and 25th for weight. He used to be closer to the 50th percentile, but the pediatrician said it’s normal for them to slim down when they start being more active.

We all went through ANOTHER round of being sick. Ari had a few nights of fevers and some cranky, sleepy, runny-nosed days. I am so tired of these colds!

We did have a nice time at Jan’s house one day when it was amazingly warm, almost 70 degrees, and I was off work. Andrew and Baker ran around and wrestled and Ari got some outdoors time. He was not a fan of sitting in the grass: 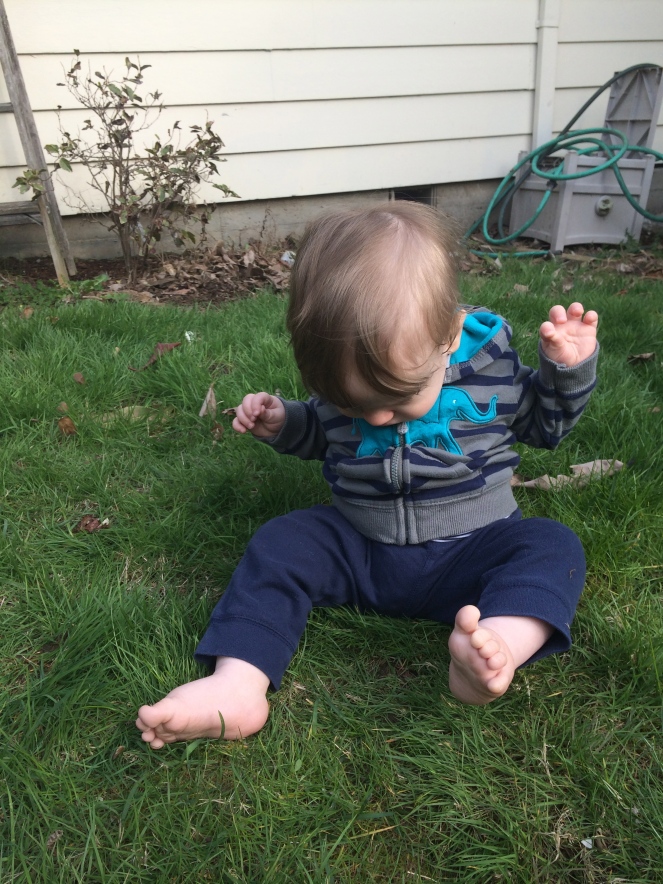 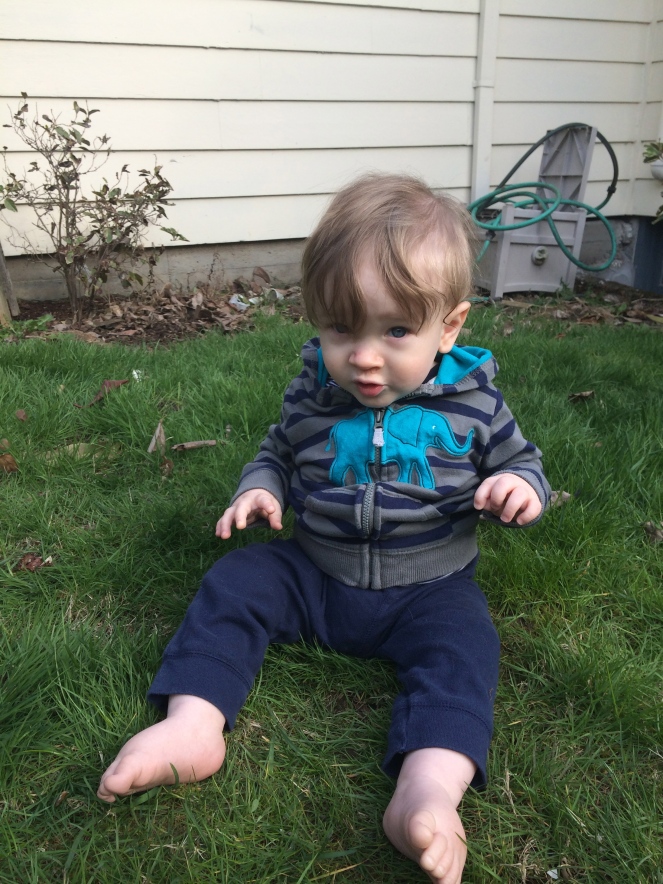 But flower petals and mossy rocks were interesting: 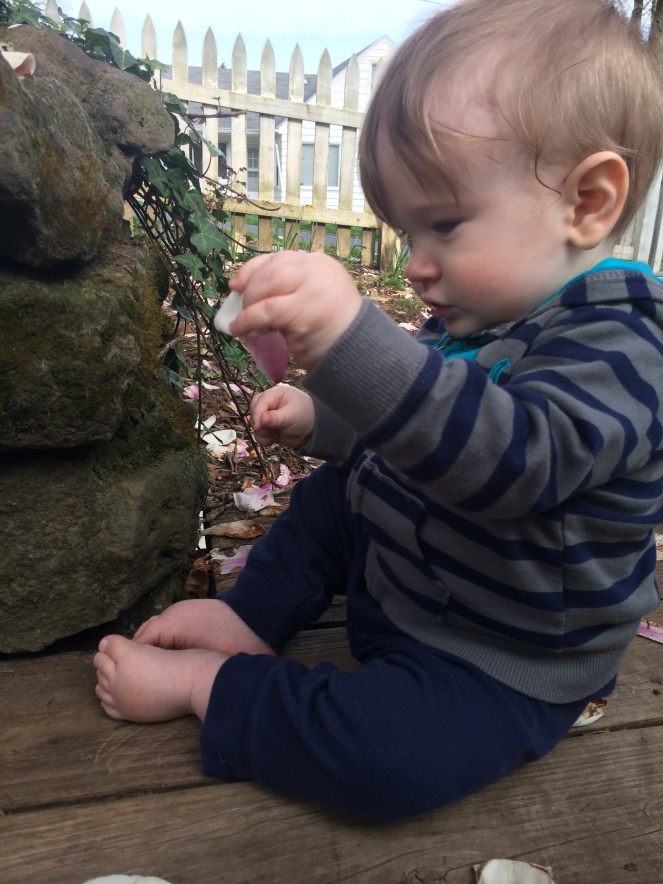 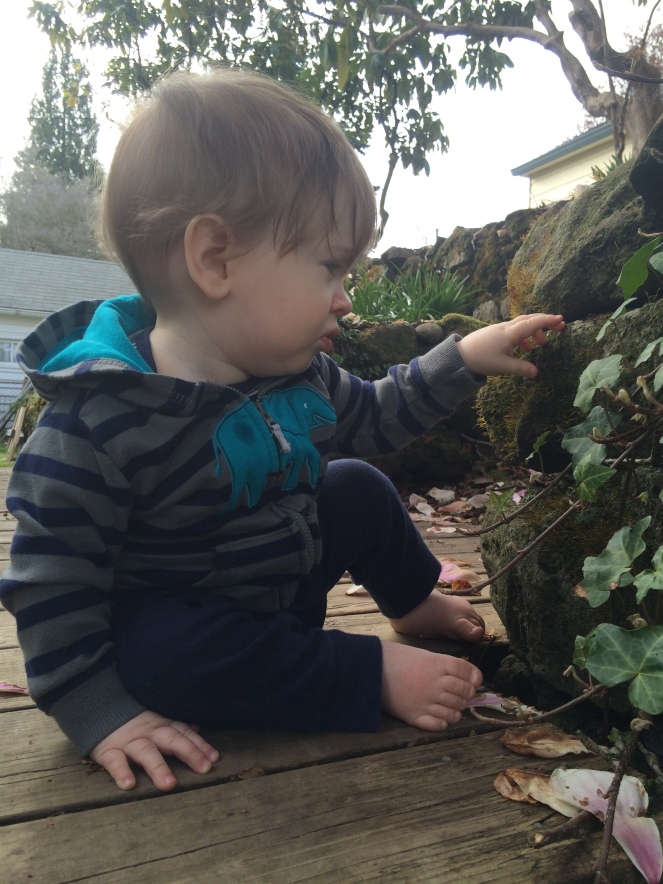 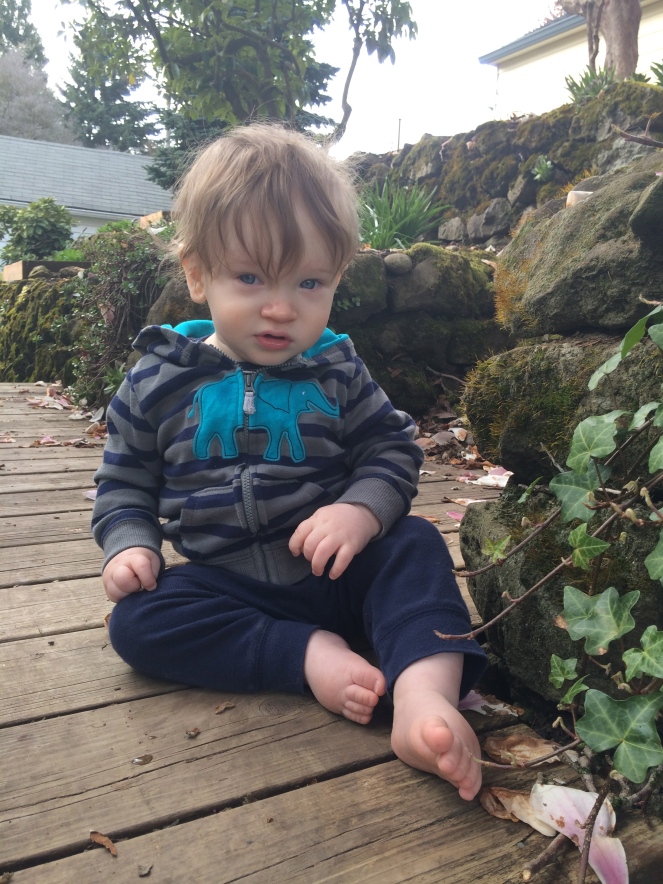 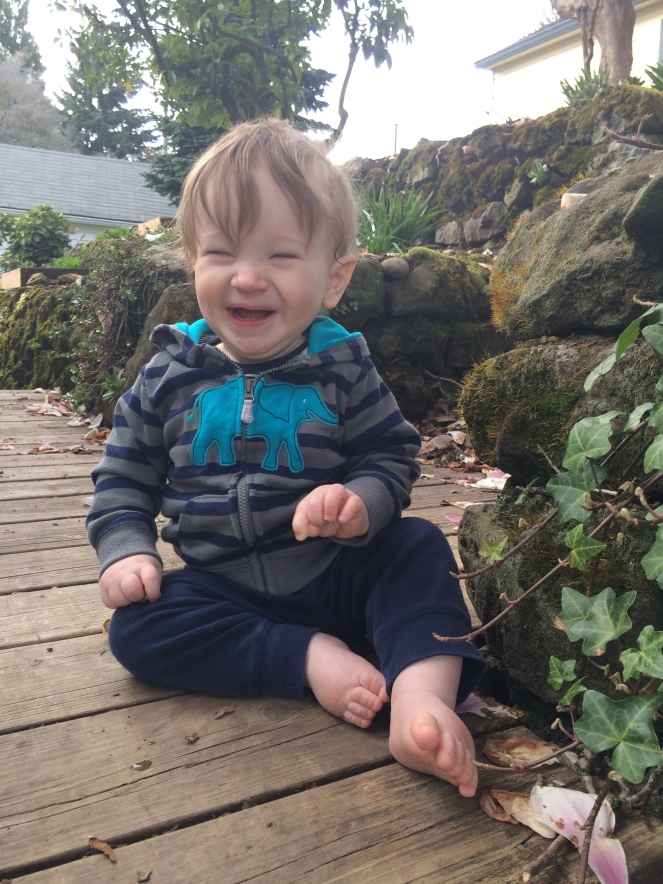 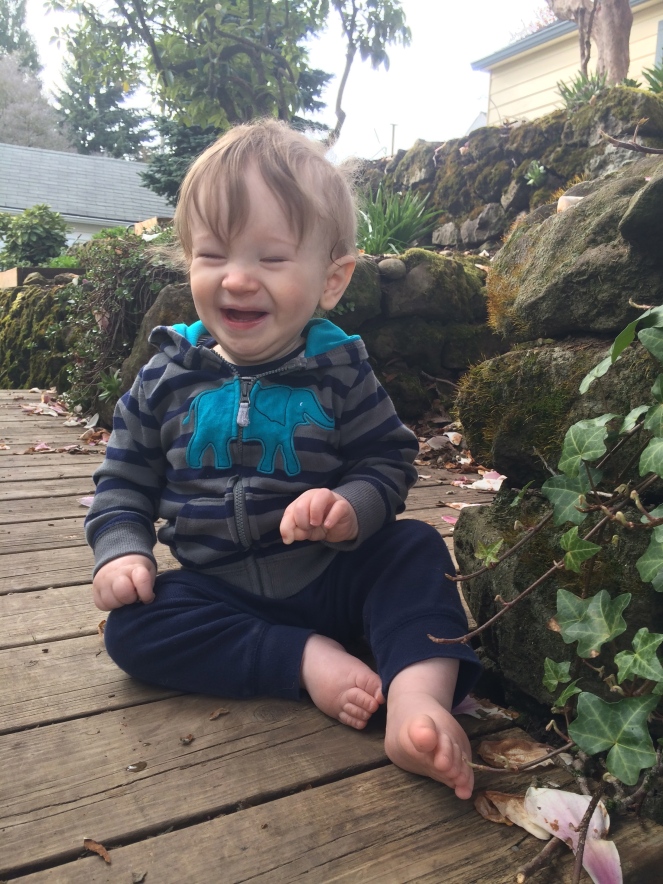 At one point, Andrew came tearing around the corner and sailed right over Ari on his way off the porch! I let go of the camera so I didn’t get a picture. But here are some more pictures in the grass: 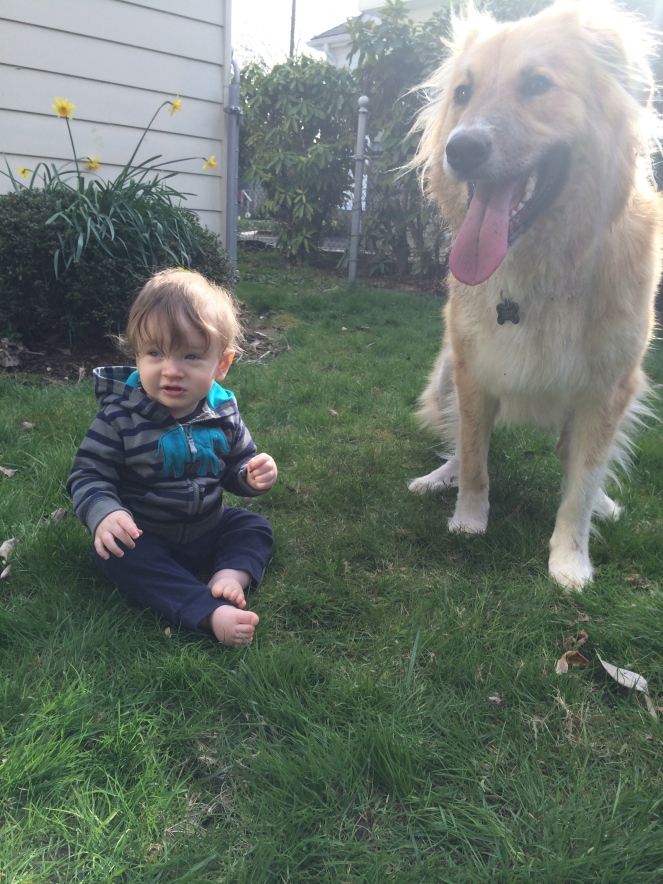 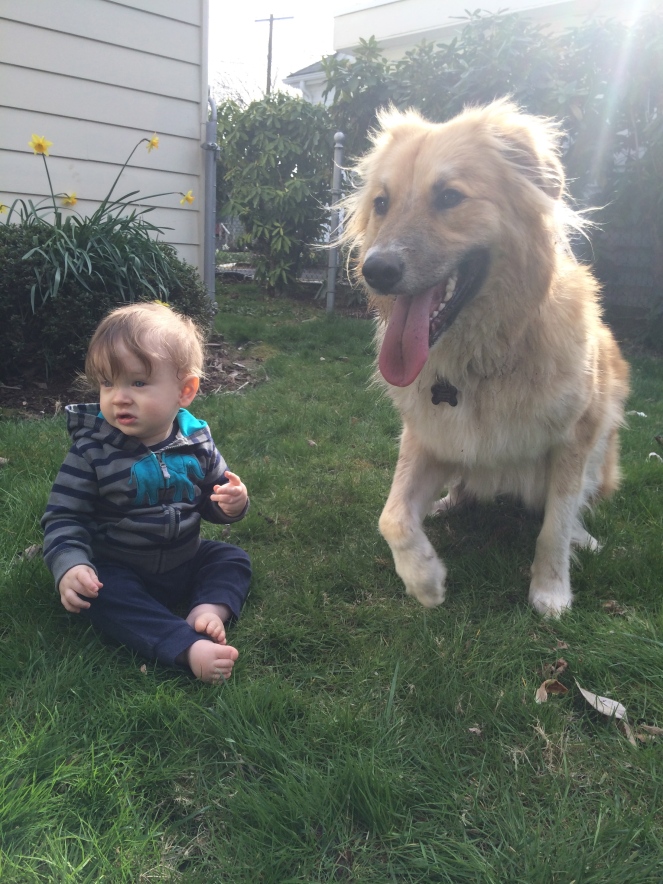 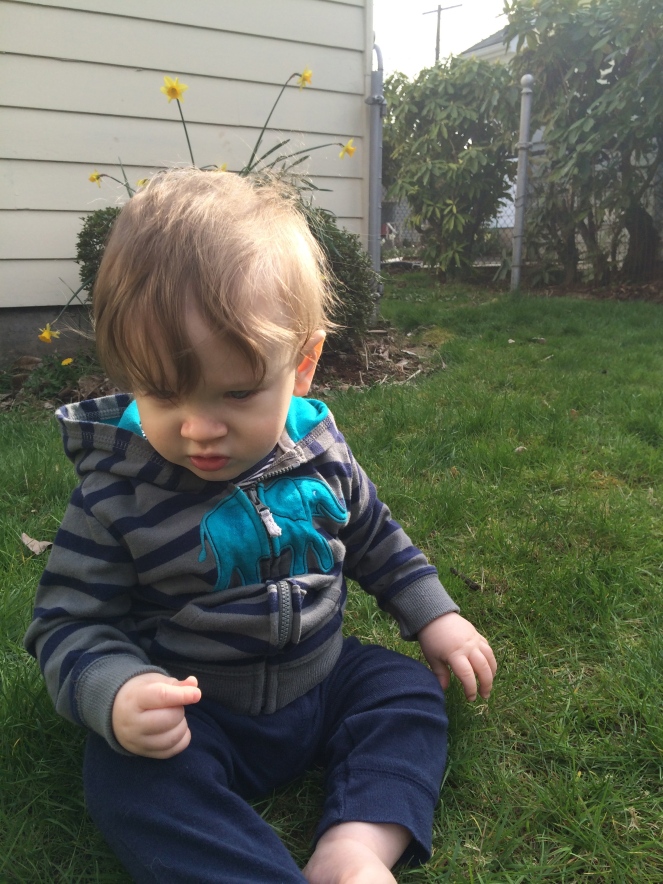 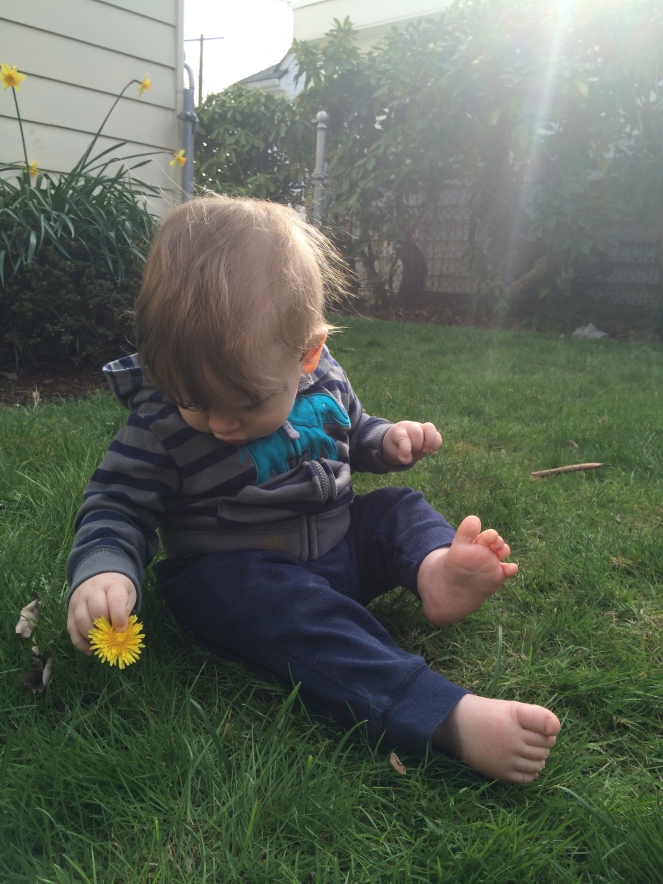 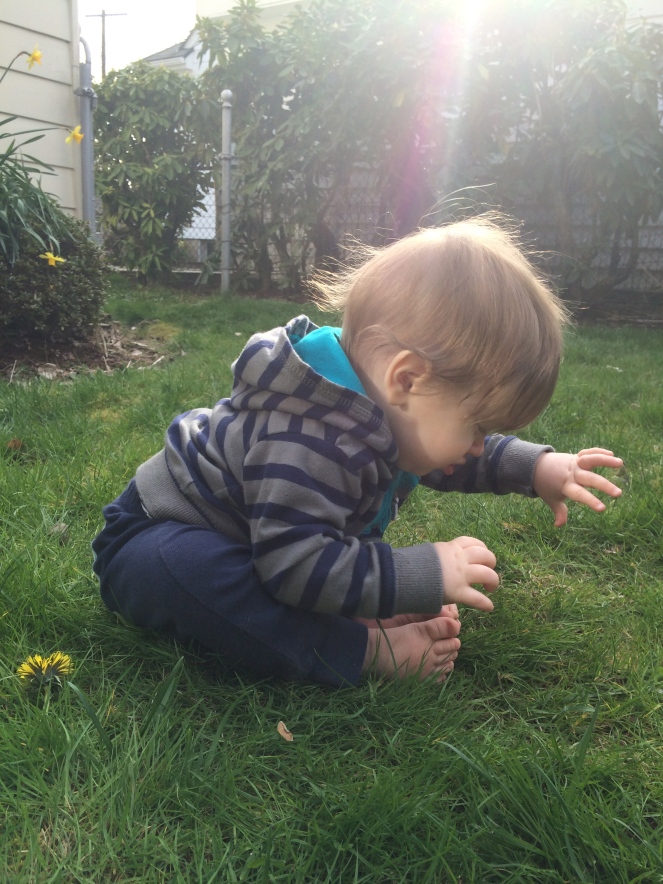 I’ve been trying to do more cooking, and one of my favorite things to make is a spaghetti sauce with tomato sauce, olives, chickpeas (lentils are good too), and seasonings chopped up right in the pot with the stick blender. I finally got to make it again because I finally cooked some chickpeas! (I haven’t bought them in cans for a while because I want to get out of the habit of using canned beans, because of the BPA in the cans.)

Ari had his own version of our dinner, most of which ended up somewhere near him rather than in him: 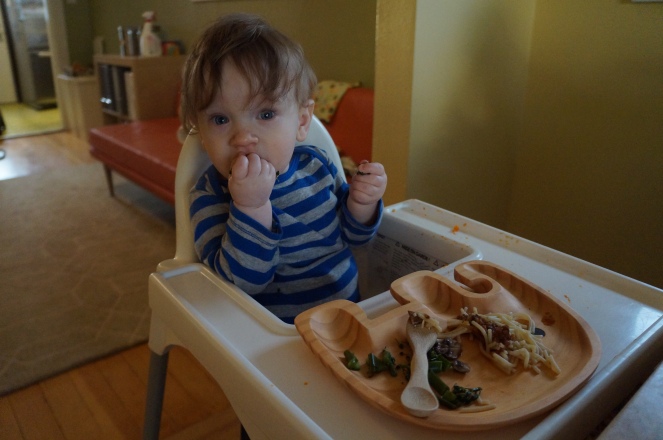 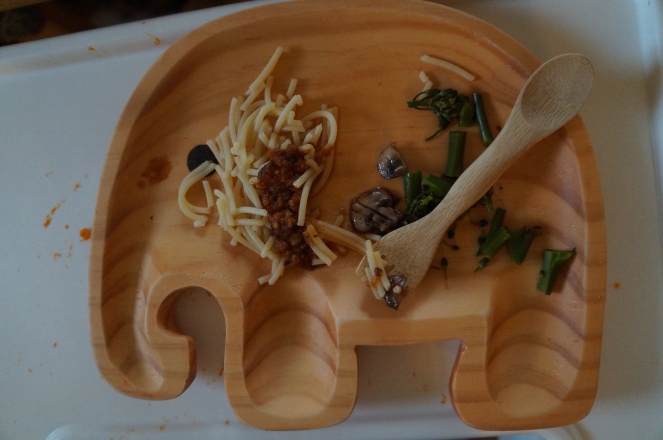 Here is the grown-up version of the dinner: 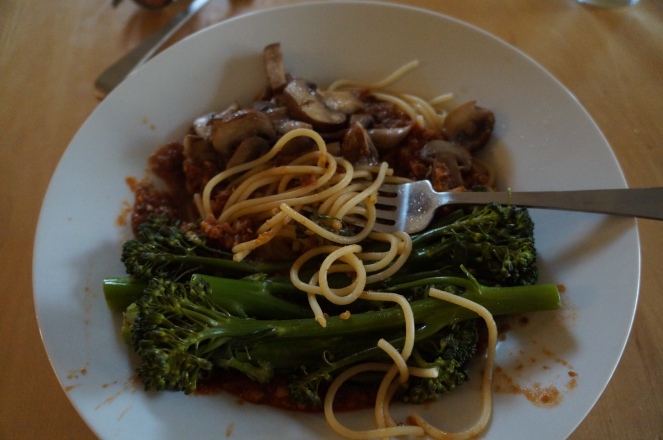 My aunt came to visit this weekend and brought some jicama (among other foods), so Ari got to try that for the first time: 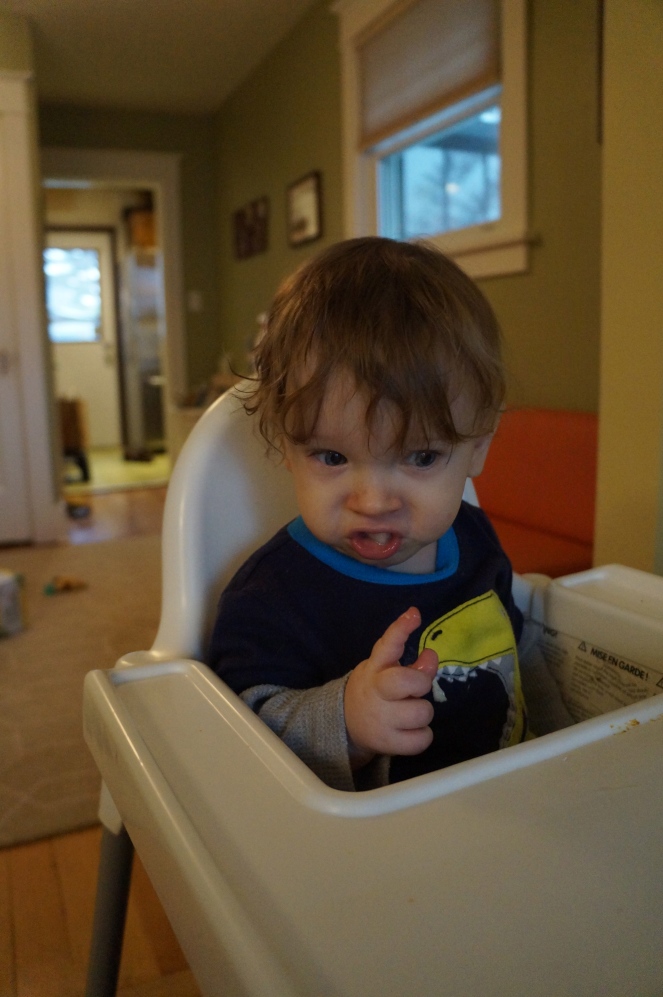 We went for a walk with my aunt, and Ari started playing peek-a-boo with his hat! A.’s mom says he did it with a blanket the other day, but it was the first time I’ve seen him instigate any kind of game, really: 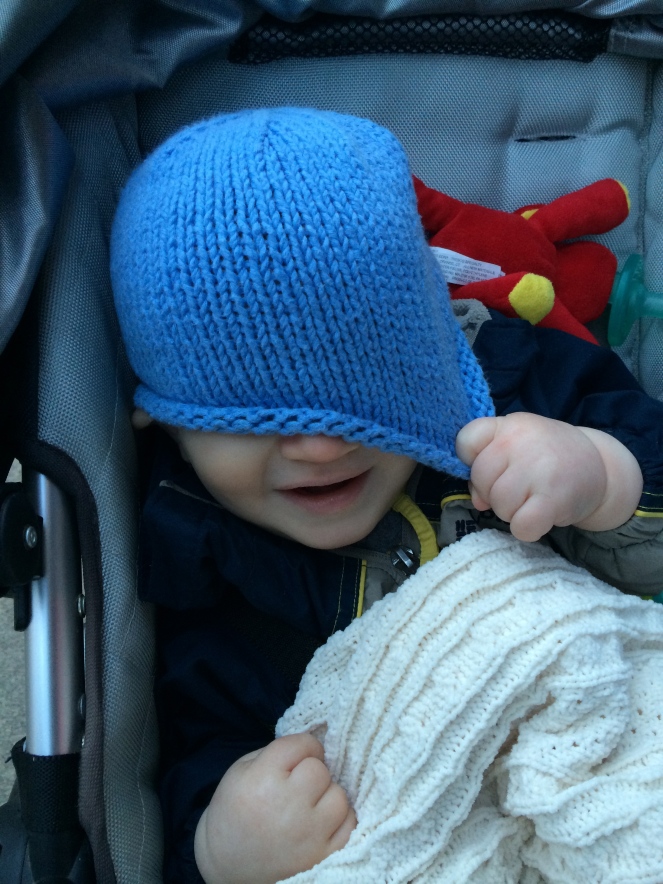 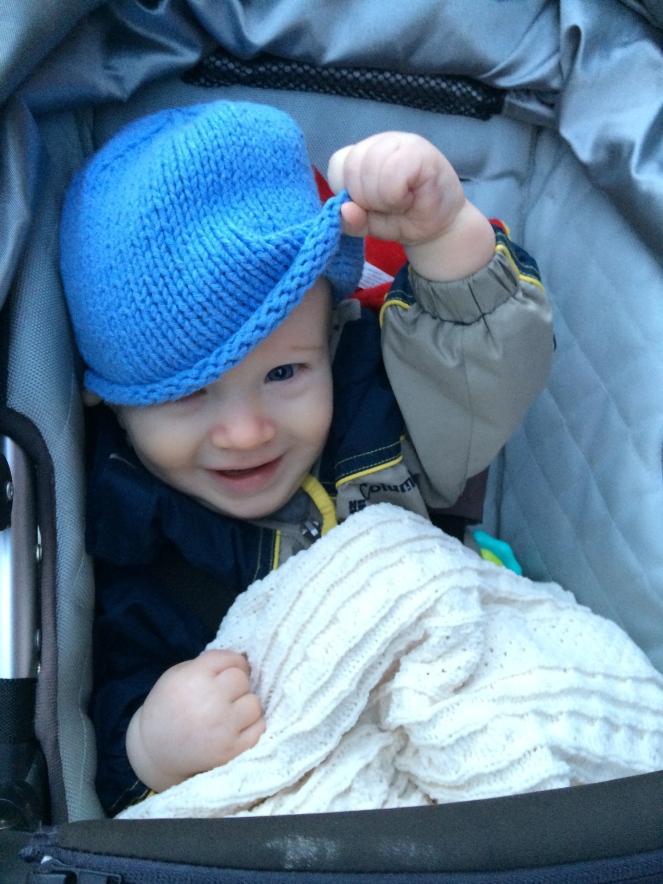 Next, first time in a swing: 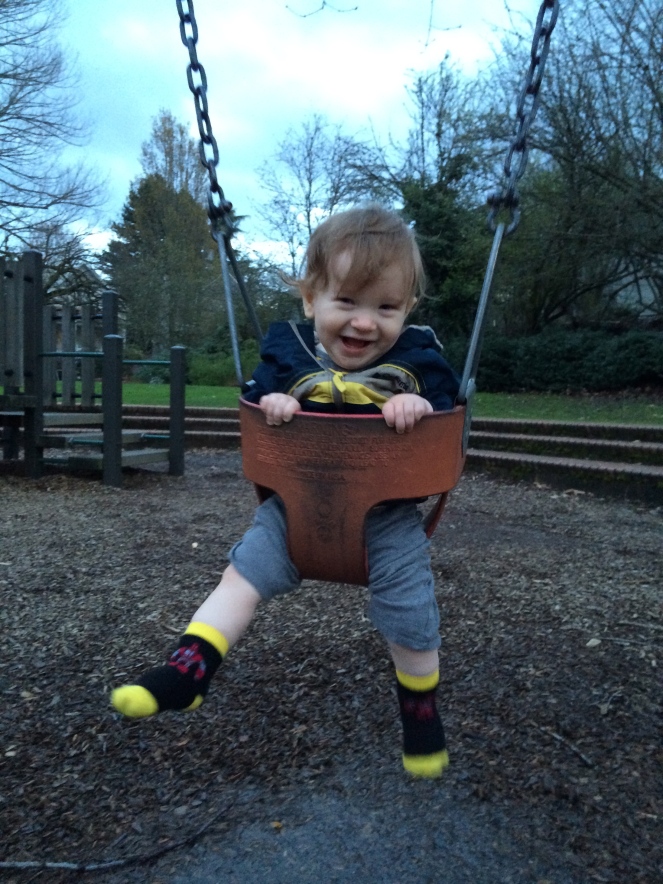 I think that was after Ari’s first group care experience. We went to see Dallas Buyers Club at one of my favorite pizza, beer, and cheap movie theaters, Academy Theater. They have babysitting for only $7.50 for the whole movie! It’s in a cute little play room upstairs. That day, one young woman was watching two rowdy 6-year-old twin boys, their 8-year-old brother, an 18-month-old girl, and Ari. Afterward, we learned that the older boys had been picked up about halfway through our movie, then it was just Ari and the little girl, and they were playing sweetly when we picked him up. Ari hadn’t seemed to mind AT ALL when I plopped him down on the floor in the noisy room, kissed him, and walked away (he was pretty absorbed in one of the toys). During the movie, I had my phone in my hand (on vibrate) but the sitter said he hadn’t fussed at all! He didn’t seem to want to leave when we picked him, either. I thought this was supposed to be the stranger anxiety age! Oh well, I’m glad he’s so flexible! He had a temp nanny from an agency a couple of days during the week, too, because our regular nanny was sick. I’m glad he feels safe with new people, at least when he’s handed over to them by an already trusted person.

We also decided to get him a new high chair, one that he can’t stand up in and climb out of. We couldn’t find any at the consignment stores so off we went to a certain big box baby store that I find depressingly materialistic –  but I guess we’re sucked in, too.

I did pick up some SHOES at the consignment store! 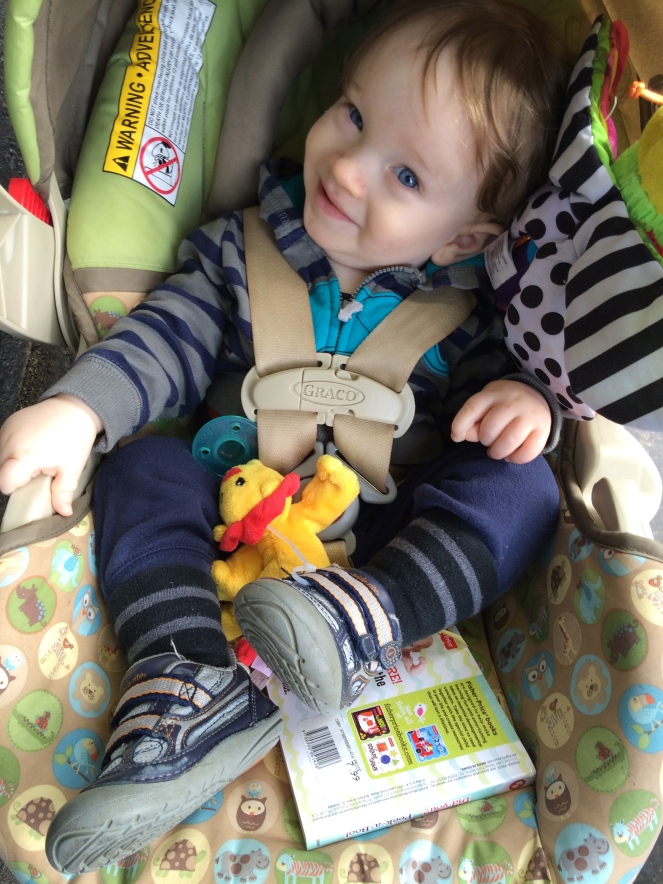 Ari seemed pretty excited about the chair and the shoes. 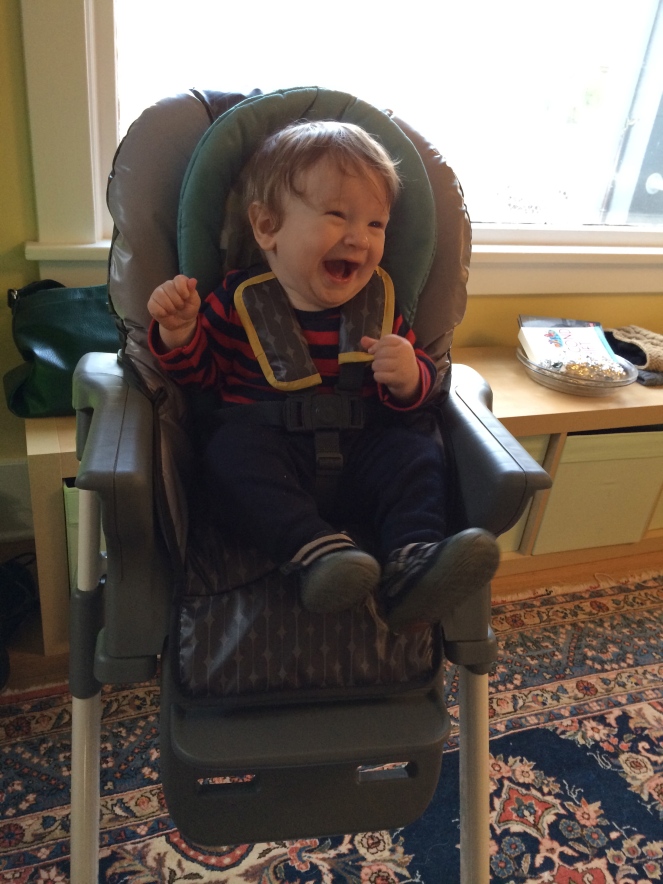 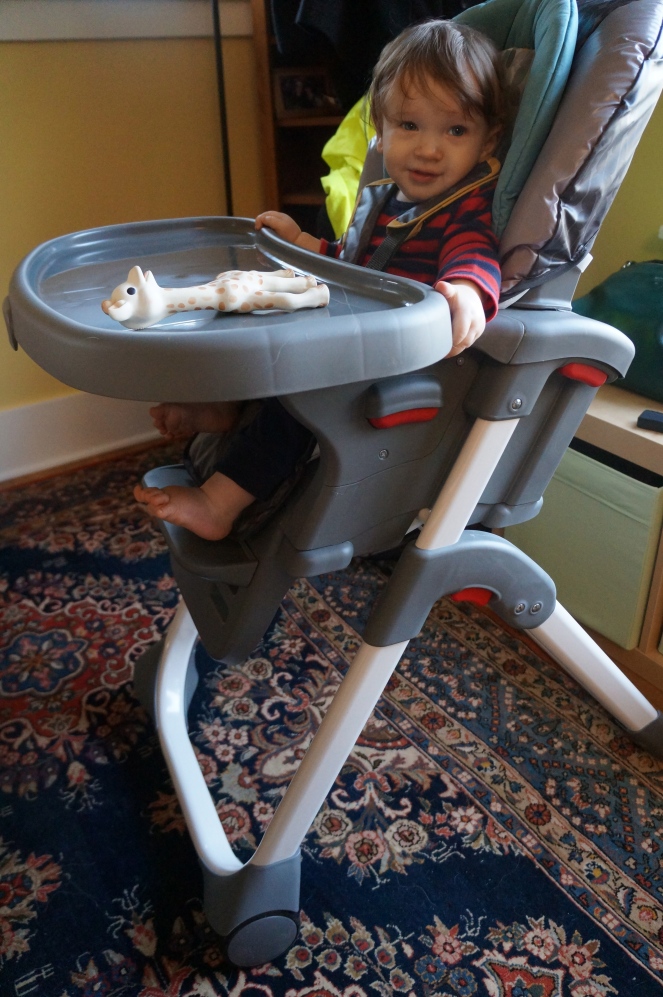 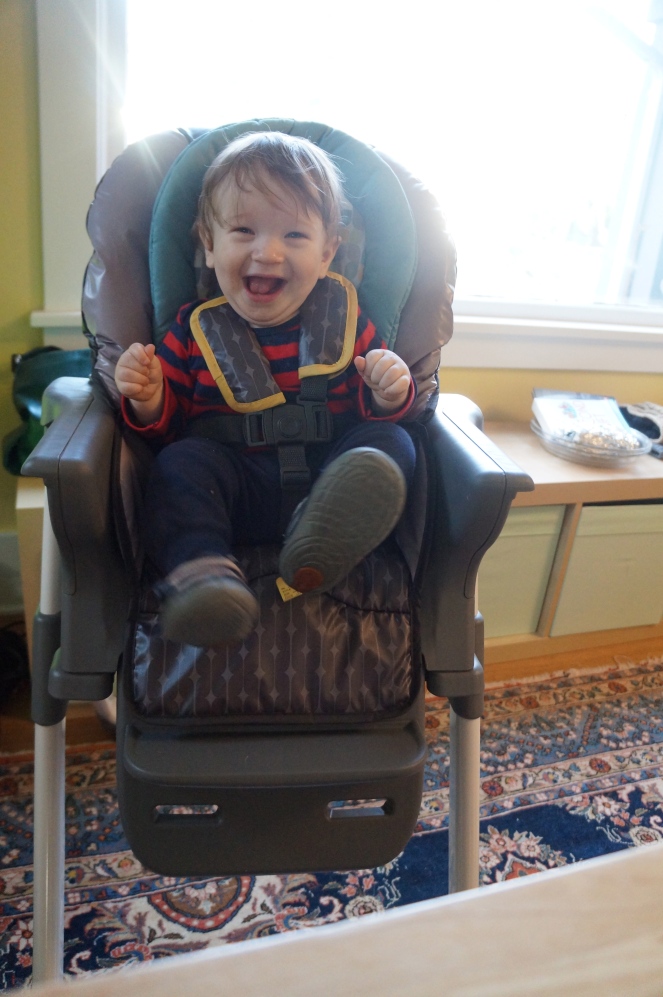 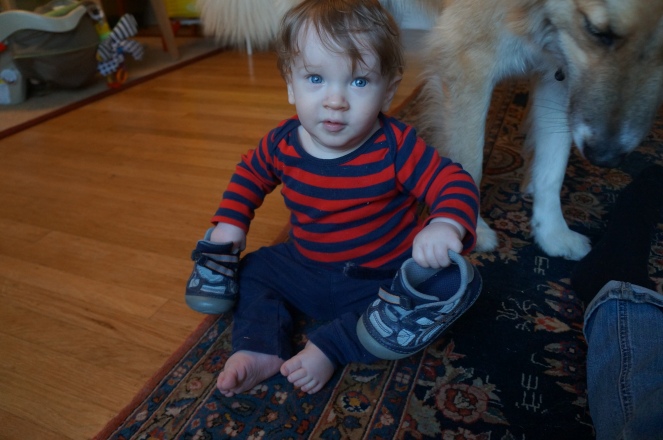 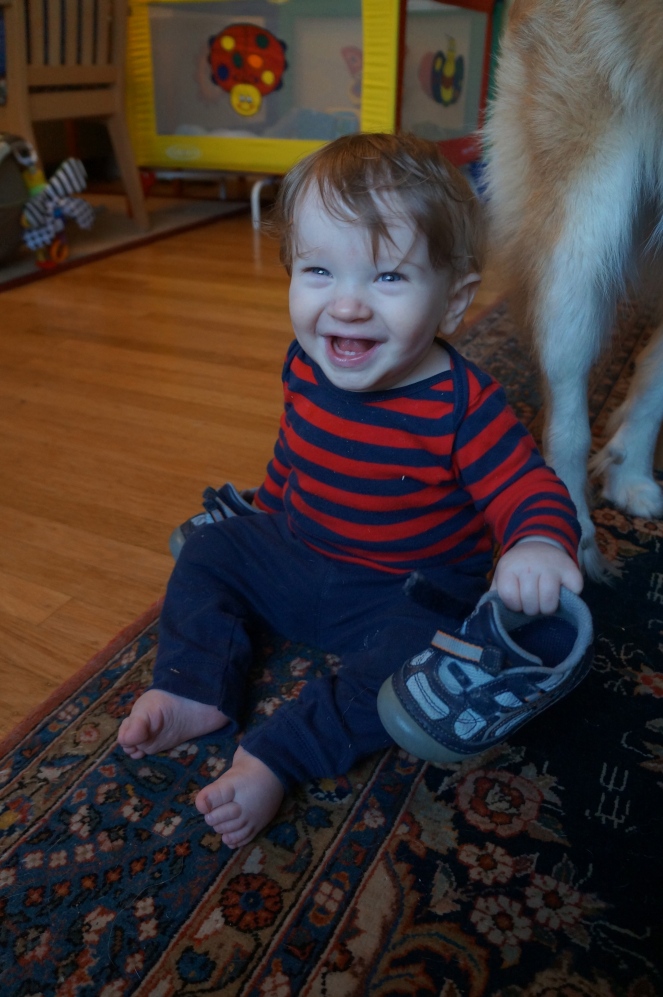 We also did some bike riding today! No pictures of that, but here are some pictures of Ari in the bike trailer that Jan took a while ago: 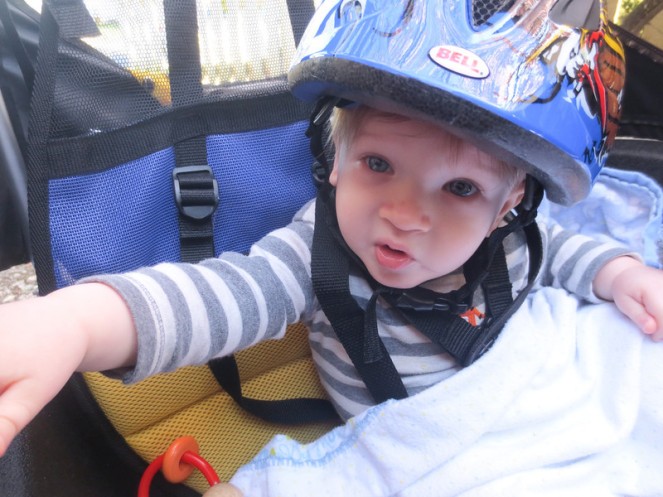 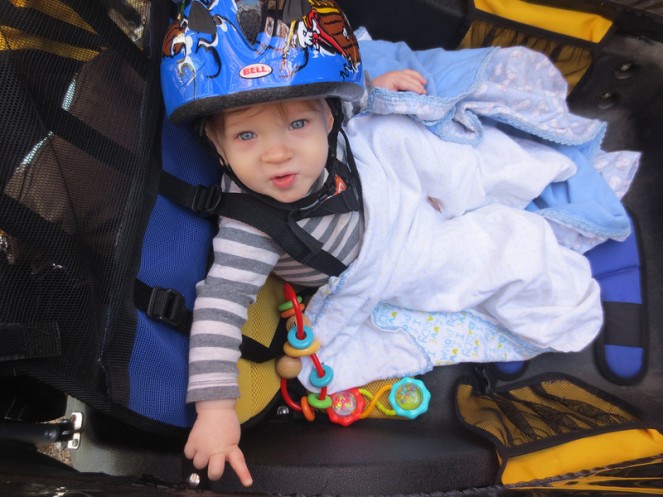