It’s time for me to post something besides baby pictures! I have so many things I want to write about but I can barely keep up with the basic Ari updates. When I have time to be on the computer, I feel like I should go through email or catalog and share photos before I do any writing – basically I want everything on my to-do list tied up in a bow before I do what I really want, but maybe that’s not realistic! Especially for a mom.

Ari’s been taking some good naps recently (more on that later) so I have some time right now!

Home organization is one of those things I always want done before I do anything fun. I hate feeling out of control! Of course everything about having kids, starting with getting pregnant, continuing with how your pregnancy goes, knocking you over the head in childbirth, and then just rubbing it in after that, is a lesson in letting go of control, right? I was reading something to that effect last night and thinking about how angry I got during labor that I couldn’t stop or control the contractions. Pregnant ladies – practice letting go!

Anyway, it’s been like a mantra in my head for decades now – “I have GOT to get organized!” Every time I’m invited to do something, my first thought is, “I really should stay home and get organized.” Then if I go out anyway, I’ll feel guilty, but if I stay home, I’ll usually waste time procrastinating and feel guilty anyway. It’s a lot of fun for A., as you can imagine.

I could have an entire blog of my efforts to get organized. I would enjoy reading that blog! Of course there are a lot of resources on the web already. Everyone basically says the same things, and they’re true: the key thing for me is breaking the big overwhelming “home organization” task into many small tasks. I’m a perfectionist and am not good at doing that, but fortunately for me, A. is pretty good at it. He and I both have the same basic goals: we want a minimal number of things in the house, and we want each of those things to have a home. It’s very frustrating for both of us when he wants to tidy up the house but we can’t put things away because neither one of us knows where they go. I like to be in control and know where everything is, so I get a little – or a lot – panicky (which often turns into angry) when someone else starts putting things “away” before I’ve actually decided where they should go. But I can’t decide where one thing goes if I don’t know where EVERYTHING goes. It’s very all or nothing with me.

But A. sets out like this: he says, “today I want to get all of our food into sealed and labeled containers, throw away old stuff, and store duplicates.” So he starts out with making a list of what containers we need based on the food items we have, then we go buy containers, then I decide that’s enough for one day but he insists on actually putting the food into containers and labeling them. Ta-da! Then it’s much easier for me to face the rest of it, so when my aunt was here this past weekend we rearranged the small appliances, cleaned the surfaces, and took all the various utensils and small items out, sorted them, and decided where they “live.” Now I’m happy!

Here’s how it looks (I’m not going to post “before” pictures because I might want to be hired for a job again someday!):

Note that this has happened in stages. A.’s mom bought us this thing to hold our mop and broom and A. installed it a while ago. 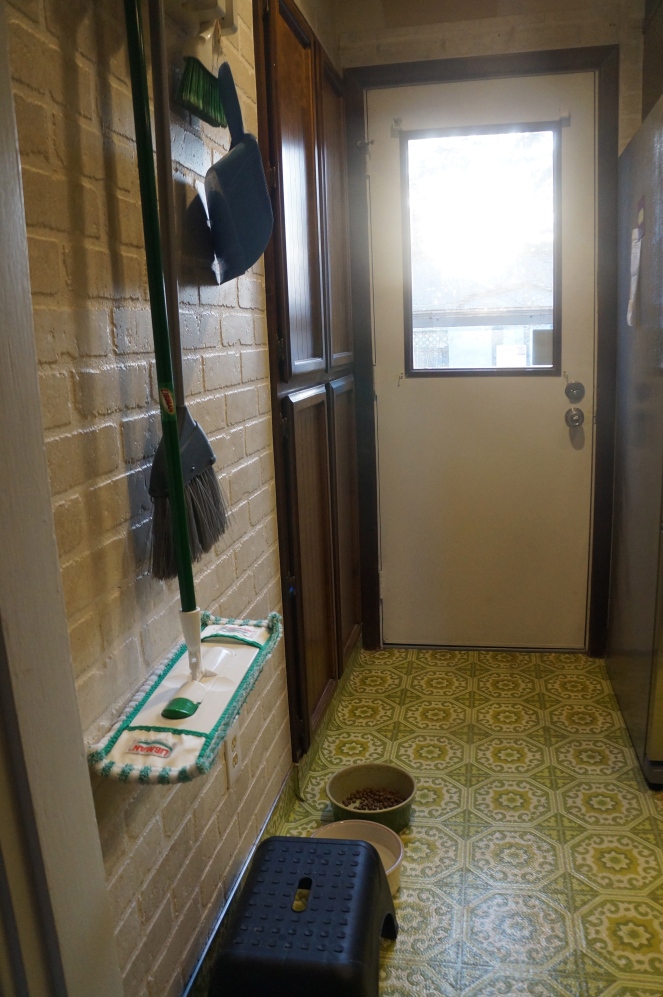 We’ve had a really difficult time deciding where to put our giant microwave. So far I’m liking this arrangement, though! 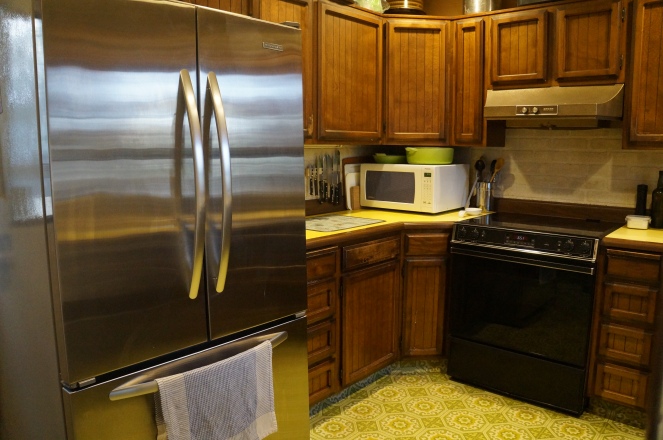 My aunt pointed out that if I put the Le Creuset lid in upside down, the big dutch oven would fit on top of the microwave. Then I noticed I could keep the cutting boards out of the way by sliding them in next to the microwave. Woo-hoo! 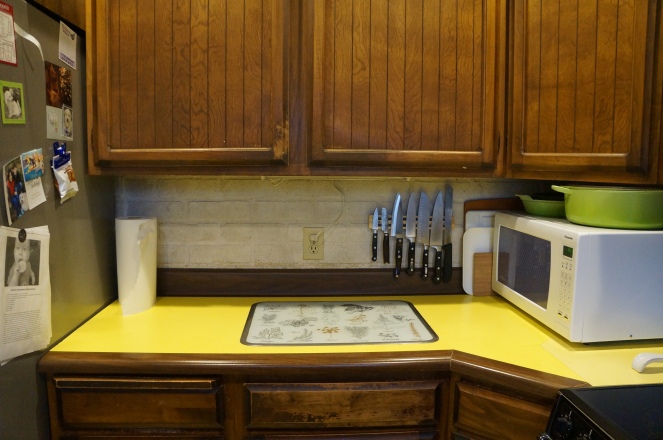 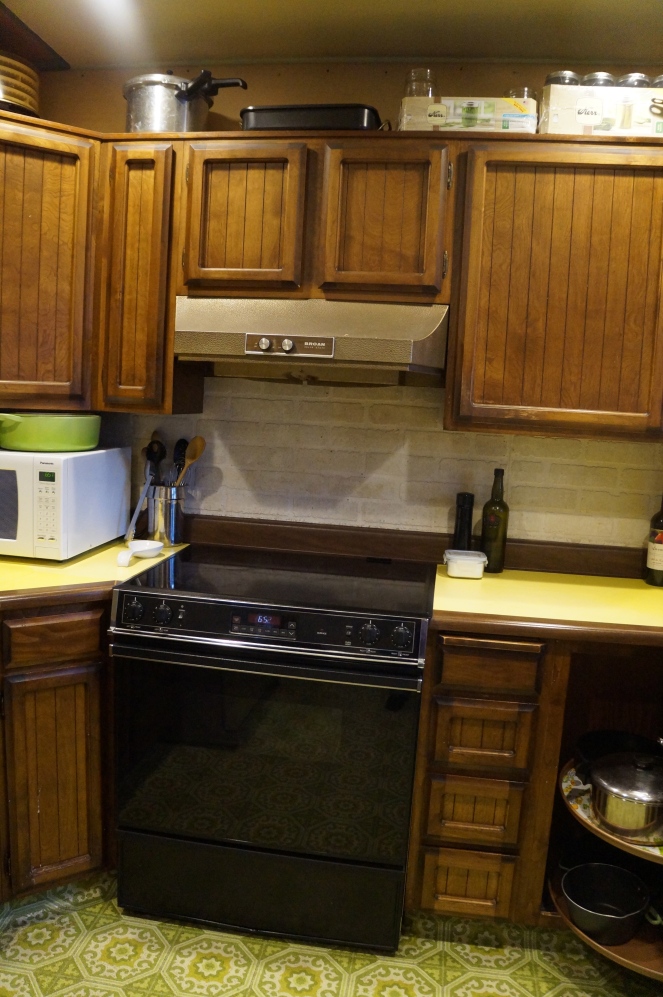 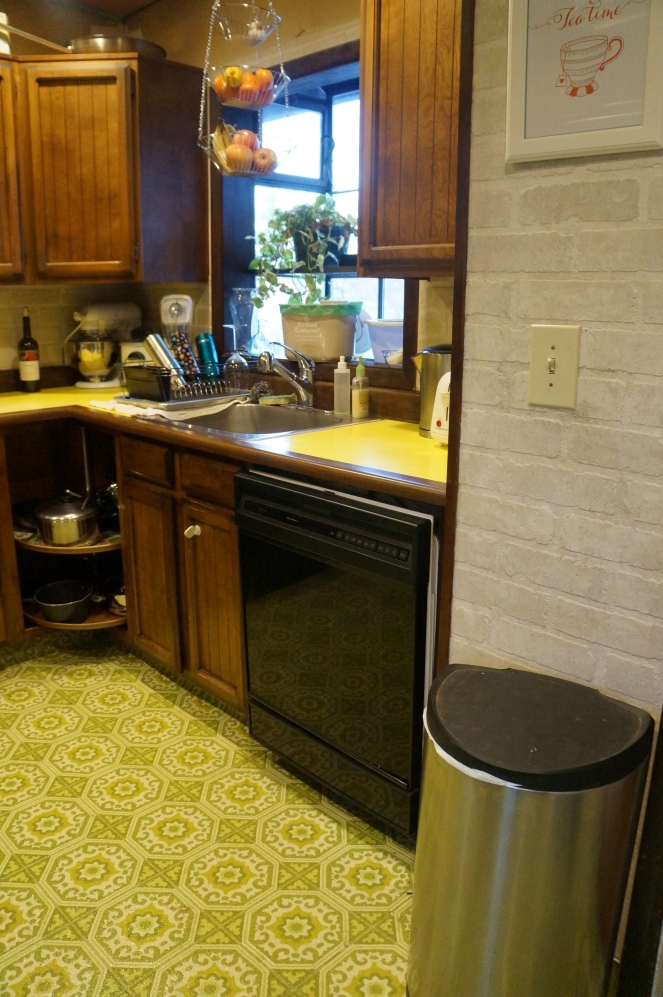 Inside the upper lazy susan cabinet to the left of the stove – all my oatmeal fixings are on the bottom and snacky stuff is above: 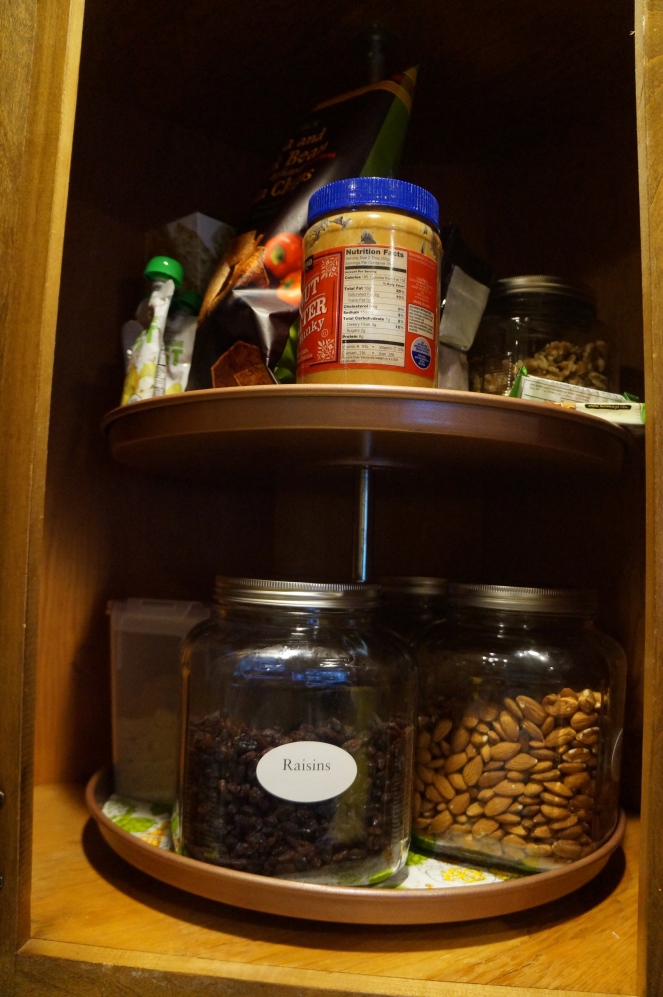 Ari’s little cabinet – we’ve only used the formula a few times, like when I stayed overnight at work in the snowstorm: 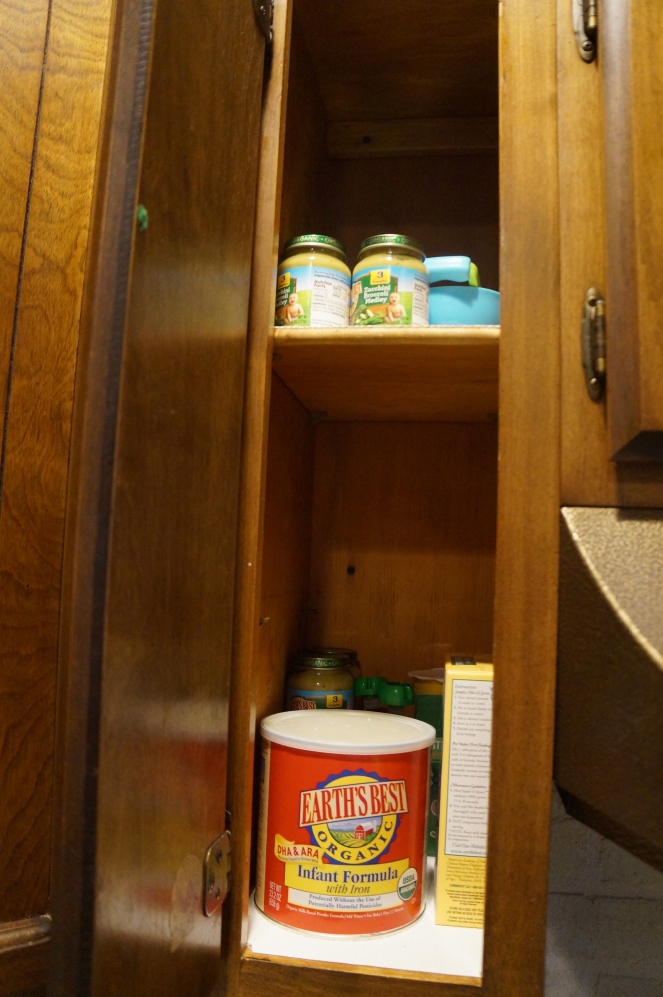 To the right of the stove: 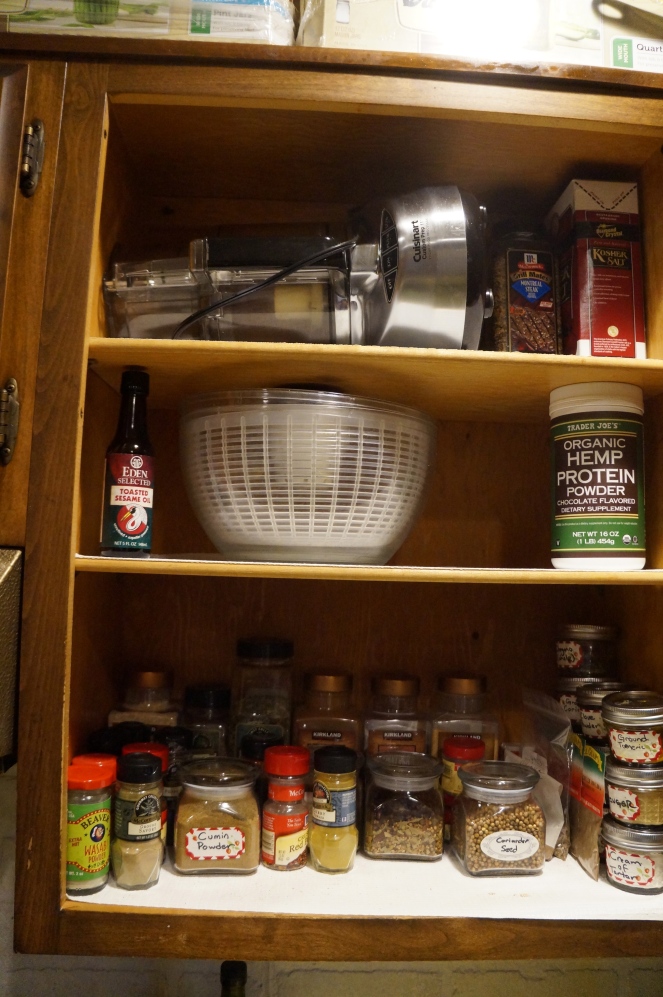 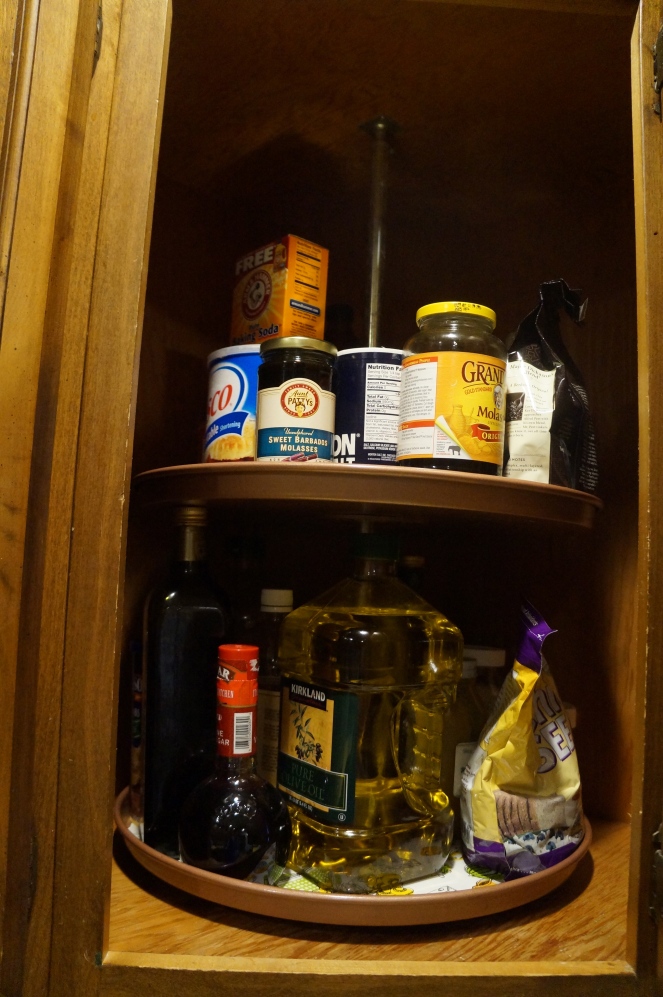 The lower lazy susan to the left of the stove: 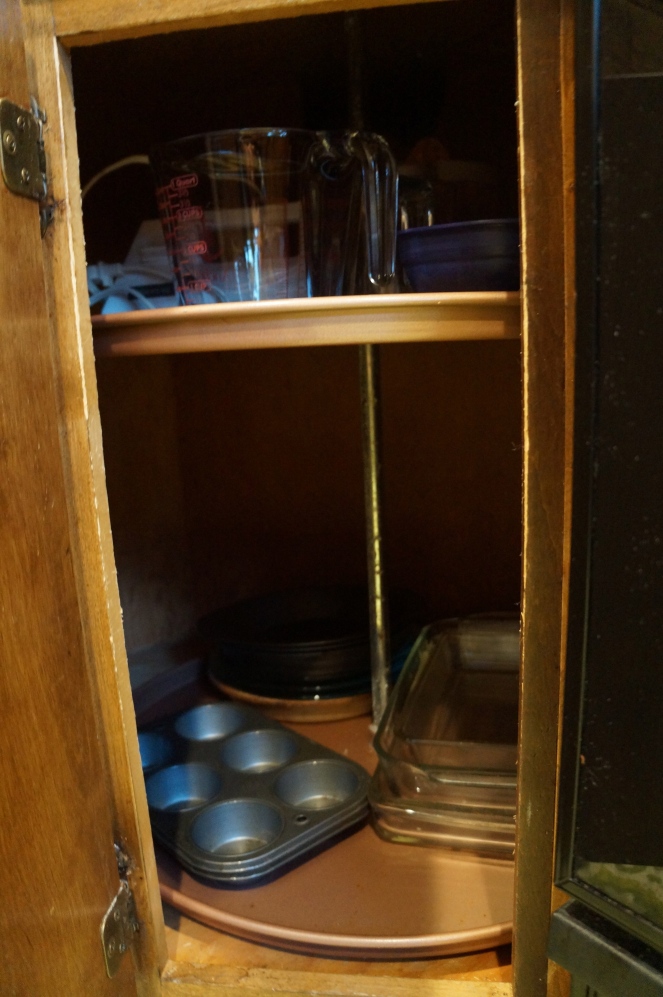 Putting all those baking dishes in there meant we could easily fit the baking sheets and cooling racks in the drawer under the stove: 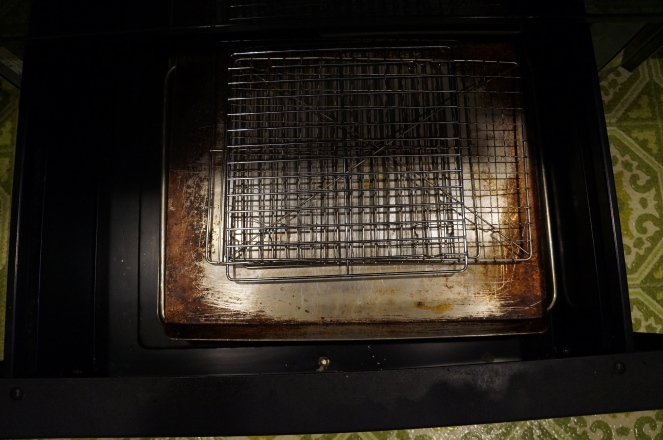 The other lower lazy susan: 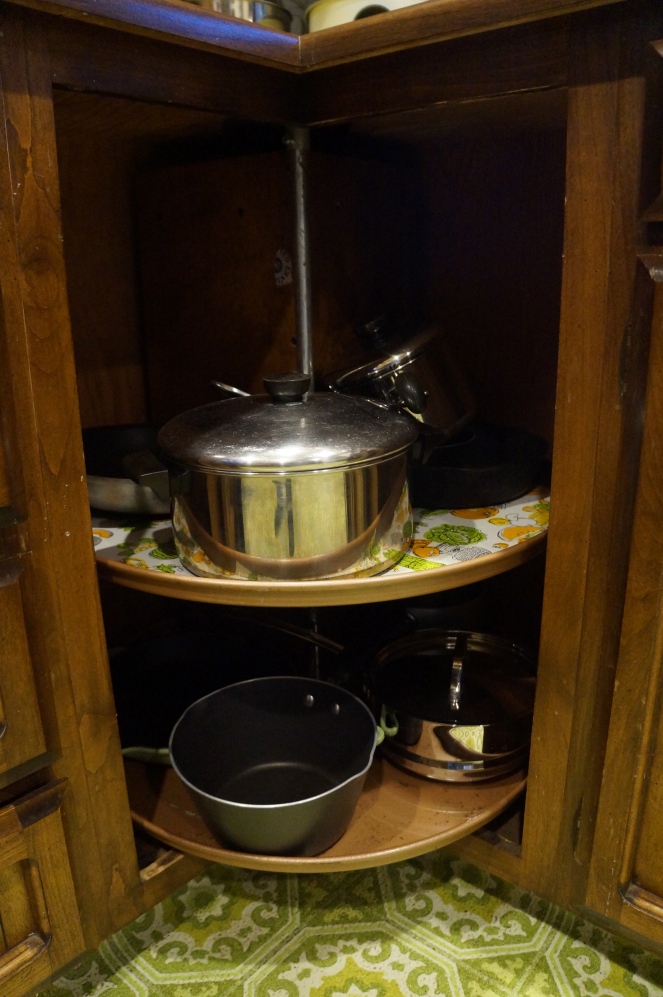 Under the counter, between the fridge and the stove: 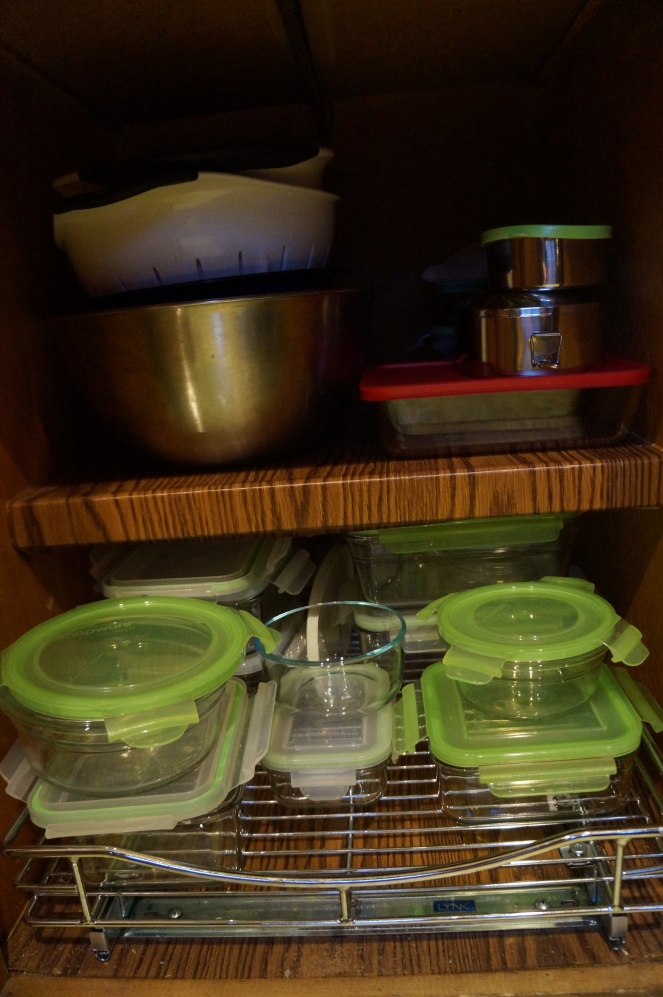 The drawers next to the fridge – the bottom drawer has some random stuff that doesn’t seem too dangerous if Ari gets into it: 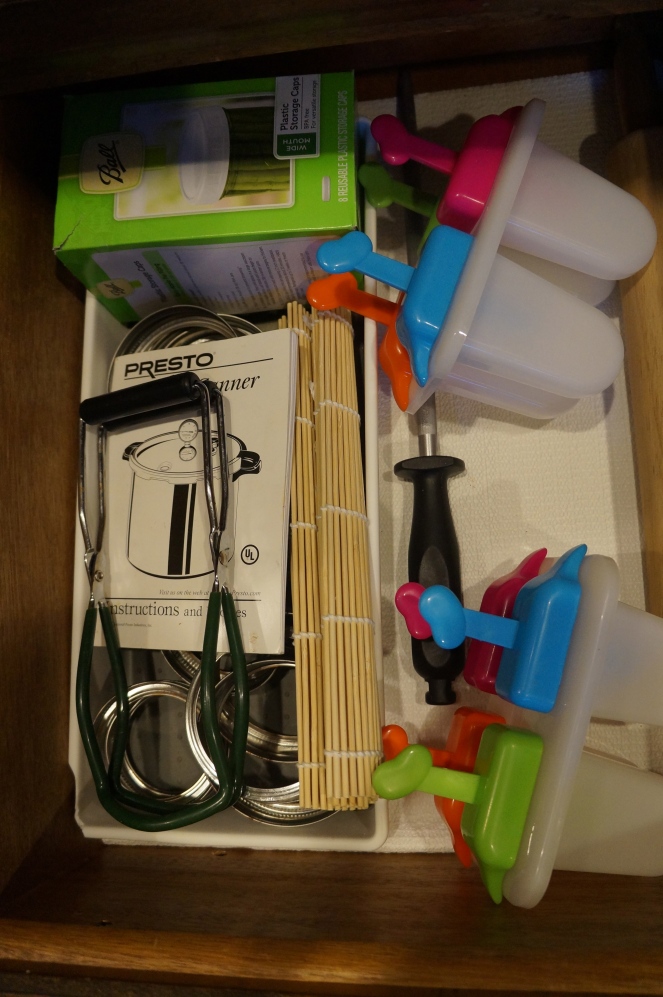 The next drawer up has some measuring and mixing tools. We could probably arrange this better with dividers but I don’t think we’re going to maintain a system that fine-tuned: 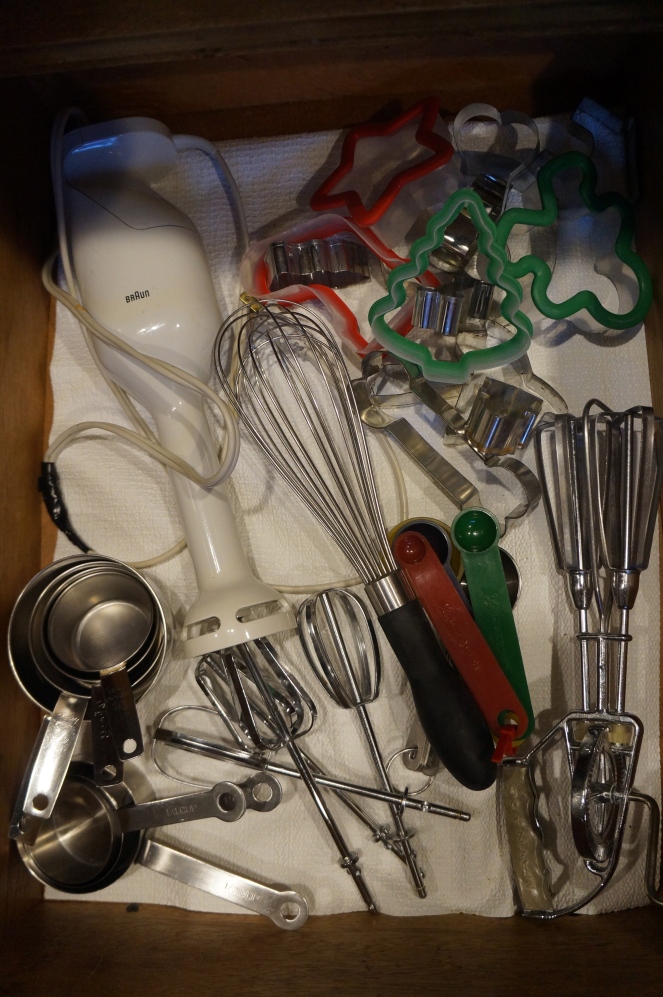 Some other cooking and baking tools – basically the same category of things we have in the cylinder next to the stovetop. I think I’m going to go move that ice cream scoop to the bottom drawer! 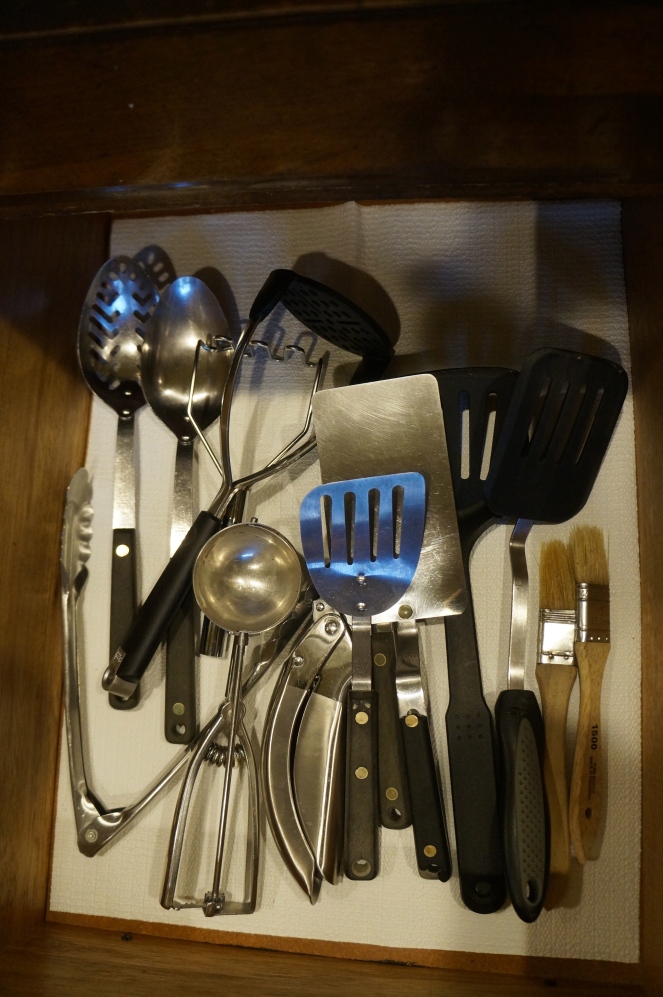 The top drawer has sharp things: 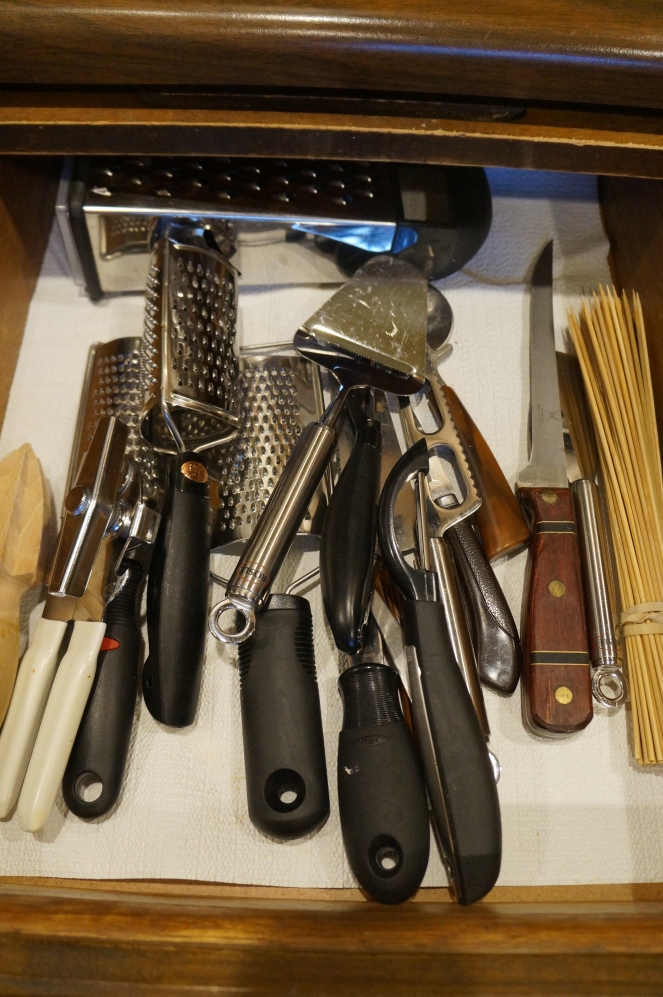 I forgot to photograph the drawers to the right of the stove. The top one is our “junk” drawer – basically it’s just scissors, rubber bands, and bottle openers. The next one down has pot holders and hot pads, and the bottom two have towels.

This cabinet to the right of the sink was organized earlier, mostly by A. and his mom. A.’s first little project in the kitchen was dealing with my tea. I LOVE tea and had a bajillion random boxes of it piled in this cabinet. I like having a variety of options, but I pretty much only drink black tea, so a lot of it was REALLY old. Then my mom emailed around something about pesticides in tea (and toxic stuff in tea bags, even!) and I decided to start using organic loose tea. (Note: Celestial Seasonings has been the main target of accusations about pesticides, and they are now arguing that they had their tea independently tested and no pesticide residues were found – I found this article summarizing some of the arguments.) 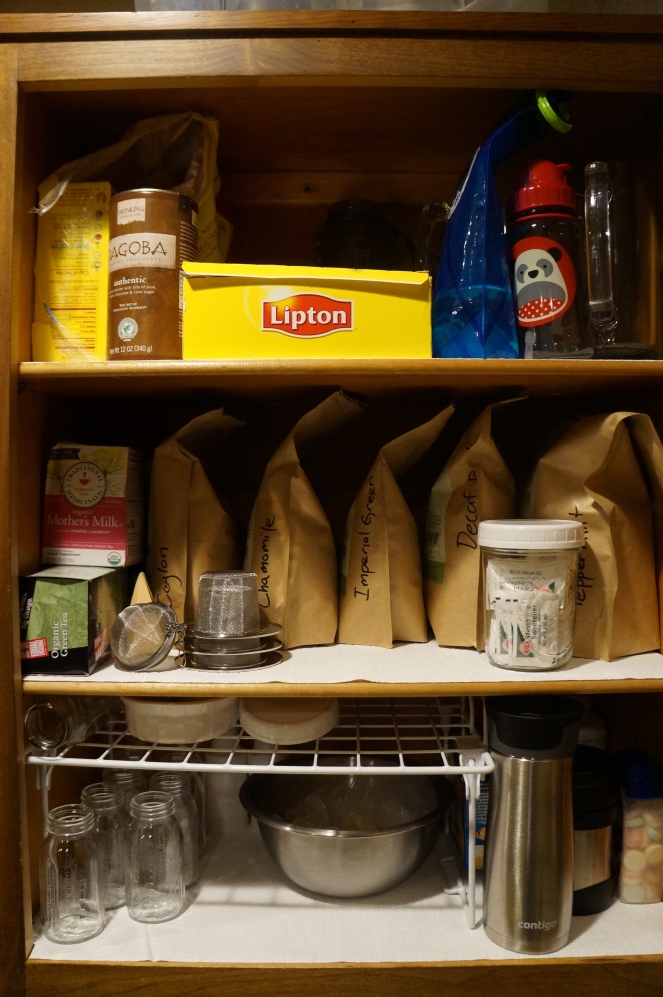 I have a lot of Lipton tea because I got it at Costco, even though I hate to use it because I don’t like supporting the big Unilever conglomerate and it was on a list of brands to avoid if you’re boycotting Monsanto. Also it’s not organic. But I’ll use it up.

Of course as soon as we did all this, I went to Costco and saw that they had replaced the Lipton with organic black tea! I totally would have settled for that. 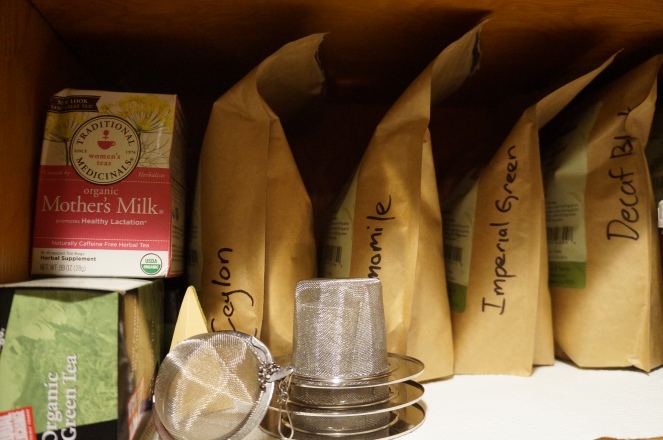 Here are pumping and bottle feeding supplies – I’ve switched to glass bottles, more on that later: 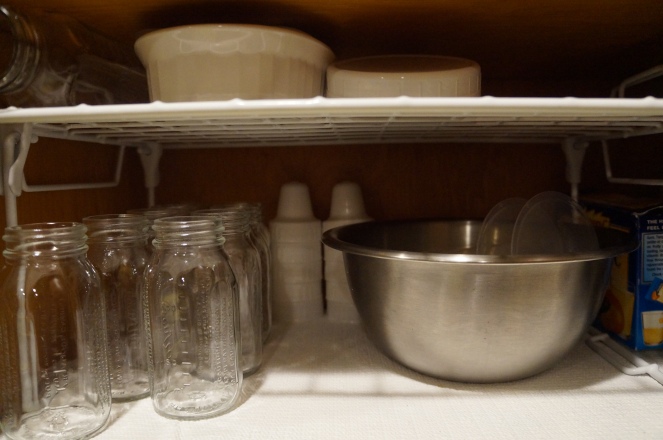 Over in the cabinets next to the mop and broom, this is what the lower left one looks like – we got the bins from Ikea for onions and potatoes (I think it’s this one – they have a couple of sizes): 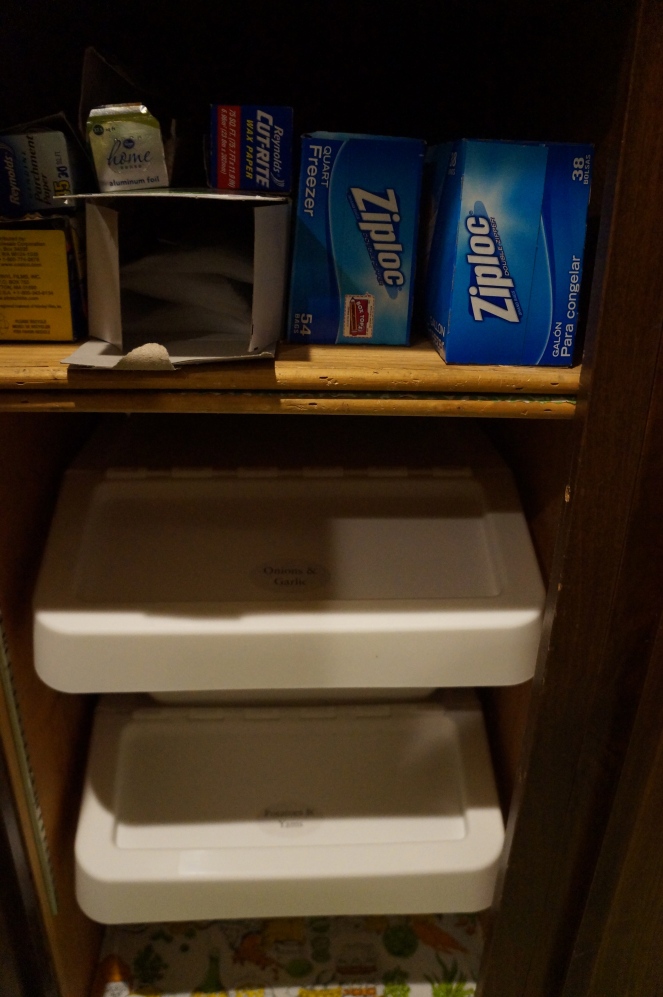 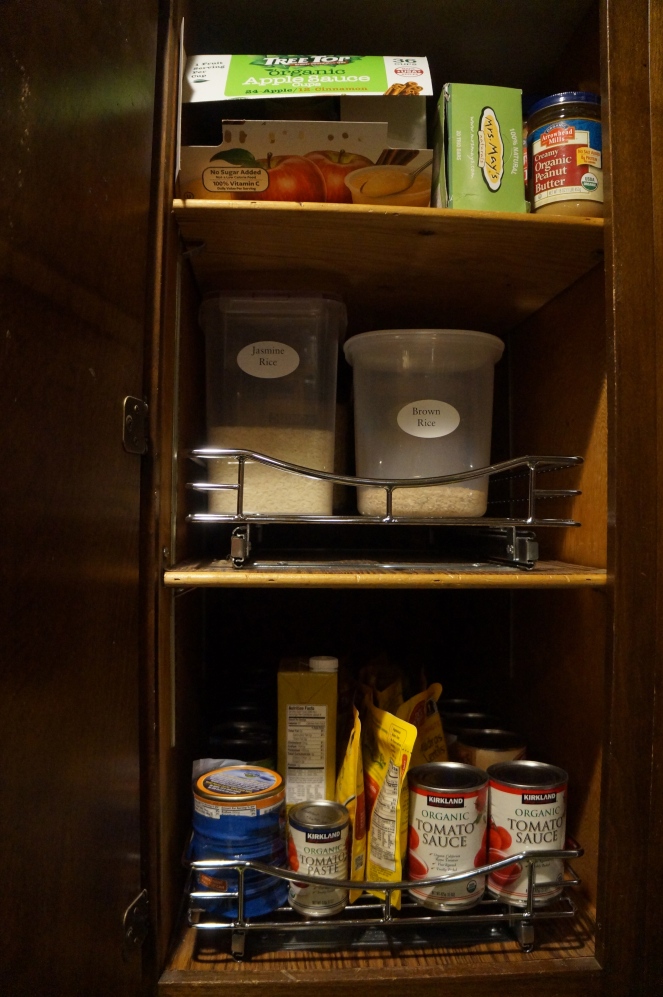 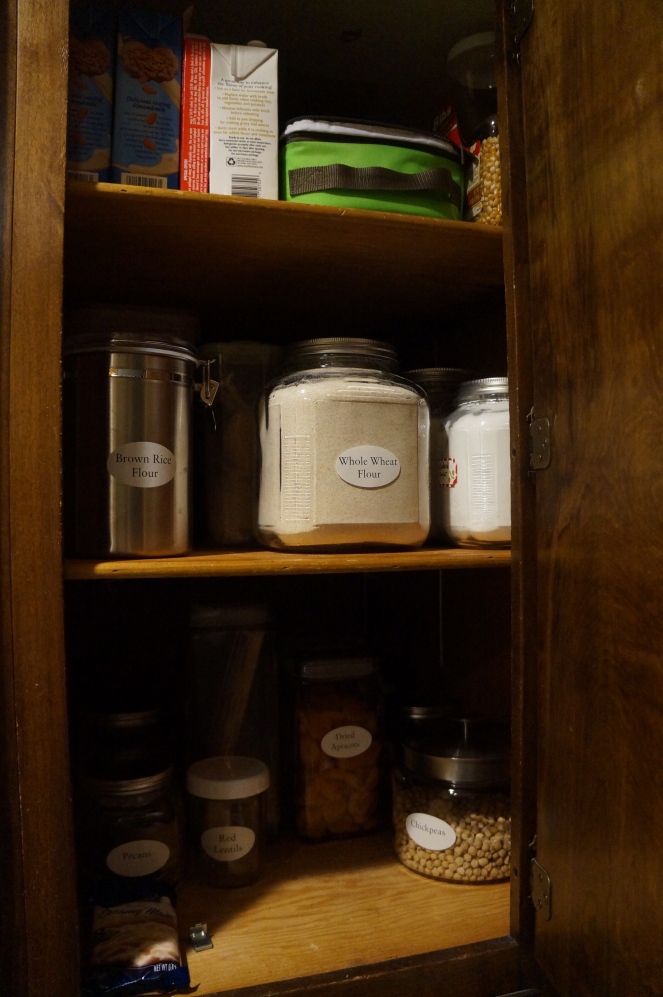 The lower right, with dog food, extra dog treats (we have some out in other containers for easier access), and trash and compost bags: 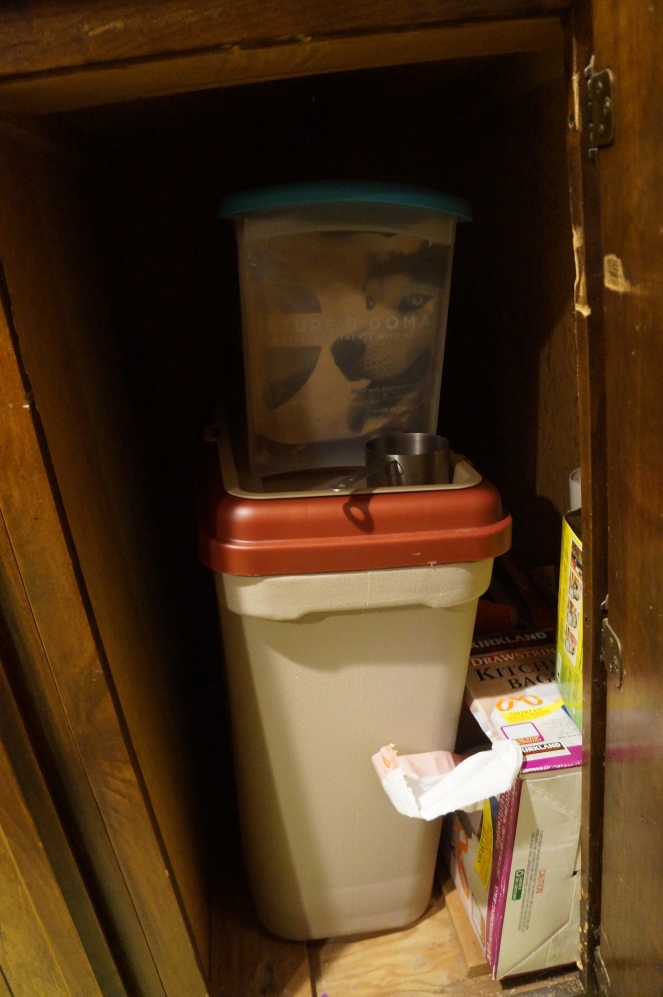 Ooh, this seems like a good place to show some of the work I did recently when I had a good day with Ari letting me get some stuff done in the kitchen. I love cooking with chickpeas and other beans (especially ground up in tomato sauce, as I’ve written before) but don’t want to use canned beans all the time because of the BPA, but I’ve been intimidated by the process of cooking the dried ones. I found this great post with very clear directions and have had it open in my internet browser tabs for ages. (There is also this for dried beans in general.) So one day I finally just put some beans in a pot to soak, then the next day I remembered them and just moved on with the next steps. I didn’t tackle freezing them, just used a bunch, put the rest in the fridge, and used those up within the week.

I managed to figure out how to throw some sweet potatoes and carrots in the oven to roast, then I mashed them up with chickpeas for some baby food (I ate some too). Also the cooked chickpeas made good finger food for Ari – I just smashed them a little because they seemed like choking hazards.

Here are some of the little portions of baby food from that day: 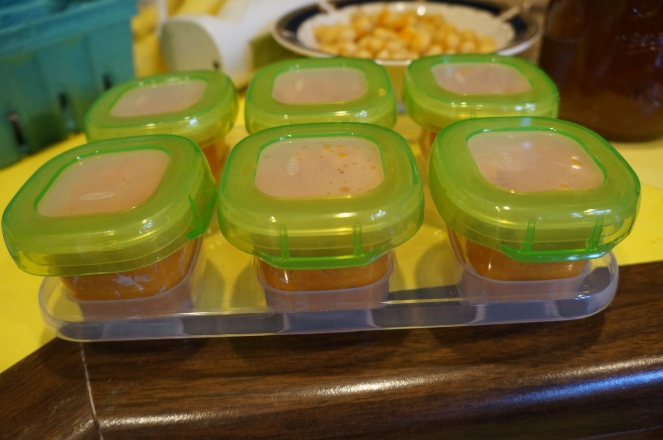 Here are some other little containers in the freezer with the frozen breastmilk: 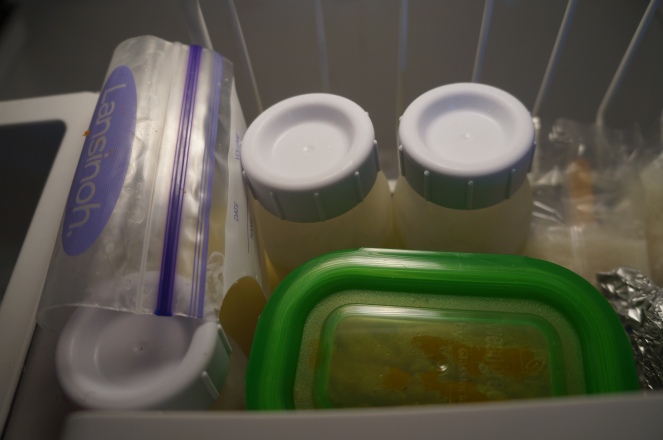 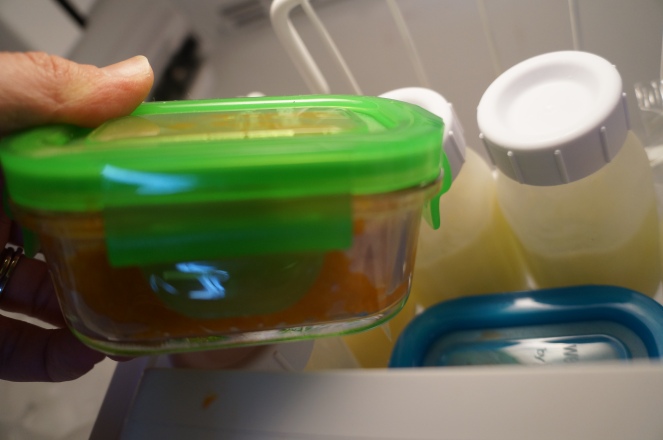 Then I decided I was pretty proud of the rest of the freezer, too, so I wanted to photograph it. 🙂 I love when other people show their systems on their blogs so I can copy them! I love the black bean burgers from Costco – I just eat them on a plate with Yumm! sauce from Café Yumm, or mixed up in chili – but they’re not perfect because they’re not vegan and they’re made by Morningstar, which is also on the lists of companies to avoid if you’re boycotting Monsanto. 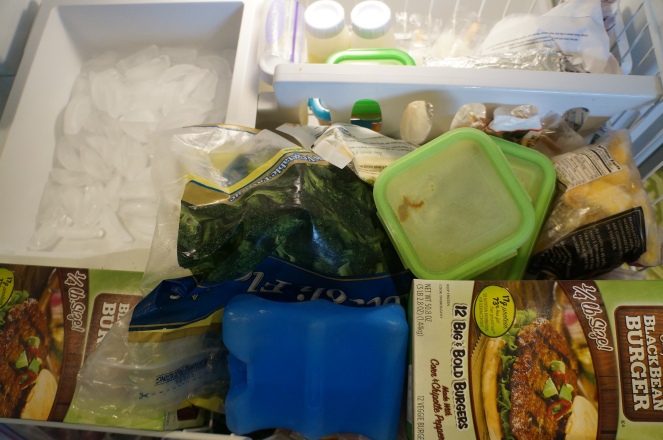 I plan to use the mangoes for smoothies and green drinks one of these days. 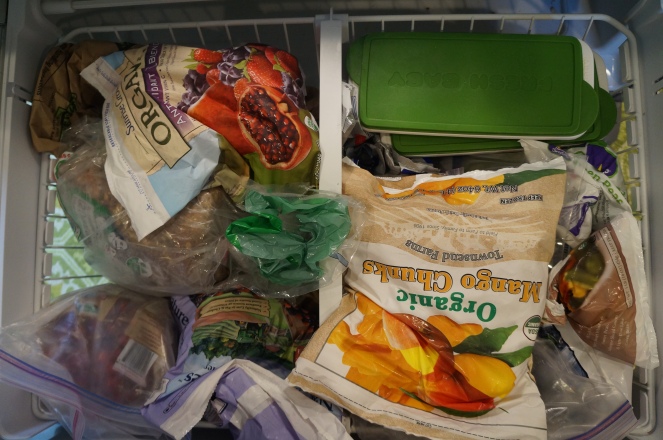 These are the ice cube trays for baby food servings: 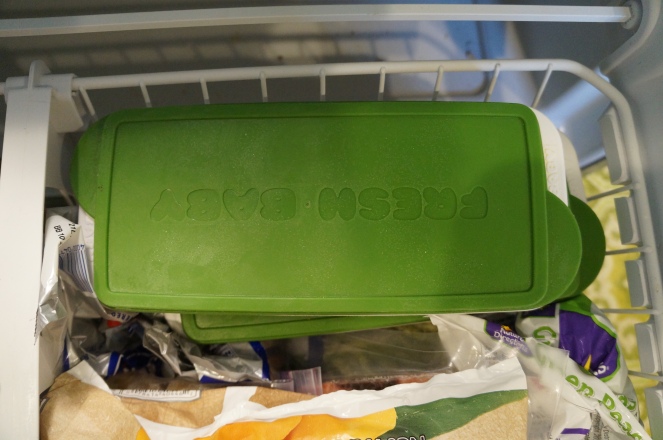 Well, there’s our kitchen! We just have to keep it up!

5 thoughts on “Home Organization 101: The Kitchen”