Out to breakfast (an increasingly rarer scene, now that he throws food and wants to run around):

Shielding his eyes while napping:

One day I was ignoring him, trying to get something done, and when I realized the whining had stopped I looked to see what he was doing and discovered that he had invented a game for himself with his crayon mug and one of the rings from the ring stacker toy – he put the crayons through the hole in the ring:

This is not a picture of Ari; I was just surprised to find color in our freezing yard:

Also not Ari – beautiful colors on a sunny November day! 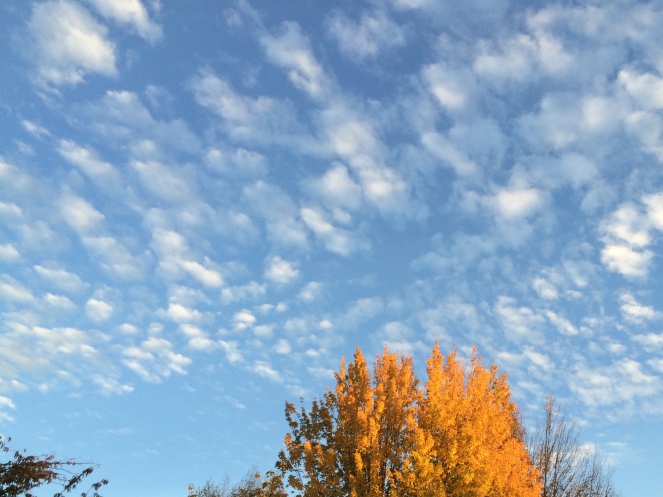 That day, I tried to get Ari to rake leaves with the miniature rake I got him, and he somewhat obligingly jabbed it around. Then I threw him in a pile of leaves! 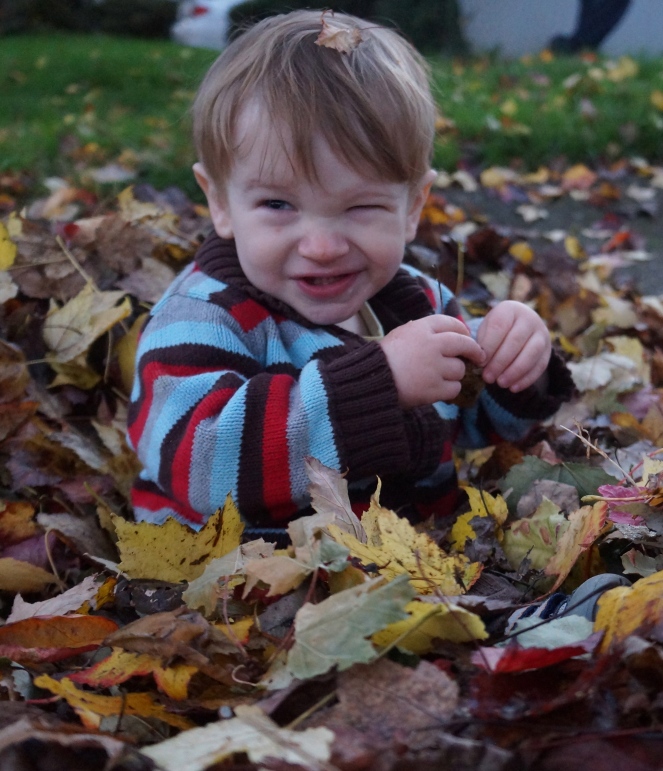 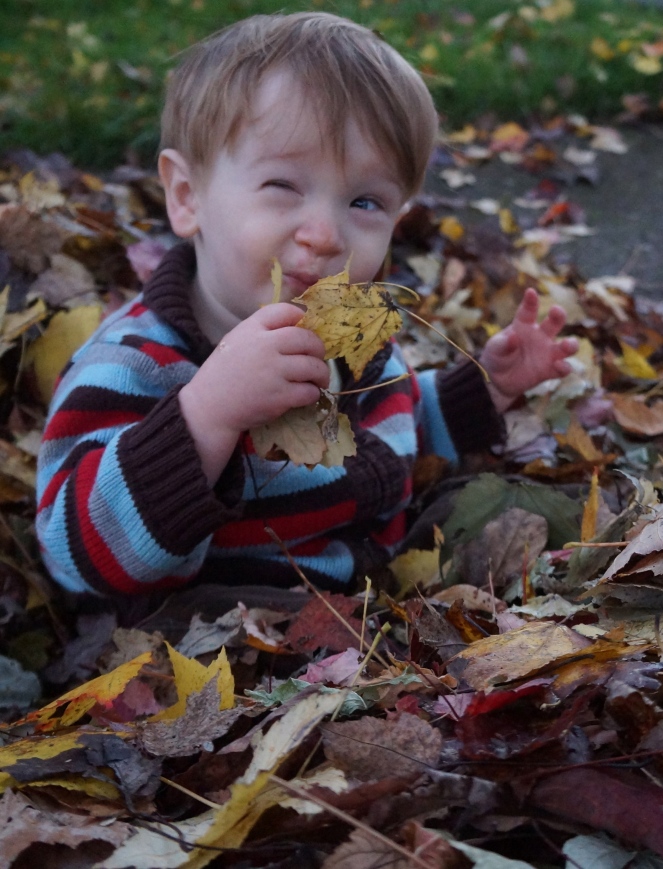 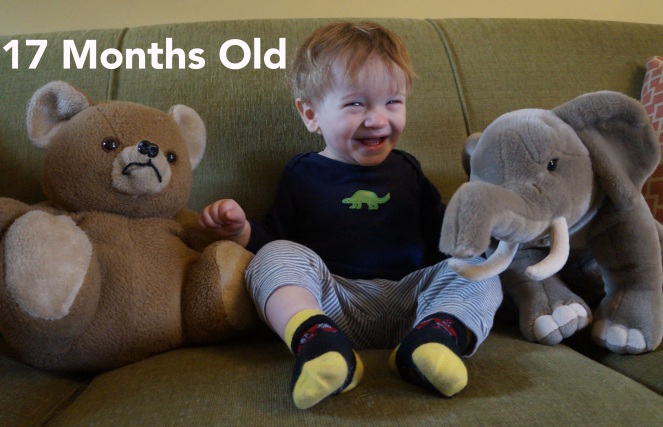 Then, his mobility and independence. For the first picture, I used the bear as a support to prop him up; now he sort of uses the bear for the same purpose…

We went to OMSI with friends and he showed me how he throws the balls in this tank since he can’t reach it yet: 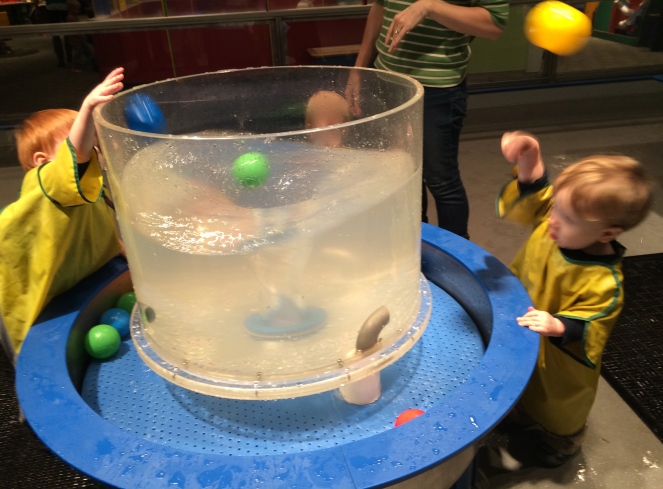 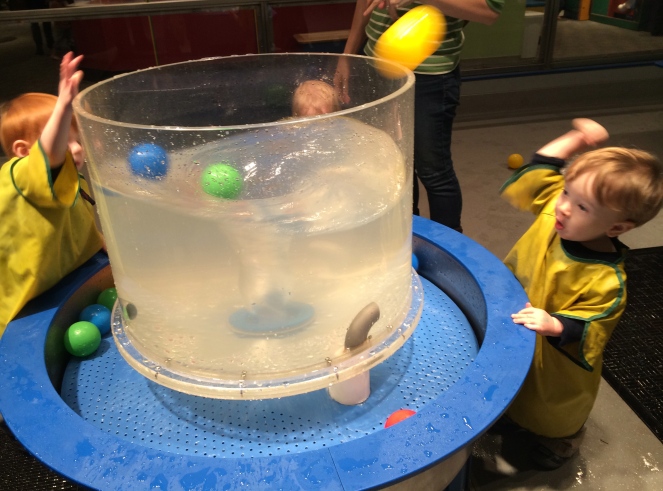 We had dinner with family and they brought out this activity table that I think is a little over 20 years old. The gaudy plastic baby toys of the ’90s were so much less obnoxious than today’s! No buttons to activate flashing lights and music here!

We had a lovely, relaxed Thanksgiving with our friends and their new baby. We pulled out Ari’s swing for the baby and he climbed in and started rocking himself in it!

Ari pretty much only sat at the table long enough for a picture. He wasn’t very into the food even though it seemed pretty toddler-friendly to me! 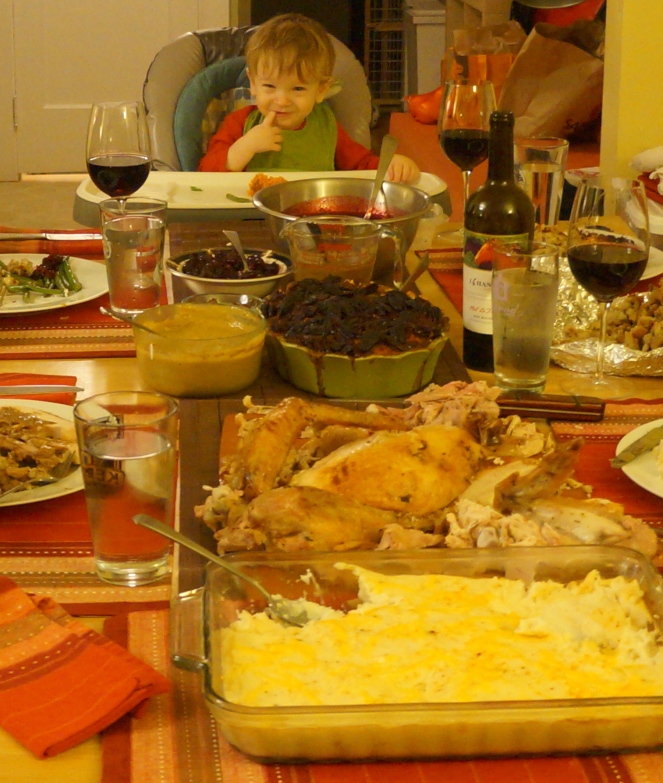 He has some cozy new PJs…

This morning, we went to Café au Play and they had trees for sale. Ari looked like a little lumberjack! 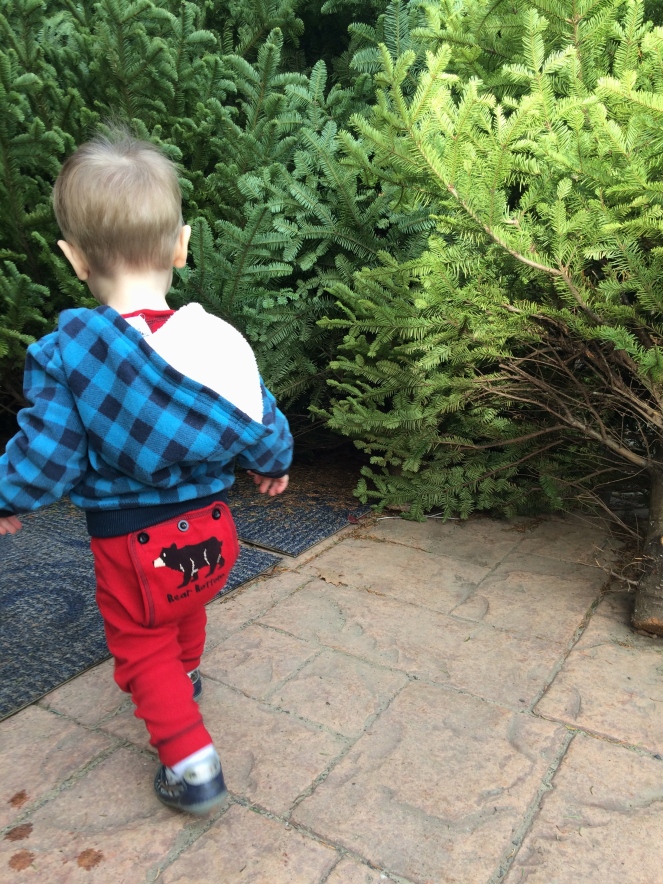 Well, now I have a lot of writing to do about how much he’s grown and changed in the last few weeks! I read about how babies/toddlers start acquiring tons of new words (10 a day?!?) in the second half of the second year, and I can definitely see that starting to happen with Ari. Check out this article and this article about toddler development. It’s funny; I read these things just before Ari gets there and think, “No way, he’s not even close to doing that!” and then all of a sudden he hits the right age and he’s doing it. I know no one’s ever said this before, but THEY CHANGE SO FAST!!!

Let me give you the trajectory.

November 4th: Ari started saying “no.” First it was a line in a book he said just before we said it while reading to him. But now…has it only been FOUR WEEKS?!? Because we sure have heard that word A LOT!! For the next week, especially, Ari wanted to read that one book over and over and over.

November 10th: Ari found his belly button! Now he has a cute trick. And he is SERIOUSLY cute poking his stomach out, tucking his chin as far down as he can, and sticking his finger in his belly button. (Sorry, no good pictures…)

Also on November 10th: He put his toy phone to his ear and babbled. We have pretend play! Some time later he started saying, “Heh-whoa?”

November 14th: A. and I celebrated our 5th wedding anniversary and got a babysitter and got dressed up and went out to a nice restaurant. Yes, this was a milestone!

He now says “hot” when he’s near hot things. I think he’s started saying “read”. He mimics “paw-bee” for potty. He says his name, “Ah-wee.” I thought it might never happen, but he does animal sounds for cat, cow, horse, sheep, goat (“meh”), bat (“eee”), and fish (opening and closing mouth).

All month, pretty much all he’s wanted to do is have books read to him. He’s started mimicking words and phrases and saying them when we reach the right page in the book. He mimics the line, “I don’t want to!” in his potty book (referring to not wanting to go potty in a diaper) as, “Ah! Doh-wah!” We got him “Go Dog Go” and he LOVES it and calls it, “Gah! Go-wah!” When I read “I’ll Love You Forever,” he rocks back and forth in the appropriate places.

He can follow instructions like “go get your hat” or “go play with the trains” or “give this to the dog” and we can ask for certain books by title. I’ve started asking him to carry his cereal or soup to the table “very carefully” and he does! Without spilling! And he looks so adorably serious while he does it!