Once again it’s been forever and now I have so much catching up to do!

We started December with an amazing trip to the Big Island of Hawaii. It was a great chance to relax, be warm, remind Ari that he loves the water, and be together as a family. I had several itineraries for day trips I wanted to do but none of them would have been fun for Ari, or all that much fun for us with an unhappy Ari, so we mostly just played at the pools and beaches where we stayed. We still didn’t do much lying around, having a toddler to keep up with! Most of our relaxing was done in our room while Ari napped or after he went to bed, but that was still very pleasant. We also got to visit with my aunt who lives over there and with a good friend of my mom’s (and mine) who hadn’t met Ari yet.

I had a funny interaction in the water at the beach with an exasperated father chasing a little boy who was running around trying to take everything every other kid at the beach had. I said something about how Ari wasn’t even 18 months yet and the conflicts and tantrums or whatever were already challenging us, and he said – in passing while heading after his son – “yeah, well, he just turned two and we are DEEP IN IT.” And then he was gone. I thought he pretty much captured the intensity of parenting a toddler!

Anyway, getting there wasn’t too bad. We had a seat for him in between us (yay!!) and he slept for about 3 hours of the 6-hour flight.

Day 1, after we arrived: So excited!

First I had a morning “oceanside” yoga class, which gave new meaning to concepts such as “reach for the sky”. The warm breezes and blue sky and water views are not included in my normal yoga classes!

Then we played on the beach… 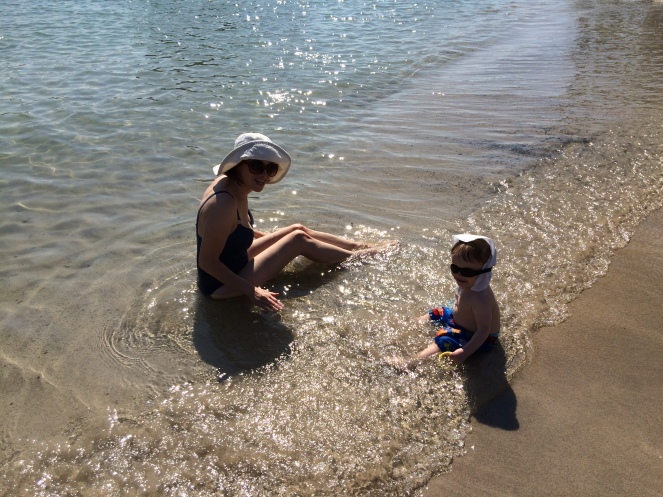 And had nap time… 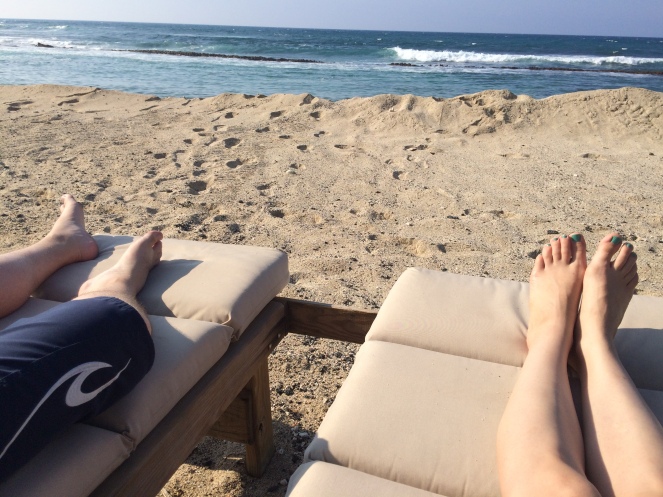 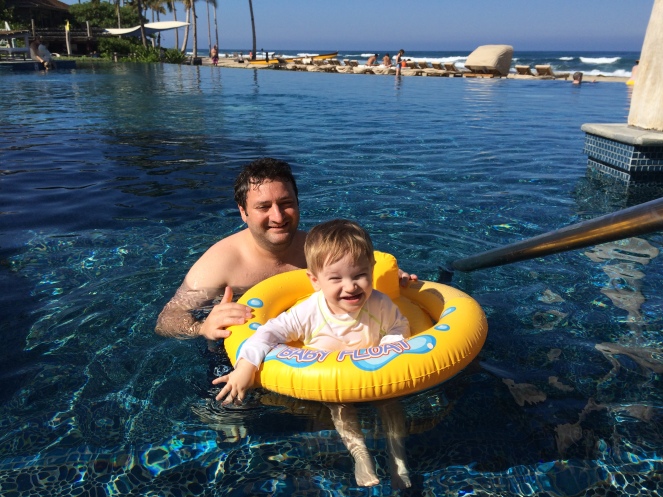 We went to a children’s play area at the resort and he brought me this doll, saying “baby!” I put it in the stroller and he pushed it around. 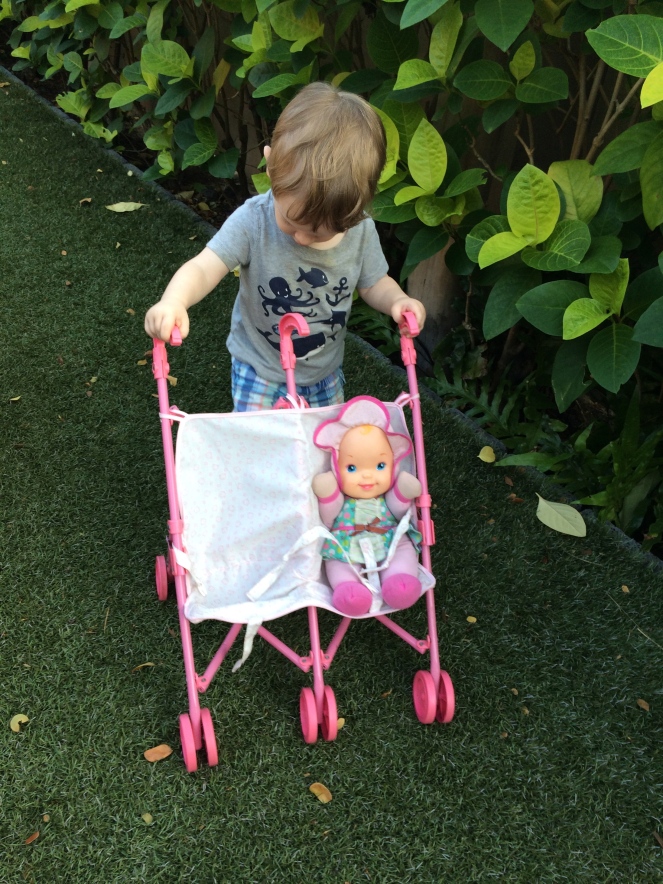 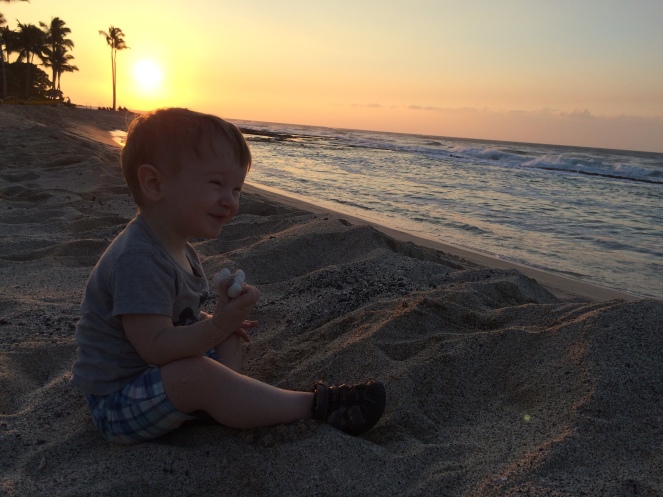 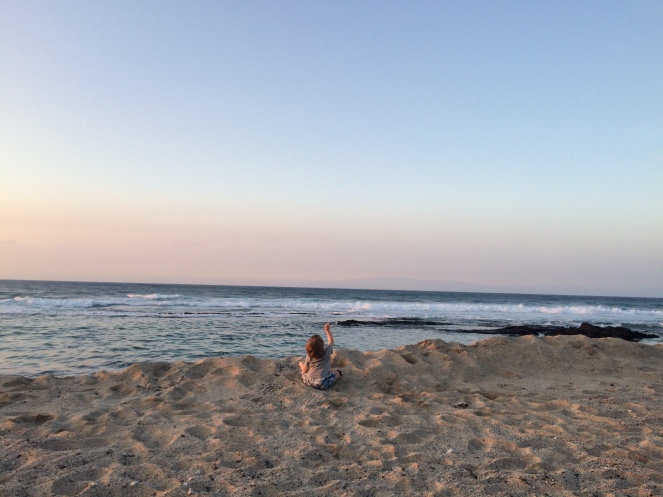 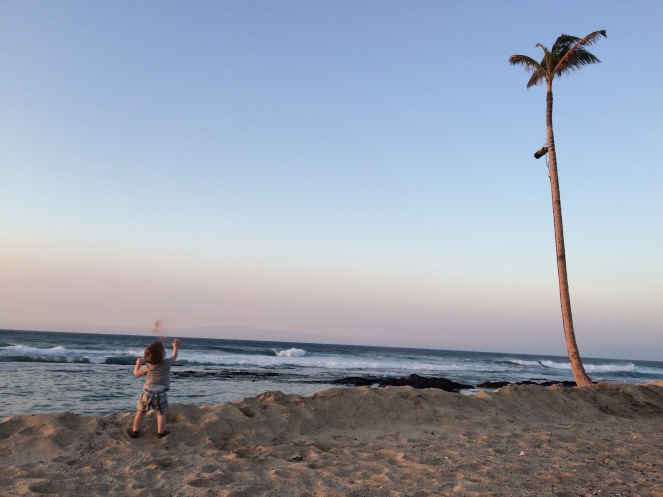 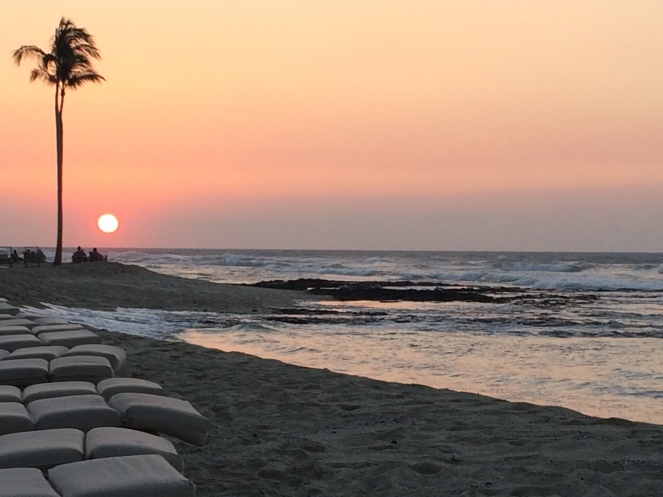 Day 8: The beaches were mostly covered with lava rocks so there were no long beach walks like I’ve enjoyed on Oahu, but this path was much easier with the stroller anyway! 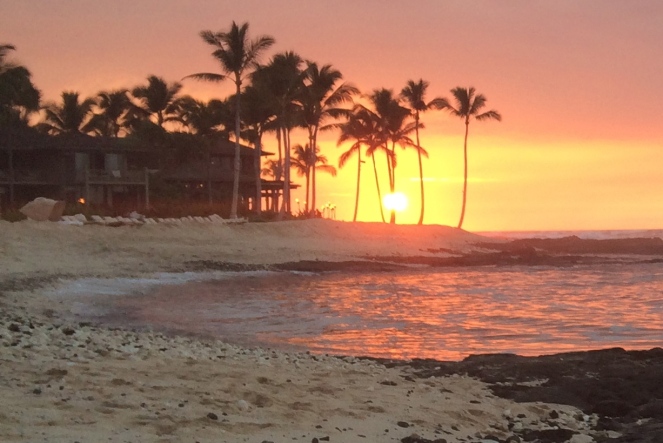 When we got home, Ari and Andrew were SO excited to see each other! I set Ari down on the sidewalk outside our house and A. let Andrew out of the house and he came running down (and jumped right in the taxi we’d just gotten out of) and Ari started shrieking, “Doggy! Doggy! Doggy!” hysterically. He kept it up all the way into the house and in our living room while Andrew went crazy licking his face and running around.

Four days later, Ari was one and a half! 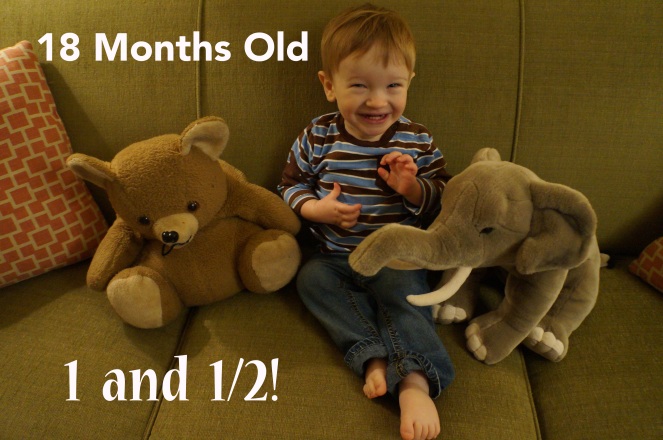 Ack, he’s a little boy now! He looks really giant in the picture below.

He’s started hugging stuffed animals and saying, “awwww”. He doesn’t always hug the typical end, though. Also before he goes to sleep now he kisses his tiger doll (“mmmah!”) and lays it down and pats and rubs it, saying, “ny-ny…” 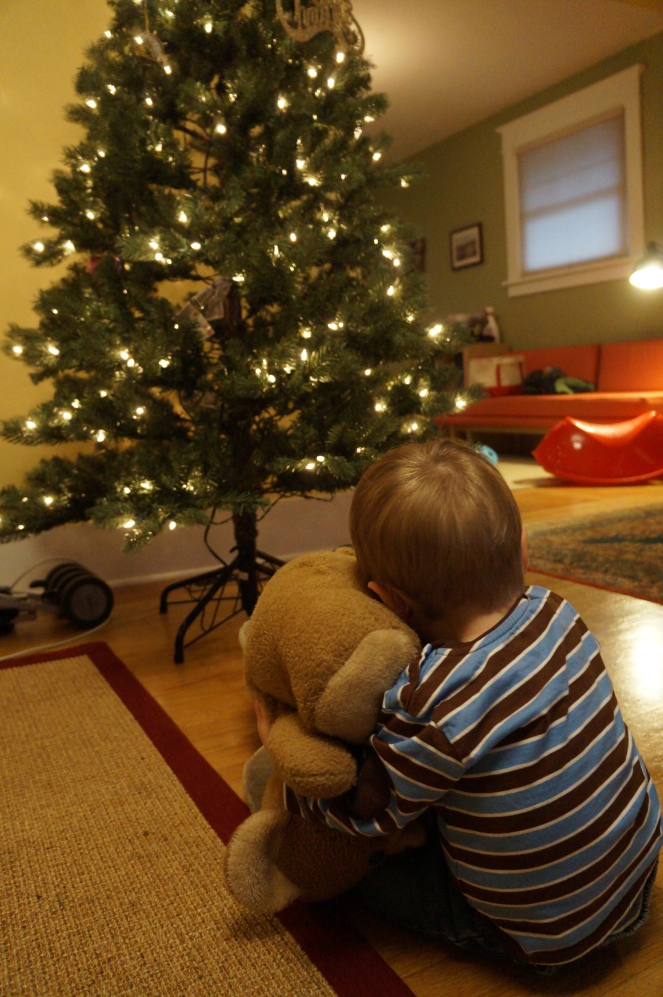 We went Christmas shopping and had coffee (or, in Ari’s case, pureed fruit) with friends: 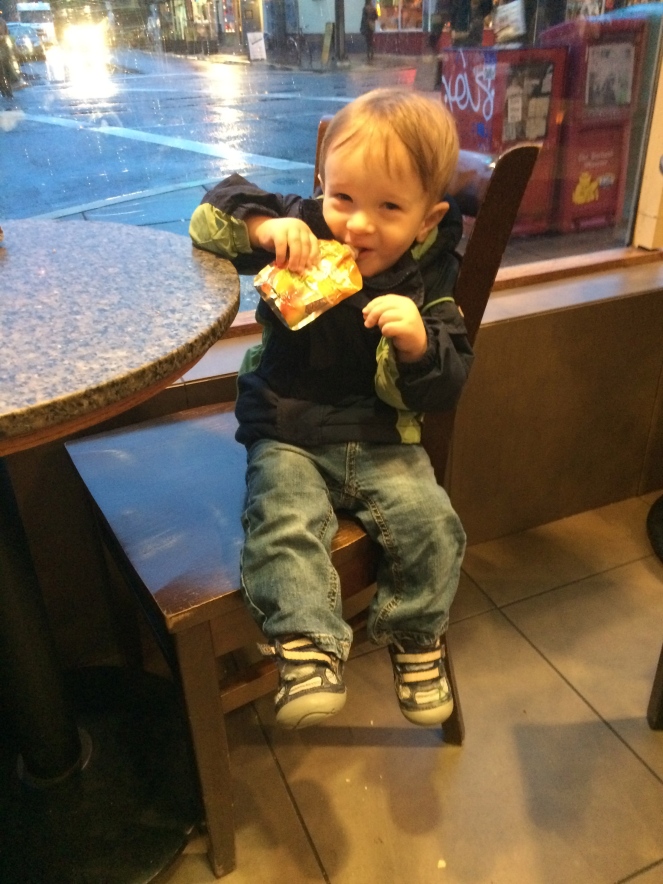 Then we had a fun Hannukah latke party with friends: 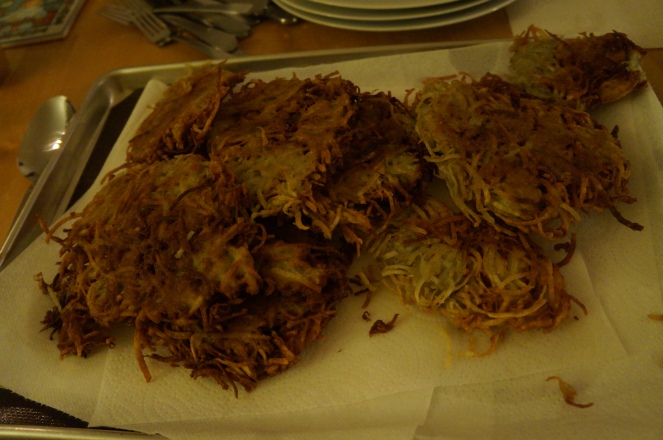 My parents, aunt, and grandma came down to visit for an early Christmas and we had so much fun with them! We did some swimming, and saw Santa, and here is Ari putting crayons in a little box, which he did over and over: 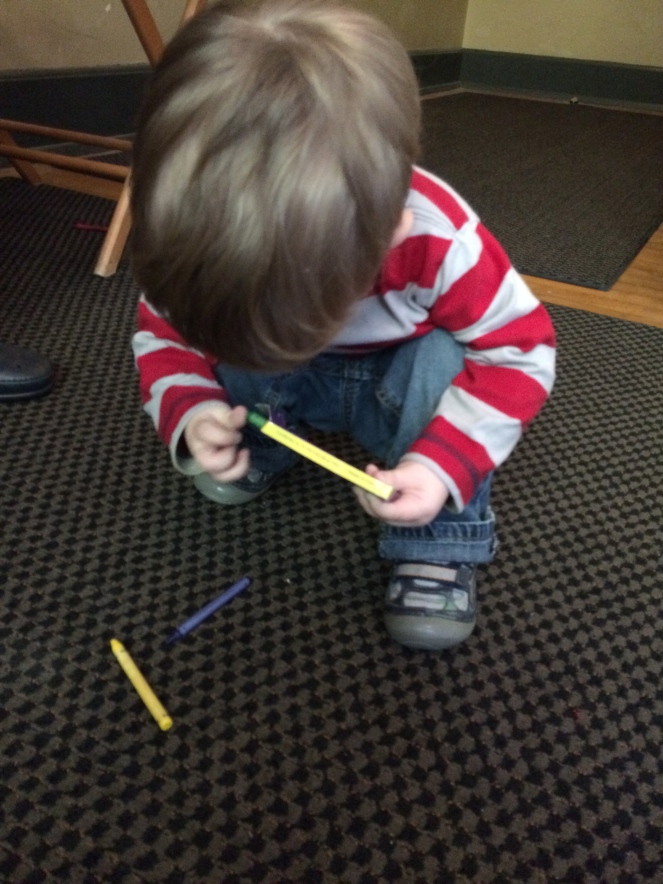 All the socializing wore him out!

We doggy sat my friend’s dalmatian:

Then we had Christmas with A.’s brother and his wife! We started the day by going out for Dim Sum with our Jewish friends, which is becoming a fun tradition. Then we went home and opened presents. 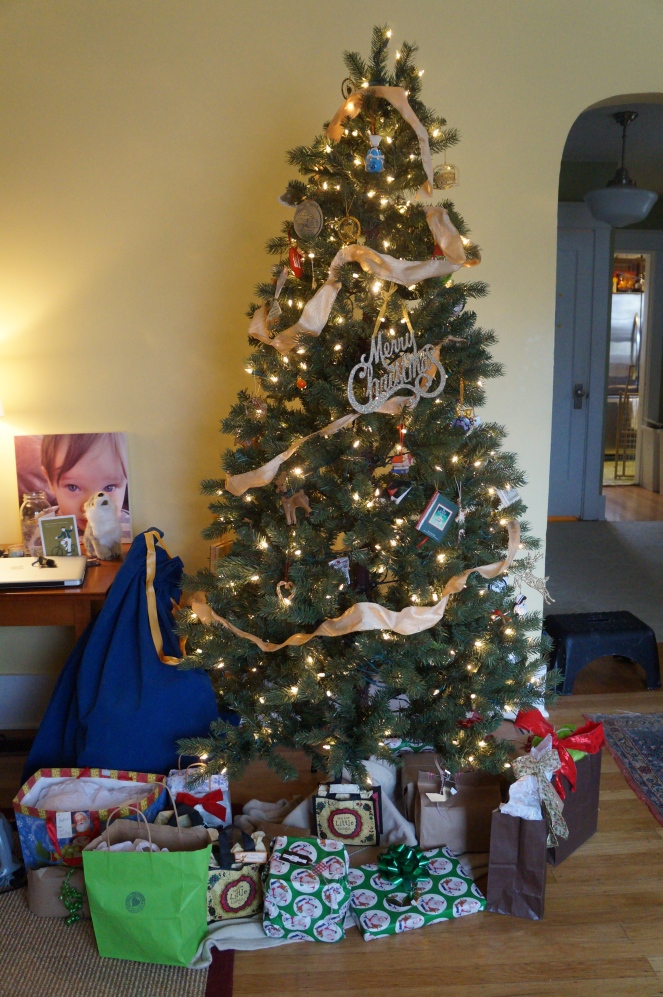 Ari wasn’t very excited about opening anything and it didn’t help that we started with this one!

“How about we just read this book, Mom.” 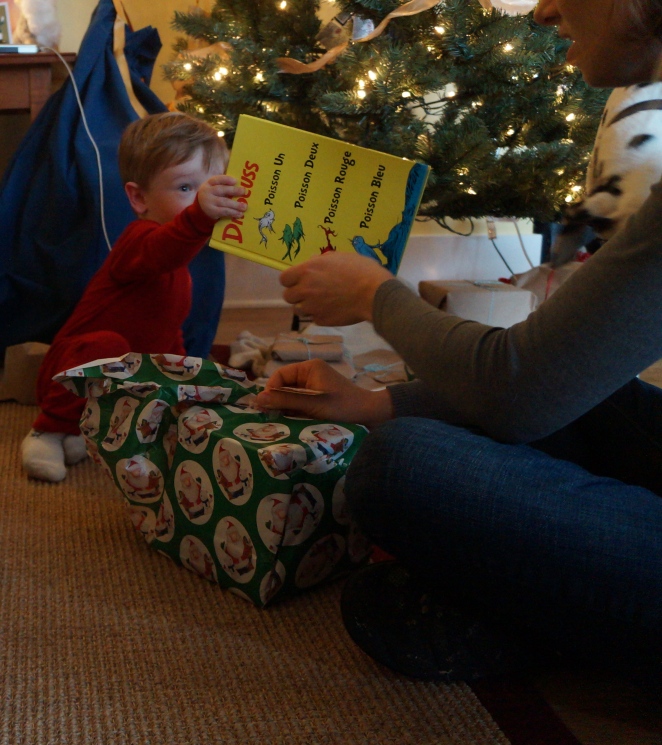 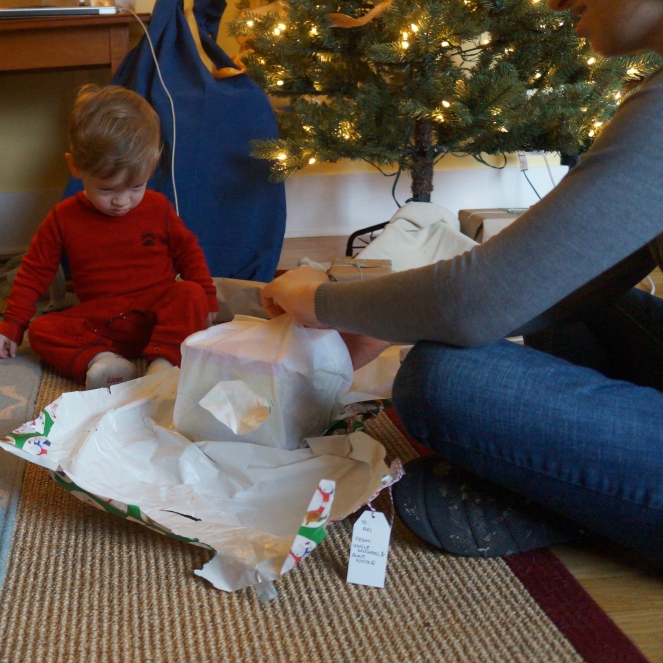 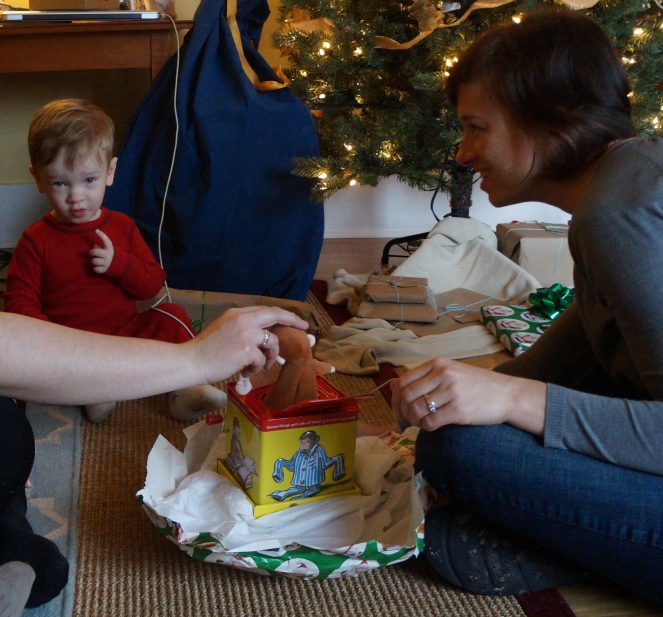 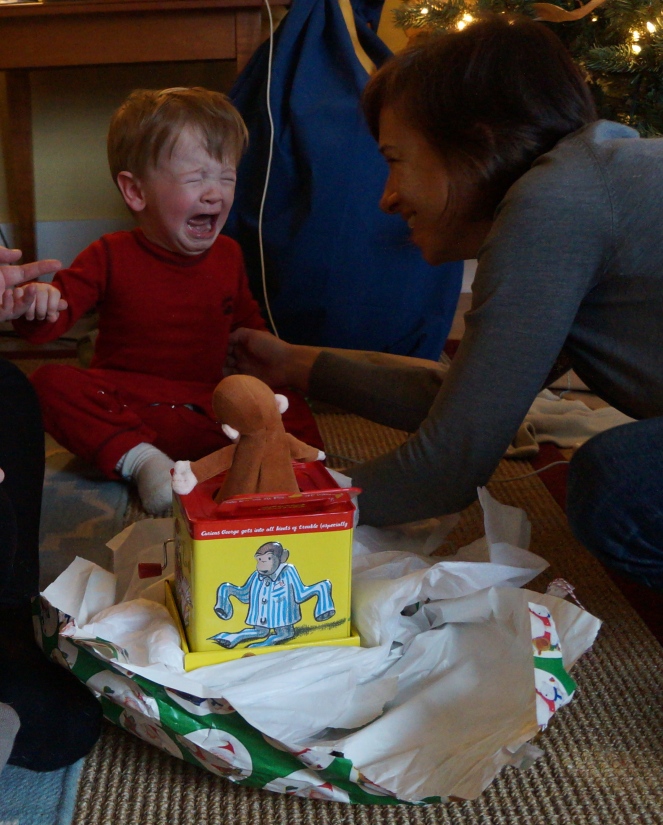 After that he didn’t want me to open anything else in front of him! He would say, “No!” and turn away. But he kept approaching the jack-in-the-box and wanting us to play it with him and he got more comfortable with it. He liked saying “bye bye” and pushing the monkey back in the box, and now he’ll point at it on his shelf and call it, “bye bye!”

He loves this cloth book with little animals that you put into homes. We’re impressed by how quickly he picked up which animal goes where. He likes to start putting an animal in the wrong place and say, “No-oh!” and then put it in the right spot. How very Montessori of him! 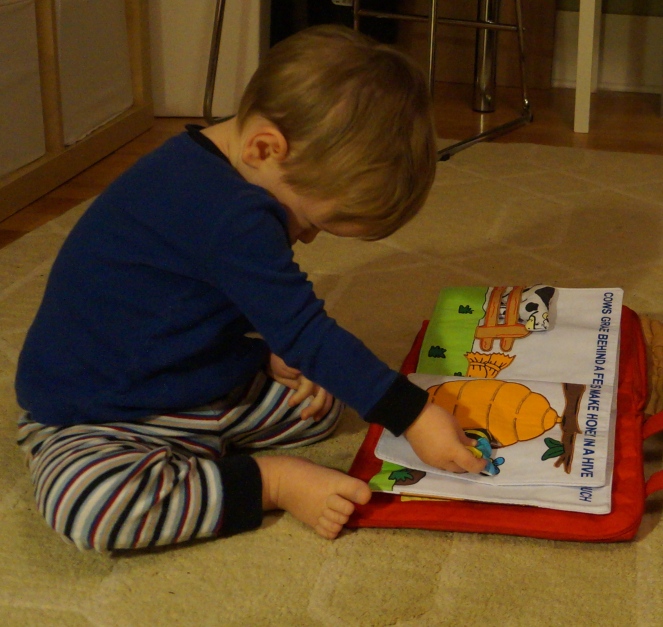 We had a cold, wet trip to the dog park with friends, and Ari was a trooper for most of our time there:

He cuddled with his cousin Ginger on the way back – he wasn’t happy unless she was in his lap:

We had an evening Fred Meyer run and he pushed this little cart around, hid from me behind clothing racks, and ran down the aisles away from me giggling maniacally. It was terrifying for me when I couldn’t see him for a couple of seconds!

At the end of December, A. had some vacation days and we got some days off together, hooray! We had fun as a family and had one day when Ari was at “school” and we got to do a lot of housecleaning, organizing, and decluttering. 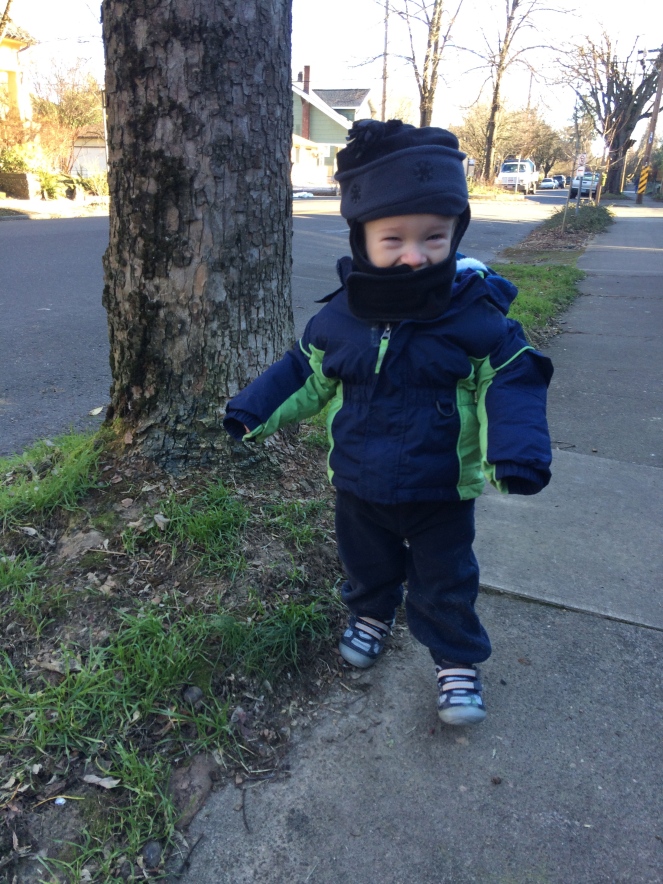 We went to one of our favorite Mexican places, Mi Mero Mole, and Ari sampled all the salsas with some really impressive dipping technique! I was also impressed by his spice tolerance, although one of them was too hot for him and he was unhappy about that for a moment. We did try to warn him about that one!

At home, one of our decluttering project areas was our entry, and I think we did a great job with it! We even gave Ari his own coat hook. One of the things I really liked about the Montessori method when I was pregnant and reading about it is the emphasis on promoting independence by using child-sized furniture and tools. I envisioned buying and installing some fancy toddler-sized furnishings but I think this temporary hook will work fine for his coat! He can remove his coat by himself with a little verbal coaching to lift “up” (so when he goes to get his coat now he stands there saying “up”) and to put it back we have to help him find the little loop on the coat and then lift his arm up to get it over the hook. But he’s really trying to do it himself! Recently I’ve been letting go of my Montessori-style aspirations because I’m trying to avoid any added stress, and I’ve been telling myself it’s no big deal for me to keep getting his coat for him off of our hooks, but watching how proud he seems to feel when he gets his coat or hangs it up has re-ignited my interest in finding ways to set things up so he can perform basic daily activities independently. I want him to grow up feeling competent and capable! Just having things organized and simplified in general in our house will be a good start to help all of us feel more competent and capable. 🙂 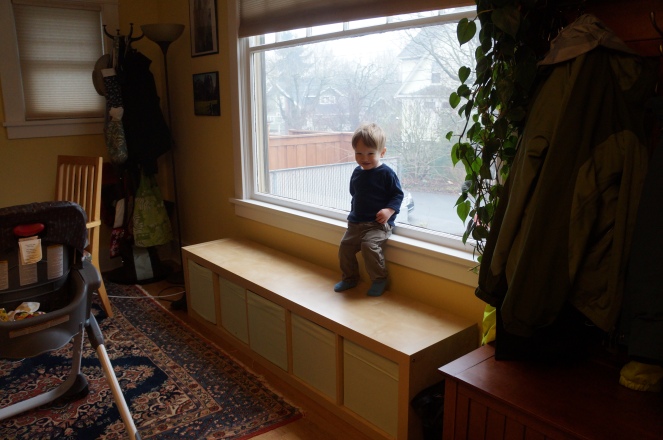 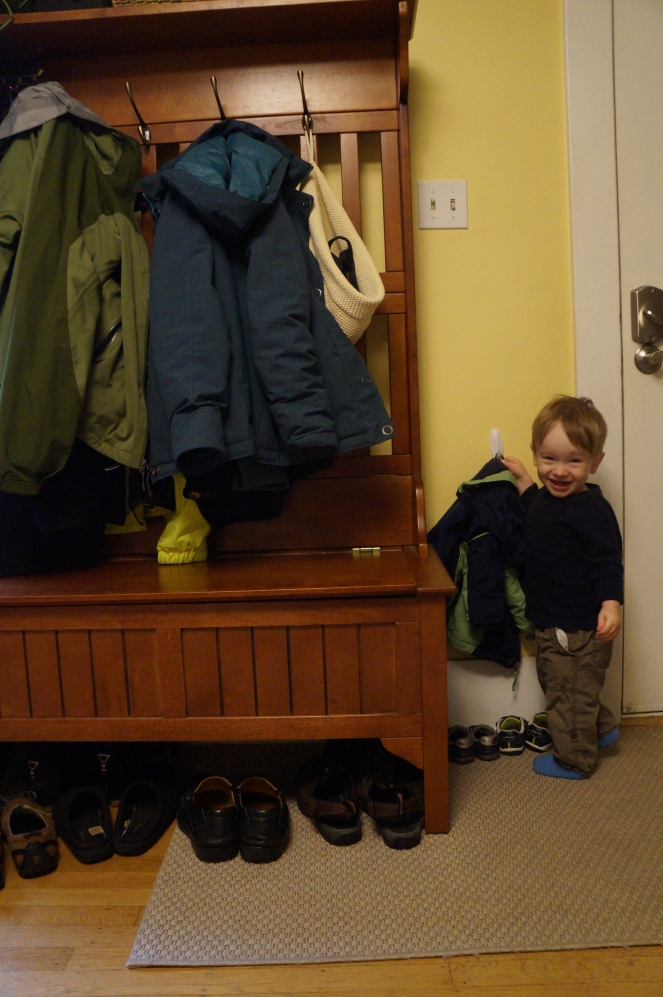 Another project we tackled was our basement. Ari loves to climb on this chair and start typing! Believe me, this desk is looking a hundred times better than it used to. We also cleared out a bunch of space and then went and got a futon and a coffee table that I’ll photograph when the cover and pillows arrive. 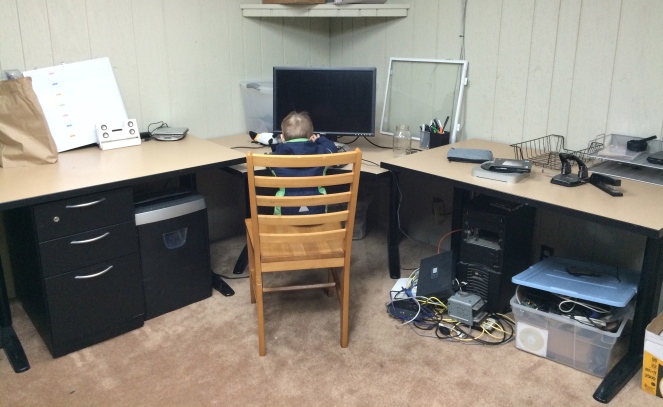 Finally, here are a couple of pictures of Ari with his new favorite activity book!

Oh yeah, and goals for this year! Our “vision board” is still in progress but we’re going to be focusing on these general goals:

Continuing to declutter our house! We want to be minimalists with streamlined lives!

I want to get in the habit of getting up early regularly and doing yoga and meditation. On my work days, then, it will be easier for me to arrive early enough to eat my breakfast there before my shift starts, and then I will feel more “together” and better about my day.

I also want to do more pampering things because I really enjoyed the pedicure I got for Hawaii and the facial I got in Hawaii!

We have some trips planned and some activities we want to do, like swimming and camping.

Oh yes, and I want to start biking to work once the new bridge is completed!