Well, by now Ari is almost 20 months old but I’ll post the photos up to mid-January in this post and catch up with the rest later.

First, a little about his development and new things he’s doing!

He’s doing “pretend play” now – he’ll lay a doll (or a water bottle…) down and pat it, saying, “night night…” One morning when I was still trying to sleep he started patting me and saying “night night”! He kisses everything with a “mmmah!” sound. And he loves to wiggle his fingers around over us like he’s tickling us! He tries to tickle himself, too. And he thinks it’s hilarious to wash his chest and belly himself in the bath.

He also says “no” and “all done!” a LOT. And he gets frustrated when he can’t do things himself and will collapse on the floor, sobbing. Some days I want to cry myself when he’s been whining and crying off and on all day and I can’t figure out why. For example, he doesn’t want to eat anything, then he asks for cheese, then he screams with impatience while I get the cheese, then he’s so frustrated he won’t take it from me, then he starts eating it but I have to touch it for a second to remove the rest of the wrapper, and then he screams and throws it on the floor. Then he asks for more. This time I make sure to remove the whole wrapper, but then he shoves it away, saying, “No! All done!” So I take it away, and then he sobs, but still won’t take it from me. Or he keeps asking for a certain book, then we start reading it and he slams it shut and says, “No! All done!” Then he starts shrieking for the same book again and repeats the same scene over and over.

I’m a slow learner, it seems, but am beginning to see that if I make sure he’s rested, and I’m rested, and we eat frequently enough, and we get enough down time (I’ve had to cancel or show up late to some play dates recently when Ari hasn’t seen me for a while and he just can’t run around to different places any more), and I’m calm, things go better. We’ve also started to do three days of daycare a week instead of two, so we don’t have to scramble for sitters so much, and that’s giving me more days alone at home to get things done and helping me to be able to focus on Ari’s needs more during the times that we’re together. I’m very lucky to be able to do that! We’re also lucky to have such a great daycare, or “school,” that he loves. He marches happily into the room when we drop him off and can hardly be bothered even to say goodbye, and when we pick him up he doesn’t want to leave! They’ve started doing “circle time” now and it’s SO CUTE to leave him there in the tiny circle of toddlers, each sitting on their own carpet square, singing their little hello song to each person by name. The kids are all so much more verbal now! When we show up, two or three of them will announce that “Ari” is here, and I just melt.

Here we are out for brunch: 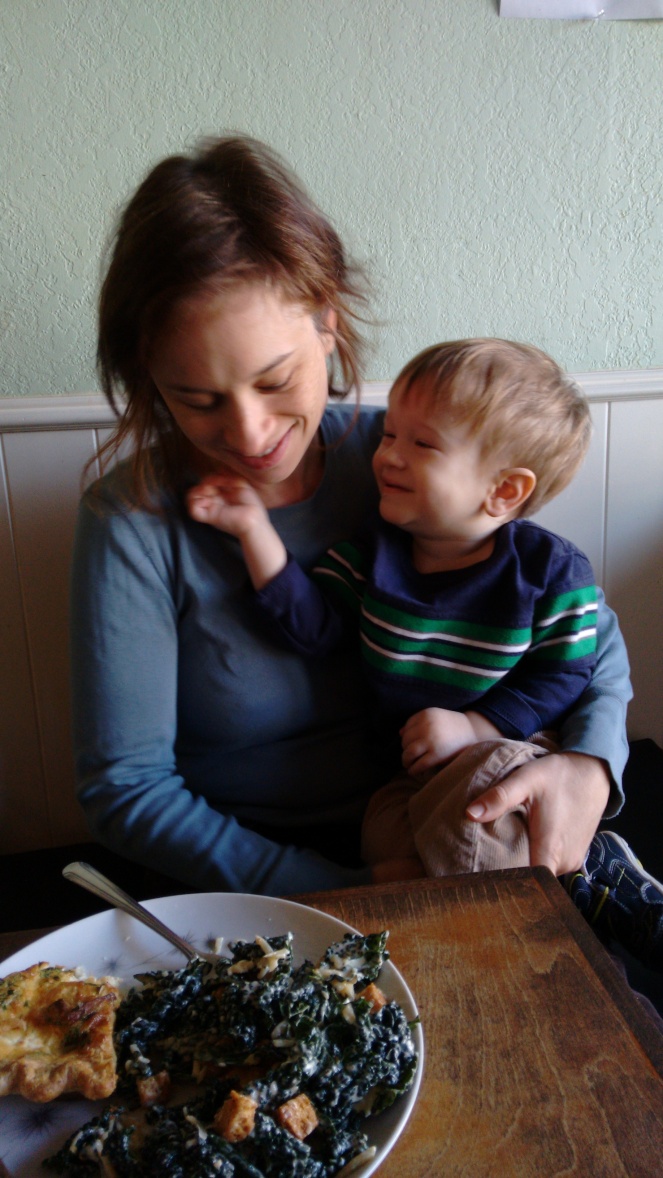 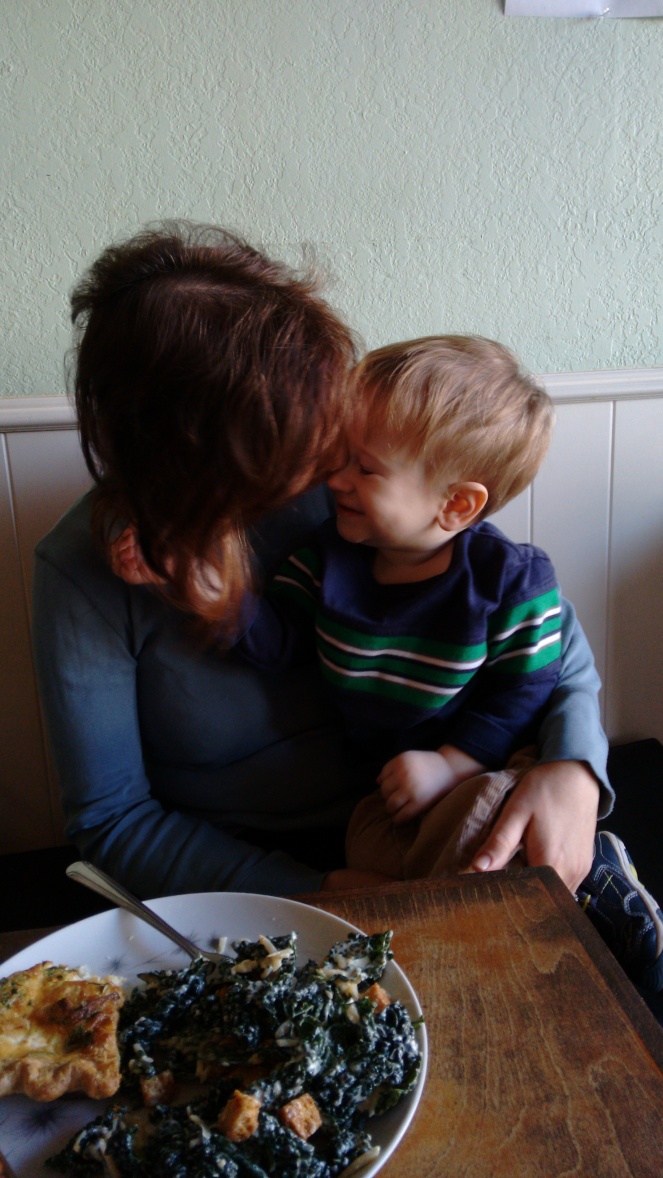 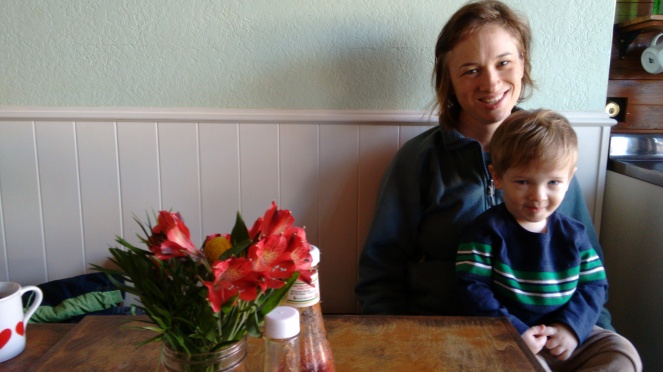 And walking and visiting with our friends: 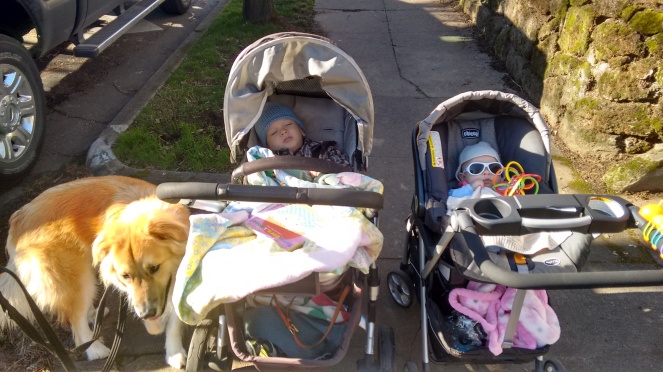 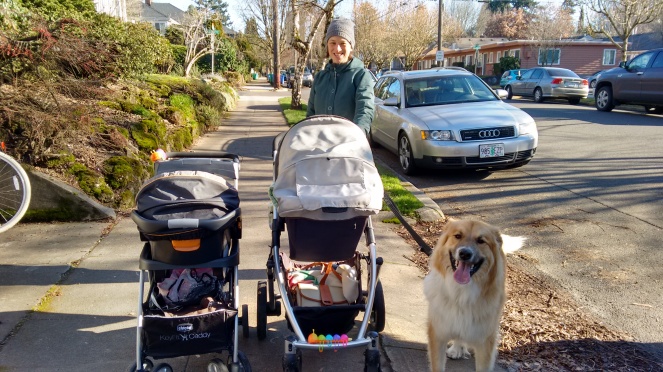 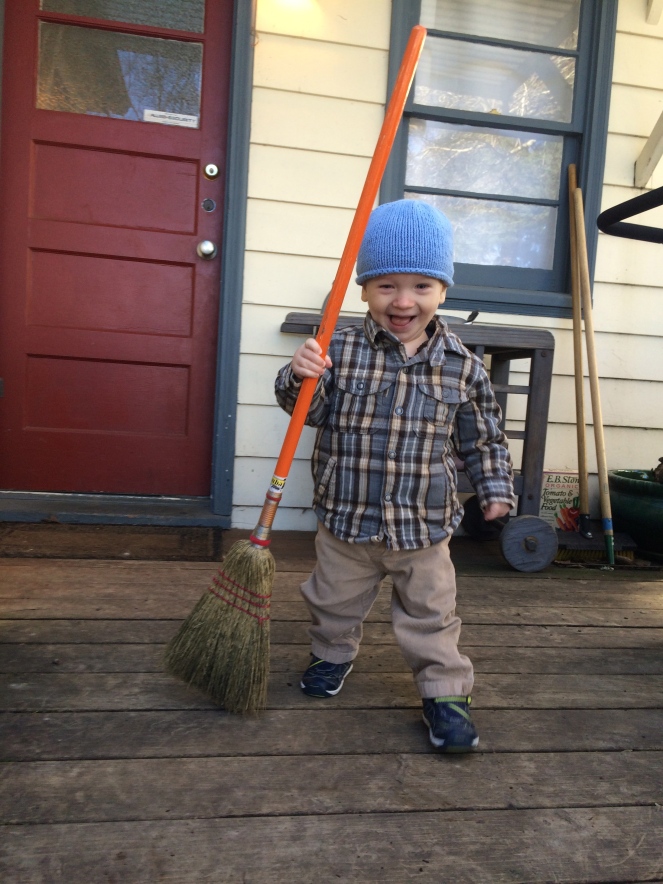 He was very excited about rocking the baby! 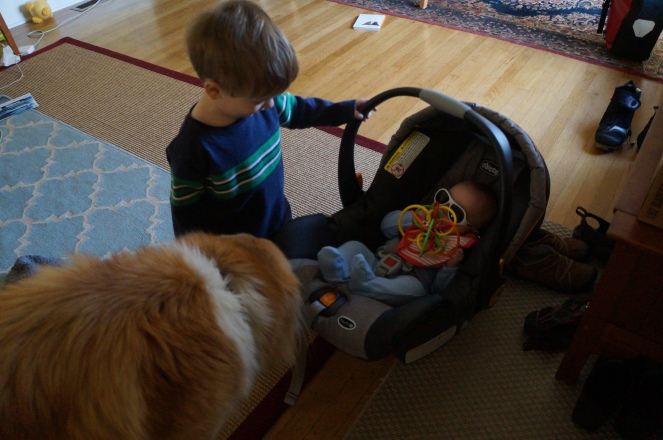 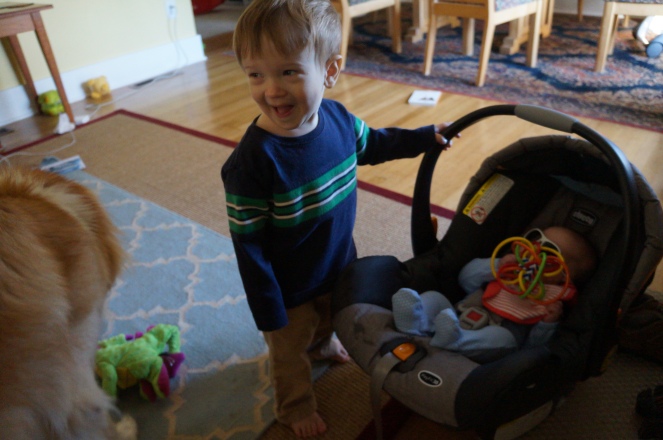 Trying to fit himself in his box of balls: 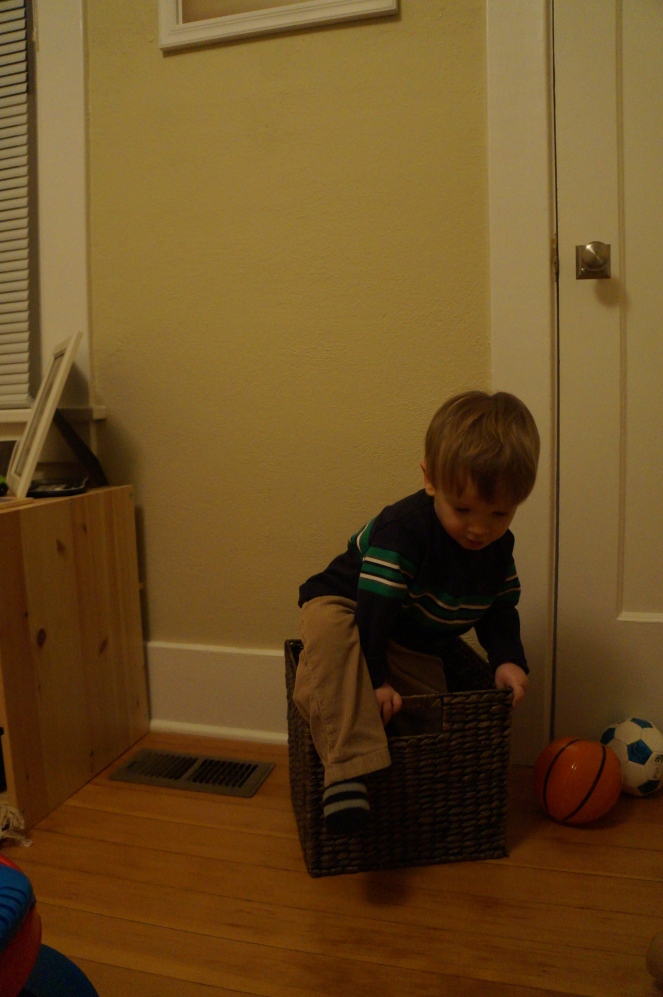 We traveled to Berkeley to visit a good friend and had lots of adventures!

My friend borrowed a coworker’s carseat so Ari had a new ride: 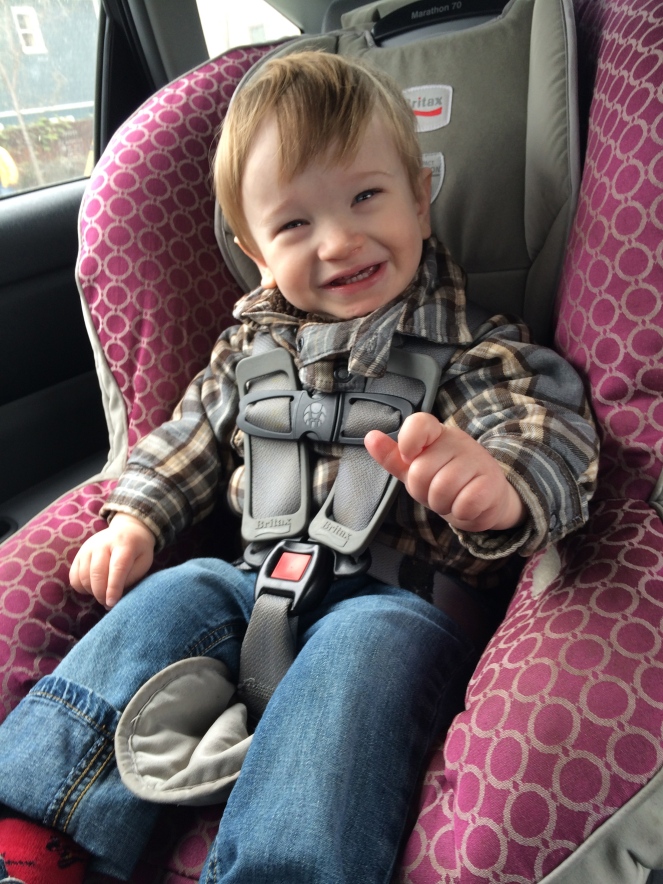 He loves pointing people out in this little photo book my aunt made him: 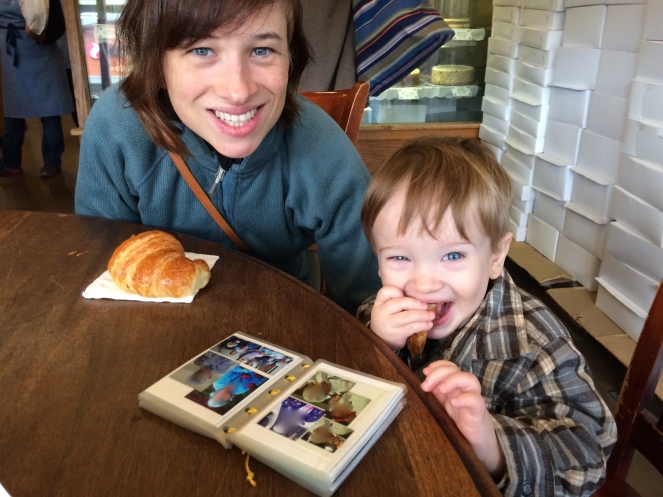 We went to the Oakland Zoo! It was Ari’s first time at a zoo. He saw this monkey and said, “Ah! Ah! Eee! Eee!” Then we saw a chimpanzee and he thumped his chest like a gorilla. 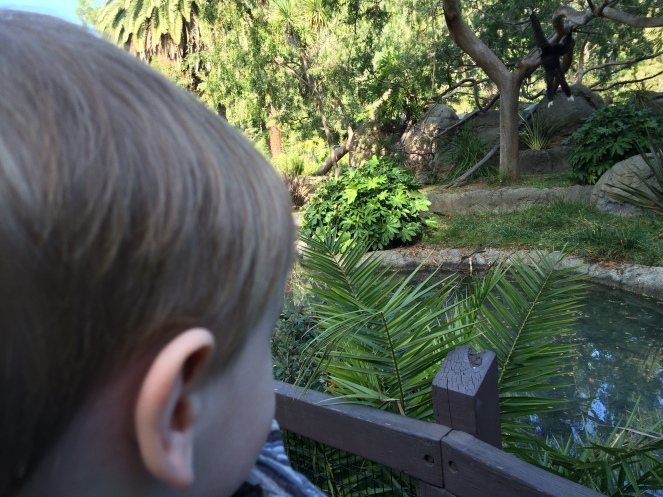 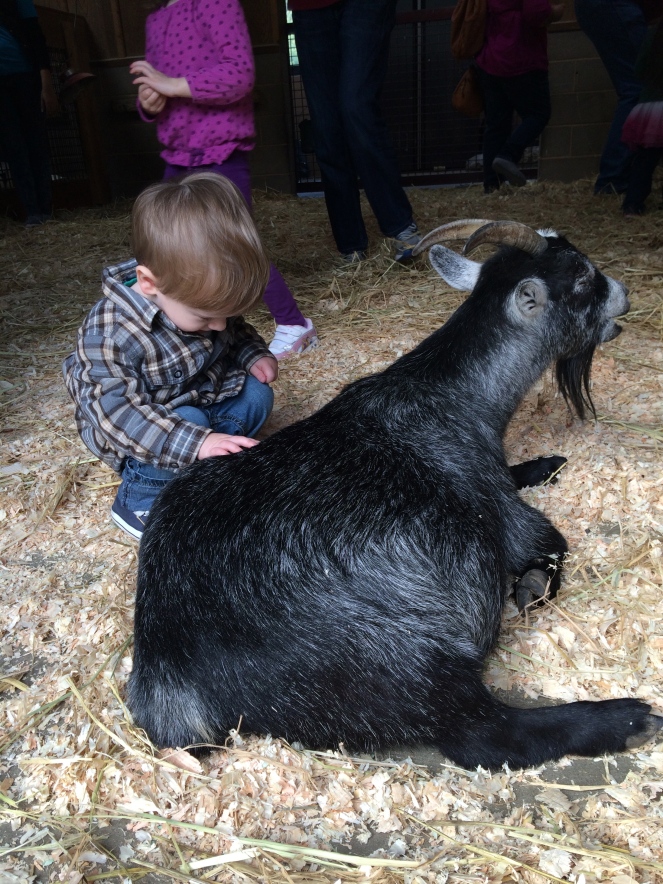 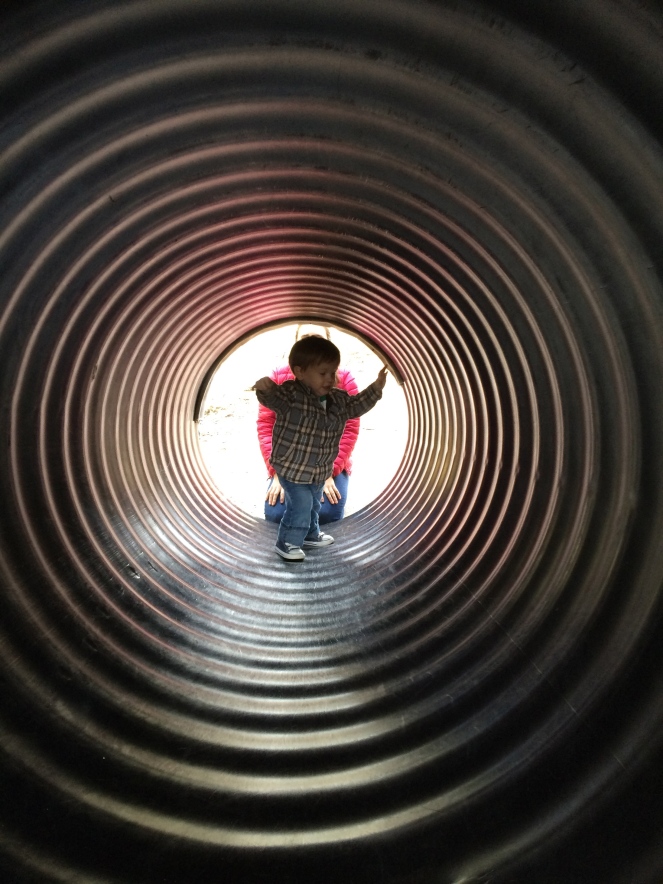 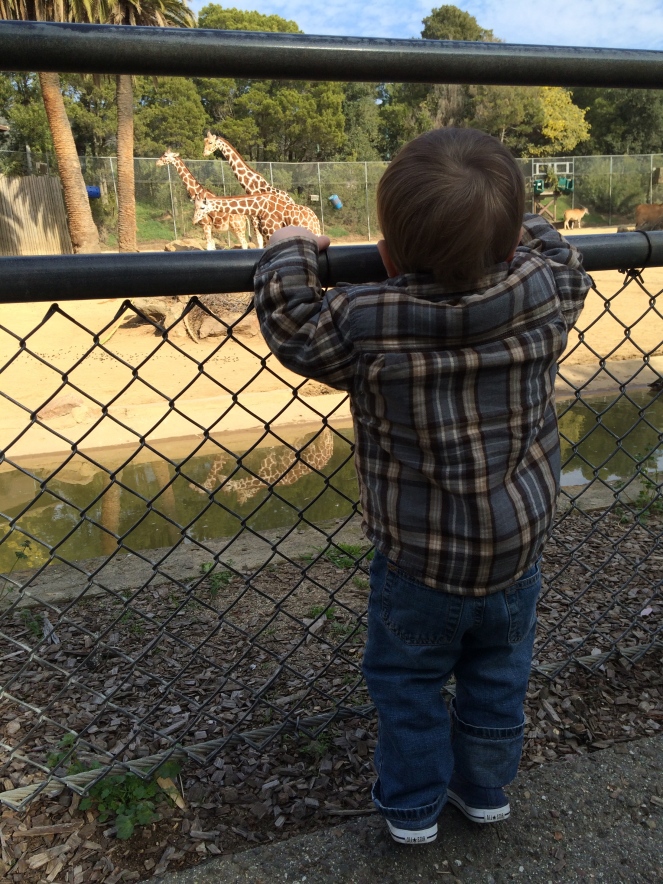 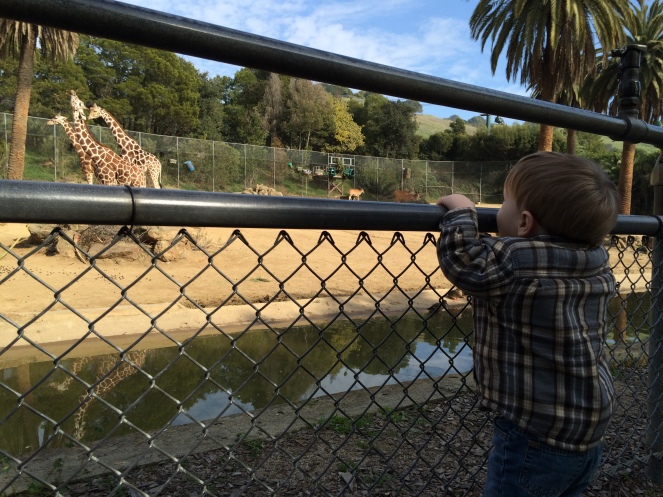 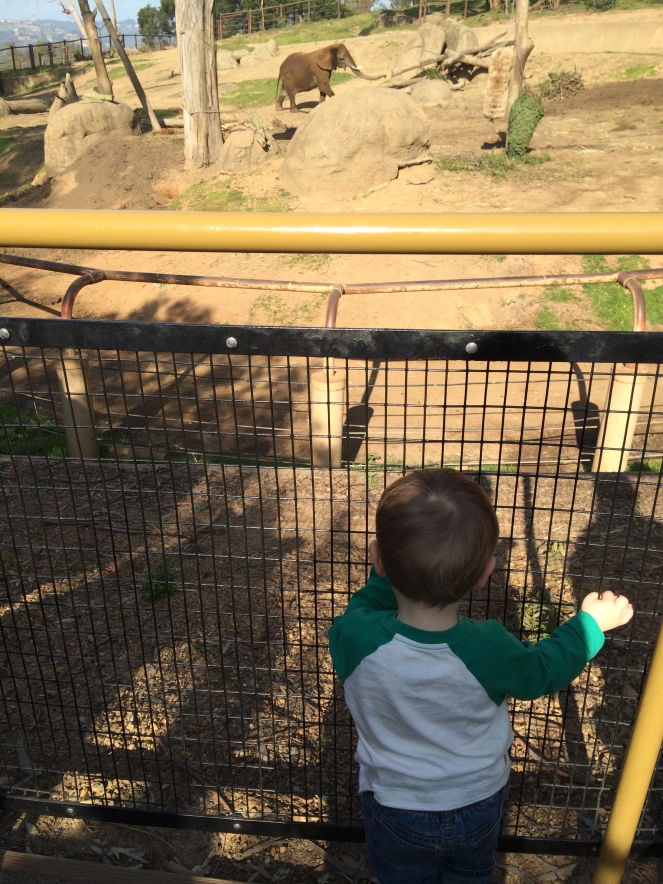 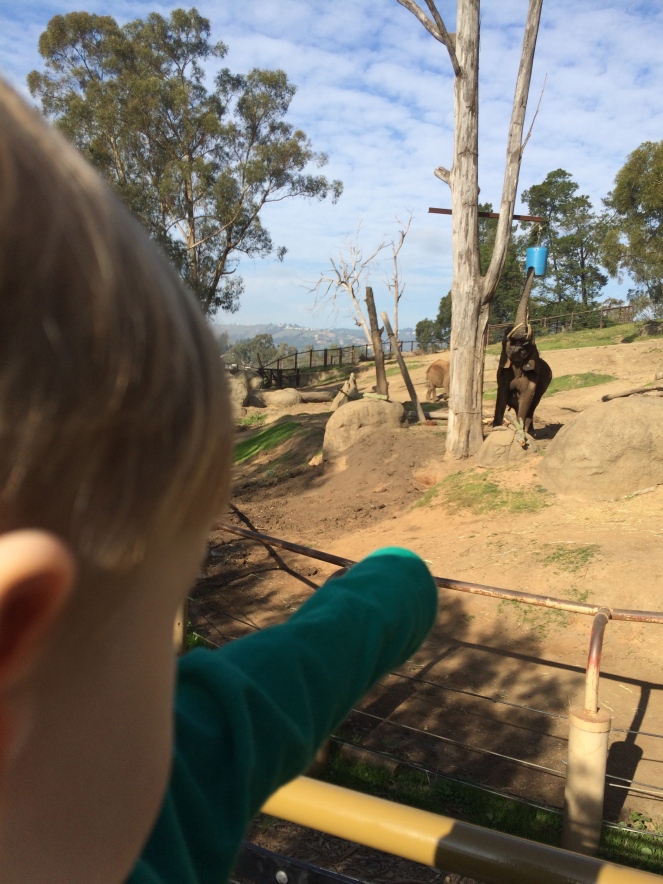 It was great when nap time happened during lunch time and I could eat and talk! 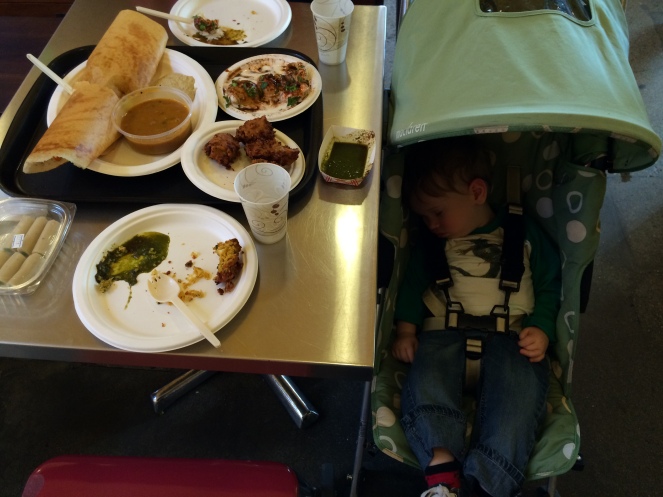 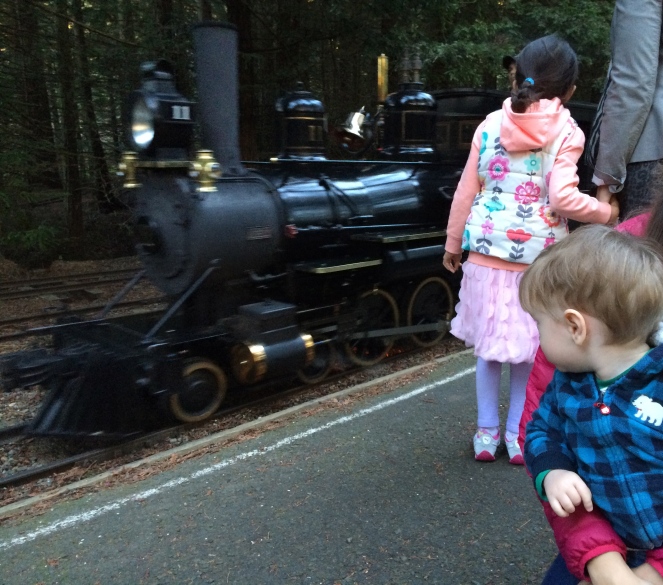 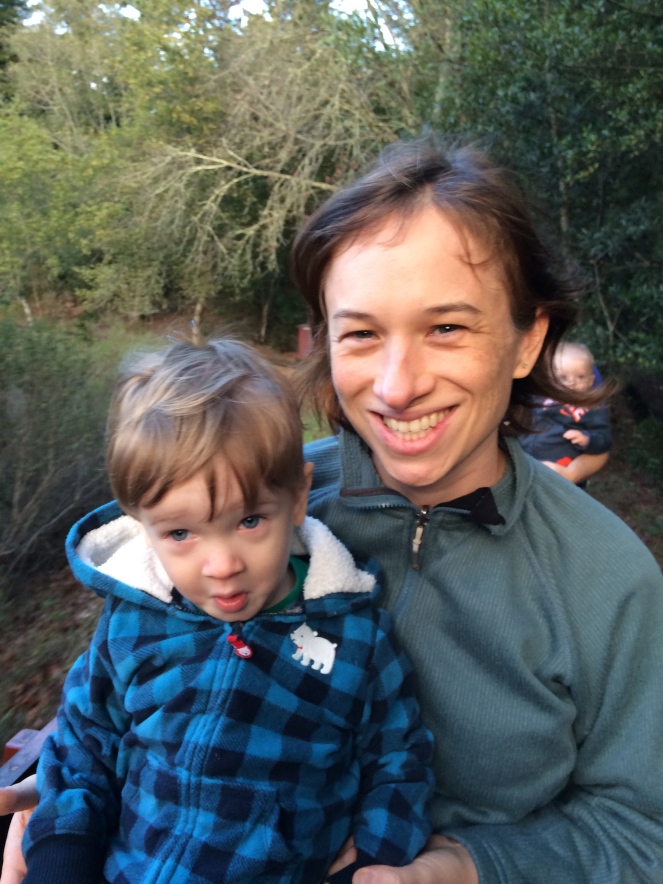 We visited another friend and toured the Jelly Belly factory together. Ari actually really enjoyed looking through the windows down into the factory, and he cried every time we had to move on to the next window. 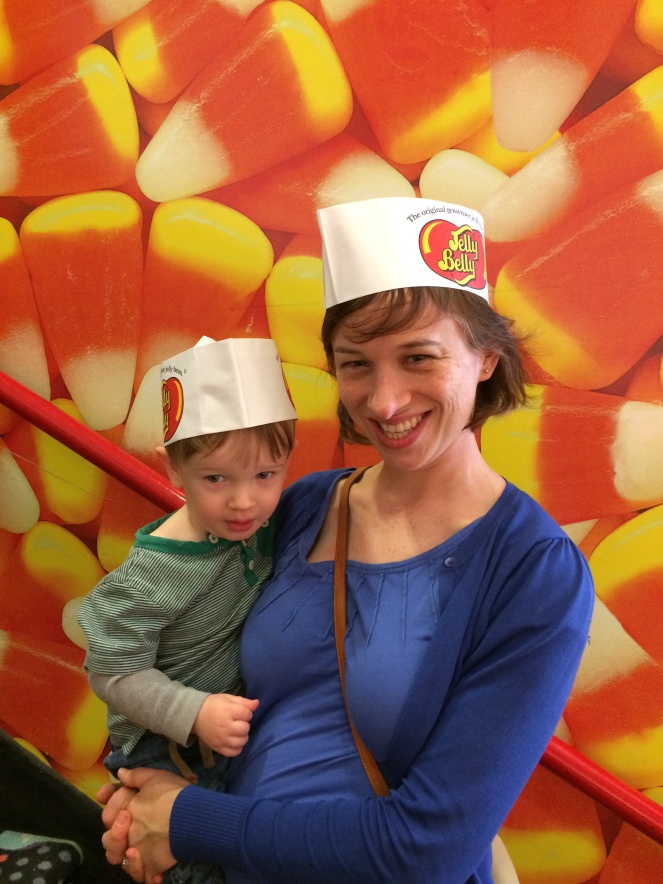 Checking out our airplane: 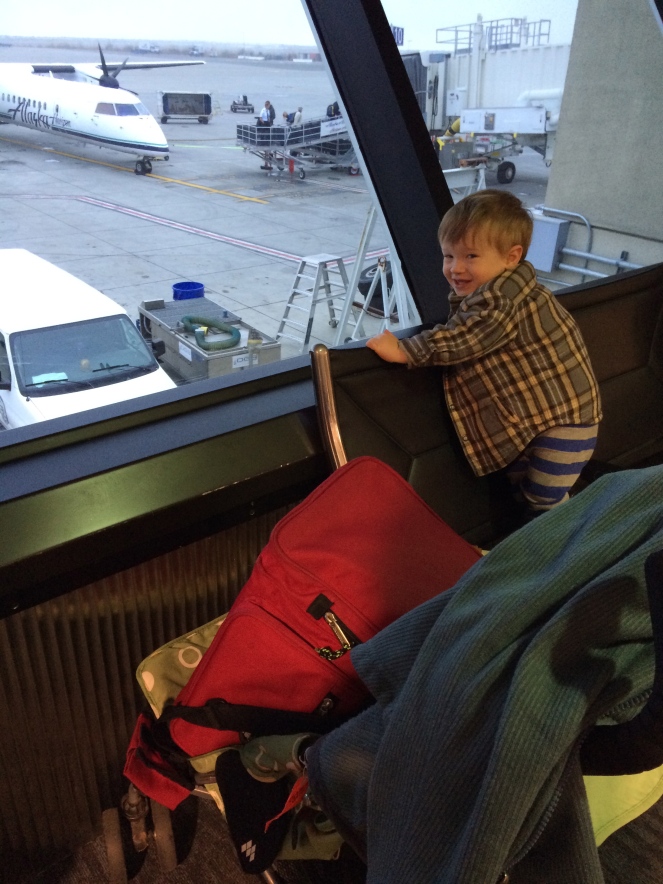 Back in Portland, on the MAX train from the airport: 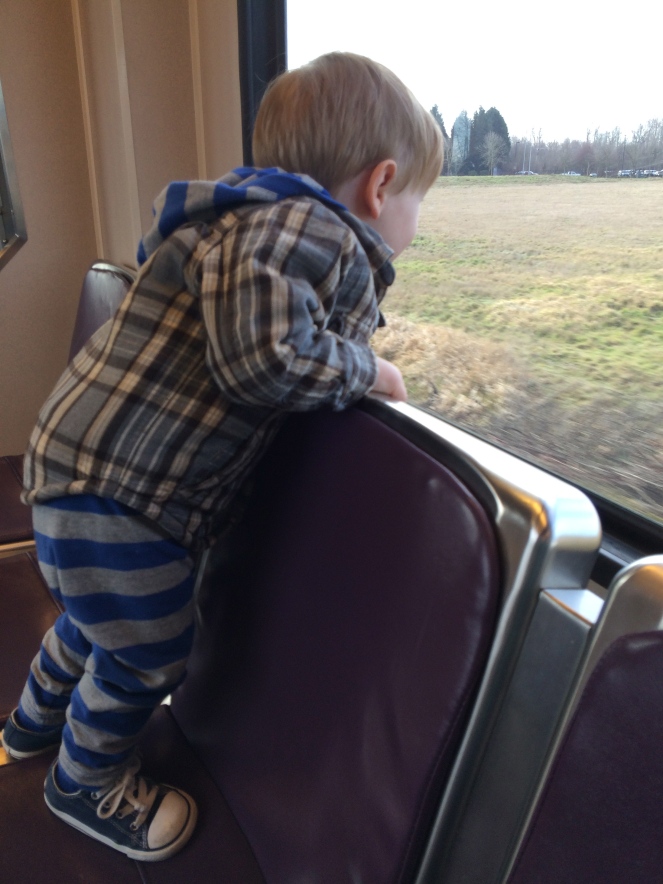 We took the train all the way downtown for lunch with Daddy and to get the car from him to drive home. Ari was very excited to “Run! Run! Run! Run!” in the square. 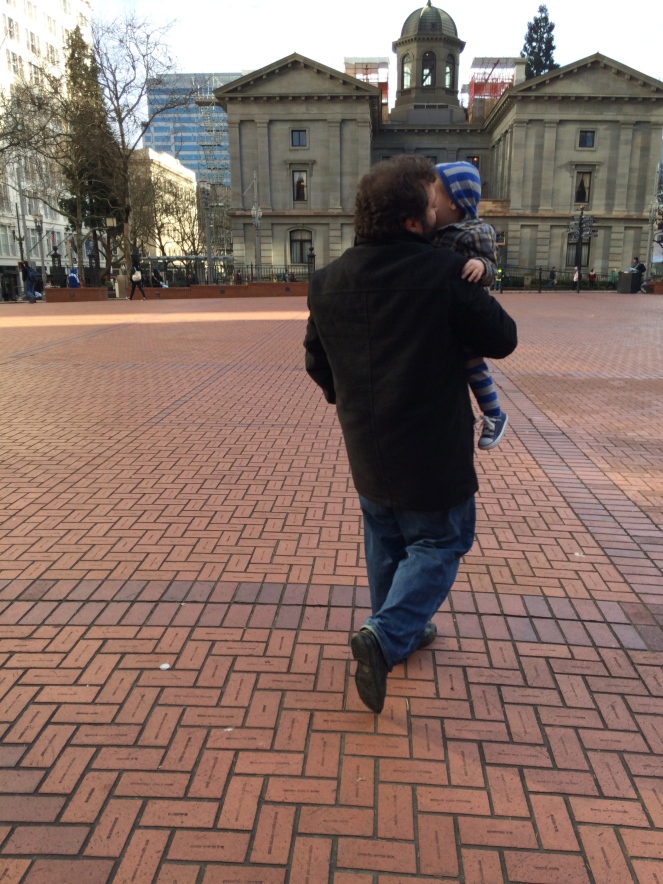 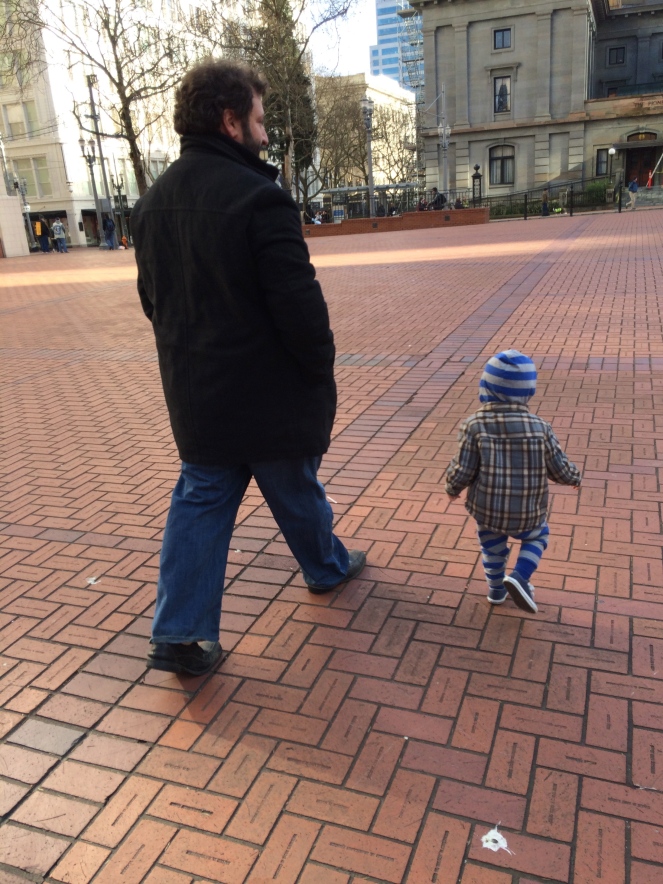 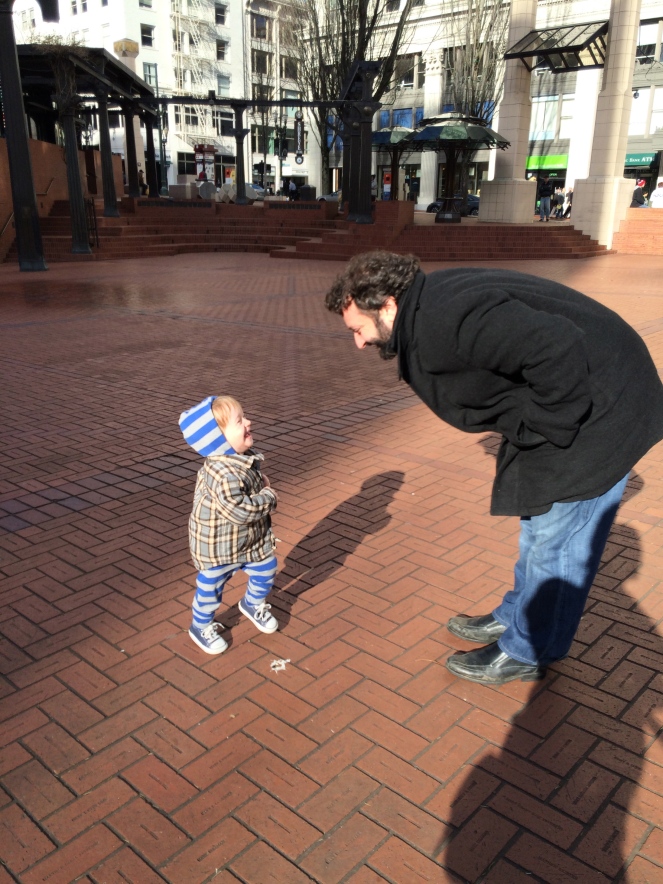 He LOVES feeding treats to the dog and begs for them constantly: 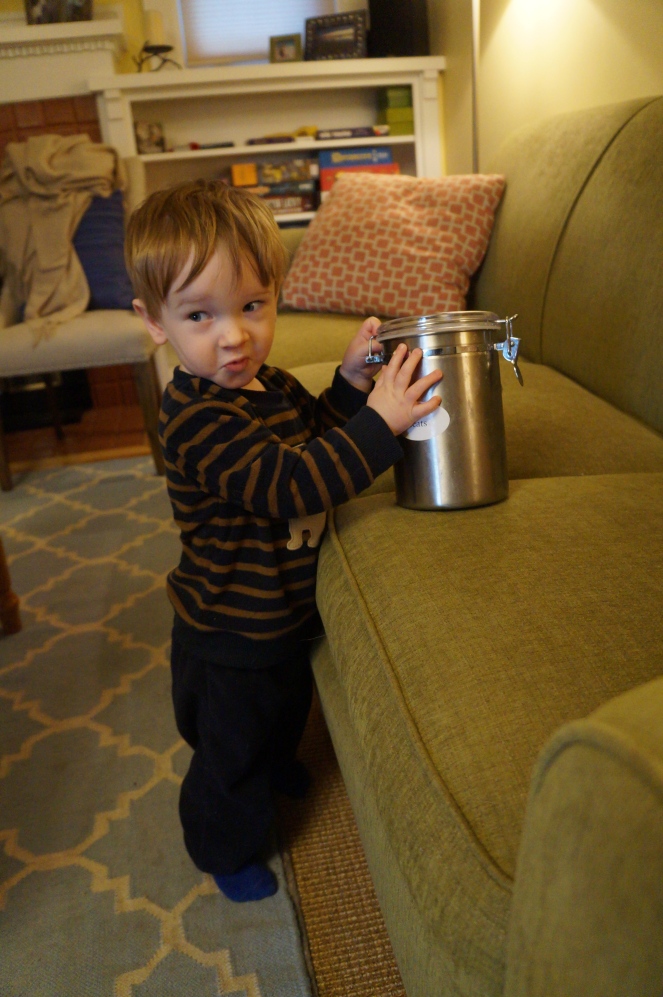 Toddlerhood is a new frontier with new challenges and joys for all of us, but he’s still a happy, silly guy! 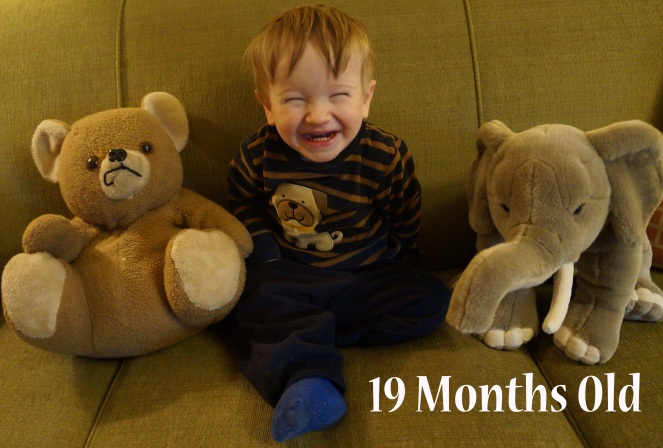 One thought on “Ari, 19 Months Old and First Trip to California”